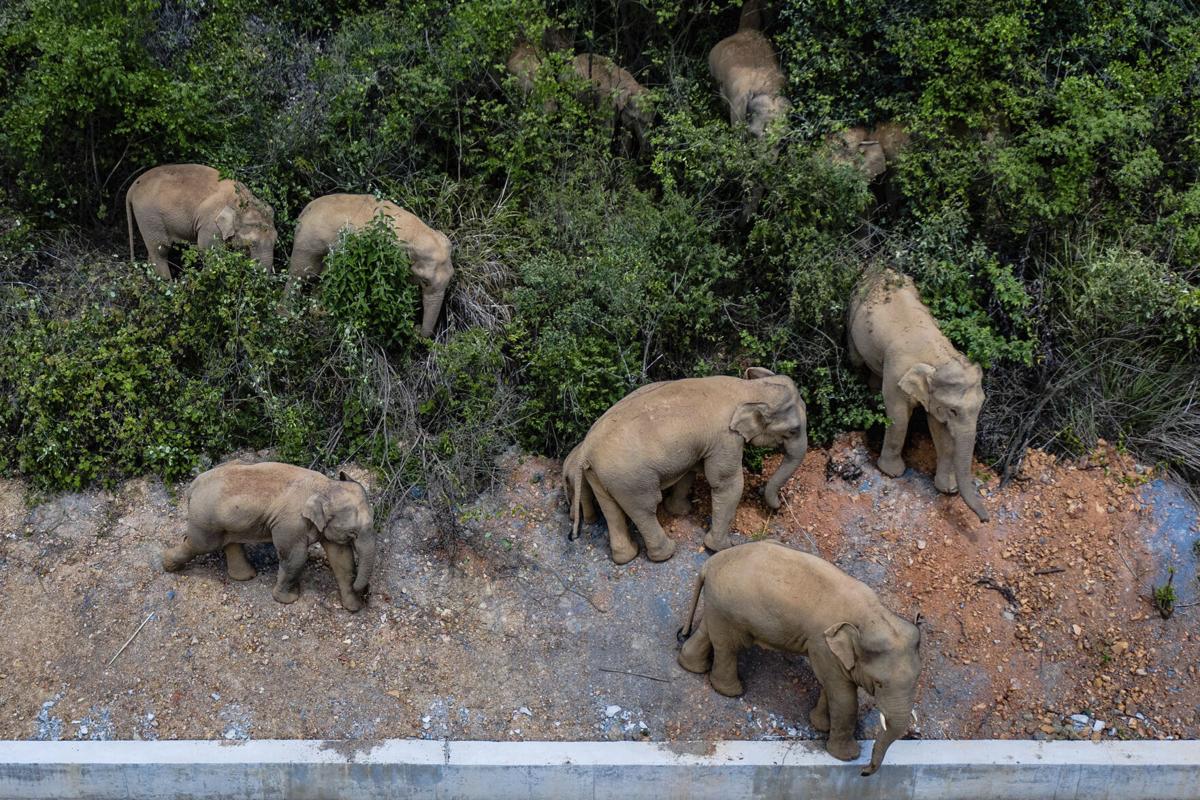 A herd of wild Asian elephants on May 28, 2021, stands in E’shan county in southwestern China’s Yunnan Province. A herd of 15 wild elephants that walked 300 miles from a nature preserve in China’s mountainous southwest were approaching the major city of Kunming on Wednesday, June 2, as authorities rushed to try to keep them out of populated areas. 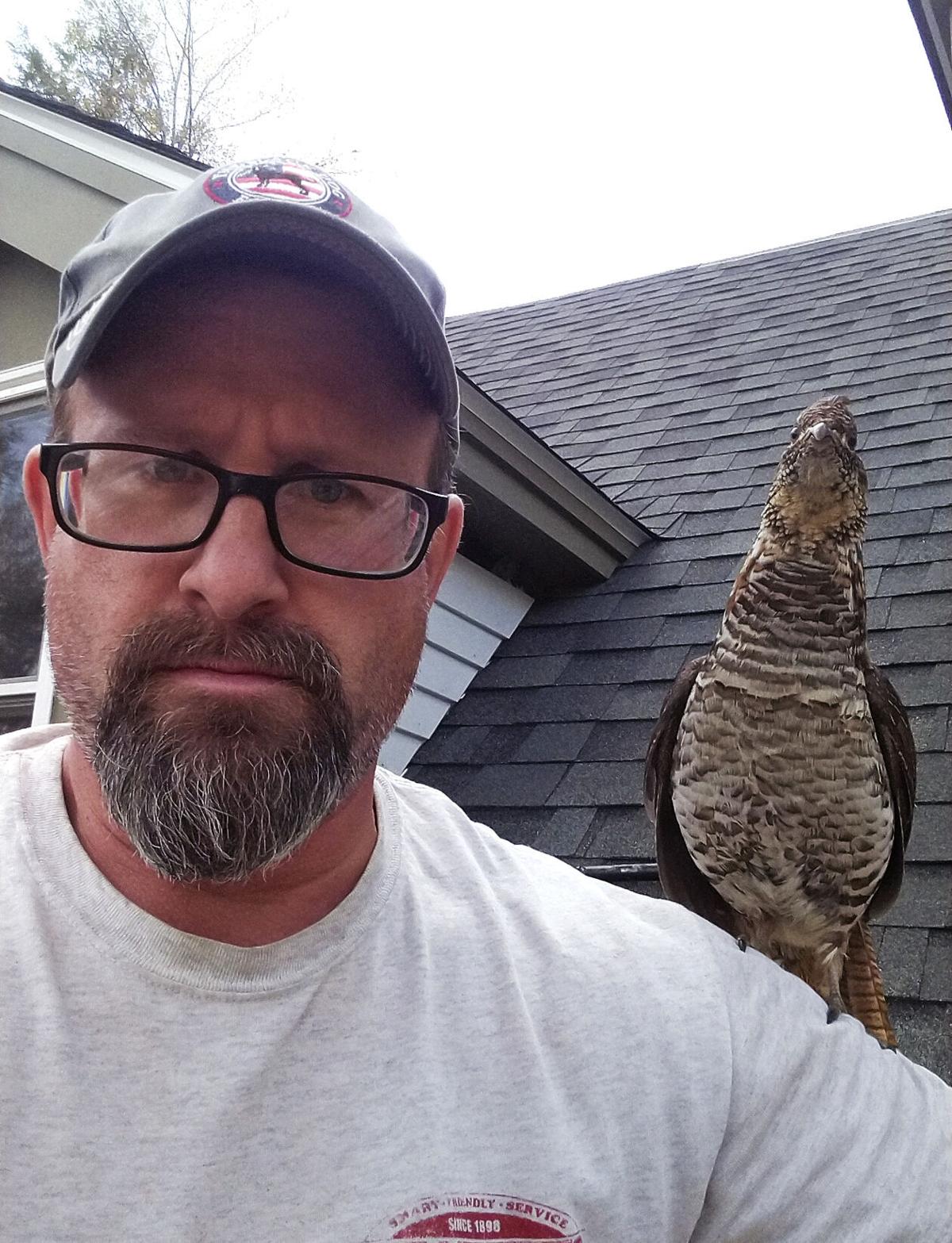 In this recent photo in 2021, a wild grouse perches on the shoulder of Todd Westward outside his New London, New Hampshire home. The bird started hanging out in the family's backyard in April and made itself a friendly fowl fixture in their yard. The family named the bird Walter.

A herd of wild Asian elephants on May 28, 2021, stands in E’shan county in southwestern China’s Yunnan Province. A herd of 15 wild elephants that walked 300 miles from a nature preserve in China’s mountainous southwest were approaching the major city of Kunming on Wednesday, June 2, as authorities rushed to try to keep them out of populated areas.

In this recent photo in 2021, a wild grouse perches on the shoulder of Todd Westward outside his New London, New Hampshire home. The bird started hanging out in the family's backyard in April and made itself a friendly fowl fixture in their yard. The family named the bird Walter.

BEIJING — Elephants in a wandering herd in southwest China walked down paved roads and poked their trunks through windows as they neared a city and authorities rushed to protect both animals and people.

It’s not clear why the 15 wild Asian elephants made their long trek from a nature reserve, a journey documented and monitored both on the ground and from the air by a dozen drones. Authorities have urged people in the area to stay indoors and are blocking roads with construction equipment while seeking to lure the animals away with food.

The elephants have already walked 300 miles from the reserve in Yunnan’s mountainous southwest. They appear healthy in images showing them roaming through farmland, villages and down paved roads at night in urban areas.

One city along their route, Yuxi, deployed hundreds of trucks along a road to discourage the herd from approaching, the Beijing News reported. Drivers ate and slept in the vehicles for days, even as they heard the elephants moving about after dark, the newspaper said in a video clip posted online.

On Tuesday, June 1, they turned up at a retirement home and poked their trunks into some of the rooms, prompting one elderly man to hide under his bed, according to residents interviewed by online channel Jimu News.

The Xinhua News Agency reported on June 3 that the herd by late night June 2 had reached the Jinning district on the edge of Kunming, a city of 7 million people that is the capital of Yunnan province.

The government of the semi-rural district issued a notice urging residents not to leave corn or other food out in their yards that might attract the animals and to avoid contact with them.

It was “forbidden to surround and gawk at the elephants” or to disturb them by using firecrackers or other materials, the notice said.

Sixteen animals were originally in the group, but the government says two returned home and a baby was born during the walk. The herd is now composed of six female and three male adults, three juveniles and three calves, according to official reports.

No injuries have been reported, but reports say the elephants have damaged or destroyed more than $1 million worth of crops.

When and how the elephants will be returned to the reserve isn’t clear.

Elephants are the largest land animals in Asia and can weigh up to 5 tons.

OMAHA, Neb. — A prosecutor and a defense attorney in Nebraska have been reprimanded for a scheme reminiscent of the Wild West in which they told two convicted criminals to get out of town and never return.

Under the plan brokered by Wickham and Bowers, the defense attorney advised his clients, who had been charged with felonies, to plead guilty then flee the state before sentencing, with the understanding that they would not return.

Bowers, the prosecutor, agreed that if the men skipped out on their sentencing hearings and left the state, he would direct the county sheriff to not seek extradition to have them returned to Custer County, the high court said. Wickham and Bowers also schemed to seek a low bail for the men, so they could be freed before the sentencing hearings.

The court’s reprimand orders don’t reveal the names of the men who were charged, what charges they pleaded to or when the scheme was carried out.

In the reprimand order against Bowers, the high court said at least one of the men fled Custer County before his sentencing hearing and was later arrested about 200 miles away near Omaha. Bowers did not seek to extradite the man to Custer County, and he was released from custody, the court said. The court did not say what happened to the other man.

Bowers and Wickham both filed responses with the Nebraska Counsel for Discipline conditionally admitting the violations and waiving any challenges to the accusations in exchange for the reprimands.

NEW LONDON, N.H. — Some people are greeted by the family dog. For Todd Westward, it’s a ruffed grouse.

The bird started hanging out in the New London, New Hampshire, backyard in April with Westward while his family was away on a trip, his wife, Mary Beth Westward, posted on Facebook. Since then, the bird, which they named Walter, has made himself a fixture in the yard.

“I just thought it was a fluke before we left,” Mary Beth Westward said May 28. “While we were gone, this bird formed this crazy attachment. He was here every single day, all day long, following him.”

Walter has perched on her husband’s shoulder and arm, and has visited his backyard work station.

Mary Beth Westward said she’s gotten a lot of positive comments from her post, and heard some similar stories about social grouses.

She said she and the couple’s daughters don’t have the same bond with Walter. He appears to chase them away.

“He runs like a feathered velociraptor while he chases us down the driveway in our cars. And he goes back up and sits on the porch and pretends to be our watch-bird,” Westward wrote in her post.

The ruffed grouse is the state bird in Pennsylvania. The “tame” grouse phenomenon happens in the spring, during the peak breeding season, according to a video last year from the Pennsylvania Game Commission. One theory is that the grouse is acting hyper-territorial.

Paris Jackson thinks her dad would be proud of her