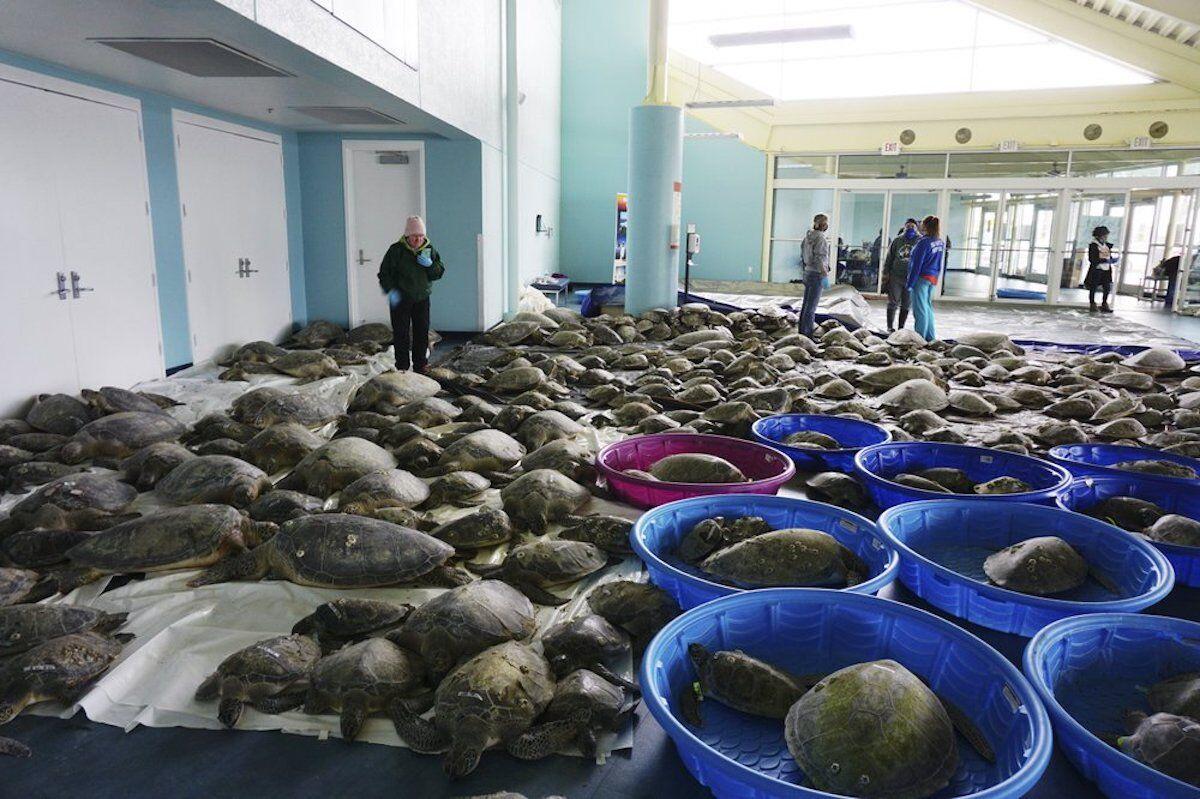 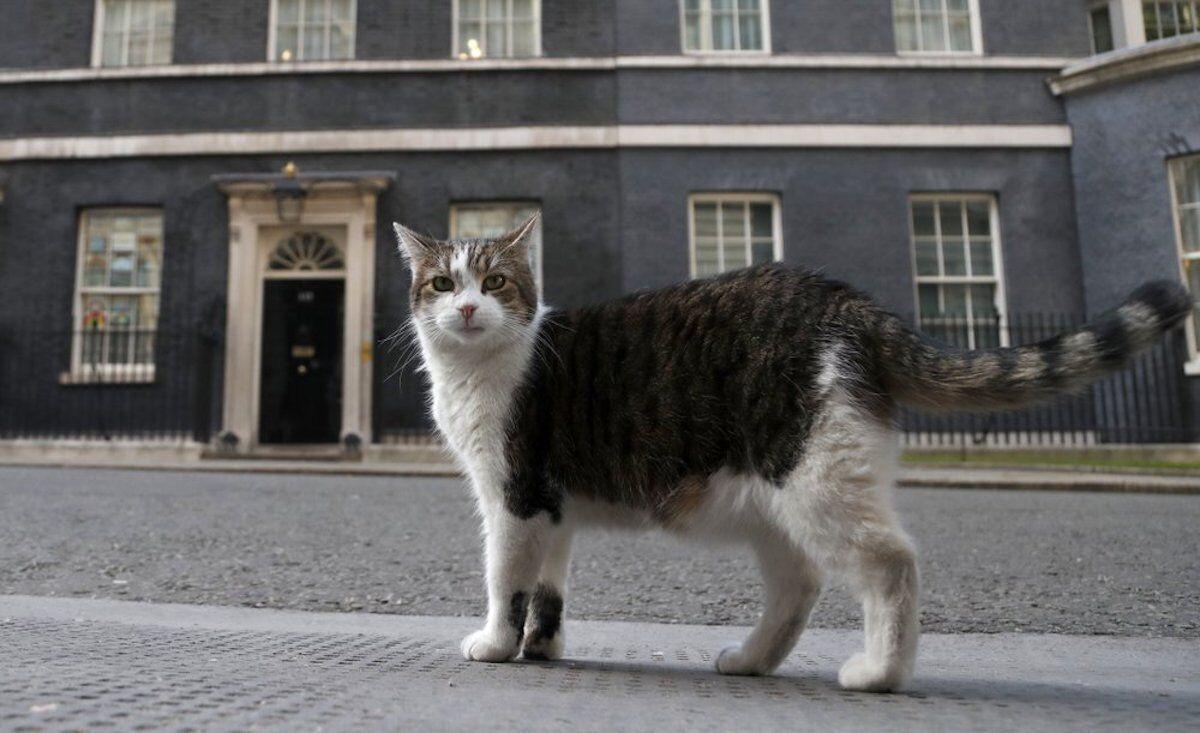 In this May 21, 2020 photo, Larry, the official 10 Downing Street cat, walks outside 10 Downing Street before the nationwide Clap for Carers to recognize and support National Health Service workers and carers fighting the coronavirus pandemic in London. Monday, Feb. 15, 2021, marked the 10th anniversary of rescue cat Larry becoming Chief Mouser to the Cabinet Office in a bid to deal with a rat problem at 10 Downing Street.

In this May 21, 2020 photo, Larry, the official 10 Downing Street cat, walks outside 10 Downing Street before the nationwide Clap for Carers to recognize and support National Health Service workers and carers fighting the coronavirus pandemic in London. Monday, Feb. 15, 2021, marked the 10th anniversary of rescue cat Larry becoming Chief Mouser to the Cabinet Office in a bid to deal with a rat problem at 10 Downing Street.

Thousands of cold-stunned sea turtles being rescued in Texas

SOUTH PADRE ISLAND, Texas — Residents, some of whom lack heat or basic amenities in their own homes due to the unusually chilly weather, have been rescuing cold-stunned sea turtles and taking them to a convention center in a South Texas resort town.

“Every 15 minutes or less there’s another truck or SUV that pulls up,” Ed Caum, executive director of the South Padre Island Convention and Visitors Bureau, told The Associated Press on Wednesday, Feb. 17.

He said sometimes people bring one or two sea turtles, sometimes more. “We had trailers full (Tuesday) coming in that had 80, 100, 50,” he said.

The South Padre Island Convention Center started pitching in Monday when its neighbor, Sea Turtle Inc., could no longer handle the number of sea turtles being dropped off, and their mostly outdoor operation had lost power. He said the convention center itself didn’t have power or water till early Wednesday morning.

He says they’ve “collected” more than 3,500 sea turtles so far. He said he hesitates to use the word rescued because “we know we’re going to lose some.”

Caum said that with another cold front approaching, they don’t know when they’ll be able to return the sea turtles to the water.

Temperatures in the area on Wednesday afternoon were in the 40s. He said it may be Saturday — when temperatures are expected to reach the low 60s — before the turtles can be released back into the Gulf.

He said with power returned they have been able to bring the convention center’s temperature to 60 degrees.

“We’re trying to do the best we can to save as many turtles as possible,” he said.

LONDON — Larry the cat, a four-legged inhabitant of London’s 10 Downing St., marked a decade as Britain’s mouse-catcher in chief on Monday, Feb. 15.

The tabby cat was recruited by then-Prime Minister David Cameron to deal with a pack of rats seen scuttling close to the British leader’s official residence, and entered Downing Street on Feb. 15, 2011.

The former stray, adopted from London’s Battersea Dogs and Cats Home, was given the title Chief Mouser to the Cabinet Office, an unofficial pest control post. He was the first cat to hold the rat-catching portfolio since the retirement of Humphrey in 1997, and has loyally served three prime ministers.

But it seems like yesterday that Larry was just another cat — as opposed to a media superstar — said Lindsey Quinlan, the head of cattery of Battersea.

“Throughout his time at No.10, Larry has proven himself to not only be a brilliant ambassador for Battersea but also demonstrated to millions of people around the world how incredible rescue cats are,’’ she said. “His rags to riches tale is yet more proof of why all animals deserve a second chance — one minute they may be an overlooked stray on the streets, the next they could become one of the nation’s beloved political figures, with fans around the world.”

Larry, who has met a number of world leaders, has been largely unfriendly to men but took a liking to former U.S. President Barack Obama. When former President Donald Trump visited in 2019, Larry took a nap under his car.

His grip on the public imagination is clear — and political leaders know better than to ignore that popularity. The tomcat was a sentimental topic of conversation in Cameron’s final appearance in Parliament as prime minister when he said he wanted to quash a rumor that — perish the thought — he didn’t like Larry.

And just to prove it, he whipped out evidence: a picture of Larry lying on his lap.

“He belongs to the house and the staff love him very much — as do I,” he said at the time, explaining why he wasn’t taking Larry with him after leaving office.

After the December 2019 election, rumors swirled that Larry might be headed for retirement with the news the new prime minister, Boris Johnson, was a dog man.

Reports of his rodent-killing abilities vary. Larry became known for his occasional scraps with neighboring cats — especially Palmerston, chief mouser to the Foreign Office across the street — and fondness for sleep. Palmerston has retired to the country, so things have been a bit quieter of late.

These days Larry, now 14, often is seen by photographers patrolling his turf.

Visitors to the building can sometimes find him napping on a ledge above a radiator or sleeping on a floor, where dignitaries occasionally have to step over him. At the heart of government, he specializes in power naps.

The Lincoln Project is imploding. Here's why.

A fiery Lady Day in 'U.S. vs. Billie Holiday'