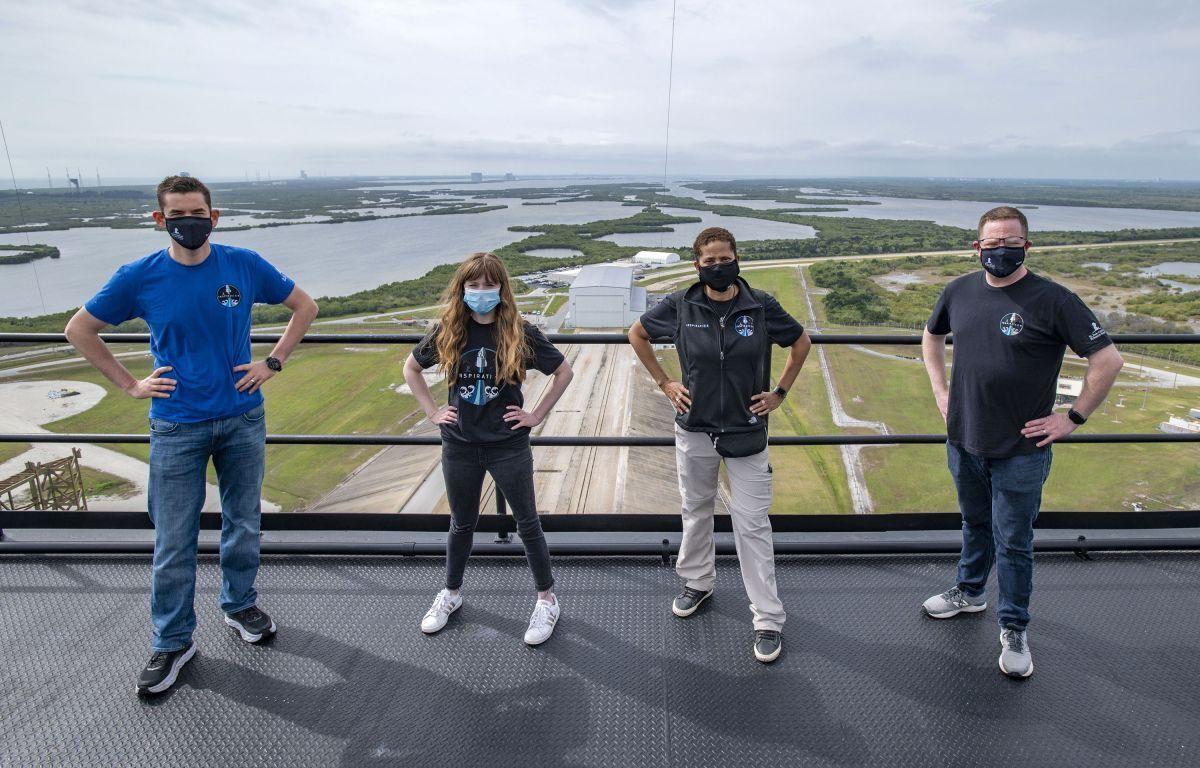 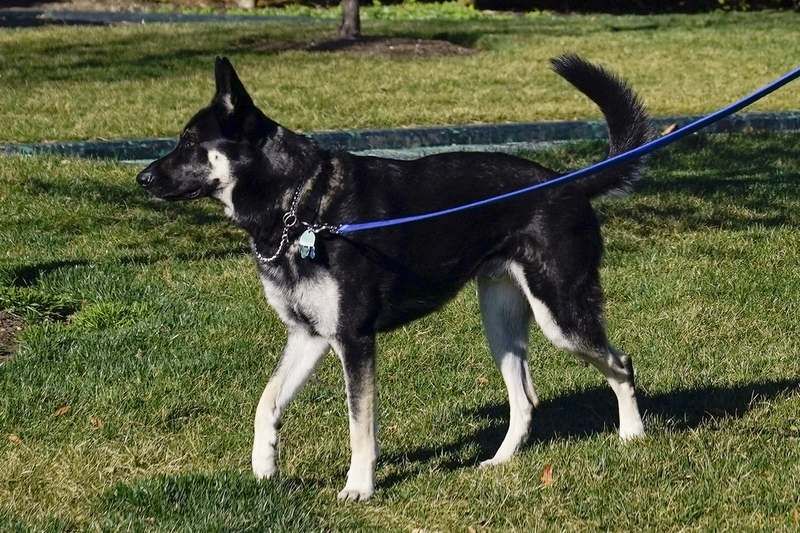 A handler walks Major, one of President Joe Biden and first lady Jill Biden's dogs, Monday, March 29, 2021, on the South Lawn of the White House in Washington. 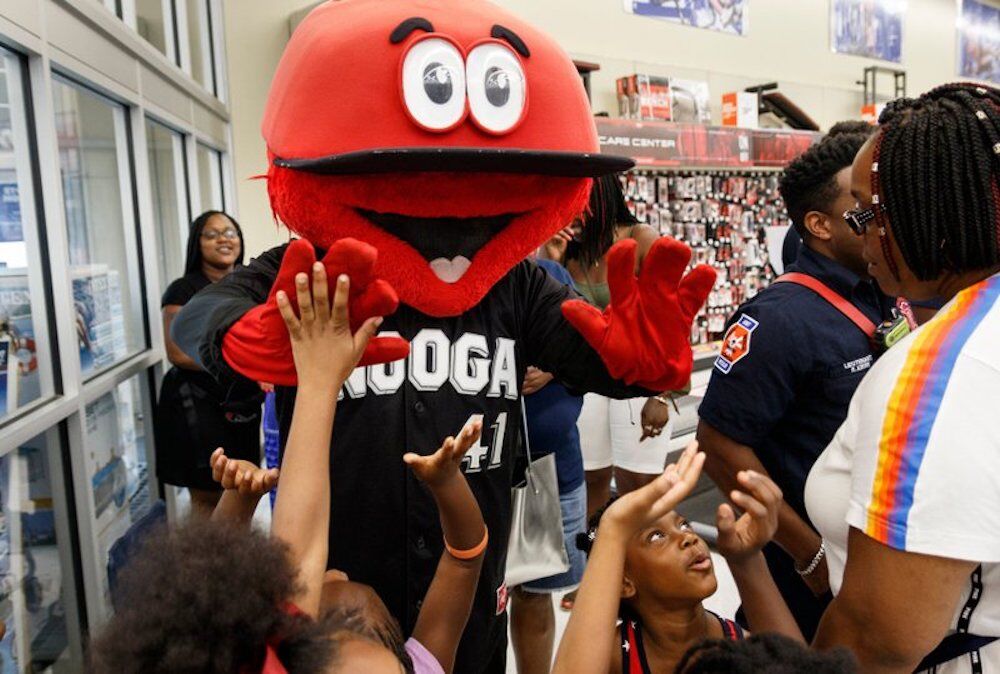 Children from the YMCA Westside and Salvation Army high-five Looie the Lookout on July 18, 2019, before a shopping spree at Academy Sports and Outdoors in Chattanooga, Tennessee. The Chattanooga Lookouts announced Wednesday, March 31, 2021, on Twitter that the costume for Looie the Lookout has been returned home safe. The team told authorities the mascot’s costume was stolen from an office at AT&T Field on Tuesday, along with hundreds of dollars in merchandise and equipment.

A handler walks Major, one of President Joe Biden and first lady Jill Biden's dogs, Monday, March 29, 2021, on the South Lawn of the White House in Washington.

Children from the YMCA Westside and Salvation Army high-five Looie the Lookout on July 18, 2019, before a shopping spree at Academy Sports and Outdoors in Chattanooga, Tennessee. The Chattanooga Lookouts announced Wednesday, March 31, 2021, on Twitter that the costume for Looie the Lookout has been returned home safe. The team told authorities the mascot’s costume was stolen from an office at AT&T Field on Tuesday, along with hundreds of dollars in merchandise and equipment.

CAPE CANAVERAL, Fla. — A billionaire's private SpaceX flight filled its two remaining seats Tuesday with a scientist-teacher and a data engineer whose college friend actually won a spot but gave him the prize.

The new passengers: Sian Proctor, a community college educator in Tempe, Arizona, and Chris Sembroski, a former Air Force missileman from Everett, Washington. They will join flight sponsor Jared Isaacman and another passenger for three days in orbit this fall.

Isaacman also revealed some details about his Inspiration4 mission, as the four gathered Tuesday at NASA's Kennedy Space Center. He's head of Shift4 Payments, a credit card-processing company in Allentown, Pennsylvania, and is paying for what would be SpaceX's first private flight while raising money for St. Jude Children's Research Hospital in Memphis, Tennessee.

The capsule will be outfitted with a domed window in place of the usual space station docking mechanism for their trip.

Isaacman, 38, a pilot who will serve as spacecraft commander, still won't say how much he's paying. He's donating $100 million to St. Jude, while donors so far have contributed $13 million, primarily through the lottery that offered a chance to fly in space.

Hayley Arceneaux, 29, was named to the crew a month ago. The St. Jude physician assistant was treated there as a child for bone cancer.

That left two capsule seats open. Proctor, 51, beat out 200 businesses and nabbed the seat reserved for a customer of Isaacman's company. An independent panel of judges chose her space art website dubbed Space2inspire.

"It was like when Harry Potter found out he was a wizard, a little bit of shock and awe," Proctor told The Associated Press last week. "It's like, 'I'm the winner?'"

Sembroski, 41, donated and entered the lottery but wasn't picked in the random drawing earlier this month — his friend was. His friend declined to fly for personal reasons and offered the spot to Sembroski, who worked as a Space Camp counselor in college and volunteered for space advocacy groups.

"Just finding out that I'm going to space was an incredible, strange, surreal event," he said.

He's about to start a new job at Lockheed Martin and admits it will be a balancing act over the next six months, as the crew trains.

Isaacman insists they won't cut any corners as they prepare for launch.

"You don't go up on Everest, right, after just a hike in the backyard. You build your way to it," he told reporters.

Proctor, who studied geology, applied three times to NASA's astronaut corps, coming close in 2009, and took part in simulated Mars missions in Hawaii. She was born in Guam, where her late father — a "Hidden Figure" in her mind — worked at NASA's tracking station for the Apollo moonshots, including Neil Armstrong and Buzz Aldrin's.

She plans to teach from space and create art up there, too.

"To me, everything that I've done ... has brought me to this moment."

The dog "nipped someone while on a walk" on Monday, said Michael LaRosa, press secretary to first lady Jill Biden, adding the dog "is still adjusting to his new surroundings." The individual was seen by the White House Medical Unit "out of an abundance of caution" and returned to work without injury, LaRosa added.

The dog had been seen by reporters on a walk around the White House South Lawn before the president and first lady traveled to the Vietnam Veterans Memorial early Monday evening.

The German shepherd only just returned to the White House last week, along with his sibling Champ, after causing a minor injury to an employee of the U.S. Secret Service on March 8.

After that incident, the president said Major was "a sweet dog." In an interview with ABC News, Biden explained the biting by saying that the dog had "turned a corner, there's two people he doesn't know at all, you know, and they move and moves to protect."

Biden added at the time that "85% of the people there love him."

Major, a 3-year-old rescue dog, and Champ, who is 12, were moved to the Bidens' Delaware home after the incident. The president said Major was being trained in Delaware but disputed the idea that the pup had been sent away after the incident. He said the dogs went to Wilmington because the first couple was going to be out of town.

The dogs met the Bidens two weekends ago at Camp David in Maryland and came back to Washington on March 21. Last week, one of the two German shepherds waited on the balcony of the White House as Marine One landed on the South Lawn, having ferried the president back from a speech in Columbus, Ohio.

"The dogs will come and go and it will not be uncommon for them to head back to Delaware on occasion as the president and first lady often do as well," said White House press secretary Jen Psaki.

This week's biting incident was first reported by CNN.

Looie the Lookout costume back with Tennessee baseball team

CHATTANOOGA, Tenn. — A minor league baseball team in Tennessee has its mascot back a day after it was reported stolen from a ballpark.

The Chattanooga Lookouts announced Wednesday, March 31, on Twitter that the costume for Looie the Lookout "has been returned home safe."

Chattanooga Police spokeswoman Elisa Myzal said in an email that an employee of a nearby aquarium found the costume near the team's stadium.

The Lookouts told authorities the mascot's costume was stolen from an office at AT&T Field on Tuesday, according to a Facebook post from Chattanooga police. Looie's head looks like a big red baseball cap, with a black brim for a nose.

The Lookouts said hundreds of dollars in merchandise and equipment also were stolen. Myzal said none of that property has been returned or located. She said police are reviewing security cameras in the area.

The Lookouts kick off their season at home on May 4.