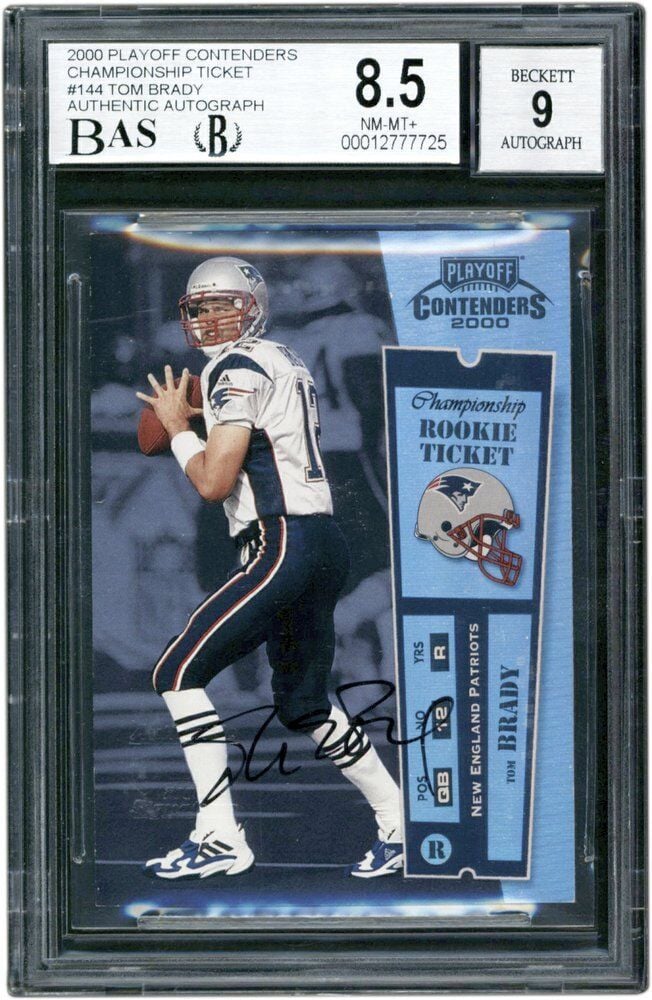 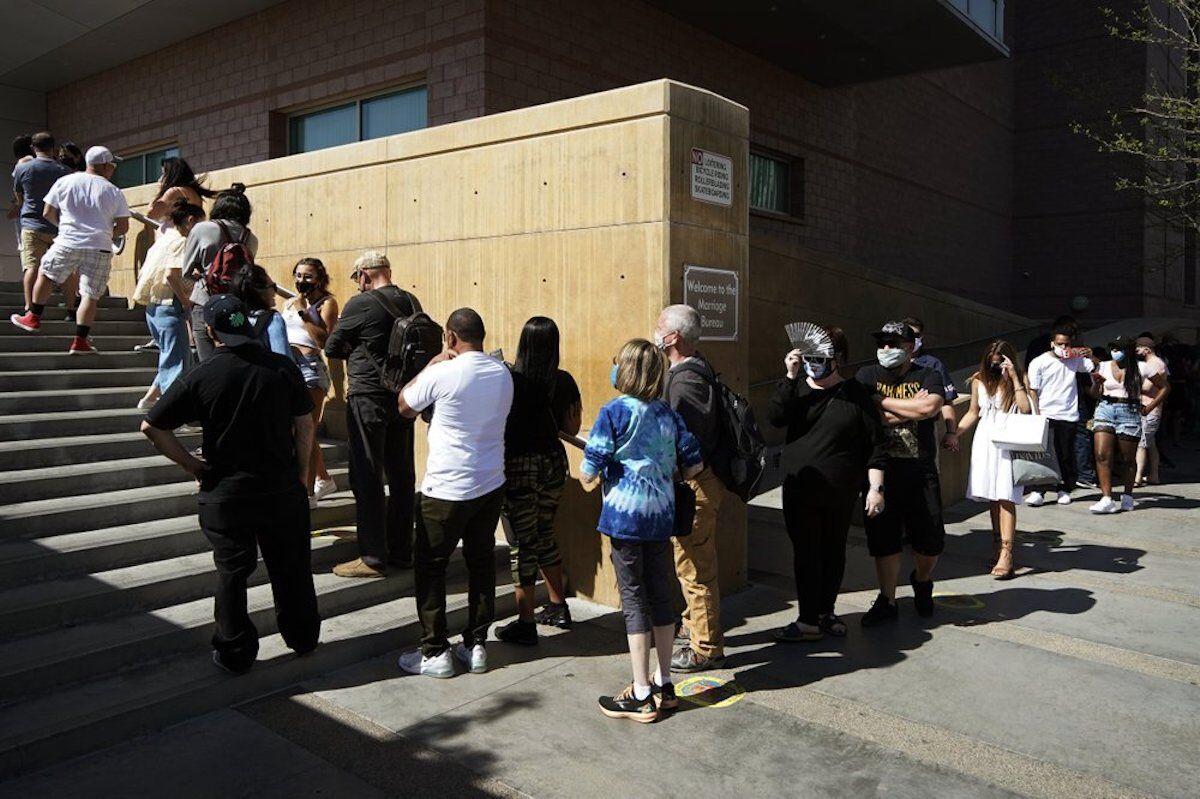 People wait in line for marriage licenses at the Marriage License Bureau, Friday, April 2, 2021, in Las Vegas. The bureau was seeing busier than normal traffic ahead of 4/3/21, a popular day to get married in Las Vegas.

NEW YORK — Quarterback Tom Brady is proving he’s the GOAT not just on the football field but also in the collectibles market: A rookie football card just sold for $2.25 million.

The card was signed by the GOAT, a common reference to Brady that stands for "greatest of all time."

The price fetched Friday night, April 2, through online sports auction house Lelands broke a football card record that was previously held by Brady. Another of his rookie cards sold for $1.32 million on PWCC Marketplace last month.

"Tom Brady continues to shatter records both on and off the football field," Lelands President Mike Heffner said in a statement.

He continued his winning ways after parting from the Patriots in 2020 and joining the Tampa Bay Buccaneers. He earned his seventh Super Bowl win when the Buccaneers beat the Kansas City Chiefs earlier this year.

LAS VEGAS — Soon-to-be newlyweds lined up out the door of the marriage license office in Las Vegas on Friday, ahead of a unique date to tie the knot: 4/3/21.

Nearly 700 couples obtained licenses for the Saturday date, said Jeff Klein, a spokesperson for the Clark County Marriage Bureau, as the city where Elvis can be part of the wedding party got set to mark yet another quirky date for nuptials. The clerk’s office marked the occasion with keepsake marriage certificates.

April is usually busy for weddings, and past dates with notable numeric sequences have tallied more than 1,000 weddings in a day, Goya said.

The office is bracing for a busy first 10 days this December, offering what the clerk dubs "palindrome days" for numbers reading the same forward and backward.

The most popular date to date?

MMA fighter has finger severed in match; doctors reattach it

PHILADELPHIA — A mixed martial arts fighter had his finger severed during a match in Philadelphia, but doctors were eventually able to reattach it.

Khetag Pliev was injured Thursday night, April 1, during the second round of his fight, which was stopped when the referee noticed Pliev was missing his left ring finger.

"In the second round, he (opponent Devin Goodale) caught my glove with one hand and held it," Pliev told ESPN. "I felt my finger snapped. He kept pulling my glove and my finger snapped. We kept fighting. When the second round was finished, I see my (bone) was out in the open. I wanted to keep fighting, because I felt like I had this guy. But the doctor saw that and stopped the fight. "

Event promoter Rob Haydak told ESPN that officials began searching inside the cage where the match was held, and an announcement was made to the crowd, asking them to look for it also.

After several minutes, the finger was ultimately discovered inside Pliev’s glove, Haydak said.

"It was crazy," Haydak told ESPN. "He didn’t even flinch. He was getting ready to do the (official) decision and I was like, ‘Uh, guys, get him out of the cage and go put his finger back on.’"

Pliev was taken to a hospital where the finger was reattached. He said the doctor told him he tore 50% of the tendon on the finger, and he may need another procedure.

His opponent, Goodale, was ruled the winner by TKO.

Pliev, though, said he will appeal the decision to the Pennsylvania State Athletic Commission, claiming Goodale illegally grabbed his gloves during the bout.

Pliev, 37, is a native of Russia who competed in the 2012 Olympics as a wrestler for Canada.

Every day Is Earth Day for dairy farmers