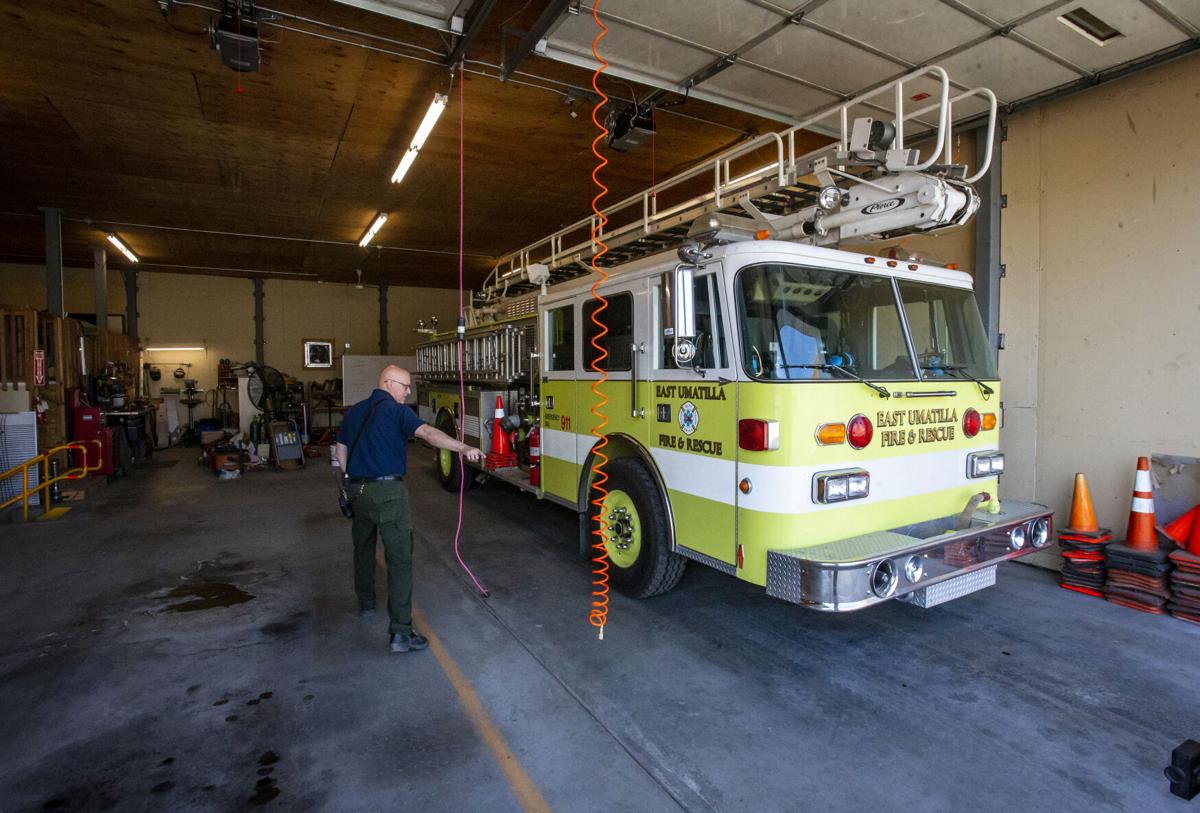 East Umatilla Fire & Rescue Fire Chief David Baty explains issues with backing fire trucks into the district’s Weston fire station on Wednesday, May 5, 2021. The primary issue is the steep angle of the driveway, which results in stress and twisting on the vehicles’ chassis and has caused vehicles to scrape the concrete if not backed perfectly. 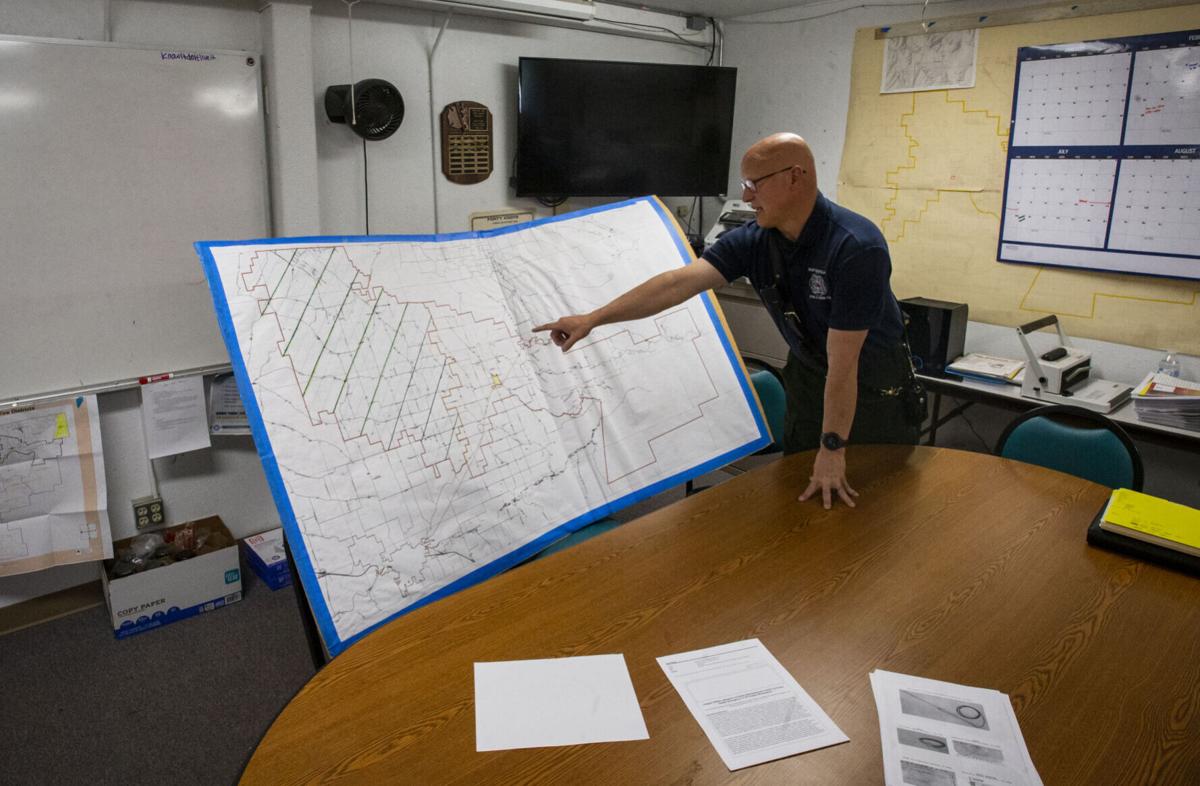 East Umatilla Fire & Rescue Fire Chief David Baty indicates on a map how the fire district has grown over the years during a tour of the Weston station on Wednesday, May 5, 2021.

East Umatilla Fire & Rescue Fire Chief David Baty explains issues with backing fire trucks into the district’s Weston fire station on Wednesday, May 5, 2021. The primary issue is the steep angle of the driveway, which results in stress and twisting on the vehicles’ chassis and has caused vehicles to scrape the concrete if not backed perfectly.

East Umatilla Fire & Rescue Fire Chief David Baty indicates on a map how the fire district has grown over the years during a tour of the Weston station on Wednesday, May 5, 2021.

WESTON — Money from the American Rescue Plan could be a game changer for East Umatilla Fire & Rescue, according to Fire Chief David Baty.

As money from the federal stimulus package comes to Oregon, state senators are being given $4 million to allocate to a project in their district and state representatives are given $2 million. Baty said Sen. Bill Hansell, R-Athena, and Rep. Bobby Levy, R-Echo, are on board with allocating a portion of their funds to build a new fire station for the district.

The money should be enough to build the new station in Weston without going to taxpayers for more.

“It’s going to be close, but I think if we keep a real sharp pencil, we’ll be all right,” Baty said.

The station would serve as headquarters for East Umatilla Fire & Rescue, which covers about 420 square miles in eastern Umatilla County after three smaller districts merged in 2020. Baty said they already have the land to build it, a “shovel ready” parcel by the intersection of Bannister Road and Mill Street. They also have a design, which they modified slightly from Heppner’s fire station. It includes a handful of offices, a kitchen, storage space, a few dorms for firefighters visiting from the Oregon Department of Forestry and other partners, and parking for about eight rigs.

“We’re not trying to make the Taj Mahal,” Baty said. “We just want to make it plain and simple.”

The district’s current station is a hodgepodge building, the oldest section of which is now a century old. In one part, old jail cells hold storage items.

Baty says it feels embarrassing to show people around the station, given some of the accommodations. Firefighters don’t have real lockers to store their gear in, for example. Instead, they line them up in their designated section of a wall alcove directly behind a truck parking area. Baty has tried to protect the gear from the diesel fumes as much as possible by hanging clear plastic sheets in front of them.

One of the biggest problems with the current building is its location on a steep hill. One of the bays is extremely difficult to back into, Baty said, showing where a fire truck has to line up just right in order to twist around a sharp, banked turn. A bent railing and some scraped-up areas on the pole between garage doors bear testament to how difficult getting rigs into the station can be — particularly when it’s icy. It’s also bad for the trucks.

“It twists the chassis,” he said.

One thing Baty is proud of is the people serving the district. Baty is the district’s only paid firefighter and after a decades-long career working with paid firefighters, he said it has been extremely humbling to come to Weston and work alongside a crew of volunteers.

Hansell said it was Umatilla County Commissioner John Shafer who first introduced him to Baty about a year ago. He toured the fire station in Weston later, as did Levy. At the time, Hansell planned to back the fire station as a project in the capital construction bill, but then the American Rescue Plan allocation came up suddenly.

Hansell decided to dedicate all but $100,000 of his $4 million to the fire district, and Levy said she would dedicate half of her $2 million. The county volunteered to have its public works department do the labor for free for some needed road improvements, pushing the project to its $5.6 million estimated cost.

“I was thinking this money is like a bird in the hand, that I get to give out, and why not give it to a project I’m already committed to?” Hansell said.

He said he was impressed by the need for the project, but of course, there are many great projects in need of funding in his district. But one of the draws of the fire station was that Hansell wanted to give the money to a capital project that was shovel ready and could be completed with the just the ARP funds, instead of needing to spend time raising more money through other means.

It would also serve a very large area of his district, given the fire district’s size, including Hansell’s own hometown of Athena. And it fits in with the priorities of leadership in the Senate right now to bolster fire suppression and prevention, after Senate Republican Leader Fred Girod lost his own home to the wildfires in Southern Oregon last summer.

“This was the complete package,” Hansell said.

The money from the ARP will also come to the fire district in October, while the district would have to wait two years to receive funds if it were included in the capital construction bill.

Hansell plans to give the other $100,000 from the ARP funds to a wheat lab project at the Oregon State University experiment station in Adams. He is still lobbying for other other local projects to be included in this session’s capital construction bill, including the Umatilla County Jail renovation, Blue Mountain Community College’s Farm II project and the Wallowa Lake dam.