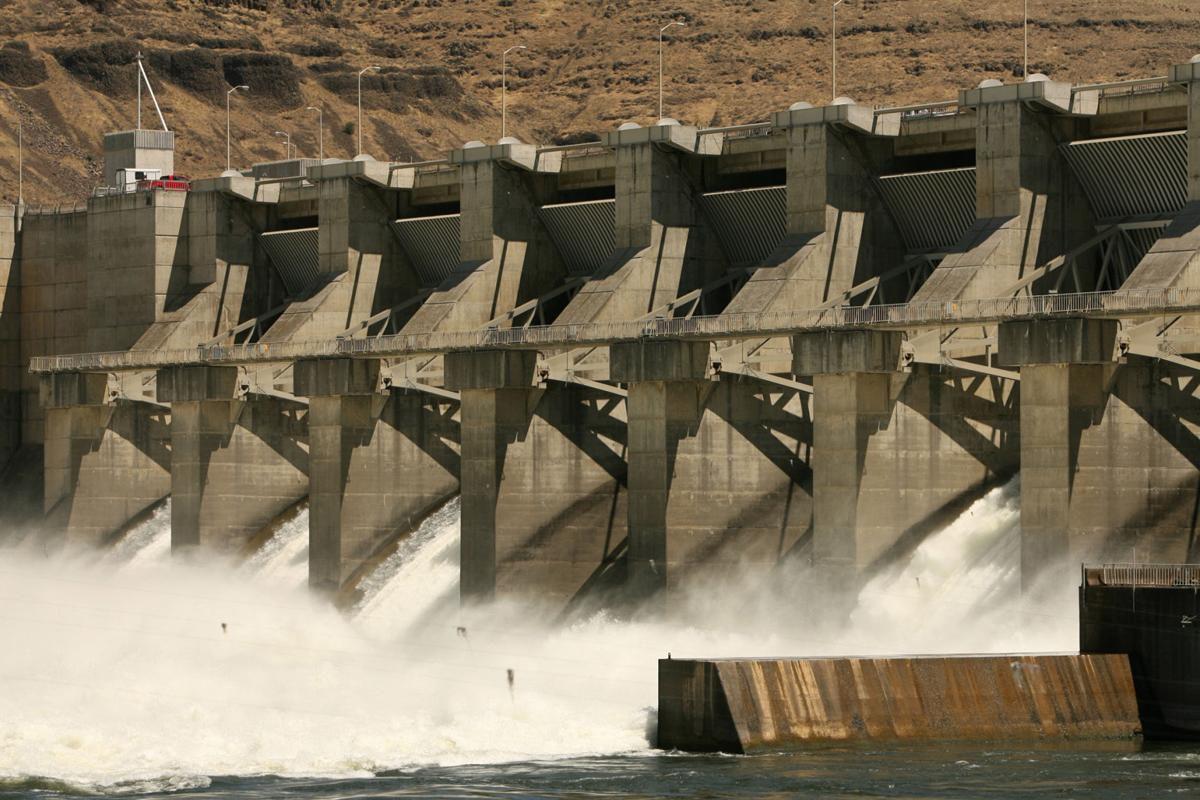 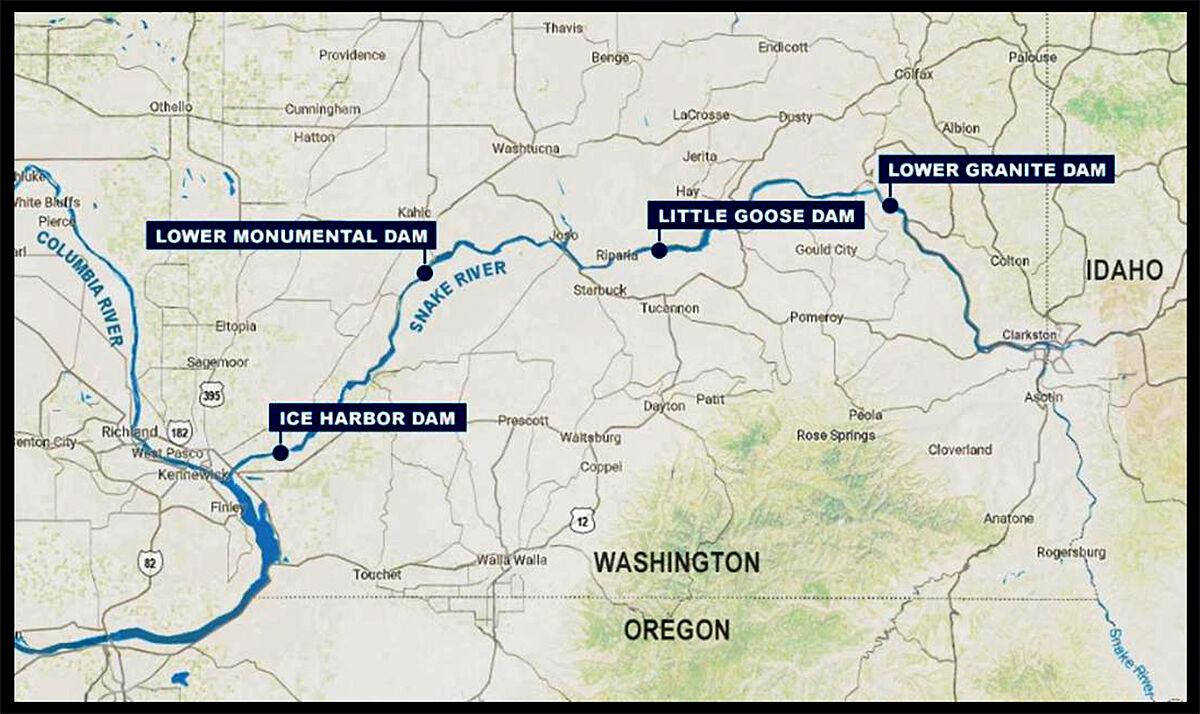 This map shows the locations of the four Lower Snake River dams. Idaho 2nd Congressional District Rep. Mike Simpson is calling for a program to remove the dams. 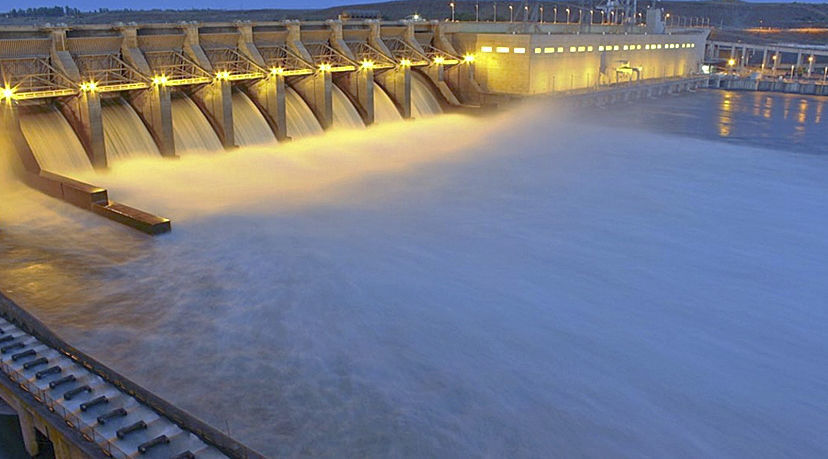 Ice Harbor Dam on the Lower Snake River holds back Lake Sacajawea, a source of irrigation water for 47,000 acres of farmland. Some Republican members of Congress from the Northwest are accusing a GOP Idaho lawmaker of conducting secret negotiations with the Democratic governor of Oregon over a controversial proposal to breach four dams on the Snake River to save endangered salmon runs. 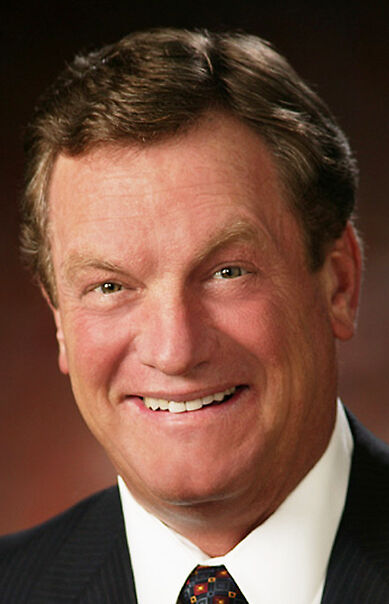 This map shows the locations of the four Lower Snake River dams. Idaho 2nd Congressional District Rep. Mike Simpson is calling for a program to remove the dams.

Ice Harbor Dam on the Lower Snake River holds back Lake Sacajawea, a source of irrigation water for 47,000 acres of farmland. Some Republican members of Congress from the Northwest are accusing a GOP Idaho lawmaker of conducting secret negotiations with the Democratic governor of Oregon over a controversial proposal to breach four dams on the Snake River to save endangered salmon runs.

Every single salmon and steelhead that spawns in Wallowa County streams must navigate the four dams on the lower Snake River twice — once as a smolt en route to the ocean and again as an adult returning to its natal stream. Saturday, Feb. 67, Idaho 2nd Congressional District Rep. Mike Simpson, an 11-term Republican, called for a $33.5 billion, decade-long program that would breach those dams and provide support for local economies to save Idaho—and also Wallowa County—salmon and steelhead.

Simpson’s district includes Boise, Stanley and sockeye salmon home-base, Redfish Lake where last year only 27 mature sockeye salmon of 660,000 released juvenile hatchery fish completed their 1,800-mile round trip journey to and from the Pacific to spawn.

“Congressman Simpson’s Columbia Basin Initiative is the largest salmon recovery proposal in our lifetime,” said Jim Harbeck, field office supervisor for the Nez Perce Department of Fisheries Resources Management in Joseph. “It has the potential to restore anadromous fish populations in the Snake River Basin including our Chinook and Coho salmon, steelhead, lamprey and future sockeye right here in Wallowa County.”

But the proposals is larger than just removing four dams, he said.

“It is unique in that it gives visionary and equal consideration for infrastructure, agriculture, energy and transportation in the Pacific Northwest,” Harbeck said. “It really is a far-reaching regional fix that relies upon the icon of the Pacific Northwest – the salmon, Nac’ox – to benefit us all.”

Simpson and his staff have devoted three years and more than 300 meetings with stakeholders, tribes, elected representatives, agriculturalists, barge companies and other and others, trying to find a solution that works for all to the problems the four Lower Snake River dams poise. According to a statement on his website, those meetings in part addressed the issues of what benefits they received from the dam’s presence, how those benefits might be replaced if the dams were removed and how expensive it would be to ensure they continued.

Ensuring that communities whose economies depend upon the dams continue to prosper is critically important, Simpson said.

Simpson’s congressional website proposes a “concept” that outlines some advantages to planning dam removal now, and also proposes a timeline.

The advantages of planning dam breaching now, he noted, include the presence of Washington, Oregon and Idaho legislators in senior congressional positions, and a potential multi-billion-dollar federal infrastructure and clean energy stimulus package that could provide funding for his estimated $33.5 billion program.

Simpson’s outlined concept includes developing replacement power sources such as small modular reactors as well as increasing transmission capacity. He proposes the breaching of all four dams be completed by the summer/fall of 2031.

“I have found that replacing the benefits of the four Lower Snake River dams would be very expensive at a minimum of $33.5 billion,” he said. “However, this may prove to be a bargain when compared to what it may cost in out-of-pocket dollars for fish recovery and future costs put on stakeholders. Despite spending over $17 billion on fish recovery efforts, Idaho salmon and steelhead numbers are not improving and will continue to get worse. Will we spend $20 billion more in the next 30 years only to have them go extinct anyway? The worse they get, the more we will spend.”

Reaction to Simpson’s “concept” has been mixed.

“These dams are the beating heart of Eastern Washington and provide the entire Pacific Northwest with clean, renewable, reliable and affordable energy,” Eastern Washington Rep. Cathy McMorris Rodgers said. “Spending more than $33 billion to breach them – with no guarantee that doing so will restore salmon populations – is a drastic, fiscally irresponsible leap to take. I look forward to continued conversations with my colleagues on the importance of the Lower Snake River Dams and solutions that will benefit all users of the Columbia River System.”

“More than 1,000 miles of clear, cold rivers and perennial streams flow out of Northeast Oregon into the Lower Snake,” said Christina de Villier of the Greater Hells Canyon Council in La Grande. “That means that our communities steward about 20% of the network of waterways whose salmon and steelhead fisheries (an important part of our culture and economy) are impacted by the four Lower Snake River dams. For that reason alone, we have a stake in what happens on the lower Snake. It’s our watershed.”

Nez Perce Tribe Executive Committee Chairman Shannon F. Wheeler in a statement Saturday, Feb. 6, said, “We view restoring the lower Snake River — a living being to us, and one that is injured — as urgent and overdue. Congressman Simpson, in focusing on the facts and on a solution, speaks the truth — that restoring salmon and the lower Snake River can also reunite and strengthen regional communities and economies. We will support Congressman Simpson’s initiative and we respect the courage and vision he is showing the region. This is an opportunity for multiple regional interests to align with a better future for the Northwest: river restoration and salmon recovery; local and regional economic investment and infrastructure improvement; and long-term legal resolution and certainty,”

“It would be a tragedy,” Simpson said, “if future generations looked back and wished our generation of leaders and stakeholders would have taken the time to explore this opportunity to develop our own Northwest solution to protect stakeholders and save salmon.”