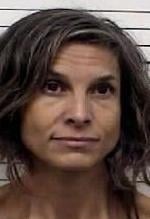 JOHN DAY — A second suspect has been arrested for murder and arson after a couple's house was destroyed by fire in rural Grant County in 2018.

A July 27 grand jury indictment accuses Connery of first-degree murder for the deaths of Terry and Sharon Smith, first-degree arson and unauthorized use of a vehicle on July 18, 2018. She is being held in the Bernalilo County Detention Center, awaiting extradition to Oregon.

Her son, Isaac Connery, 23, was arrested in New Mexico June 26 on the same charges. He has been extradited to Oregon and is being held in the Grant County Jail with bail set at $500,000.

The two are accused of killing Terry and Sharon Smith in July 2018 and setting fire to their home on Nans Rock Road in the Laycock Creek area between Mt. Vernon and John Day, according to a July 8 press release from Palmer and Grant County District Attorney Jim Carpenter.

The fire totally destroyed the home, but Palmer later discovered partial human remains at the site, which were identified through DNA as belonging to Terry Smith, the prior release states. Palmer also discovered other partial remains that could not be identified but have been accepted as belonging to Sharon Smith.

Evidence, including witness testimony and suspect cellphone locations, place Isaac and Gabrielle Connery at the Smith home at the time of the fire, according to the release. The Connerys were associated with the Smiths, both in Hawaii and Oregon, prior to the incident.

The Smiths’ pickup later was discovered in the Boise, Idaho, area after the fire, and follow-up interviews with witnesses indicated Isaac Connery took the pickup the night of the fire, the release stated. He was indicted June 23 for unlawful use of a motor vehicle, and a nationwide warrant was issued for his arrest.

During an interview, Grant County Undersheriff Zach Mobley learned the Connerys dropped off two Connery minor children at a local campground, likely Clyde Holliday State Park, on the afternoon or evening of July 17, 2018, and then Gabrielle Connery drove Isaac Connery to the Smith home and dropped him off, before returning alone to the campground to pick up the children, according to the release.

"Isaac Connery went to the Smith home and shot Terry, then Sharon Smith, and set fire to their home," the release states. "Then Isaac Connery took their pickup and drove to meet Gabrielle Connery" in the Boise, Idaho, area.