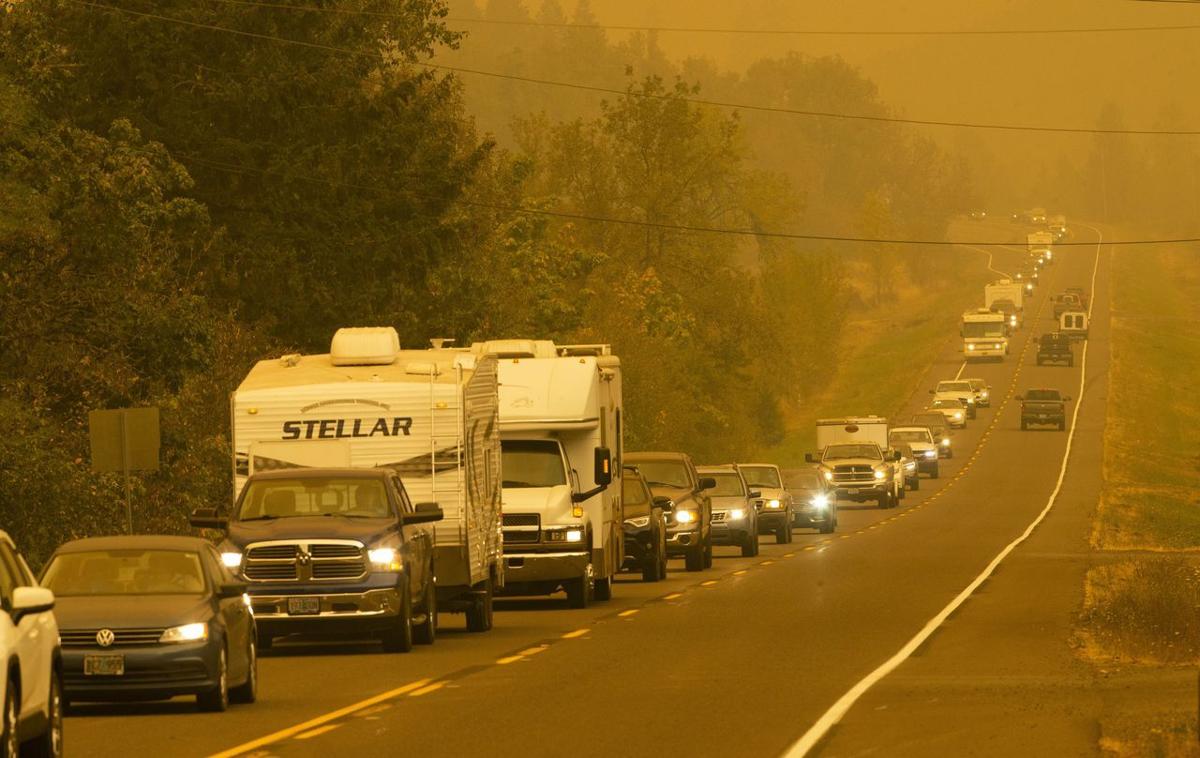 A steady stream of vehicles heads west Tuesday, Sept. 8, on a road east of Springfield as residents evacuate the area ahead of a fast-moving wildfire. 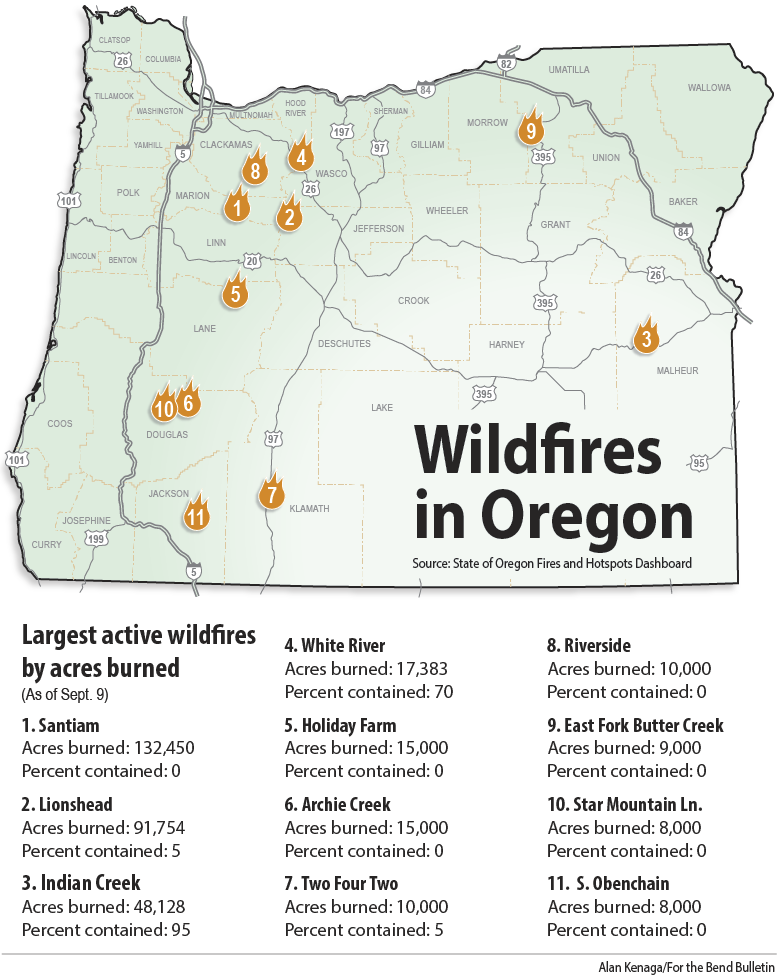 A steady stream of vehicles heads west Tuesday, Sept. 8, on a road east of Springfield as residents evacuate the area ahead of a fast-moving wildfire.

SALEM — Oregon is being swept by likely the most deadly and destructive fires in its history, Gov. Kate Brown said Wednesday.

“I want to be upfront with Oregonians,” Brown said. “This could be the greatest loss of life and structures due to wildfire in state history.”

As of noon Wednesday, 47 active fires covering 374,522 acres were burning in Oregon, according to the Oregon Office of Emergency Management.

Early reports indicate the towns of Detroit in Marion County, Blue River and Vida in Lane County, and Phoenix and Talent in Southern Oregon, are substantially destroyed, the governor said.

State officials said they had no number yet on casualties, but they were expected. Mortuary units from the Oregon National Guard are being activated.

The fires continue to burn largely unchallenged as firefighters concentrate on evacuating people to safety.

“We are having limited success,” said Doug Grafe, with the Department of Forestry. “Most I would put at zero percent containment.”

Brown said that towns along the western facing valleys of the Santiam River, McKenzie River and Rogue River had been destroyed.

The largest blaze is the Santiam/Beachie Creek Fire at 132,450 acres burned east of Salem. It is zero percent contained. The Lionshead Fire has burned 109,222 acres. Fire officials said they expected the fires in the Santiam River area to combine into one large blaze.

About 3,000 firefighters are deployed.

“I would expect that to scale up over next 24 hours as we get on the offense on these fires,” Grafe said.

But reinforcements are not plentiful because of fires across the western United States are breaking out at the same time.

“The national system is absolutely strained,” Grafe said. “We have to work with what we have.”

Much of eastern Lane County has been under evacuation orders because of the Holiday Farm Fire. Residents in Leaburg, Walterville, Camp Creek and portions of the Mohawk Valley were ordered to leave. In Marion County, Scott’s Mills and Stayton remain under Level 3 “go now” evacuations. Sublimity, Aumsville and Silverton are at Level 2 “be ready.”

The Almeda Street Fire reportedly began as a small blaze in grass adjacent to Interstate 5 south of Medford. It burned north, destroying homes and other structures in Phoenix and Talent. All residents of Jackson County are currently under a Level 1 “get ready” evacuation order. A second, smaller fire, was reported in Eagle Point.

Brown pointed to the unpredictability of the blazes as a warning for residents across the state to be ready if evacuation orders are given.

“Fire can be very fickle,” she said, adding that if ordered to evacuate, “please leave — you may not get another chance.”

The Devil, Slater and Bailey fires were burning just across the California state line. The Auburn, Woodhead and Mann fires are burning in Idaho near the Oregon border.

At least seven active fires were burning on the Washington side of the Columbia River, between Long Beach in the west and Paterson in the east.

The National Guard has been operating seven aircraft to support the firefighting. These include HH-60M Black Hawk helicopters. Two are doing medical evacuation, the rest are firefighting.

Grafe said the state had enough aircraft to meet its needs and that the high winds and dense smoke were keeping many on the ground for now.

Evacuations will continue to be the main focus until at least Thursday.

Delaying as fire races toward a community is not an option.

“Once that Level 3 evacuation order comes, you have to get out, there is no time left,” Phelps said.

Brown said state and local officials are working to disperse evacuees and not have them congregate in one spot, due to the COVID-19 pandemic. Red Cross centers are the staging area for relief efforts and evacuees are being urged to register with the Red Cross so that they can be found by friends and family.

Just under 2 million acres are burning in California alone.

There is currently an Air Quality Alert for the Oregon Coast, Willamette Valley, Southern Oregon. Hazardous Air Quality is also reported in Florence, Corvallis and Silverton.