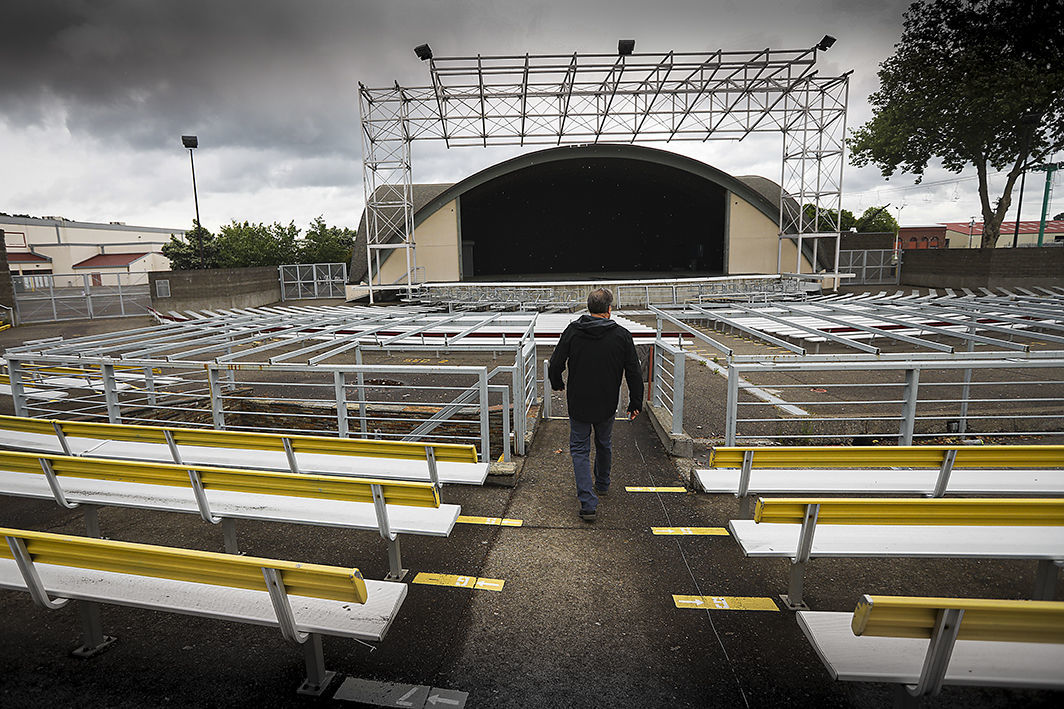 Wayne Petersen, director of expo center events and fair vendors, walks through the L.B. Day Amphitheatre at the Oregon State Fairgrounds in Salem on May 12. The 2020 Oregon State Fair was recently canceled. 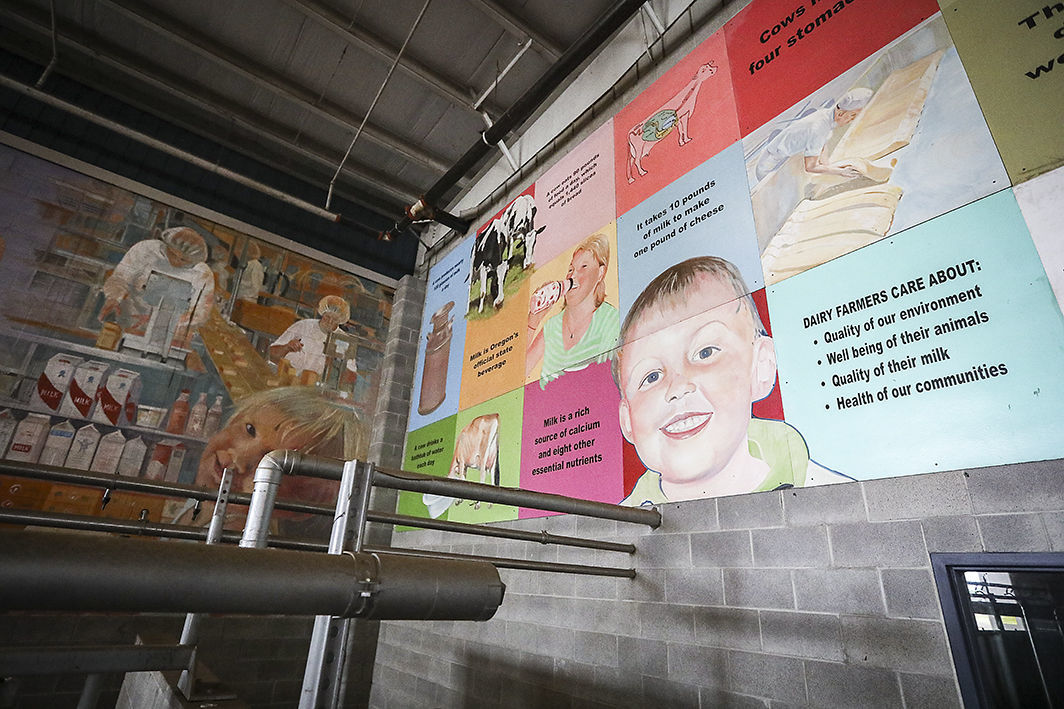 A mural above the milking parlor in the Forster Livestock Pavilion at the Oregon State Fairgrounds in Salem, OR on May 12, 2020. The 2020 Oregon State Fair was recently cancelled due to COVID-19. (Amanda Loman/Salem Reporter)

Wayne Petersen, director of expo center events and fair vendors, walks through the L.B. Day Amphitheatre at the Oregon State Fairgrounds in Salem on May 12. The 2020 Oregon State Fair was recently canceled.

A mural above the milking parlor in the Forster Livestock Pavilion at the Oregon State Fairgrounds in Salem, OR on May 12, 2020. The 2020 Oregon State Fair was recently cancelled due to COVID-19. (Amanda Loman/Salem Reporter)

There will be no home brew or wine competitions.

The summer-ending ritual of going to the Oregon State Fair and flushing money into the Salem economy is gone for 2020.

The decision came quickly last week, but not easily.

Gov. Kate Brown told the state that large gatherings wouldn’t be permitted until September at the earliest.

“When this all came down, we just said, ‘OK, this is what we need to do’ and by 4 p.m., we were sending out information to our sponsors, fairgoers and vendors,” said Kim Grewe-Powell, fair deputy director.

Following the governor’s order, the 2020 Oregon State Fair, which included six special events, 17 ongoing attractions, seven stages and 17 competitions, was canceled. The fair was scheduled to run Aug. 28 to Sept. 7.

A tradition for 156 years

, the state fair draws approximately 300,000 visitors each year and is estimated to generate 400 jobs and $36.5 million for the Oregon economy, according to a 2016 study by Gruen Gruen + Associates.

One of the vendors hit hardest by the decision was the carnival company Rainier Amusement LLC, a family business based in Portland that goes back three generations. Crystal Hoss co-owns the company with her husband. They provide rides to fairs like the Zipper and Tilt-A-Whirl.

Rainier Amusement typically books 40 fairs and festivals between March and October, but the Oregon State Fair is its biggest customer. State fairgoers spend approximately $4 million at the carnival’s attractions each year, which is about 19% of the total $22 million of on-site spending.

“It’s a huge gross income for our business,” says Hoss. “It’s not only just us. That money also goes back into the community,” she said.

Hoss said her company hires local teens (for many, it’s their first job) and adults who take time off from their regular jobs to work at the carnival during the fair to make extra money. Rainier also rents portable toilets, dumpsters, generators and pays for essential workers like state police and local security.

“A lot of people don’t realize that trickle-down effect,” says Hoss. “Sixty to 75% of our company’s gross income goes back to Oregon State Fair, back into the community, to pay all those vendors.”

But during the coronavirus pandemic, Crystal Hoss said what keeps her up at night is the stress of how to pay the company’s bills. She worries about her 75 to 100 employees plus her additional local hires and hopes that the COVID-19 relief grants and loans she applied for will come through.

But it’s a waiting game. The carnival company hasn’t had business since the end of season last fall and is facing an entire year or more of staying dark. Hoss also worries about the wider impact of canceling this year’s state fair.

“All the people that that fair brings into town shop, buy groceries, eat at local restaurants. People come from the south, the east side of the state and use lodging, campgrounds, Air bnbs. They depend on that influx,” Hoss said. “I’m more afraid of the impact of economics. Scares me what this will look like when this is all over.”

In 2016, fair-goers staying in town spent about $2.1 million. Those in town just for a day at the fair dropped another $5.7 million that year, meaning the Salem area this year will lose $8 million or more in such spending.

Grewe-Powell said that since the early days of the pandemic, the state fair council has been monitoring its effects on events and other fairs across the country. The council remained hopeful it would be possible to run the state fair since it comes at the end of summer. Early forecasts had expected the pandemic to subside substantially by then.

“But as things progressed, we discussed the possibility of the Oregon State Fair not happening and if so, how we should create a plan B or C,” she said.

“Even though the decision was made for us, it doesn’t make it any easier,” she said. “I don’t think we would have made the same decision on our own,” Grewe-Powell said.

Still, the council supports Brown’s decision. So does Senate President Peter Courtney, a Salem Democrat. He said he is highly concerned about the threat to public health that the coronavirus poses.

“I think if I was on the board, I would have said, we got to do this. This thing has no mercy. That’s the monster that we’re dealing with,” Courtney said.

The loss of this year’s fair is also a heartbreaker for 4,000 youth who can’t bring their animals and projects, such as arts and crafts, to the fair this year.

“4-H and (Future Farmers of America) kids, they come there and actually sleep sometimes right where their animals are. If you could see those young people where they talk to each other, from all parts of the state, I mean, isn’t that important?” Courtney asked.

Most kids in 4-H and FFA log hundreds of hours of work over months on their projects and spend considerable money on their livestock to prepare for state fair competition. Many then count on getting returns on their investments from livestock sales at the fair.

There are other elements of the state fair that are harder to value in dollars, such as the Gerry Frank Chocolate Cake Competition. Since 1959, fourth-generation Oregonian Gerry Frank of Salem has been judging an average of about 100 contestants’ chocolate cakes at the fair each year.

“It’s the longest -running contest in a state fair in the country — as far as we know — 60 years!” said Frank, who turned 95 last year. “It’s been a great ride. I’ve enjoyed it tremendously. The fact that so many people find enjoyment of entering and watching.”

Steven Robert Heine loves the joy the state fair brings people. In 1988, he started the fair’s poetry contest, which he said was adopted across the country by other fairs.

“If you were a poet and you got to enter, just having hundreds of people see your poetry at the fair is a pretty big prize. It gives them a chance to share with people what they’re thinking, what they’re feeling,” he said. “The state fair is one of the few large public events where poetry can be on display.”

Heine published a definitive history of the Oregon State Fair in 2006, including the three other years when the fair was canceled: 1905 because the Lewis and Clark Centennial Exposition was taking place in Portland that year, and in 1943 and 1944, when the fairgrounds were leased to the military for lodging during World War II.

“Missing this year’s fair is like a diary with a missing page. You kind of wonder about it a bit. It’s just not there,” Heine said.

The idea of a virtual fair is something that Grewe-Powell said the council is exploring as a way to tide fairgoers over until next year, when hopefully, the pandemic is over.

“A lot of fairs are doing, like a virtual fair, to keep their patrons engaged and to look forward to it,” she said. “But we haven’t decided yet.”