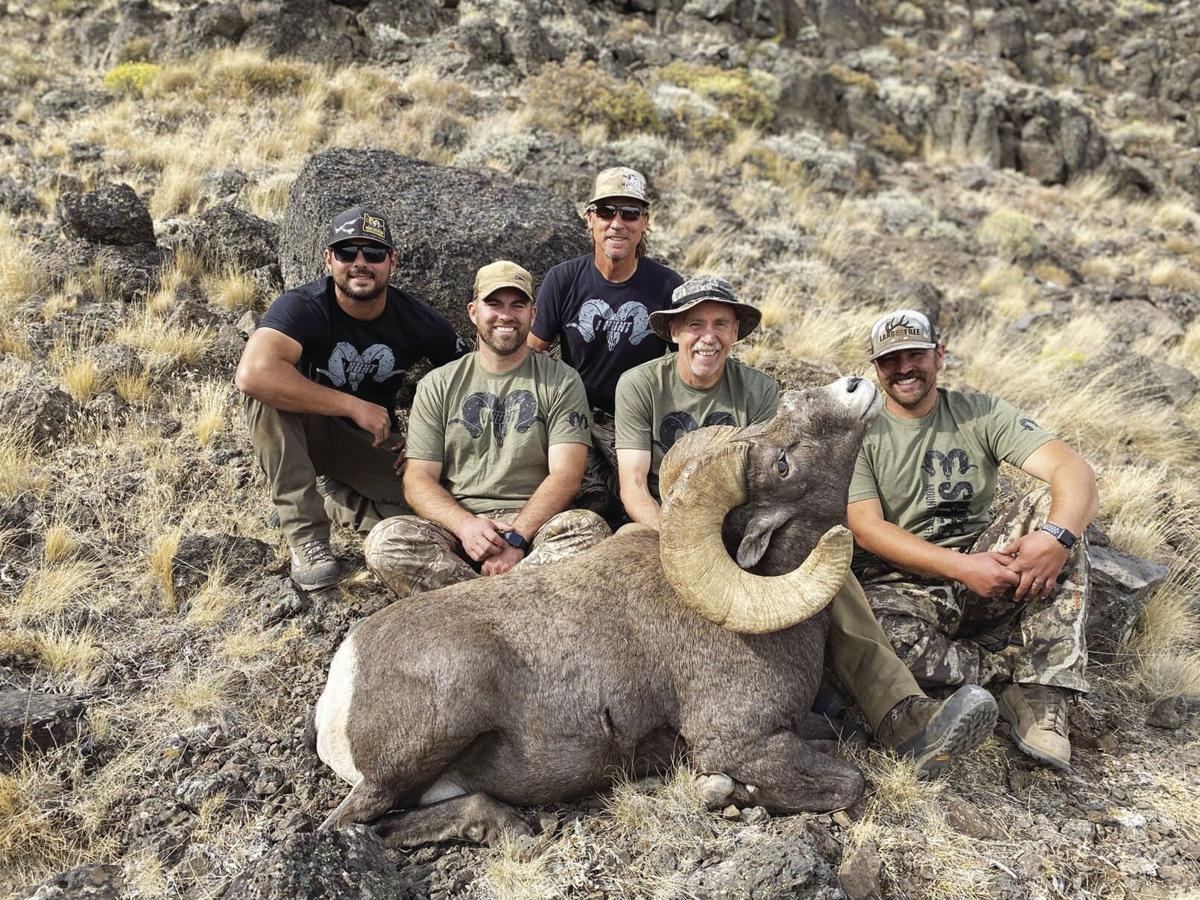 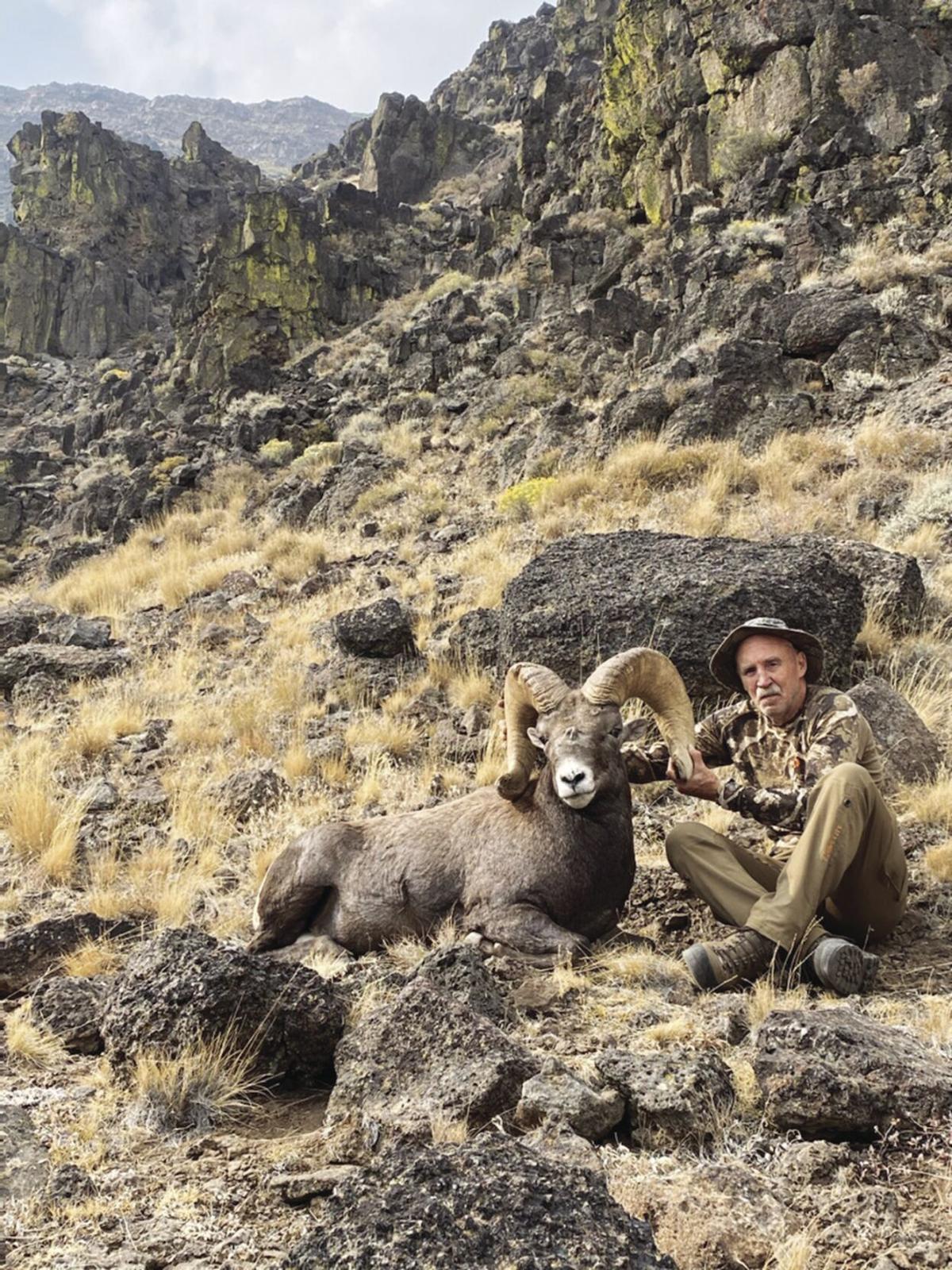 Jerry Yencopal with the bighorn sheep ram he shot on Sept. 18 in Harney County. The area, north of Fields and south of Steens Mountain, has extremely rugged terrain with basalt rimrock and cliffs.

Jerry Yencopal with the bighorn sheep ram he shot on Sept. 18 in Harney County. The area, north of Fields and south of Steens Mountain, has extremely rugged terrain with basalt rimrock and cliffs.

As if the hunt weren’t challenging enough.

Basalt cliffs to clamber over.

Late summer skies sullied by smoke from distant wildfires, making it difficult to pinpoint sheep herds even with the aid of powerful binoculars.

The anxiety of knowing that he’d never get another chance to bag a ram in Oregon.

And now an arachnid injecting itself, so to speak, into the proceedings.

Jerry, 71, of Baker City, can chuckle about the episode now, after almost three months have elapsed.

Everything turned out fine.

Better, even, than Jerry could have imagined.

He downed a trophy ram.

No venom was transferred.

“It was just the best experience I’ve had in a long time, hunting,” Jerry said.

More than anything else, he relished sharing that experience with his two sons, who he’s hunted with since they were boys.

Rob is a battalion chief with the Albany (Oregon) Fire Department.

“To be with them ... that’s what your heart desires with family,” Jerry said.

Rob was instrumental not only in making his dad’s hunt possible, but also in thwarting a potentially painful encounter with that spider.

A few years ago Rob happened on a new Christmas gift for his dad — applications for bighorn sheep and mountain goat hunts.

Those are highly sought after tags in Oregon, since a hunter can draw only one of each in a lifetime.

And with several hundred hunters vying for each tag, and in some cases more than a thousand, the odds are stacked pretty heavily against any one hunter drawing a tag.

But 2020, which was so unfortunate in so many other ways, proved lucky in one respect.

Jerry drew the lone tag for an Oregon resident for a bighorn hunt in the East Beattys Butte/Alvord Peaks area in Harney County south of Burns, a tag that, in 2019, 256 people applied for.

(There was also a single tag for a non-Oregonian for that hunt.)

The three Yencopals traveled together from Baker City the day before to an area near Fields that their guide, Sheep Mountain Outfitters, had picked out.

One of those guides, Dan Blankenship, is a longtime Baker City resident who Jerry knows.

Sheep Mountain Outfitters was also guiding the out-of-state hunter who drew the other tag for that hunt. Jerry said that hunter bagged his ram on opening day, Sept. 15.

The next day, Sept. 16, Jerry, his sons and the guides came across a herd of sheep.

The distance was at the extreme end of the range Jerry was comfortable with — about 600 yards. He did take a shot at a ram but missed.

The group didn’t see any sheep on Sept. 17 so the next day, Friday, Sept. 18, they returned to the area where they hunted the first two days.

They saw a herd of sheep bedded down, including a decent ram.

But at the same time Jerry was watching that bunch, another group of guides was about 2 miles away.

Jerry said Blankenship texted a photo of the ram to the other guides.

(“We had excellent cell service down there, surprisingly,” Jerry said.)

Almost immediately the other guides responded.

They were watching a separate herd, and in particular a ram that they described, as best as Jerry can remember, as a “dandy.”

It was certainly bigger than the ram he and his sons were monitoring.

Jerry decided to go after the larger ram.

This was no small matter.

“We decided to climb the rest of the way up the mountain,” he said.

“Most of that was me dragging,” Jerry said with a laugh.

He said both his sons and the guides strived to make the hunt as easy as possible for him.

That included carrying the rifle that Sheep Mountain Outfitters supplied, a gun chambered for the 6.5 mm Creedmoor cartridge, which is well-suited for the long shots typical in the desert country of Harney County.

When the group neared the top of the mountain, Rob offered to take his dad’s pack for a while.

“We want you fresh for taking the shot,” Jerry recalls his son telling him.

At the instant that Jerry slipped his arms out of the pack’s straps and handed it to Rob, a black widow crawled out of its top, a path that would likely have put the spider on the back of Jerry’s neck.

“I just know God had his hand in all this,” Jerry said.

They “dispatched” the spider and resumed the hunt.

Jerry found a good spot to hunker down. The clouds, which had been thick earlier, had briefly parted, although the clear air was largely confined to their mountain. He could see the ram through his scope.

Well, he could see the ram’s head.

“All we could see was his horns over this rock,” Jerry said.

And for the next 40 minutes that was the extent of the view.

Jerry said Blankenship tried to keep him calm during the long wait, offering him a stick of gum.

Finally the ram stepped out of its rocky shelter.

Jerry fired a shot from about 360 yards.

After making his way gingerly through the boulders and across a rockslide to reach the ram, Jerry said he was humbled.

“They are just such a magnificent animal,” he said. “Oh my gosh, just beautiful.”

Jerry, who has hunted deer for decades, said the stocky, thickly muscled bighorn “was like looking at a fullback versus a deer that’s more of a halfback.”

The clouds settled in again, but Jerry said that gave the group a welcome respite from the late summer heat as they packed the meat and horns down the mountain.

Just after they returned to camp, rain started pouring down.

Jerry said he joked with his sons that the bighorn hunt has “spoiled” him, that now he’ll expect to have them, along with guides, to carry the water and the gun and the pack.

“The care and concern and watchfulness of all those guys,” Jerry said. “You’re not going to find anyone more caring than Blankenship and his guys.”

A taxidermist is working on the ram. The shoulder mount will be placed on a pedestal.

Jerry said he doesn’t have a spot for the display in his home, so the ram will be set up at Rob’s house.

As memorable as the hunt itself was, Jerry said he was also impressed by the setting. It was his first visit to Oregon’s southeast corner, his first time seeing Steens Mountain, the great fault block mountain that dominates the landscape for 50 miles around.

“That’s really neat country,” he said. “I’d like to get down there again and do some sightseeing.”

Jerry said he and his sons found many chips of obsidian, particularly around waterholes, evidence of the American Indians who lived in that area for thousands of years.

Jerry said he understood, from the moment in June when Rob told him about the tag, that this hunt would be different.

But Jerry said the experience, even with so much anticipation, managed to exceed his expectations.

“I just don’t know how to explain it ... it just brings a smile to my face and my heart just thinking about it,” he said. “It’s something we’ll cherish for a long, long time.”

“I just don’t know how to explain it ... it just brings a smile to my face and my heart just thinking about it. It’s something we’ll cherish for a long, long time.”

— Jerry Yencopal of Baker City, talking about the once-in-a-lifetime bighorn sheep hunt he went on in September with his two sons, Jason and Rob, in Harney County