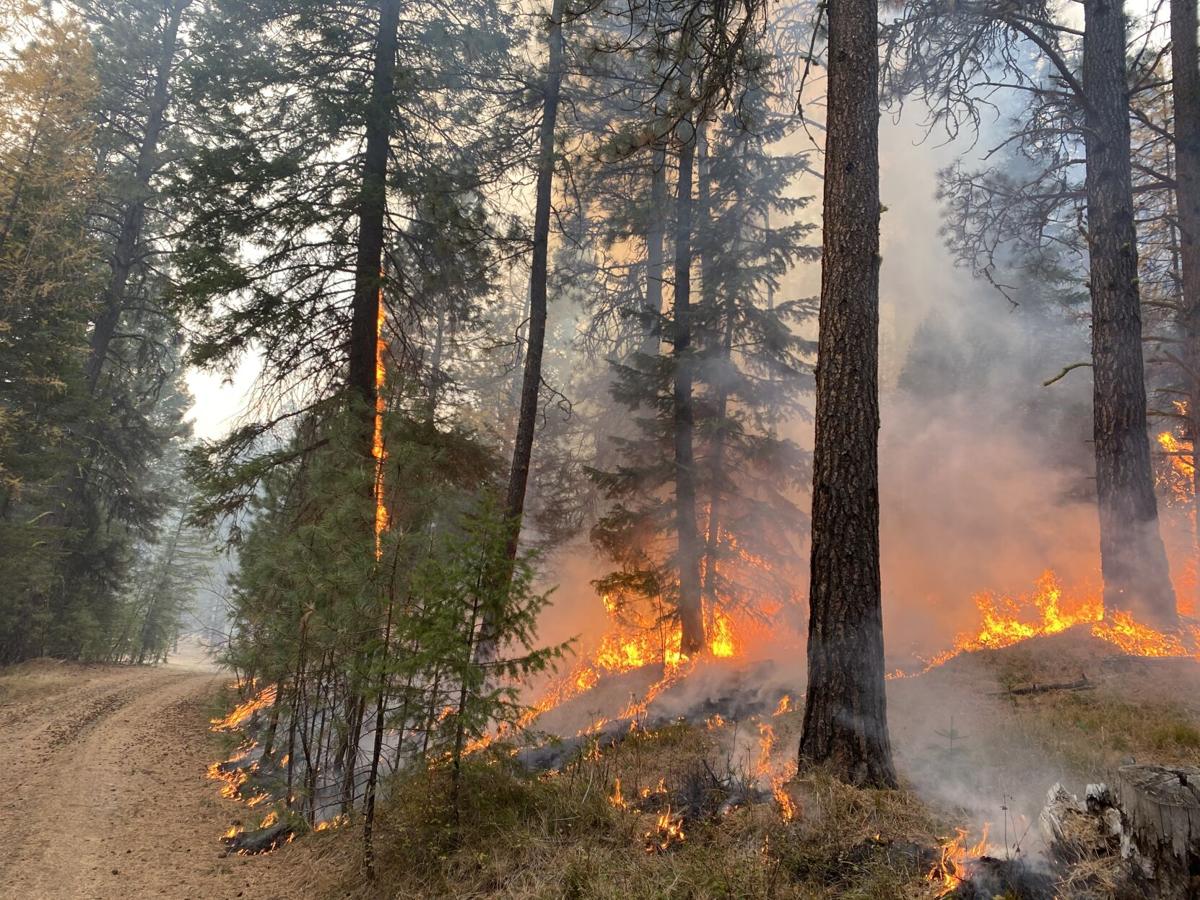 Surface fuels burn in a stand of timber near Big Creek, part of the prescribed burn the U.S. Forest Service conducted in early November 2020 in the Bald Angel management unit on the Wallowa-Whitman National Forest. 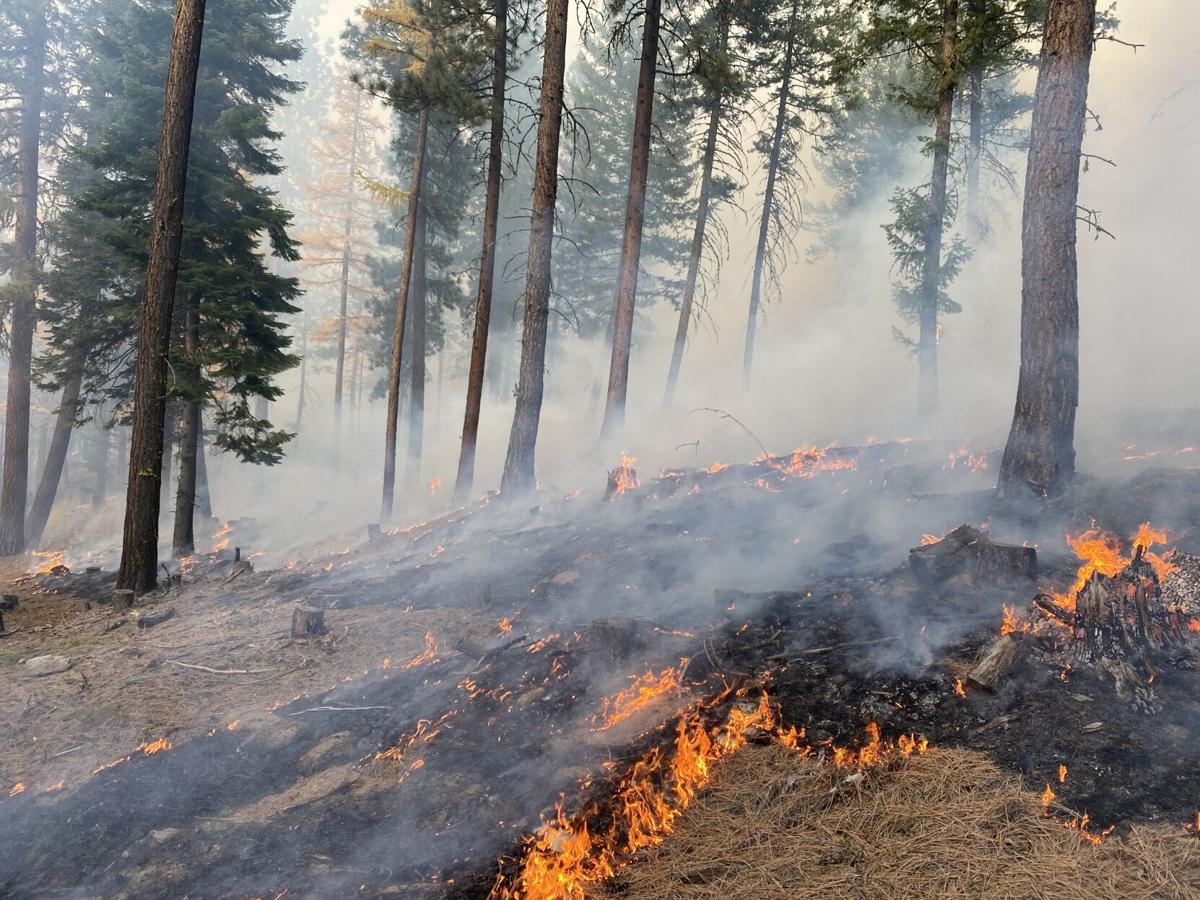 A slope burns in early November 2020 near Big Creek, north of Medical Springs, part of the prescribed burn the U.S. Forest Service conducted.

LA GRANDE — Fire season 2020 was one for the record books, as have been many such seasons in the past decade. Fresh are many Oregonians’ memories of dangerously poor air quality, blood-red skies choked with smoke and, tragically, images of entire towns and neighborhoods reduced to heaps of ash and scrap.

But even as blazes were being fought out west, efforts on the Wallowa-Whitman National Forest turned from preventing and suppressing fires to lighting them.

“Fire does a good job of maintaining what’s supposed to be there,” said Mike Johnson, a fire management official with the Forest Service. “It’ll keep the fire-intolerant species out and keep the surface fuels to the appropriate levels, so they’re not conducive to having the large crown fires that you’ve been seeing. ... It’s a maintenance tool.”

Prescribed burns are a biannual mainstay in Northeast Oregon’s forests, with brief windows of ideal conditions in the fall and spring.

Each window closes almost as soon as it opens, appearing in the fall during the weeks between fire season and the onset of mountain snow, while in the spring, fire managers have to walk the line between lingering winter sogginess and the overgrown vegetation of later months.

This year, local Forest Service efforts focused on a unit known as “Bald Angel,” a fairly widespread area in the vicinity of Medical Springs. Johnson said that, in burning a almost 800 acre section near Big Creek, they were continuing forest management efforts that span a decade.

“This burn that we did (the first week of November), it was to keep the surface fuel levels down — the limbs and the needles that have been dropping… and then there were a bunch of young white fir starting to come back up underneath the overstory of ponderosa pine and doug fir in there,” Johnson said. “We wanted to kill that out before it got too big in there, and we met all those goals with that burn.”

Johnson stressed the goal of any prescribed burn is not to rid an area of burnable fuels but rather that burning was one tool among many to promote healthy forests, which are less prone to out-of-control crown fires.

He pointed to the Bald Angel unit as an example of how forest management was a multifaceted process that takes place over a long timeframe.

“For us, burning is just one tool in the drawer,” Johnson said. “I think a lot of time, people think that burning is gonna fix forest health issues. In most places, that’s not true … burning’s just one of them. Pre-commercial thinning, timber harvest, planting, all these other things are all part of it too.”

While the Forest Service had hoped to conduct more prescribed burns this fall, the window to do so has now closed, and they’ll have to wait until spring to break out the drip torches again.

When they do, Johnson said they hope to get to some of the units in the Hilgard/Spring Creek area, which includes the Bird Track and Limber Jim units. Air quality concerns for the Grande Ronde Valley and personnel hindrances resulting from the ongoing COVID-19 pandemic prevented the Forest Service from burning the upwind area.

“We always have thousands and thousands of acres we’d like to get done, like this year, this fall season, we’re gonna end up with like 800 acres when I wish we had several thousand acres done,” Johnson said. “You’re just limited on the weather windows, and then smoke management’s always just a part of that.”