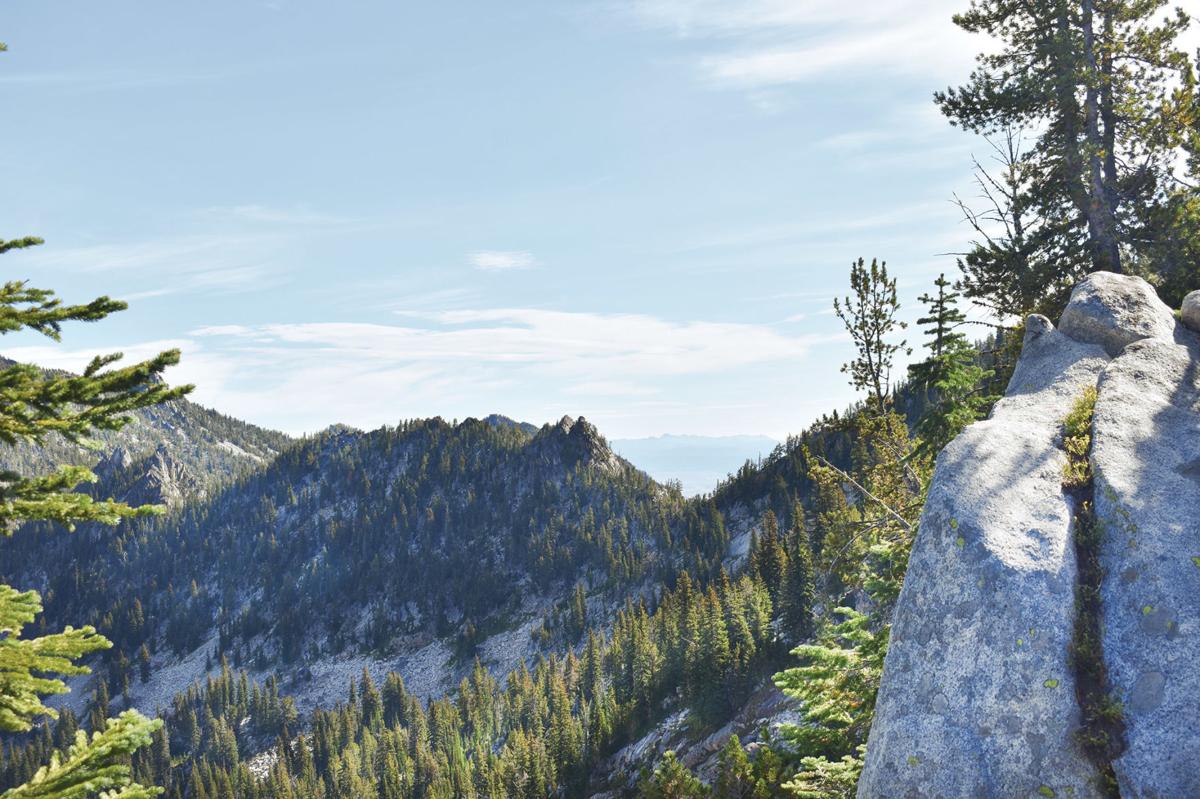 Looking east from Angell Pass the view includes Van Patten Butte at the left and in the hazy distance a chunk of the southern Wallowas. 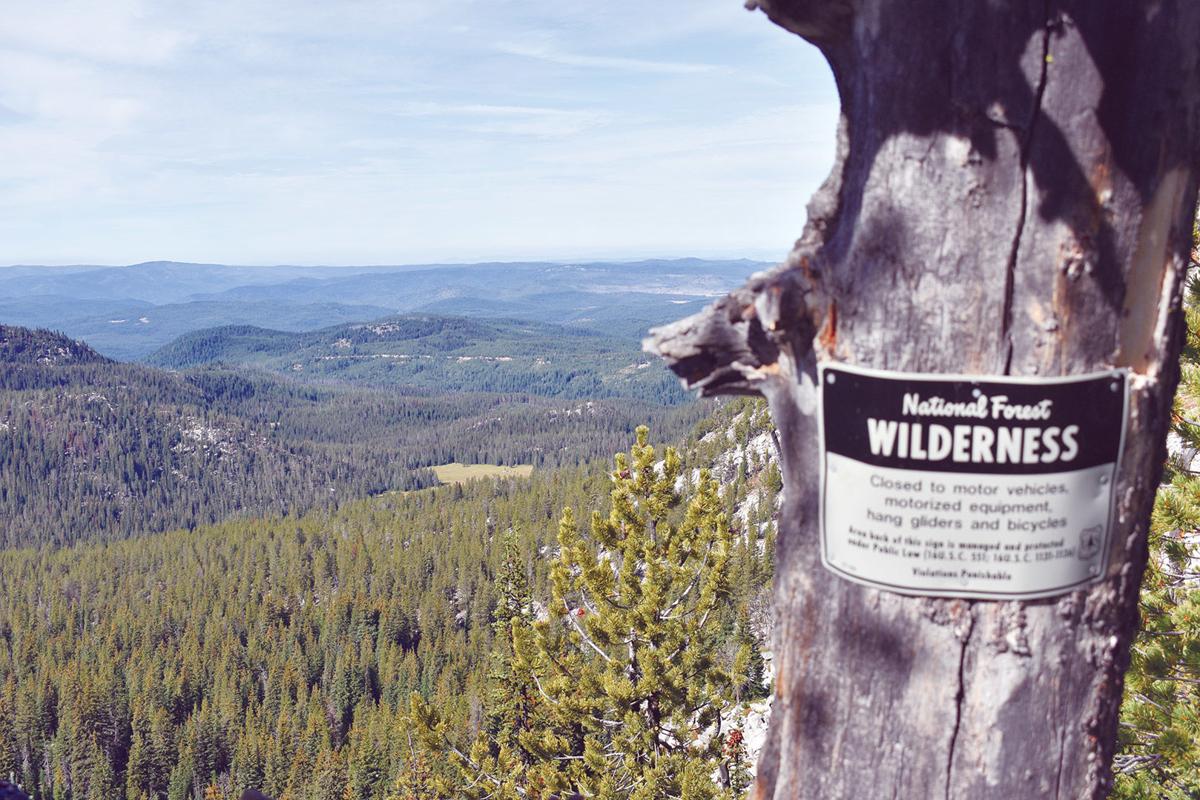 Looking southwest from Angell Pass on the Elkhorn Crest Trail. Beyond the pass the trail enters the North Fork John Day Wilderness. The tawny patch in the center is Crawfish Meadow. 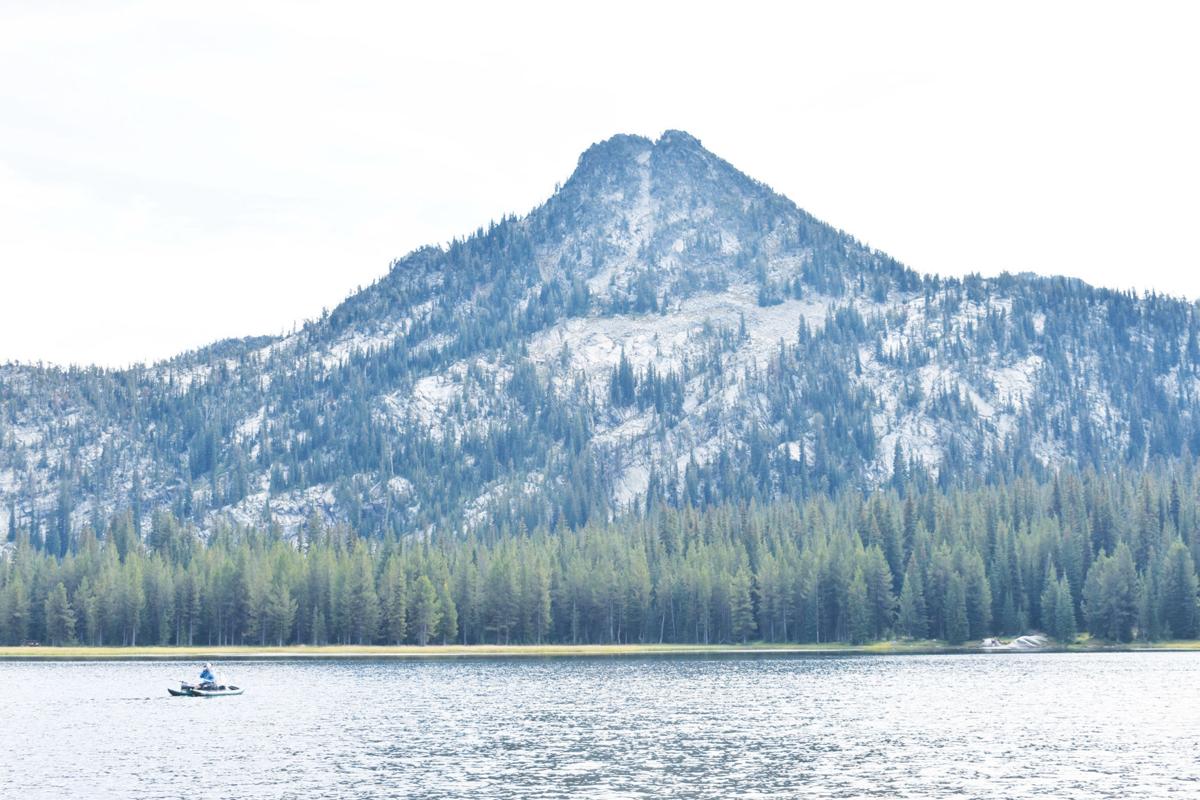 Looking east from Angell Pass the view includes Van Patten Butte at the left and in the hazy distance a chunk of the southern Wallowas.

The thermometer is the customary instrument for detecting the passage of one season to the next, but I’ve often found that the wind tells the more compelling tale.

This is especially so in the alpine country.

The breeze blows pretty consistently up there anyway, above most of the terrain that interrupts the flow of air much as a log slows a stream.

But it’s the feel of the wind on my cheeks, not its velocity or its ubiquity, that hints at the seasonal transition.

I had this experience a few weeks ago while hiking a trail in the Elkhorn Mountains that, at least in most years, remains accessible, without the need for snowshoes or other winter gear, until around Halloween — and sometimes even a bit later.

It’s the Elkhorn Crest Trail, the longest and most celebrated path in the range.

The only one, at any rate, designated by Congress as a National Recreation Trail.

The Crest Trail added that official title in 1980, before the section which I hiked on a pleasant day near the middle of September — the northerly three miles — had even been hacked and blasted from the Elkhorns’ granitic ramparts.

It was a warm day for late summer. A southerly wind, the precursor to a potent cold front that caused the temperature at the Baker City Airport to plunge 25 degrees in two hours the next evening — was propelling balmy air from California into Eastern Oregon.

I was hiking with my wife, Lisa, and our kids, Olivia, 12, and Max, 8. When we rounded a ridge and left the subalpine fir and lodgepole pine forest for the more open country above the headwater meadow of Antone Creek, the sunlight fell heavily. We stopped for a drink of water and my T-shirt clung to my back with a clammy embrace when I shrugged off my pack.

It felt more like July than September — albeit without any mosquitoes sniping at us.

But this charade was short-lived.

The trail climbs to its 8,200-foot apex at Angell Pass in a gradual, grudging way — a design typical of the pack train-friendly paths in the Eagle Cap Wilderness but rare in the Elkhorns, where trails generally attack the terrain directly.

There are several switchbacks tucked into the mile or so leading to the summit, and it was at one of these that the wind pulled me forward into fall.

The place was partially in shade thanks to a whitebark pine whose roots had somehow wedged into the scanty soil between boulders, and as I swung round the switchback the wind that struck my face seemed to immediately turn the sweat on my brow to something closer to the scrim of ice that forms on puddles around dawn.

The sensation was brief, and within a few hundred yards, where the trail crosses a treeless slope of scree, the temperature rose palpably.

But it had lost its former force.

At the pass, where we turned back, the air was pleasantly warm but it had the keen biting feel that is exclusive to autumn — a sort of insubstantial thinness. You know on such days that the gentlest zephyr, the narrowest patch of shade, will seem to cut 10 degrees instantly.

Fall is my favorite season but I still feel a trifle melancholy at such moments. Summer is such a fleeting season, particularly on the heights, and the interval between fall and the first snowflakes often is much briefer yet.

(Even briefer than I imagined on the day of our hike. Two weeks later those first flakes — quite a few of them, actually — plastered the Elkhorns.)

Autumn snow tends to be ephemeral, though, and generally the early storms only interrupt, without ending, the hiking season on this part of the Crest Trail.

I’ve ascended to Angell Pass several times during October, and aside from one year when an unusually vigorous Pacific storm slathered the trail with several inches of soggy snow — the sodden antithesis of the powder for which the nearby Anthony Lakes Ski Area is renowned — the conditions have been idyllic, at least for me.

I like to hike in chilly temperatures because the exertion warms you, in the manner of a well-kindled woodstove, but without the unpleasant feverishness of summer.

And nothing in nature quite rivals the splendor of a thicket of tamaracks glowing gold in the crystalline autumn sunshine, when the sky paints with a shade of blue unique to the season, a shade you couldn’t replicate no matter how long you tinkered the Photoshop’s pallets and pixels.

The Crest Trail in October also tends to be in fine shape. The tread is plagued neither by the clinging dust of August nor the patchy mud of June, when the preceding winter’s snow still clings to sheltered ground.

In any season, though, I find this part of the trail endlessly interesting from a historical standpoint.

It is as I mentioned the newest section of the Elkhorn Crest Trail, built in 1984.

The trail’s history dates back more than a century, however, and it starts not with hikers but with sheep.

In the late 19th century, decades before the federal government started confining livestock grazing to particular places and times, forage on public land was claimed a first-come, first-served (or, rather, munched) basis.

One of the popular routes for sheepherders to drive their woolly bands between summer and winter pastures followed the main ridge of the Elkhorns. When Forest Service officials decided in the late 1960s to build the Crest Trail, that old sheep trail served as a rough template.

The original Crest Trail, which was built over several years in the ’60s and early ’70s, started near the top of the ski area’s chairlift.

Its southern terminus, about 17 miles away, was at Pole Creek Ridge northwest of Sumpter.

Forest Service managers wanted to extend the trail to Marble Creek Pass but the project stalled for several years until Joaquin “Moose” Stephens, who worked for the Baker Ranger District, nominated the Elkhorn Crest Trail as a national recreation trail.

In 1981, the year after Congress designated the trail as such, the Forest Service hired a contractor to build that seven-mile stretch from Pole Creek Ridge to Marble Creek Pass, which remains the southern trailhead.

But the story of the Crest Trail wasn’t quite finished.

In the early 1980s Forest Service officials decided to move the northern trailhead to a more accessible spot just off the Anthony Lakes Highway and less than a quarter mile from the ski area.

The agency hired a contractor in 1984 to build 3.3 miles of trail from that trailhead over Angell Pass and on to Dutch Flat Saddle, where it meets the “old” Crest Trail.

I relish this “new” part of the trail — a relative term, certainly, for something that dates to Reagan’s first term, when cellphones were about as realistic as “Star Wars” and vinyl records were not considered retro — because it’s the only section that has a significant amount of elevation change.

The Crest Trail overall is renowned not only for its expansive views — on a clear day you can see peaks in Idaho and Washington as well as a goodly chunk of Northeastern Oregon — but also for its absence of steep grades.

For most of its 24 miles the trail, which certainly deserves its “crest” moniker, stays between 7,500 and 8,100 feet, rarely ranging far from the spine of the Elkhorns.

The exception is the 3-mile stretch from the northern trailhead to Angell Pass, over which the trail gains about 1,200 feet as it climbs to the crest.

Stephens told me that the trailbuilders had to use ample quantities of explosives to hack the trail through the obstinate granitic rocks of the Bald Mountain batholith, a formation that makes up most of the northern half of the Elkhorns.

In several places along the way you can find circular depressions in rocks, about as wide as the top of a soda can and perhaps an inch deep but perfectly circular.

These are what’s left of the holes workers drilled in the rock and then stuffed with explosives.

From Angell Pass you have multiple options if you’re interested in a hike longer than six miles.

Turn right from the saddle and you’ll be on the old Crest Trail, now known as Crawfish Basin Trail for the broad alpine meadow below and to the southwest.

This trail leads two miles back to the old trailhead. From there you can take the steep but short (about three-quarters of a mile) detour to the top of the Lakes Lookout, or hike the rough road to the east for a mile or so to Anthony Lake. A spur trail off the road goes to Hoffer Lakes.

The trail is open to hikers and horses but closed to mountain bikes. There is a network of mountain bike trails, which also serve as Nordic ski trails during winter, in the area.