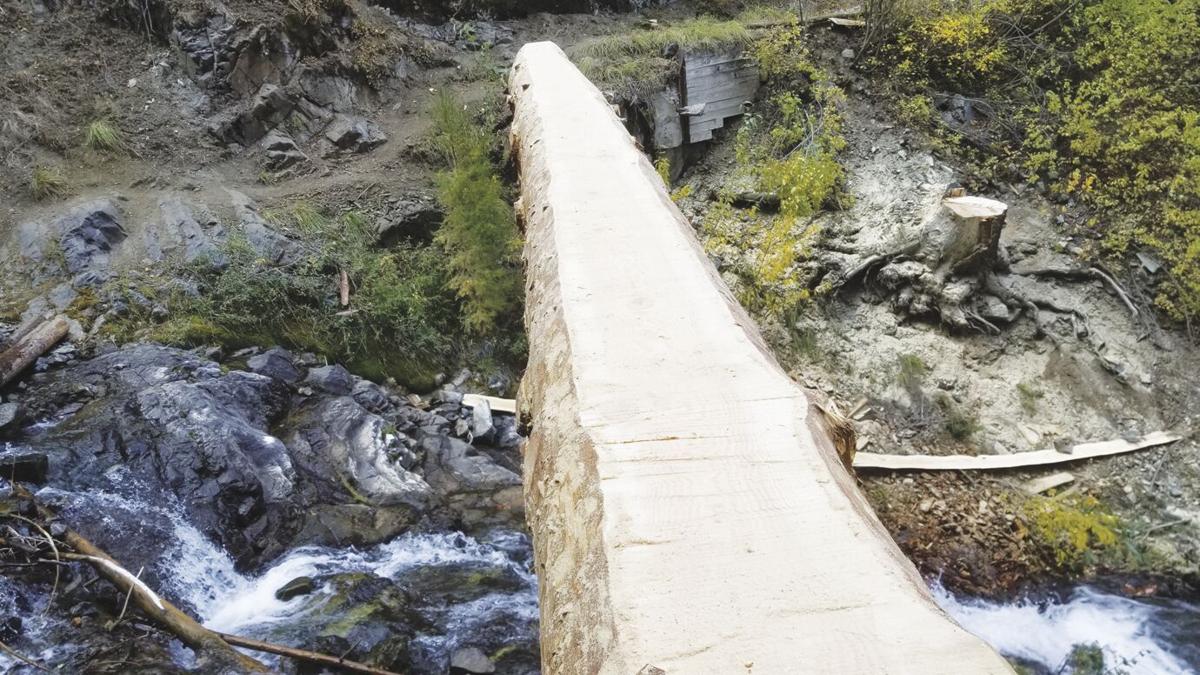 This photo from the fall of 2020 shows the log in place and its top sawed flat. The tree’s stump is at the right side of the photo. 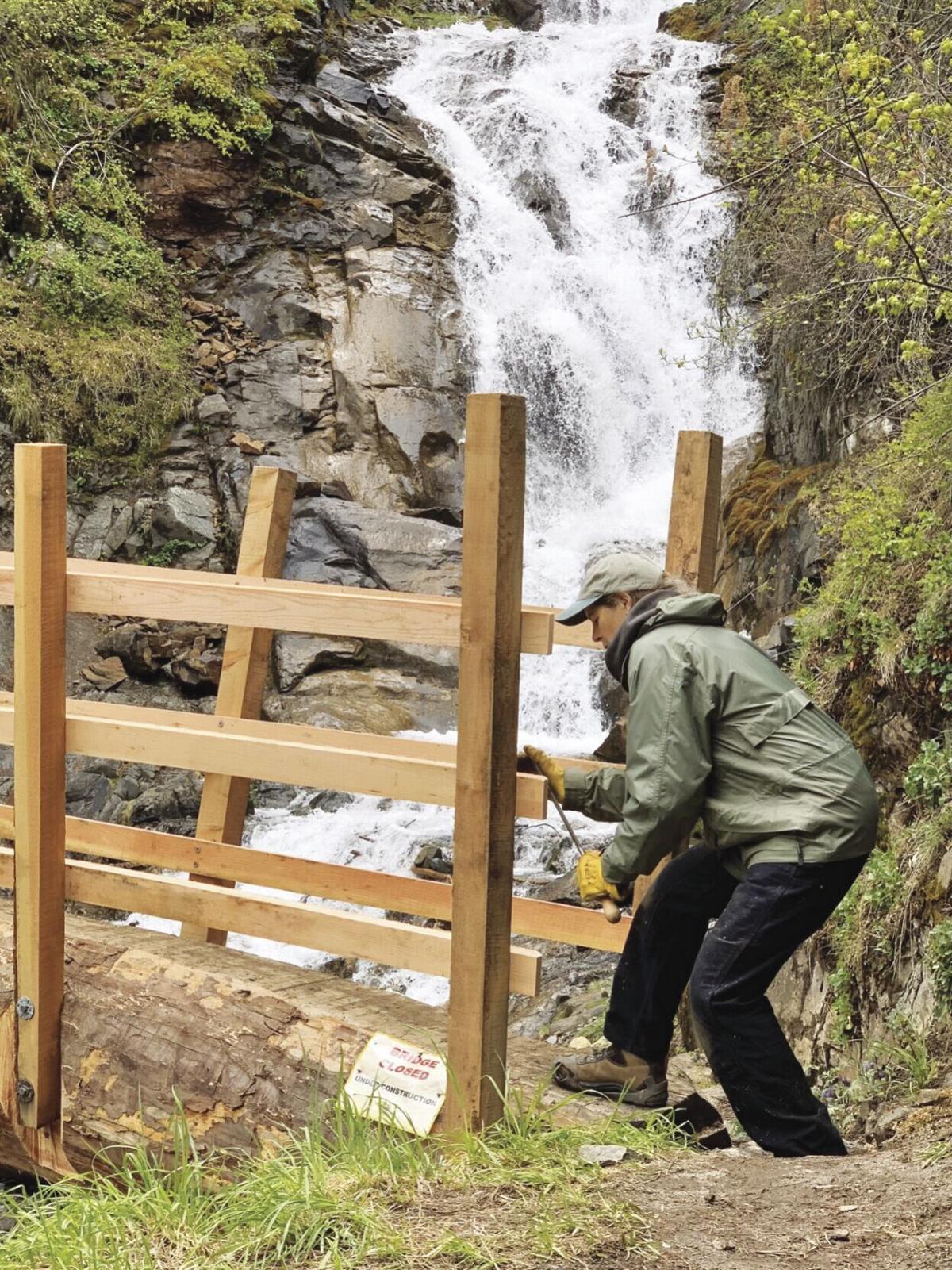 Randi Jandt of the Wallowa Mountains Hells Canyon Trails Association attaches a rail to the new bridge spanning BC Creek on the Chief Joseph Mountain Trail near Wallowa Lake on May 22, 2021. 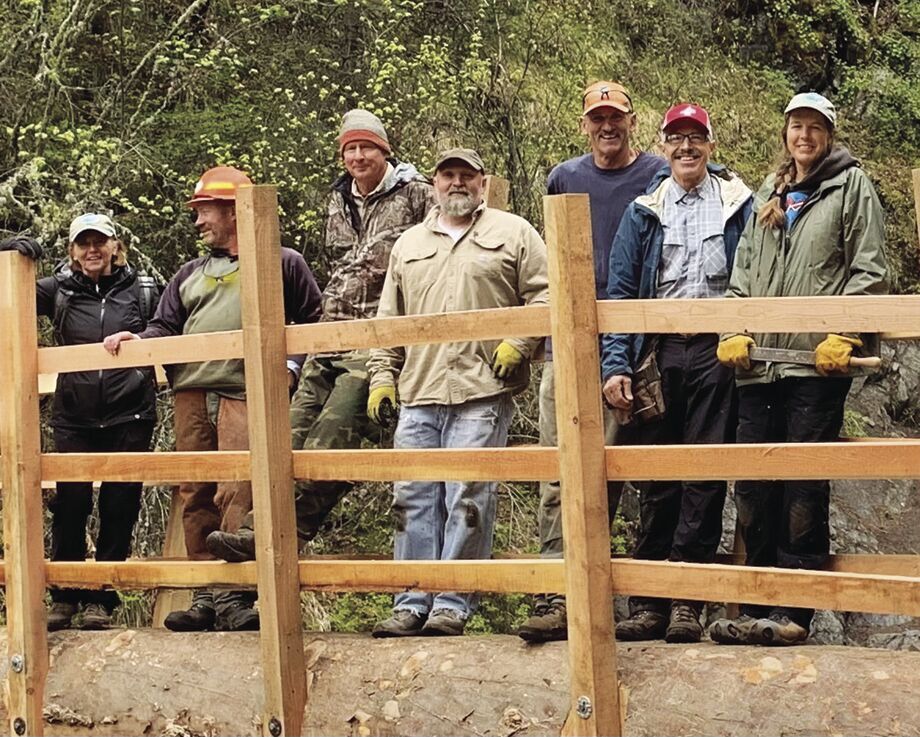 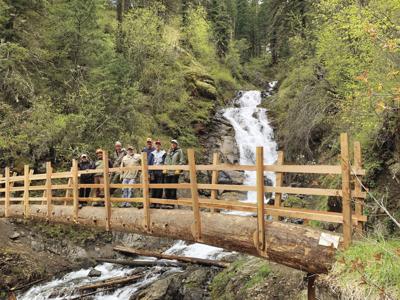 This photo from the fall of 2020 shows the log in place and its top sawed flat. The tree’s stump is at the right side of the photo.

There was a big problem on the trail at BC Creek, on the edge of the Eagle Cap Wilderness near Wallowa Lake.

Fortunately the solution was standing right beside the fast-flowing mountain stream.

And it was big, too.

Fixing the problem required toppling several tons of Douglas-fir in dangerously steep terrain and then wrestling the obstinate mass into place.

All this in a spot where winter is the longest season.

Little wonder that constructing a new bridge across BC Creek, along the Chief Joseph Mountain trail, spanned parts of two years.

The single-log bridge, with hefty rails on each side, was finished Saturday, May 22.

Its completion gives hikers an easier, and safer, route to one of the grandest vistas in the Wallowas, from the shoulder of Chief Joseph Mountain.

John Hollenbeak, trails coordinator on the Wallowa-Whitman National Forest, was involved from the start, wielding the chain saw that brought down that massive Douglas-fir in August 2020, among other tasks.

He said the job, despite its difficulties, “worked out as good or better than I’d hoped.”

The project also epitomized the sort of public-private partnership that has become increasingly important in maintaining trails and bridges in Northeast Oregon’s vast backcountry, including the Eagle Cap Wilderness, Oregon’s largest at 365,000 acres.

“It was a huge collaborative effort between the Forest Service and the Trails Association,” Hollenbeak said.

The Association in this case is the Wallowa Mountains Hells Canyon Trails Association.

The Association’s executive director, Rick Bombaci, applied for the grant through Travel Oregon that paid for the lumber, metal hardware and other material needed to transform a log into a bridge.

And about 15 members of the volunteer group hauled materials up a mile and a half of trail or did other tasks during the project, said Russ West, the Association’s chairman.

“It was a great project, something that will benefit the community,” West said. “It’s a high-use area, and a very scenic trail.”

The Chief Joseph Mountain trail has long been a popular hiking route, in part because of that aforementioned view, but also because the trail is easy to get to.

The route starts at the Forest Service trailhead just south of Wallowa Lake. Hikers follow the West Fork Wallowa River trail, which leads to the Lake Basin, Ice Lake and other popular wilderness destinations, for about a third of a mile before branching off onto the Chief Joseph Mountain trail.

That trail contours along a steep slope that rises above Wallowa Lake.

About a mile and a half from the trailhead, the trail crosses BC Creek, the biggest stream draining the east side of Chief Joseph Mountain.

Just upstream from the trail, the creek plunges down a series of rocky steps, a waterfall long popular with sightseers and photographers.

The best view of the falls happens to be just about the middle of the stream. This was an easy place to reach.

On that day a cloudburst transformed BC Creek into a torrent of mud, rocks and debris that swept away the bridge spanning the stream.

The same storm spawned a mudslide that destroyed the dining hall of the Boy Scout camp near Wallowa Lake.

The destroyed bridge was no flimsy structure, Hollenbeak said.

The 56-foot-long bridge was a traditional design, with parallel stringers and planks about seven feet long. The bridge was designed to accommodate horses as well as hikers, he said.

The flotsam that plucked the bridge loose also damaged the roots of an old Douglas-fir on the north bank of the creek — the tree destined to bridge the stream.

But that was almost two decades later.

In the years that followed the 2002 storm, hikers had two options, Hollenbeak said.

If they wanted to hike the complete Chief Joseph Mountain trail they had to ford BC Creek. In high water that was quite a dangerous undertaking, he said, as there is a waterfall downstream as well as upstream. And even when the creek had receded during late summers, the combination of slick rocks and the steep terrain were problematic.

“It was pretty tough,” Hollenbeak said. “In my opinion it was fairly hazardous to cross.”

The second option was to hike a connector trail that starts near the fish-cleaning station at Wallowa Lake State Park. This trail intersects the Chief Joseph Mountain trail roughly a mile north of BC Creek.

Although the Forest Service improved the connector trail, and Trail Association volunteers have helped to maintain it, the route is steeper than some hikers prefer, Hollenbeak said.

And although the connector gives hikers access to the view from Chief Joseph Mountain, it doesn’t improve access to BC Creek and its waterfall.

The initial plan, West said, was to use a helicopter to hoist parts of a bridge at the Boy Scout camp that had been damaged in the 2002 mudslide, then reassemble them at BC Creek.

That was the purpose of the $40,000 grant from Travel Oregon that Bombaci secured.

The problem, Hollenbeak said, is that installing the bridge from the Boy Scout camp would have required considerable drilling and pouring much concrete, which would have been difficult and expensive.

Hollenbeak said building another stock bridge, similar to the one destroyed in 2002, likely would have cost well in excess of $100,000.

“So that left plan B, which was to use native materials,” West said.

And there happened to be one big piece of native material that was conveniently located.

Hollenbeak said he was a bit surprised the tree had survived the 2002 washout, which exposed much of its root structure.

A single-log bridge would not be accessible to horses, but Hollenbeak said the Chief Joseph Mountain trail isn’t particularly popular for riders, in part because it doesn’t lead to a lake as so many trails do in the Eagle Cap Wilderness.

In August 2020 Hollenbeak, accompanied by West and several other Trails Association members, hiked to BC Creek to bring the tree down.

West said Hollenbeak’s situation was so precarious, as he ran the chain saw, that West, who’s a mountain climber, used his climbing gear to secure Hollenbeak in case of a fall.

Hollenbeak said the fir fell just about where he hoped it would, with its top falling across the trail south of the creek.

After cutting off that section, the butt end had to be winched into place by means of human-powered chain hoists.

First, though, he and other workers had to trim the limbs and peel off the bark (barkless logs last much longer, as they’re less susceptible to rotting).

The latter task was no small job, Hollenbeak said.

Over the course of multiple weekends last summer and fall, Hollenbeak and Trails Association volunteers continued the project. After moving the log into place they used steel spikes to pin it in place. The north side of the log is connected to solid rock, Hollenbeak said.

He used the log’s natural bend to make the bridge stronger, by rolling it so that it curved up in a shallow arch over the stream.

Hollenbeak used a chain saw to cut a tread into the top of the log. The tread is at least 12 inches wide, and up to 13 1/2 inches in places, he said.

Heavy snow fell before workers could attach the upright 4-by-4 support posts and 2-by-4 horizontal railings, which were milled by JayZee Lumber in Joseph.

Work resumed on May 17, and the bridge was completed five days later.

Hollenbeak, who has built other single-log bridges, including a longer span across the West Fork of the Wallowa that accesses the popular Ice Lake trail, said the BC Creek project was “more of a challenge” than most due to the steep terrain.

“I was just ecstatic to finish it up without anyone getting hurt,” he said.

You can find out more about the Wallowa Mountains Hells Canyon Trails Association at its website, www.wmhcta.org. The Association also has a Facebook page and Instagram feed that has photos of recent projects.