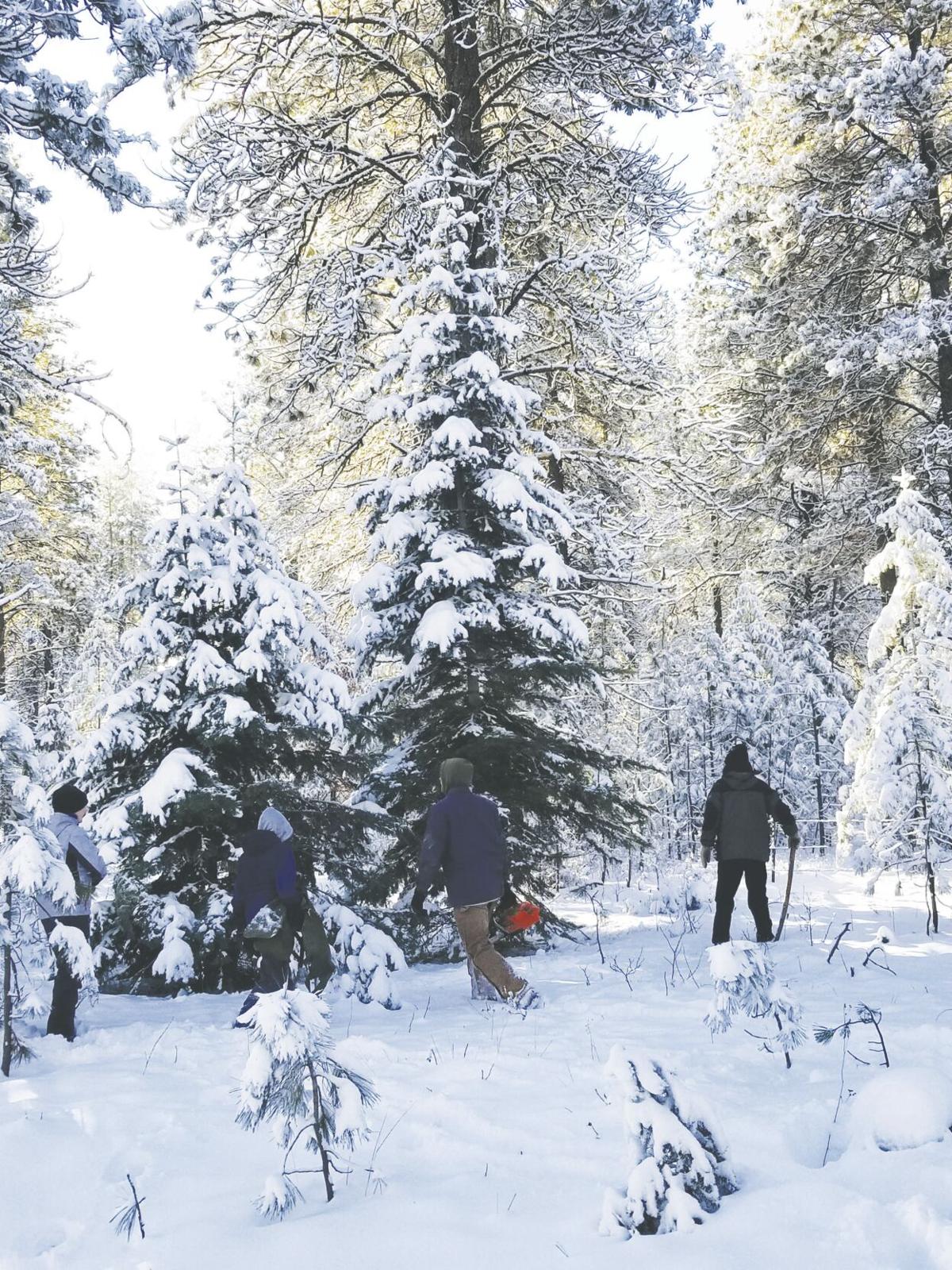 Searching the woods near Phillips Reservoir, southwest of Baker City, for a Christmas tree during a previous December. 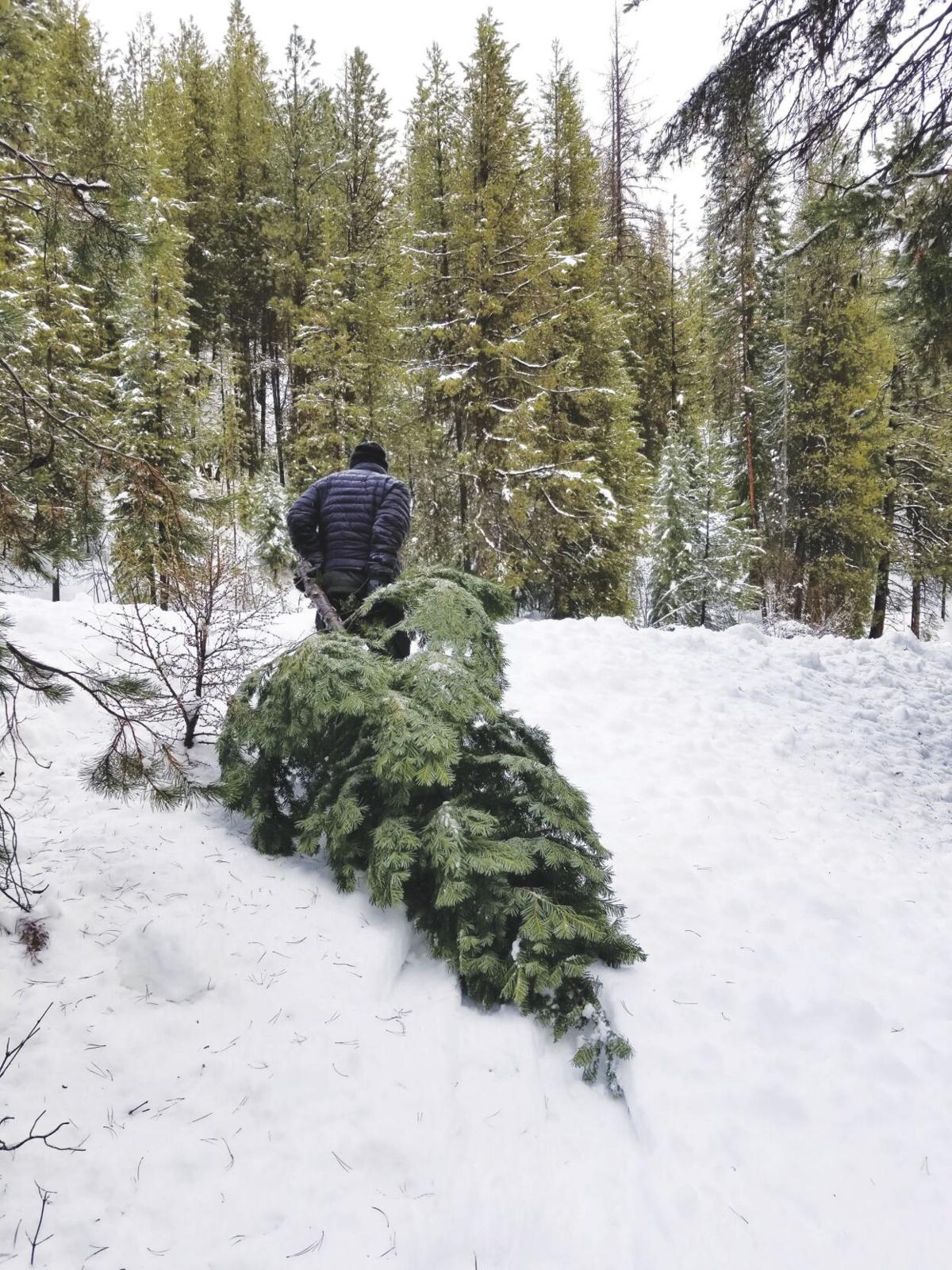 Dragging a grand fir near Sumpter.

This year, I thought smugly, I had the Christmas tree problem solved before Halloween.

As problems go, this one hardly rates on the hassle scale, to be sure.

Collecting each year’s tree, a task I’ve set for myself for going on 30 years in the Blue Mountains, could reasonably be called recreation.

The endeavor has much in common with hunting.

Except I carry a saw rather than a rifle, and my quarry, though elusive, lacks the ability to flee.

The conundrum, though, lies in the choice.

And here the comparison between hunting Christmas trees and, say, elk, withers considerably.

(There are exceptions to this claim, I’ll concede. But they are rare enough that we needn’t bother with them here.)

An elk hunter who gets within range of a fine bull might feel a certain pressure to take the animal, under the reasonable expectation that this might be the only chance to put meat in the freezer.

But when it comes to Christmas trees the sheer number of firs and pines and spruces presents a very different sort of decision for the hunter.

I fall prey to this most years.

We’ll come across a tree — I’m usually accompanied by my wife, Lisa, and our kids, Max and Olivia — that satisfies our general standards for height and symmetry. A tree lacking the gaping gaps between branches that can’t be camouflaged with lights or ornaments. A tree with a straight trunk that will sit solidly in the stand.

But then I’ll look around and see, on a distant ridge or sheltered in a vale, a tree that I’m convinced might be even more comely.

Almost always I succumb to the temptation to tromp through the snow to have a better look.

Often as not the other tree — the first tree — will end up strapped to the top of our FJ Cruiser or tossed into the bed of a pickup borrowed from Lisa’s parents.

But although I always come around to thinking each year’s tree is a beauty, I can never completely suppress the idea that the perfect specimen was nearby and that I could have claimed it had I only had more patience.

This year was supposed to be different.

We were hiking along Union Creek, just north of Phillips Reservoir, in October, searching for a geocache.

We didn’t find it.

But we did see a shapely grand fir that on that autumn day, even with no snow to add the seasonal grace to its branches, seemed ideal.

I took a photo with my cellphone and figured that, for the expenditure of a few megabytes, the annual debate was over before it started.

Not only did I know where we would go — that choice can be as agonizing as picking the actual tree — but I even knew which tree would fall to my saw.

We did return to Union Creek as intended, on the morning of Nov. 28.

But we didn’t find the tree.

And I left my phone in the rig so we didn’t have the photo to verify the location.

(Not that the image would have offered much guidance; the photo lacked any background for context, and the fir it depicted might well have been growing anywhere in the Blue Mountains. Apparently this didn’t strike me as a potential problem when I took the photo.)

And so we ended up doing what we always do. We fanned out across the slope on the west side of the ice-coated stream. Occasionally someone would call out something along the lines of, “hey, look at this one,” and we’d congregate to have a look, like judges comparing the attributes of sheep at a county fair junior livestock show.

Eventually we settled on a tree, a grand fir with the dark green needles we prefer.

Its flaws, inevitably, suddenly became obvious only at home, after I had tightened the bolts that hold the tree in the stand.

But once Lisa had draped the fir with a few hundred multicolored lights, and the kids had loaded its limbs with the ornaments, that roster of pieces so familiar and so beloved, the tree’s shortcomings disappeared. I couldn’t imagine any other tree standing its place.

I have in previous years thought about finding our Christmas tree during a summer hike, plotting its location on a GPS receiver and even tying a bit of ribbon to a limb, in case the orbiting satellites were on the fritz on tree-cutting day months hence.

But I never seem to get around to doing it.

I don’t much mind, though.

It’s better, I think, that the Christmas spirit is unique to its brief season. The idea of choosing a Christmas tree during a sweltering July afternoon seems inappropriate.

To return to the elk-hunting analogy, it wouldn’t be much of a hunt if you had a 6-point bull tethered in a field, waiting for opening day.

Christmas tree permits cost $5 and can be bought online www.Recreation.gov, at Forest Service offices and at many local businesses. For a list go to https://www.fs.usda.gov/wallowa-whitman/  Permits are valid only for cutting a tree on national forest land. Regulations for cutting Christmas trees include:

• Pick a tree at least 50 feet from a road, more than 1/4 mile from wild and scenic rivers, and not within sight distance of a state highway.

• Leave stumps no higher than 10 inches

• Cut off any green limbs on the stump; these can be taken with the tree for decorating.

• Maximum height for a tree is 15 feet, with a stump no more than 6 inches in diameter.

The forests of the Blue Mountains are an eclectic mix of conifers, some better suited than others as Christmas trees.

This species probably graces more local living rooms during the holidays than any other type of tree.

A telltale trait of the grand fir is its needles. They form flat rows on opposite sides of each branch.

Full-grown subalpine firs are easy to recognize from their slender, dart-like shape. But in juvenile form they sometimes resemble grand firs.

A distinguishing characteristic of the subalpine fir is its needles. They grow at all angles from the limb, rather than in flat, orderly rows as a grand fir’s do.

Although subalpine firs usually grow at higher elevations than grand firs, the two species occasionally mingle between about 5,500 and 6,000 feet.

A person might mistake a spruce for a fir, but there’s an easy way to tell which is which: Grab a limb.

If you think you just poked a porcupine, you just touched a spruce.

Spruce needles are stiff and have prickly edges, unlike the softer, more finger-friendly firs.

Spruce trees usually grow in wet areas, and often are found in groves near streams.

Lodgepoles of the right height tend to be a bit sparse of limb and a bit unkempt in appearance, as though they had slept in an alley.

Lodgepoles are the only pines native to Oregon whose needle bundles contain two needles (ponderosa pines have three needles per bundle, white and whitebark pines five).

Forest Service officials encourage Christmas tree hunters to not cut any of these species, although it is legal to take home any of the three.

Ponderosa pine and Douglas-fir are the most valuable commercial trees on all three national forests in Northeastern Oregon, so Forest Service officials prefer to preserve as many as possible.

That’s not a troublesome task, though, because neither species is much coveted as a Christmas decoration. A few families are faithful to ponderosa pines, but their long, limber needles defy even nimble-fingered ornament-hangers.

Douglas-fir is a favorite Christmas tree species in Western Oregon, where they’re as abundant as dandelions, but grand firs are equally graceful and, in parts of Eastern Oregon, more plentiful.

Our Douglas-firs, at least the adolescent ones that are the right size for a Christmas tree, often seem slightly sickly.