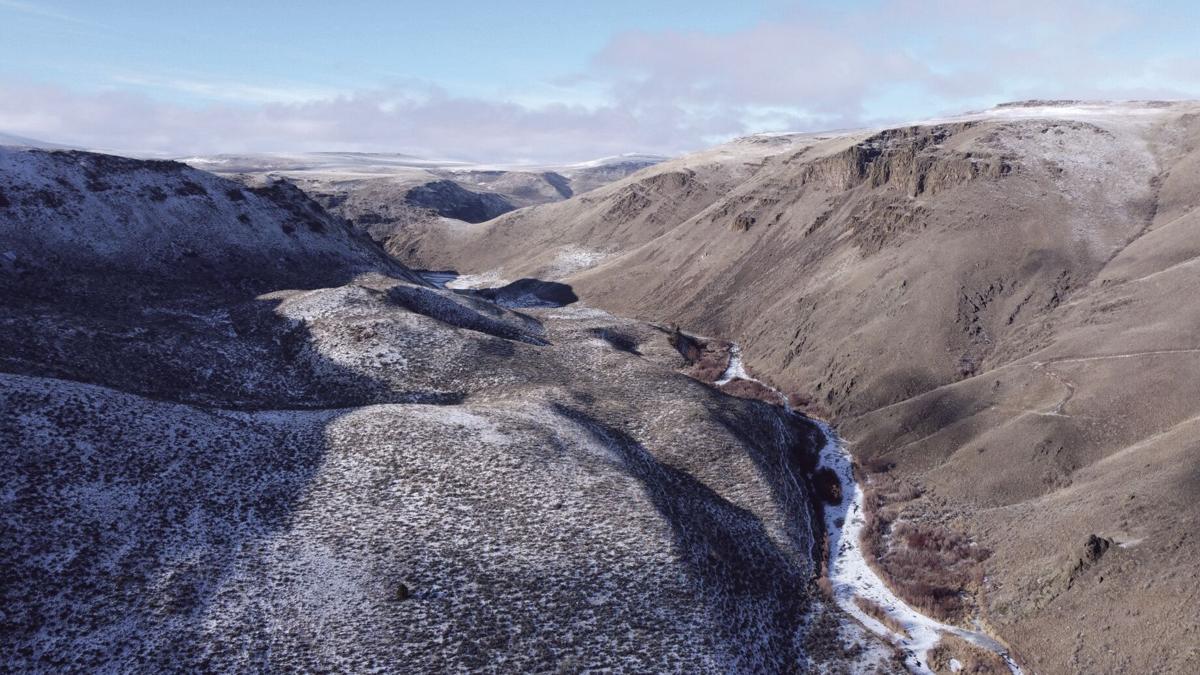 Looking up in the Powder River Canyon between Thief Valley Reservoir and Keating. 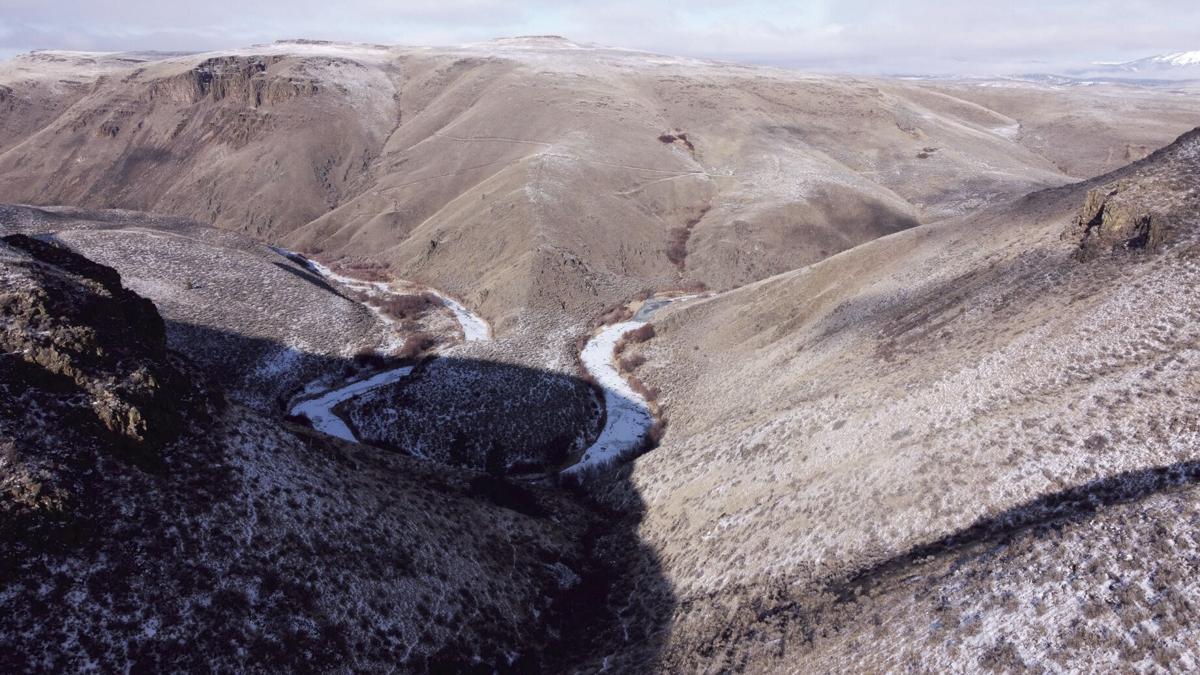 The big bend in the Powder River in its remote canyon upriver from Highway 203 in northern Baker County. 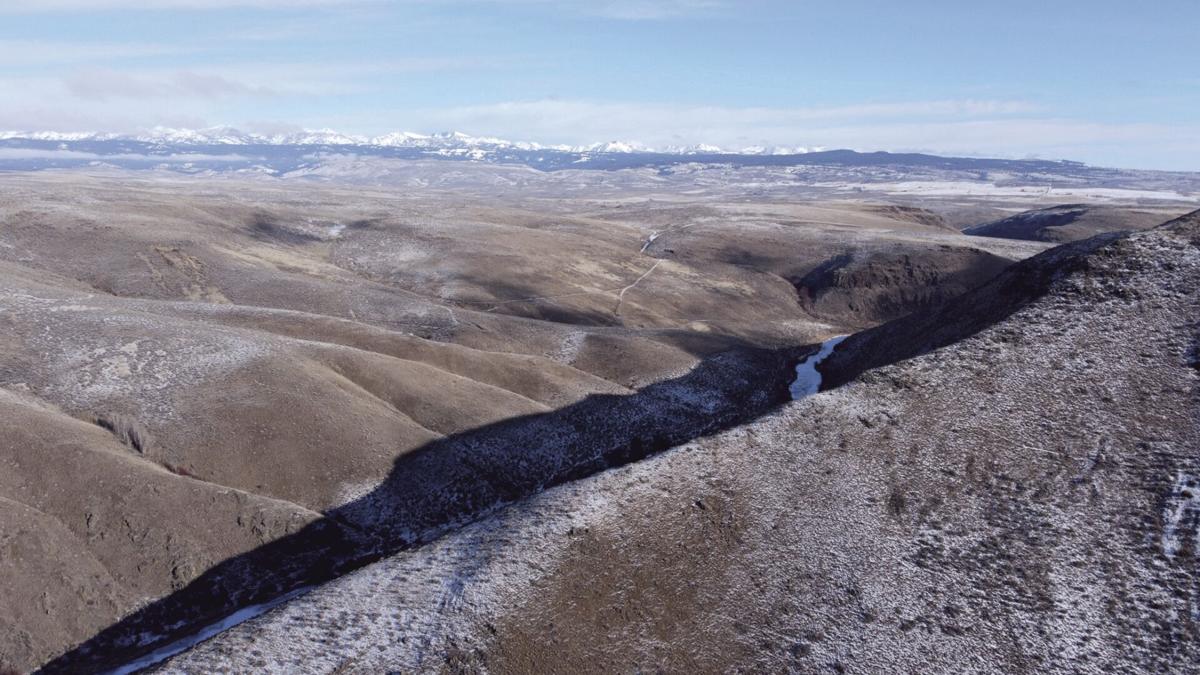 Looking across the Powder River Canyon at the Wallowa Mountains.

Looking up in the Powder River Canyon between Thief Valley Reservoir and Keating.

Looking across the Powder River Canyon at the Wallowa Mountains.

Hells Canyon is an attention hog.

Not that it’s undeserving of the accolades.

The canyon is rather more than a modest gash on the Earth’s surface, after all.

But it seems to me that the publicity lavished on Hells Canyon, North America’s deepest river-carved gorge at nearly 8,000 feet, leaves another significant chasm neaby to languish in obscurity.

Yet the canyon excised by the Powder River in northern Baker County, were it not 30 miles or so from the immense maw of Hells Canyon, likely would be much more renowned than it is.

The Powder River Canyon’s retiring nature has much to do with its remoteness.

No paved highway penetrates this canyon, and no signed overlook extolls its natural virtues.

You can’t book a ride on a commercial jetboat through the Powder’s rapids — whitewater that is, to be sure, little more than a mild riffle compared with the Snake’s great rapids such as Wild Sheep and Granite Creek.

Indeed, it’s difficult to even get a glimpse of the Powder River Canyon’s deepest spots unless you have a competent off-road vehicle or are willing to undertake a moderately taxing hike.

The canyon lies between one road that’s well-traveled — Interstate 84 — and another that’s decidedly not — Highway 203.

To explore the canyon you’ll need to drive that highway, which connects to the freeway near La Grande and near Baker City, passing through Union and Medical Springs in between.

The unimproved dirt (or, often, mud) road that leads to the canyon leads west from Highway 203 near Milepost 28 (distance measured from Union). If you’re coming from Baker City, the junction is a few hundred yards past the highway bridge over the Powder. If you’re coming from La Grande or points north, the turn is just past Miles Bridge Road.

This dirt road is best avoided on mild winter days when its surface is apt to resemble a particularly viscous type of porridge. Presuming it’s not, drive about 2.3 miles to a cattle guard on the rim of another canyon, this one even less known but still impressive and picturesque. This defile was carved by Big Creek, a Powder River tributary that heads in the Wallowa Mountains.

Unless you have an ATV, this is a good place to park and start walking. The road makes a steep (and boulder-strewn) descent to Big Creek. During a typical winter the stream is iced over sufficiently to afford a relatively easy crossing.

Beyond Big Creek the road, as canyon roads are wont to do, regains all the lost elevation. Near the top of the 200-foot climb the road makes a switchback to the right. This knoll is a fine viewpoint of the canyon.

The road heads northwest across a stony plateau for half a mile or so, then descends briefly to a junction. Head left, downhill, past a spring in a draw that includes an aspen grove. Continue a short way to get a fuller view of the canyon. This is a good turnaround spot. To this point the road is on BLM ground, but there are parcels of private land upcanyon.