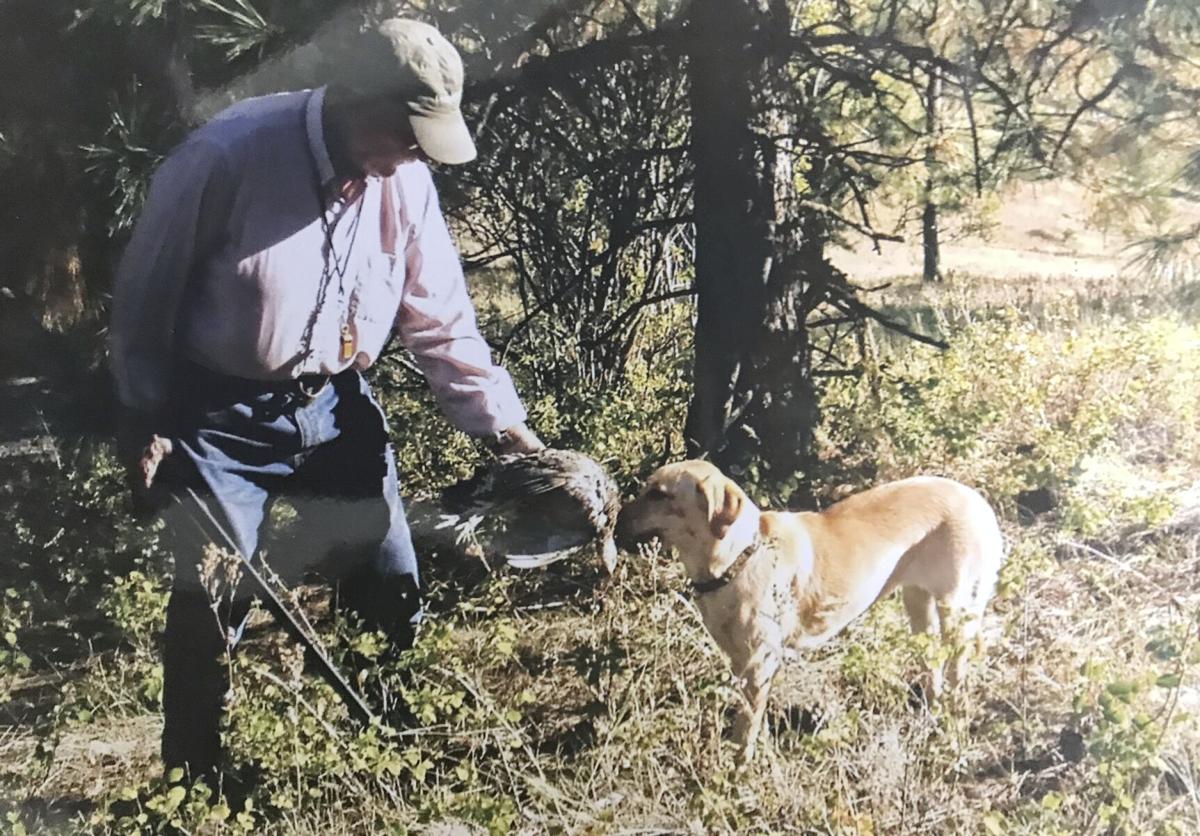 Gene Bieraugel shows a blue grouse he bagged to his dog, Cedar, in northern Wallowa County. Bieraugel has been hunting for seven decades and goes after nearly everything available from the couple’s home west of Flora. 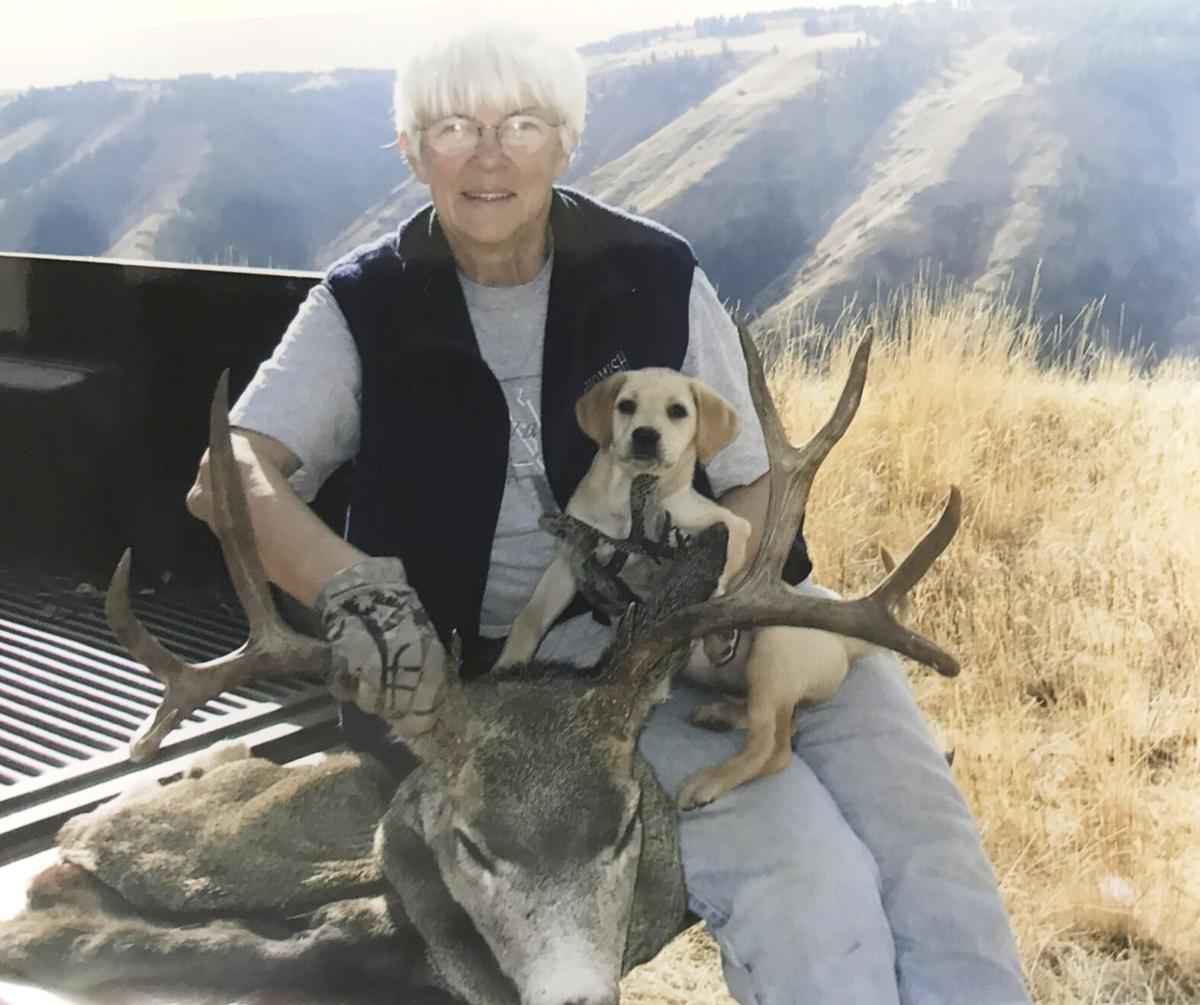 Marge Bieraugel shows a 3-by-4-point mule deer buck she shot in a canyon near their home west of Flora.

Gene Bieraugel shows a blue grouse he bagged to his dog, Cedar, in northern Wallowa County. Bieraugel has been hunting for seven decades and goes after nearly everything available from the couple’s home west of Flora.

Marge Bieraugel shows a 3-by-4-point mule deer buck she shot in a canyon near their home west of Flora.

FLORA — Gene Bieraugel hunts anything and everything and has for most of his nearly 81 years.

"Why? It's part of our heritage and because I know where my food comes from. It hasn't been processed like in some pig factory or chicken factory," he said. "Like somebody once said, most of the people in America don't know where their food comes from. They take no responsibility in gathering that food. And you know what? It's hormone free, the best organic product you can get."

The rural Flora man, who with his wife, Marge, hunts Wallowa County, other states and even Africa, Argentina and Canada, has varied reasons for his passion.

"It's partly for the freezer and partly because I know where it comes from," he said. "I take responsibility. When I get something, we process it right down to the last bit. Even cook up the scraps for our dog."

While Bieraugel is an avid hunter of nearly everything, he has a passion for birds, both waterfowl — he's heavily involved with Ducks Unlimited — and upland birds.

The primary birds he goes for in Wallowa County are chukars, which he said are not native to this continent, having been imported from Iran and Pakistan.

"They love the rugged, steep country. I'm kind of aging out of hunting them," he said.

Bieraugel likes going after the ruffed grouse with his 12-gauge, three-shot, semiautomatic Beretta.

"They're a feisty little bugger. They'll come along and attack your hubcaps," he said. "The blue grouse'll do that, too. They'll jump up on the hood of your car and look in the windshield and see themselves and peck at it."

He also likes going after Hungarian partridge, though they seem to be few in number.

"I don't know if anyone still hunts them because they're in small coveys," he said.

The numbers of grouse, too, seem to be waning.

"A couple of years ago, we had 36 of them in our yard and now we're lucky to see two or three," Bieraugel said. "I think the predators may be hard on them, but then maybe there's a life cycle that comes into play. But we have bobcats, skunks eating the eggs, hawks, even the little Cooper's hawks, which normally catch smaller birds, will take a grouse."

He said the blue grouse have been divided by the ODFW. Blue grouse are ones found on the west side of the Cascade Mountains and their near relations on the east side are now known as duskies. He said there's just a slight variation in color on their heads.

As for pheasants, Bieraugel doesn't hunt them in Oregon.

"You have to go back to the Dakotas for that," he said.

In fact, he's hunted in many states. Including the Dakotas and his native Minnesota. Texas is where he first hunted deer.

The retired Navy man bought their place near the old Courtney Butte Lookout west of Flora in 1976.

"In '95, we cut logs and started building our log home up here and moved here in 2001 permanently," he said.

And home is the best hunting. In fact, he said they have so many trophies mounted, they've run out of places to hang anymore.

"We can hunt when we walk out the door, though not necessarily birds," he said. "We get big game if we need it. Marge even shot a cougar."

Although they've collected many trophies, nothing ever goes to waste.

"We eat everything we hunt. Even the cougar. It's pretty good. It's a real light, pink meat. But the backstrap, it's tough," Bieraugel said.

One local bird the Bieraugels don't generally go after is wild turkeys. He said that can be addictive.

"We're really happy we've got such a variety of birds. We have turkeys, too, but only had a couple good hatches. We've got good turkey habitat," he said. "Once (hunters) get into it, they're really into it. But Marge and I have never gotten into it."