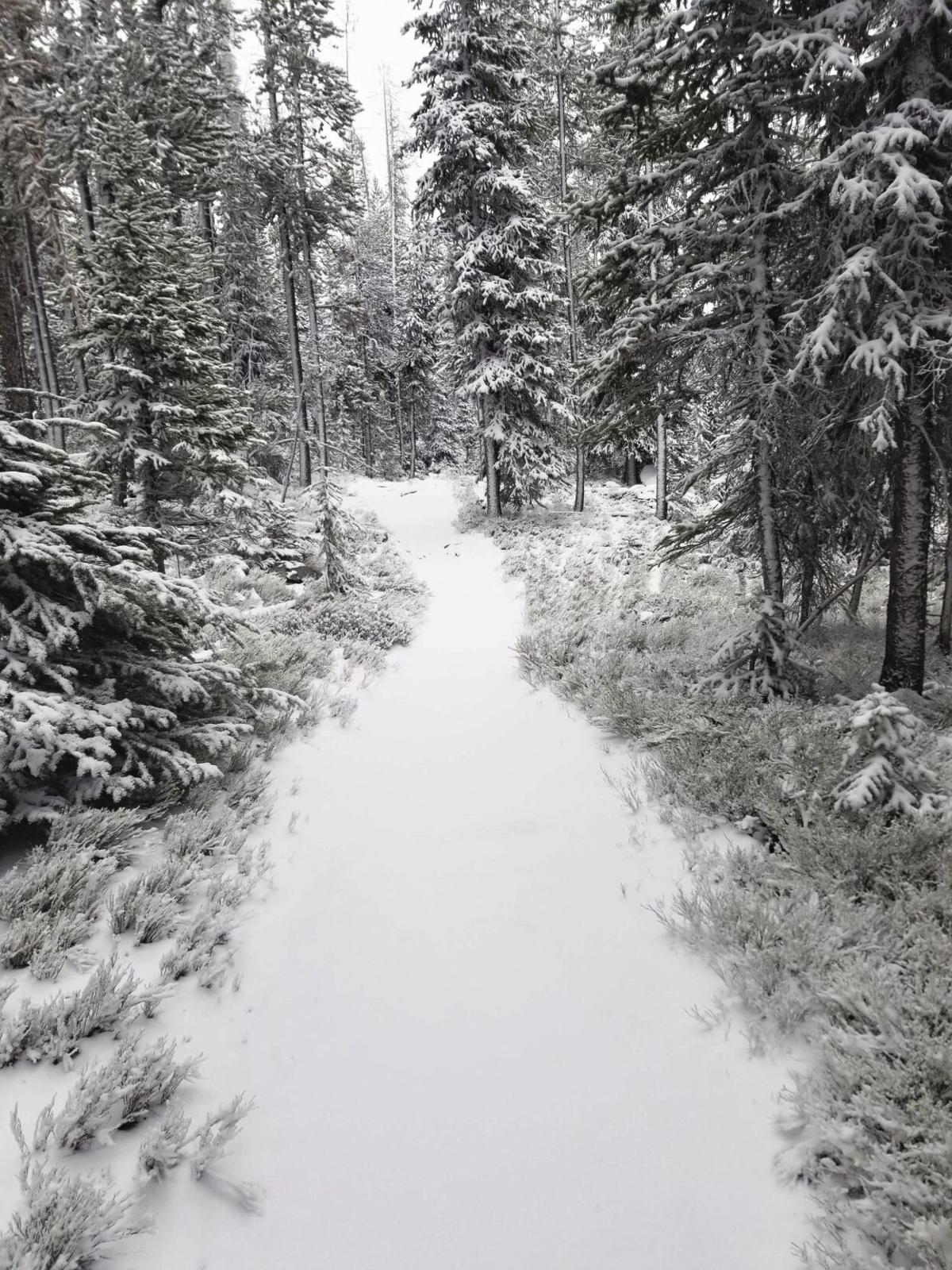 The Elkhorn Crest Trail wends through a forest of lodgepole pine and subalpine fir trees on the snowy morning of Oct. 11. 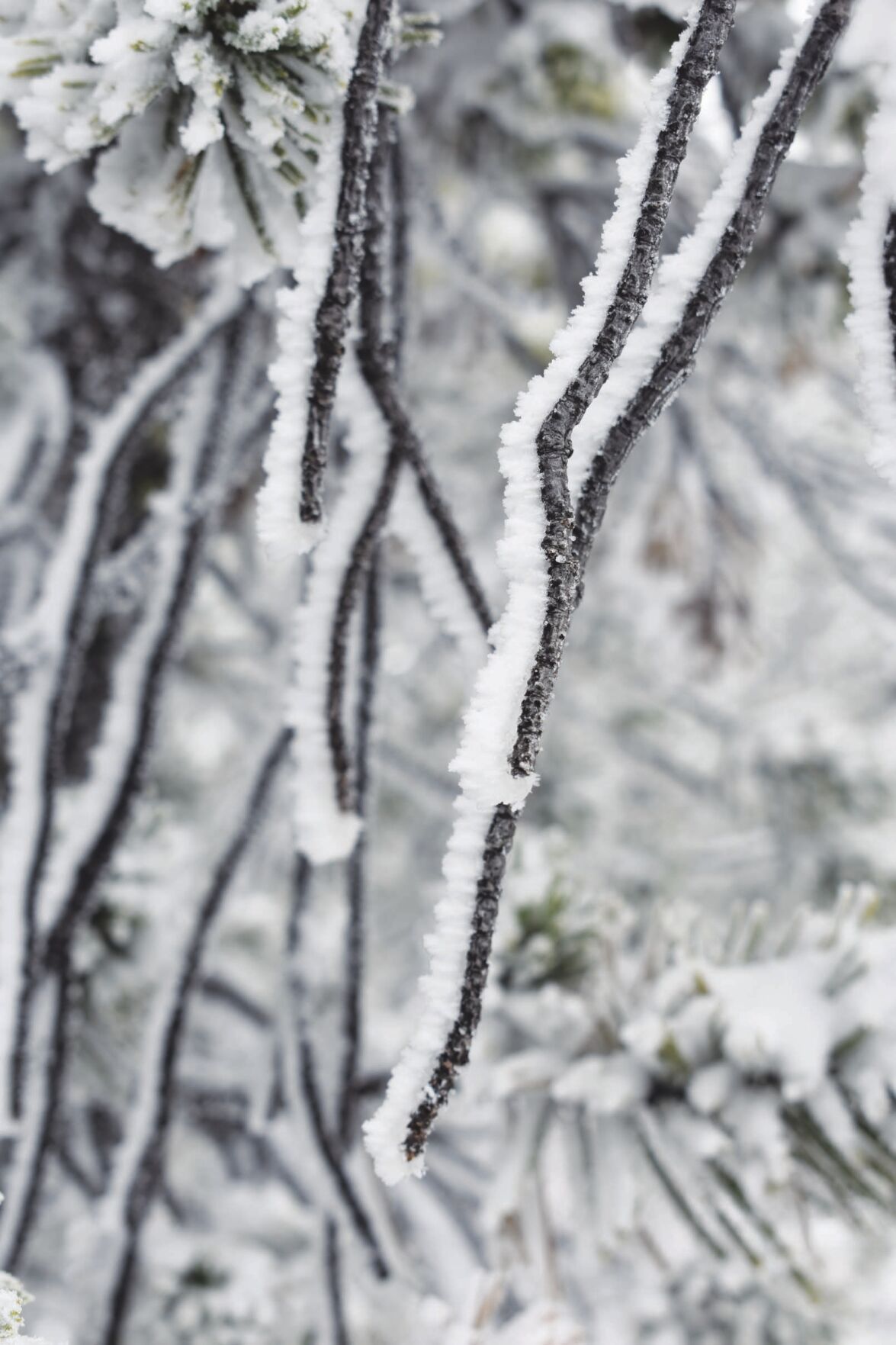 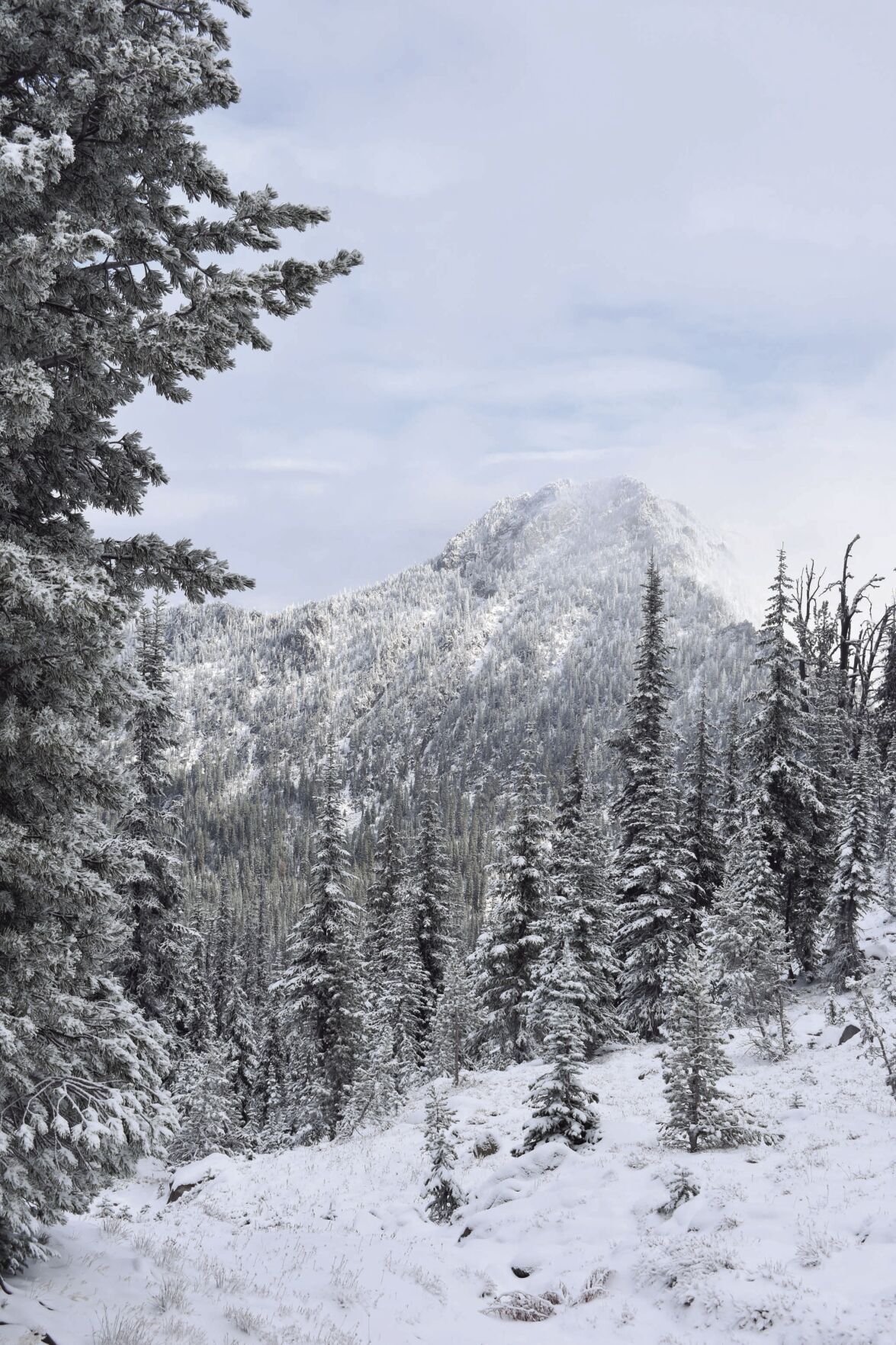 Van Patten Butte emerges from the clouds in this view from the Elkhorn Crest National Recreation Trail near Angell Pass the morning of Oct. 11.

The Elkhorn Crest Trail wends through a forest of lodgepole pine and subalpine fir trees on the snowy morning of Oct. 11.

Van Patten Butte emerges from the clouds in this view from the Elkhorn Crest National Recreation Trail near Angell Pass the morning of Oct. 11.

The first step onto a trail has a bit of magic in it, no matter how modest the measurement of a single stride.

That step reminds me of another movement that has power all out of proportion to the energy expended to make it: Turning to the opening page of a book.

In both cases the journey just begun is tinged with the thrill of the unknown. I believe this is so even if the trail is one you’ve hiked a dozen times, or the book one whose every page you have read.

No trip along a trail is the same.

Nature changes constantly. The quality of the light falling across a path is never identical. Wildlife heed none of the patterns or schedules that so dictate our lives. It’s not possible to predict whether a cougar or a bear will leap across the trail while you’re hiking but if one does you’re sure to remember that hike more vividly than the half-dozen other visits when you saw nothing more imposing than a squirrel.

So it is with books.

Your fifth exploration of a great novel can reveal insights about a character that you failed to notice during the four earlier readings. Or a particular passage will ring in your ears, as you read silently to yourself, with a piquancy previously hidden.

But no first step is quite so laden with anticipation, it seems to me, as the one you take onto a trail which bears a layer of fresh snow innocent of a single boot print.

To belabor the analogy, a snowy trail winding among the pines is akin to the new work of a beloved author.

I was fortunate to have this experience — hiking a snowbound trail, not reading a new book — the morning of Oct. 11 in the Elkhorn Mountains.

But this was a singular experience.

The snow coating the Elkhorn Crest Trail at its northern terminus near Anthony Lake wasn’t merely the latest layer laid atop many. That happens dozens of times per year in this alpine land where snow graces the ground on many more days than it does not.

This was the first significant snow of the season.

(A storm in late September briefly left a skiff of snow in the high country, but as is the custom with September snow, it did not linger long.)

As I latched the chest strap of my daypack across my down jacket — a garment only that morning removed from the bedpost where it has languished since early June — I looked from the parking lot to where the trail proper begins.

The path was a perfectly smooth sinuous surface between the lodgepole pines, as unblemished as the top of a just-frosted cake.

(The child’s finger even then plotting its larceny. Or perhaps an adult’s finger; I’m as helpless to resist the lure of buttercream as a 5-year-old. And I have longer arms.)

I have walked this path at least a few dozen times. It is the only part of the Crest trail accessible by a paved road, among its other attributes.

Yet as I stood there, waiting for my wife, Lisa, and our son, Max, to trudge across the parking lot and join me, I was more eager to get going than I would have been had this been a typical summer day.

Snow, as anyone knows who has looked outside on the morning after a blizzard, can infuse the most familiar scene with newfound luster.

The snow was little more than a trace by the standards of the Elkhorns, where a yardstick is a far more appropriate measuring device than a common ruler. But even the coating of an inch or so utterly transformed the trail, filling in its minor divots and leveling the places where tree roots aim to stub an unwary hiker’s toe.

(At least a few of these tend to get me every hike even though I scan for them constantly, like a soldier stepping gingerly on ground where mines might have been sown.)

As we climbed between the granitic outcrops through which the trail builders blasted the route in 1984, the snow deepened to a few inches.

And when we started up the final traverse toward Angell Pass the wind freshened and in places the gusts had scoured the trail clean, depositing the snow nearby in dune-like drifts.

The pass, as such clefts in mountain ridges usually do, was acting as a funnel for the wind. We had been here, the three of us, just 5 weeks earlier. Yet the place was scarcely recognizable.

On that early September afternoon the temperature was in the 60s and the sky nearly cloudless.

But this day was the epitome of winter, and never mind that it was only a couple weeks since the equinox.

We were, as Max aptly pointed out, not below the clouds but rather in them. A few snowflakes fell. And although it wasn’t especially windy on the ground we could hear the gusts groaning through the gnarled whitebark pines on the ridges above.

During the descent the clouds thinned and a milky sunlight filtered through the fleecy gaps. Suddenly the west face of Van Patten Butte emerged, its precipices looking as though they had been sliced from a solid block of granite by a skilled hand wielding a keen blade.

This stirring scene, the very essence of winter, seemed to me especially precious. Just a few days before I had mowed the grass, a task so redolent of summer and so antithetical to the sight of this snow-mantled peak, that it seemed queer that such things could so very nearly intersect both in time and place.

At the point where the trail curves away from the Antone Creek basin the view to the east includes a sliver of the North Powder Valley. The clouds had retreated just enough that we could see the valley. I was surprised at how bright the tawny, post-harvest fields looked.

Such is the contrast between seasons.

I marveled, as I often do, at my good fortune to live where these contrasts are so accessible, where I can bask in the mild autumn sunshine in my backyard, and little more than an hour later make the first tracks in the first snow on a trail where winter has arrived.

The northern trailhead for the Elkhorn Crest National Recreation Trail is along the paved Anthony Lakes Highway (Forest Road 73) about 4/10ths of a mile east of the Anthony Lakes Ski Area parking lot.

Angell Pass is a little more than 3 miles from the trailhead, with an elevation gain of about 1,100 feet.

The parking lot for the trailhead is not plowed during winter. The nearest maintained parking areas are close to the Anthony Lakes Ski Area Nordic Center, on the north side of Anthony Lake, and the main parking lot at the ski area.