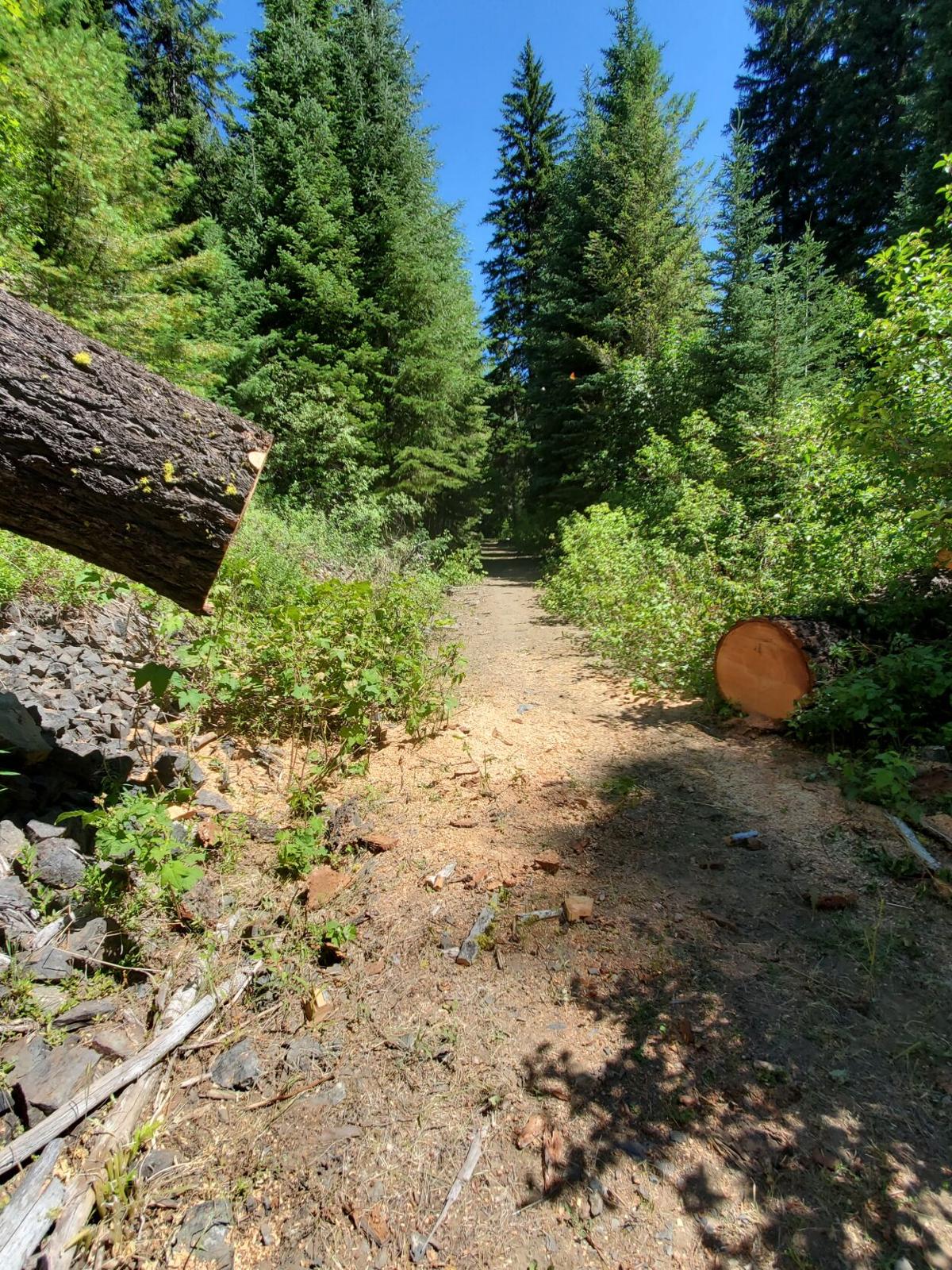 A freshly cut log made the hike on the Tempest Mine trail much easier on July 11, 2021. 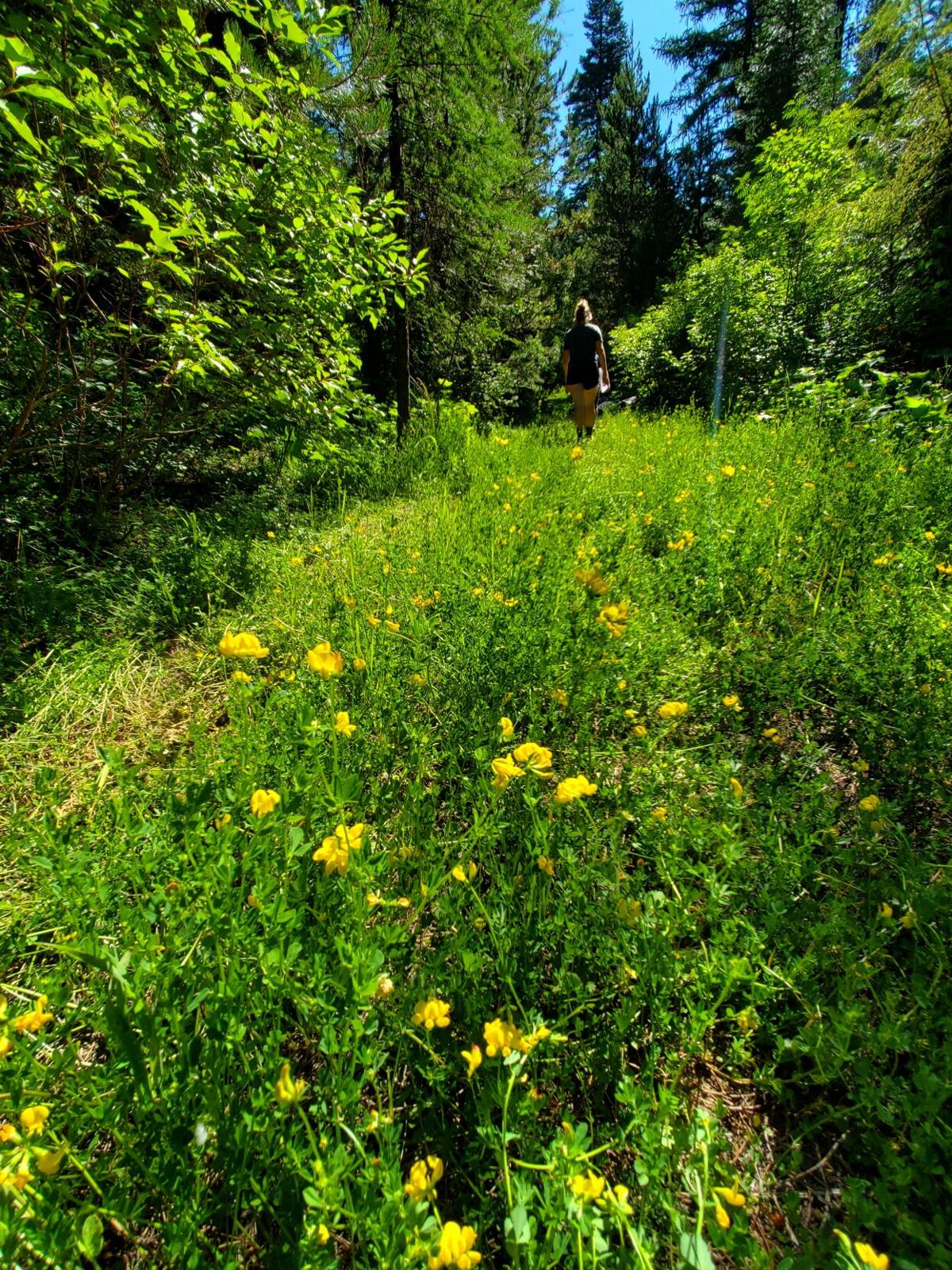 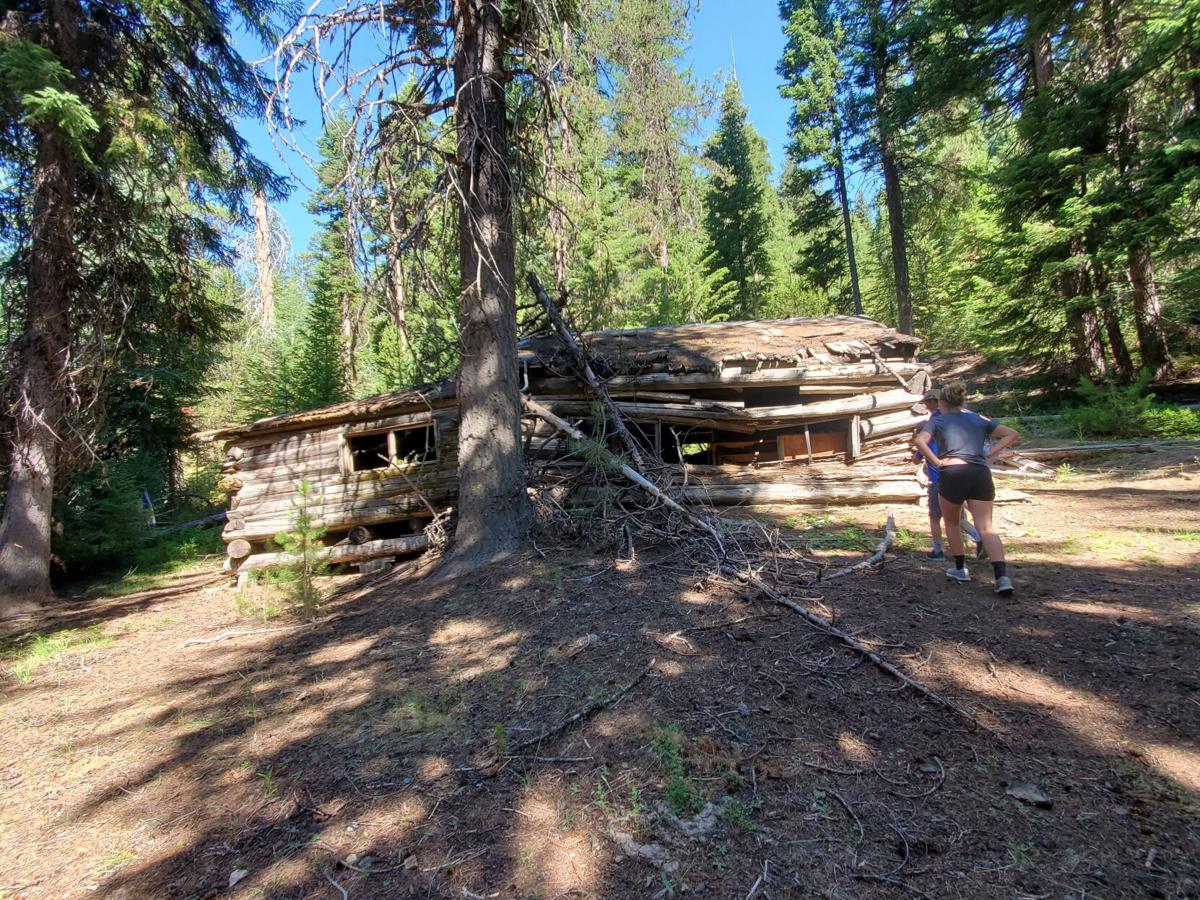 The Lemon Cabin, along the Tempest Mine trail in the Greenhorn Mountains, on July 11, 2021. 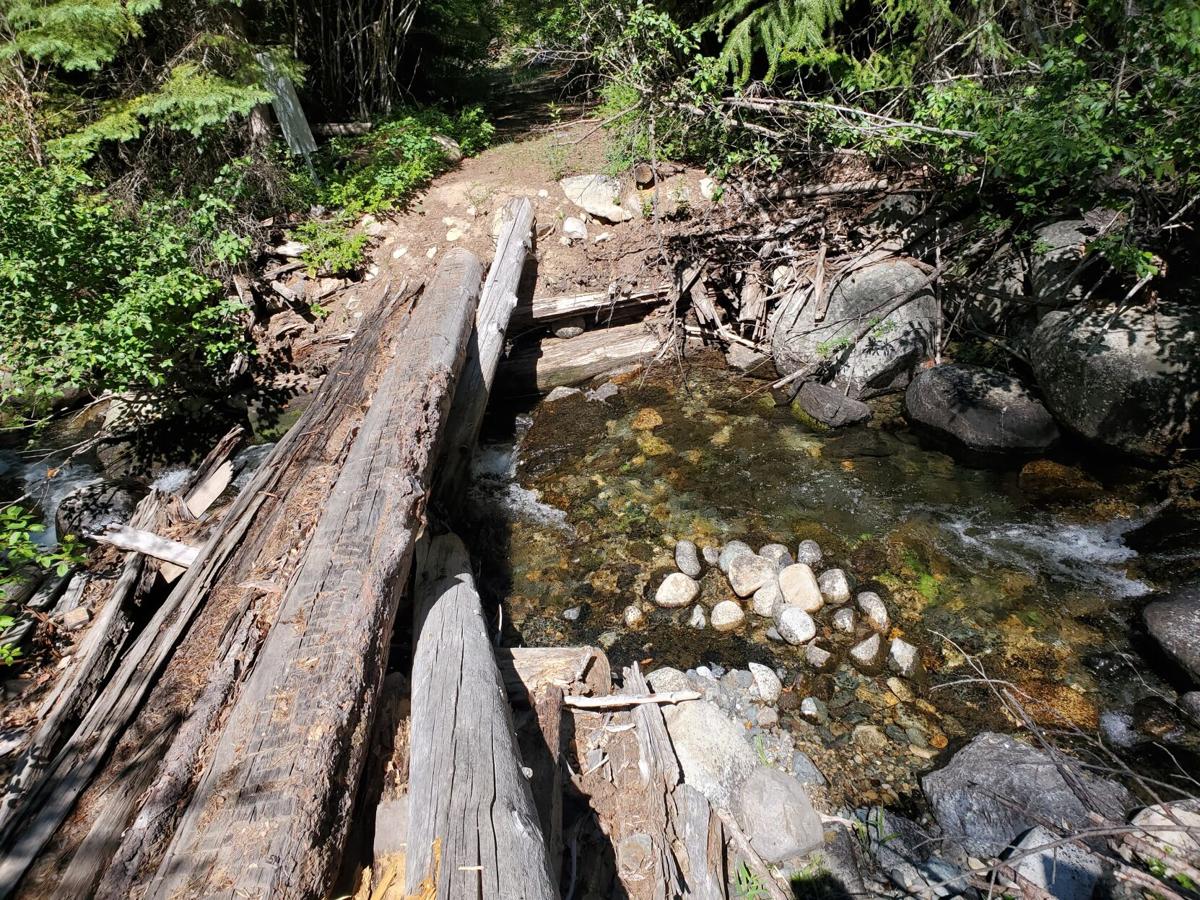 Remnants of the bridge across Granite Boulder Creek in the Greenhorn Mountains on July 11, 2021.

A freshly cut log made the hike on the Tempest Mine trail much easier on July 11, 2021.

The Lemon Cabin, along the Tempest Mine trail in the Greenhorn Mountains, on July 11, 2021.

Remnants of the bridge across Granite Boulder Creek in the Greenhorn Mountains on July 11, 2021.

The Greenhorns are the forgotten range of the Blue Mountains.

And not just because of that color naming conflict.

This is not to suggest that the Greenhorns are outright ignored.

The spine of high ground that separates the North and Middle forks of the John Day River has a typical complement of Forest Service roads and trails, and a number of spring-fed streams that glisten and tumble and froth as a proper mountain creek ought to.

There’s a staffed fire lookout atop Indian Rock and a couple of campgrounds.

The range attracts plenty of deer and elk hunters every fall.

But compared with some of the other ranges that comprise the Blue Mountains region, the Greenhorns come up a bit short.

Literally short, in one sense.

The apex of the range, Vinegar Hill, near the eastern end of the Greenhorns, tops out at a modest 8,131 feet.

That’s nearly a thousand feet lower than both Rock Creek Butte, the 9,106-foot crest of the Elkhorn Mountains, and Strawberry Mountain’s 9,042-foot summit.

In the Wallowas, Vinegar Hill’s elevation would hardly rate a mention on most maps, being shorter than more than two dozen peaks in that, the tallest range in Northeastern Oregon.

(Geographers generally treat the Wallowas as separate from the Blue Mountains, as do Lewis A. McArthur and his son, Lewis L. McArthur, in their inimitable opus, “Oregon Geographic Names.” But being neither a geographer nor an author, I feel no such constraints. Besides which, it strikes me as a blatant oversight to discuss the mountains in our corner of the state and not mention the Wallowas.)

Elevations aside, I think the Greenhorns are comparatively overlooked in large part because they lack the multiple alpine lakes that distinguish the Strawberry, Elkhorn and Wallowa ranges.

The Greenhorns aren’t lake-free, to be sure.

Olive Lake, on the north side of the range, is one of the larger lakes in the Blue Mountains.

And there are a couple of smaller pools, including Jump Off Joe Lake on the west side of the range.

But there is nothing in the Greenhorns that compares with the sheer magnificence of, to name just three, Glacier Lake in the Wallowas, Rock Creek Lake in the Elkhorns or Strawberry Lake in its namesake range.

The popularity of mountains, it seems to me, correlates pretty directly with the likelihood that it will be featured in a calendar or a coffee table book.

Yet though the Greenhorns lack the sort of signature precipitous peak or limpid lake that distinguishes other parts of the Blues, the range is, at least to my eye, not so dissimilar from its nearest neighbor, the Elkhorns.

This is especially so along the series of ridges that form the highest part of the Greenhorns.

The area around Vinegar Hill, for instance, with its slopes of fleeceflower and sage, its clumps of whitebark pines and subalpine firs, could adequately fill in for places in the Elkhorns as the backdrop for a film.

The Greenhorns have a mountain goat population, too, just like the Elkhorns, Wallowas and Strawberrys.

The Greenhorns are geologic siblings to the Elkhorns as well, a mixture of ancient sedimentary rocks and granitic outcrops. In both ranges the boundary between these strata were prime places to dig for gold, and the Greenhorns, like the Elkhorns, were scoured thoroughly by miners.

One exception to this kinship of stone is also the source of the Greenhorns’ name.

Serpentine, a rock with a distinctive green shade and smooth, almost greasy, texture, is rare in the Elkhorns but prevalent in the east part of the Greenhorns.

A prominent knob made mostly of serpentine — a feature just east of Vinegar Hill that 19th century miners christened as the Green Horn — lent its name both to the surrounding mountains and to its largest mining community, Greenhorn.

I suspect that the Greenhorns’ relative anonymity also has something to do with their location.

The range is remote in comparison to much of the rest of the Blue Mountains, with only one major highway — state route 7 — coming within a handful of miles, and no large populations in the vicinity.

The Elkhorns and Wallowas, by contrast, bracket the Interstate 84 corridor in Union and Baker counties, within sight of Baker City and La Grande.

The Strawberry Mountains are close to John Day, Canyon City and Prairie City, and visible for many miles of U.S. Highway 26.

Which is not to say that the Greenhorns are inaccessible.

Indeed, in some respects it’s easier to get around in the Greenhorns than in any of the three other ranges I’ve been using as comparisons.

Most of the Wallowa and Strawberry mountains are federal wilderness, where motor vehicles can’t go.

There is relatively little wilderness in the Elkhorns, but many of the roads in the range are in such execrable shape that for many travelers they might as well not exist.

But most of the roads I’ve driven in the Greenhorns are well-maintained gravel. And although it’s not officially a highway, the two-lane, paved Grant County Road 20, which follows the Middle Fork of the John Day for almost 40 miles between Highways 7 and 395, brings travelers to the southern foot of the Greenhorns, and connect to the dozens of roads that roam its slopes.

On the north side of the range, the gravel, but relatively smooth, Forest Service Road 10 generally parallels the county road.

The Greenhorns, in a sort of bureaucratic confluence, occupy the one place where the three national forests of the Blue Mountains come together — Wallowa-Whitman, Umatilla and Malheur.

Generally speaking, the Malheur manages the southern half of the Greenhorns, and the Umatilla everything to the north of the range’s crest. The Wallowa-Whitman oversees a much smaller area, mainly near the town of Greenhorn.

My wife, Lisa and I, accompanied by our kids, Olivia and Max, spent the weekend of July 10 and 11 camped at Deerhorn campground, on the banks of the Middle Fork about five miles downriver from Highway 7.

On Sunday morning, July 11, we hiked a route I’ve wanted to try for more than 30 years, since I first read about it in William L. Sullivan’s classic “Listening For Coyote,” the account of his 1,300-mile solo backpack trip across Oregon in 1985.

In the book, Sullivan describes ascending the Greenhorns by way of the Tempest mine. He writes about the 4,000 feet of elevation he gained — a challenge that tapped his daily allotment of 15 pieces of hard candy — but we sampled only a 2.5-mile section that doesn’t include the steep grades Sullivan climbed.

The “trail” is in fact the remnants of the road that leads to the Tempest mine, following Granite Boulder Creek most of the way.

We started hiking around 10 a.m., in deference to the infernal heat that has marked this summer. Although major wildfires denuded much of the forests on the southern slopes of the Greenhorns over the past quarter century or so, the canyon of Granite Boulder Creek is unscathed.

The mature forest of ponderosa pine, tamarack, Douglas-fir, lodgepole pine and Engelmann spruce cast shade across the road, and it was pleasantly cool.

It’s a relatively easy hike. Besides being much wider than a typical trail — four people could walk abreast in most places — it’s also well-maintained. We walked between the cut ends of several freshly sawed logs that, had they been intact, would have posed considerable obstacles.

About half a mile from the trailhead — actually it’s just a wide spot in the access road — the road crosses Lemon Creek. There’s no bridge, but we had no trouble getting across the diminutive stream with dry feet.

(Keeping our feet out of the piles of fresh cattle dung was a bit more of a challenge.)

Our main goal was Lemon Cabin, about 1.9 miles from the trailhead. It’s a typical miners shack, although rather larger than most I’ve seen, with two connected sections, one slightly lower than the other.

The logs are large, too — some better than two feet around. I can scarcely imagine the toil involved in felling them, and then hacking out the notches, all without gas-powered equipment.

Just beyond the cabin the road crosses Granite Boulder Creek on a bridge.

Or, rather, the remnants of a bridge. There are two logs, butting against each other, and one has been cut flat to make for surer footing.

We continued up the canyon, on slightly steeper grades, for about half a mile to the crossing of Blackeye Creek, another chilly stream about the same size as Lemon Creek.

From Blackeye Creek it’s another 3.5 miles or so — and more than 1,500 feet of elevation — to the Tempest mine.

We had neither the time nor the energy to go that far.

Which is not to say we were in a rush.

We were quite happy to stop occasionally to pick huckleberries. Most had yet to ripen, but in a few weeks there should be a bounty.

Which makes it possible to take a Blue Mountains hike in the Greenhorns with purple fingers.

Start by driving Highway 7 south of Baker City for 49 miles to the Middle Fork John Day Road (Grant County Road 20), turning right at a sign for Bates State Park. Drive west on Road 20 for a little more than eight miles, then turn right on Forest Service Road 4550 (there's a black mailbox on the left side of Road 20 at the intersection).

Drive Road 4550, which passes beneath cliffs of a conglomerate formation, for 1.6 miles to a junction, where Road 4550 heads left and crosses Granite Boulder Creek. Continue straight on Road 4559 for 1.9 miles. Just before the road crosses the creek, there's a pullout on the left, and a green gate with a sign noting that the route is closed to motor vehicles.