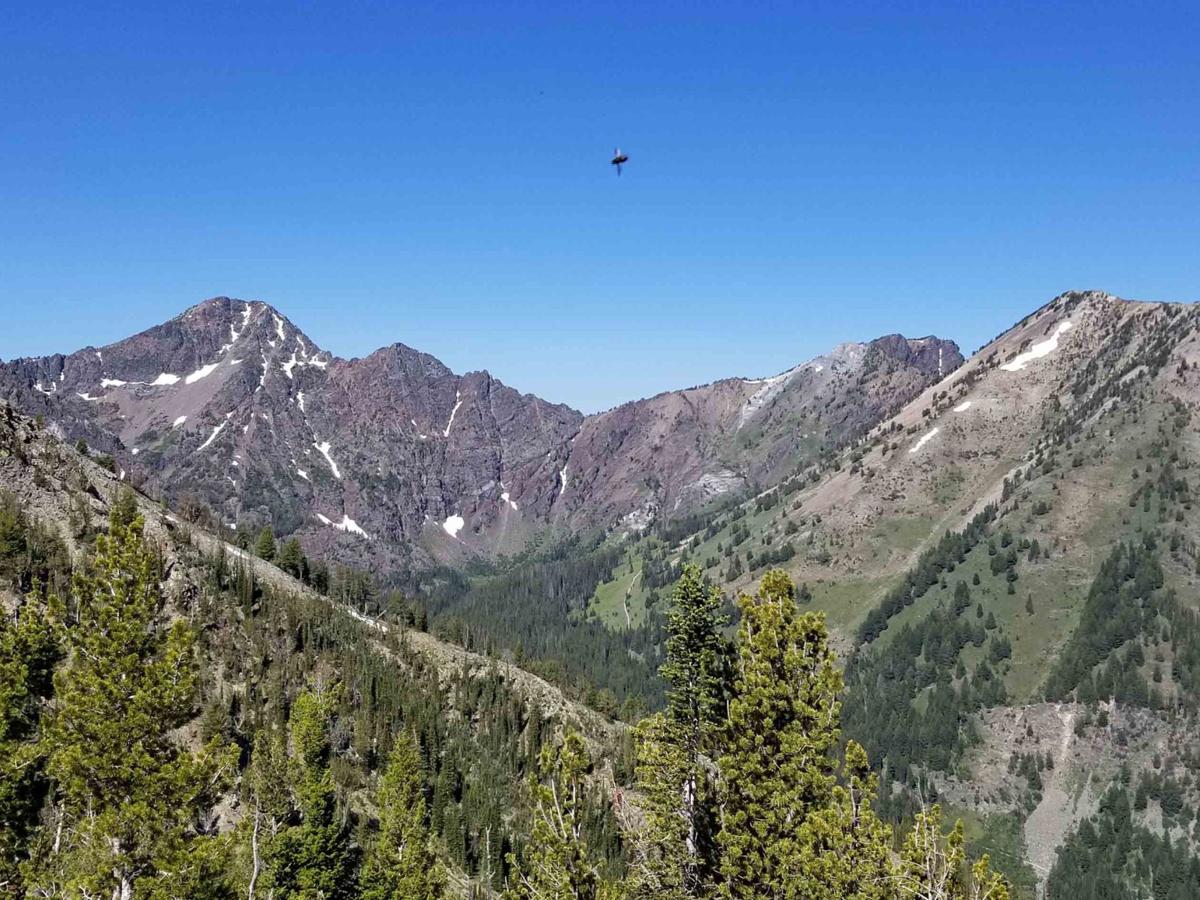 Jayson Jacoby/Baker City HeraldThe upper reaches of Pine Creek Canyon on the east side of the Elkhorn Mountains. The peak at left is Rock Creek Butte, at 9,106 feet the highest in the range. The object in the upper center is not a UFO — it’s a Clark’s nutcracker, the most common avian sight in the alpine region. 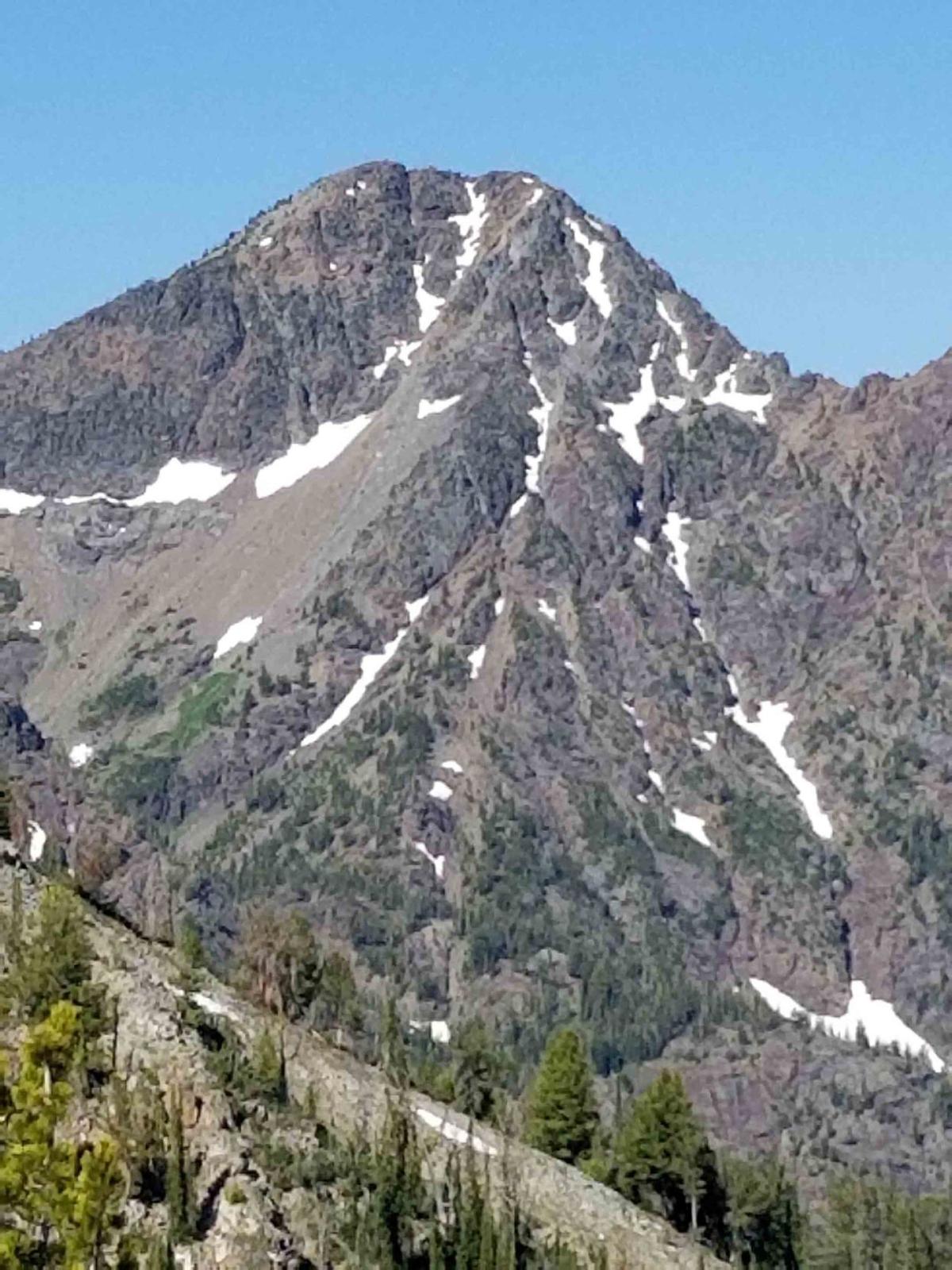 Jayson Jacoby/Baker City HeraldRock Creek Butte dominates the western skyline from a point on the ridge in the Elkhorn Mountains northwest of Baker City.

Jayson Jacoby/Baker City HeraldThe upper reaches of Pine Creek Canyon on the east side of the Elkhorn Mountains. The peak at left is Rock Creek Butte, at 9,106 feet the highest in the range. The object in the upper center is not a UFO — it’s a Clark’s nutcracker, the most common avian sight in the alpine region.

Jayson Jacoby/Baker City HeraldRock Creek Butte dominates the western skyline from a point on the ridge in the Elkhorn Mountains northwest of Baker City.

It was the hottest day of the year and my throat felt the way I imagine it would feel if I had recently swallowed a sheet of sandpaper.

I had not done so, fortunately.

Nor have I ever consumed so much as a scrap of sandpaper, so far as I can remember.

(Although one time I gave myself a nasty scrape across two knuckles when I was trying to smooth a piece of wood with some 120-grit and my hand slipped.)

Sandpaper, being both gritty and dry, is of course the commonest metaphorical object to describe a person who is particularly parched.

At the moment I was pondering the effects of sandpaper lodged in my esophagus there were two stainless steel bottles, with a combined liquid capacity of 45 ounces, nestled in pouches, one on either side of my backpack.

Their combined current volume was approximately 3 molecules of tepid water that would dissipate into their constituent elements long before they ever reached my mouth.

Every time I took an awkward step the pack jostled and the bottles echoed in a dull and depressing way, as though to remind me that they were about as useful in slaking my thirst as, well, sandpaper.

And I was taking an awful lot of awkward steps.

Indeed I wasn’t so much walking as I was careening down a slope that’s about as steeply pitched as a ski jump — and in places one nearly as slippery, though considerably less smooth.

This was all Phil Reindl’s fault.

Well, perhaps not quite all.

I can’t for instance blame Phil for the steepness of the slope. So far as I know he isn’t responsible for the hundreds of millions of years of plate tectonics, thrust faults, glacial advances and assorted other geological phenomena that conceived the Elkhorn Mountains near Baker City, which is where we were hiking.

Also, Phil did suggest, several days before our excursion, that I bring ample food and water because it would be a bit of a jaunt.

I suppose it would be churlish of me to contend that he ought to have emphasized, in dispensing advice, that a quart and a half might not be quite enough water for a trek that takes place on July 21 and that involves 4,000 vertical feet of climbing.

(And, given that neither of us owns a helicopter or possesses the ability to levitate, an equivalent distance of descent.)

Still and all, the whole thing was Phil’s idea.

Even though the hike was the sort of ordeal I can easily get myself into simply by looking at a map.

I met Phil last October when I interviewed him and his son, Andy, and wrote a story about their one-day hike of the 24-mile Elkhorn Crest National Recreation Trail.

During our conversation it came out that I like to hike as well.

I suspect this is when the plotting began.

Earlier this summer Phil emailed me with his pitch. He had been pondering a hike up a ridge that leads from Baker Valley to near Elkhorn Peak, at 8,932 feet the second-tallest summit in the range, and he asked if I was interested in going with him.

There is no trail on this ridge.

At least no trail that wasn’t blazed primarily by elk, which is quite a different prospect than a path dug by people and intended for bipedal travelers.

Elk make trails, to be sure, but not because they need trails.

Elk, as anyone who has ever hunted them knows, can, and most generally will, go wherever they please, and at speeds no human can approach.

The trails they pioneer reflect their insouciance toward terrain. Elk aren’t completely masochistic, to be sure — they will frequently bypass cliffs or thickets or other obstacles. But their routes lack the palpable timidity that characterizes manmade trails, with our emphasis on forging the least taxing way through, as if to compensate for our comparative lack of strength and agility.

Phil, who is 68 but seems unperturbed by the sort of physical toil that terrifies people half his age, had, I was pleased to find out, reconnoitered the route a few days before our hike.

Although it’s impossible to minimize a 4,000-foot climb on foot — gravity being the obstinate force that it is — Phil has a knack for navigation.

This is one among innumerable knacks which I utterly lack.

My off-trail trips — which I describe, to anybody unlucky enough to accompany me, as a “shortcut” — invariably involve me blundering through the underbrush and conclude with me bursting into the clear, after a considerable time, looking bewildered and as though several cats with exceedingly sharp claws had been slashing indiscriminately at my lower legs.

Phil, however, is much cleverer than I am.

I could not reasonably describe his route up the Elkhorns as easy — I must again emphasize the matter of those 4,000 vertical feet — but it became obvious, while we were still on the lower ramparts of the ridge, that he had plotted a course which greatly reduced my exposure to skin-shredding foliage and rocks.

Phil’s savvy route-finding, in addition to preserving my household bandage supply, gave me a newfound appreciation for the unique nature of cross-country travel.

Now it happens that I greatly admire trails, and the people who design and build them. There is an elegance to a well-conceived switchback or traverse that pleases my eye (and my legs and lungs, by easing the burden on both).

But trails can also have something like the numbing effect on the traveler that a freeway does, albeit to a much lesser degree. When you’re hiking on a well-maintained trail you tend to saunter along in a sort of auto-pilot mode. I do, except when I’m tripping and falling on an exposed spruce root.

The benefit, of course, is that this allows you to focus on the scenery, comfortable in your trust that the designated path won’t lead you astray.

But as I followed Phil on what seemed an endless series of ascents, ranging from routinely steep to lung-searingly ludicrous, I realized that the intensity of concentration required when there is no formal path forced me to see anew the landscape.

I noticed the eclectic textures and colors of rocks, and the way snowbrush leaves gleam in the sunshine as though each had been dipped in shellac.

I saw desiccated mushrooms the deer had missed, and drifts of fir needles churned by a brief flow of water, and pinecones plundered for their seeds by squirrels.

Each of these objects, I’m pretty sure, I would have hiked right past without noticing had I been on a trail.

I was also reminded that hiking is supposed to be a recreational activity, not work, and that a hiker ought to stop regularly to take in a wider perspective than what’s beneath his boots.

As neither Phil nor I has the respiratory system of a Sherpa or a Tour de France cyclist, we had to pause often, particularly during the climb, to allow our heart rates to settle into a beat rather less frenetic than a Keith Moon solo.

A developed trail, by contrast, beckons a hiker ever onward, a sort of magnetic pull that is beguiling. A trail, with its defined curves and signs and other milestones, provokes the human instinct to accumulate discrete goals, and as rapidly as possible, as though they were valuable tokens.

As much as I enjoyed my hike with Phil, I’m quite sure that most of the miles I walk in the woods in the future, as in the past, will be on trails or roads. My family’s annual backpacking trip to the Eagle Cap Wilderness is next weekend, and when we sat around a table to discuss the route, and the dayhikes we’d like to take from our base camp, we talked about trail numbers rather than, say, compass headings.

Time, however much I’d like to believe otherwise, still dictates much of life. And when my time is limited in a place as magical as the Eagle Cap, I’m not a bit troubled to confine my travels to trails because that means I’ll see more, in the broadest sense.

But thanks to Phil’s kind invitation, I also know that my perspective, as I trudge along the Wallowas’ dusty trails, will be different.

Even as I appreciate that trails remove the burden of having to focus on where I’m going, leaving me to savor my surroundings more casually, I expect that now and again, when I walk past a gap in the trees, I’ll wonder what I might find if I venture into the relative unknown that lies beyond a patch of pines.