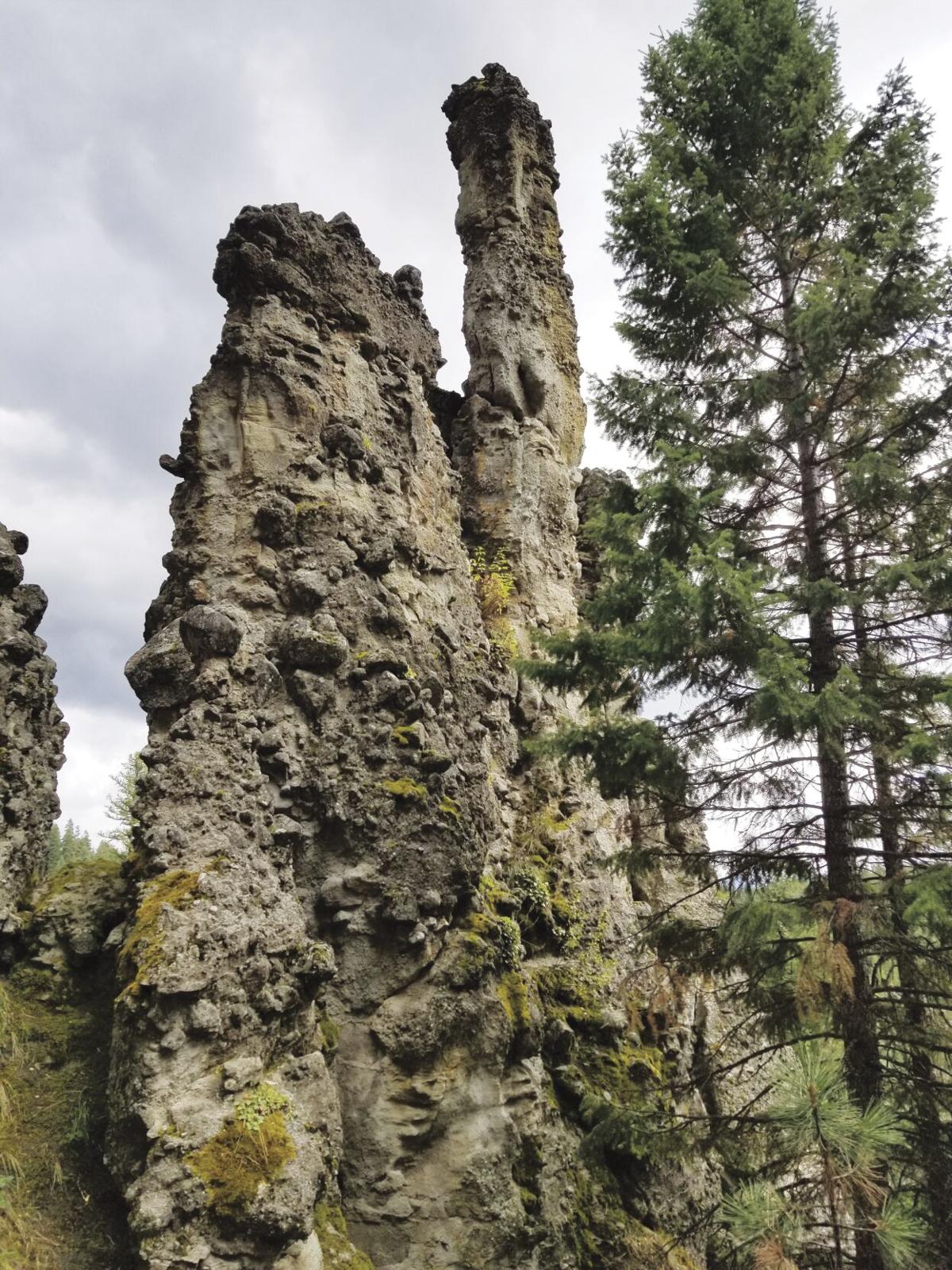 The Woodley Rocks, along the upper Grande Ronde River, were formed by the erosion of soft material from a volcanic eruption about 30 million years ago. 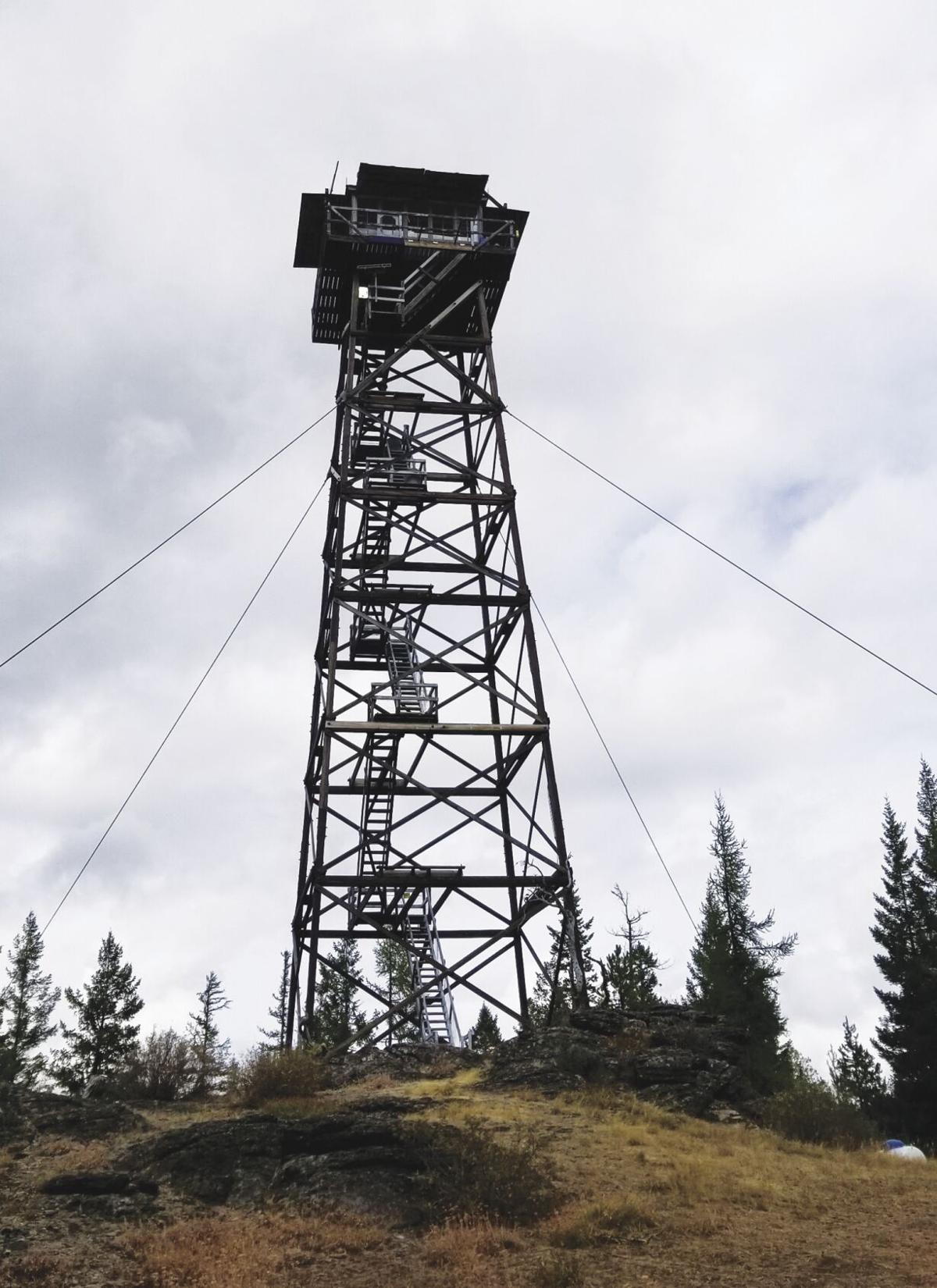 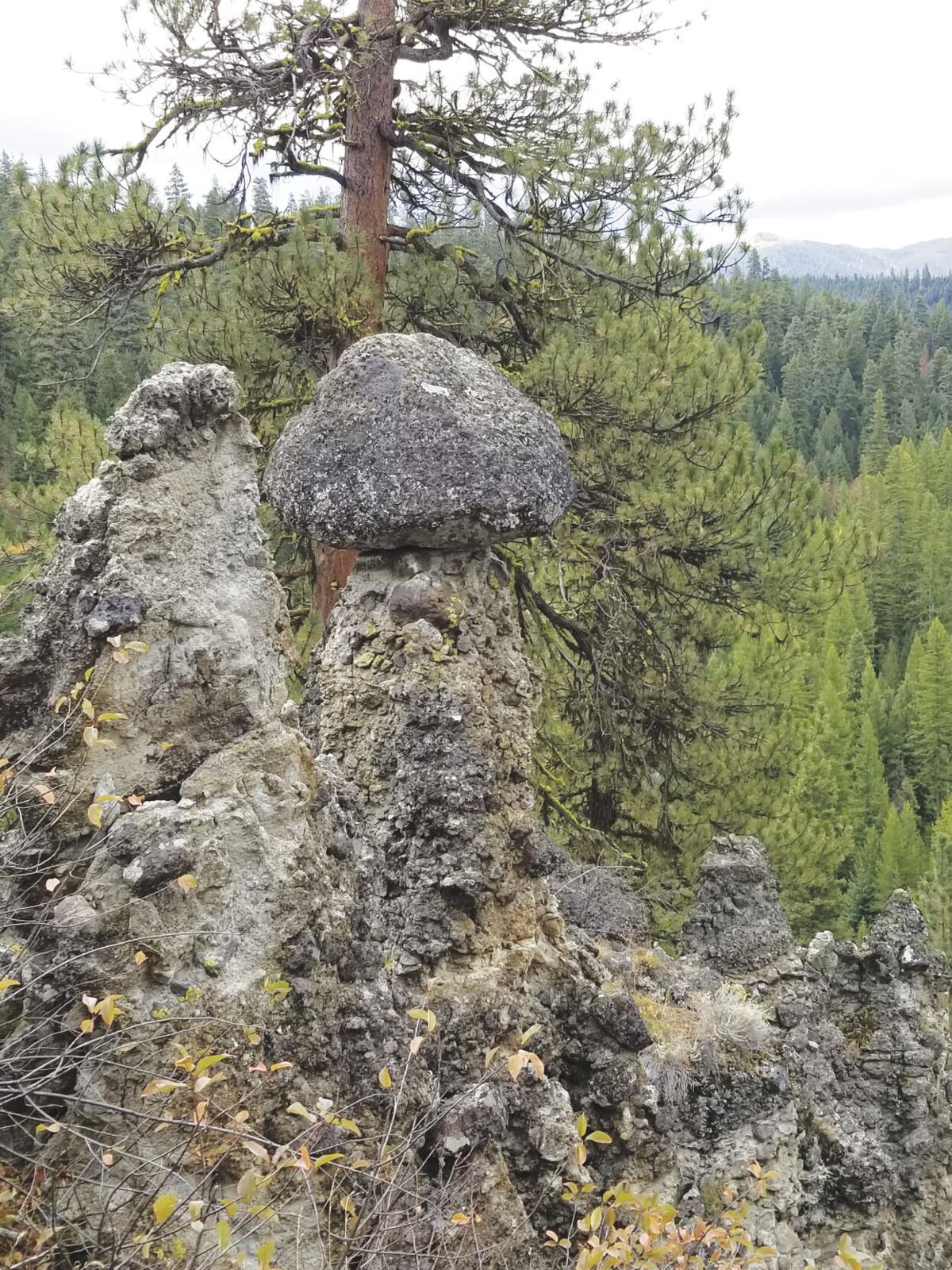 A pinnacle at Woodley Rocks capped by a chunk of erosion-resistant dacite, a type of volcanic rock. 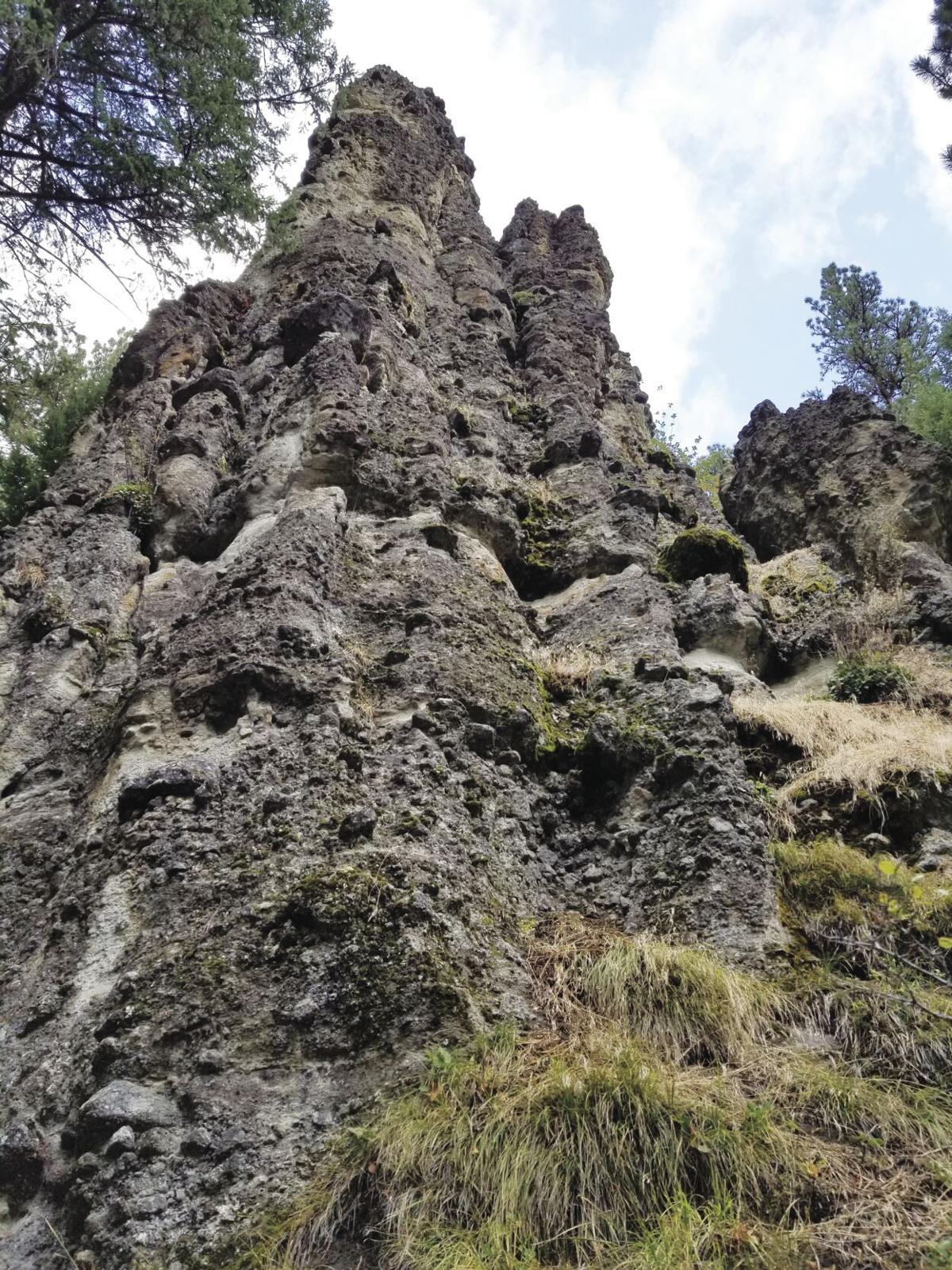 A pinnacle at Woodley Rocks along the upper Grande Ronde River.

The Woodley Rocks, along the upper Grande Ronde River, were formed by the erosion of soft material from a volcanic eruption about 30 million years ago.

A pinnacle at Woodley Rocks along the upper Grande Ronde River.

If the Woodley Rocks were in a national park, a paved trail would wind among the peculiar pinnacles and you’d hardly be able to get a photograph that didn’t include a couple of giggling kids with ice cream dribbling down their chins.

But this curious volcanic formation is not in a national park.

It’s in the Wallowa-Whitman National Forest about 40 miles southwest of La Grande.

There is no paved trail.

Not much of any trail, come to that, save for a few narrow paths that probably owe their existence as much to elk as to people.

Fortunately the pinnacles, also known as “hoodoos,” happen to stand within a stone’s throw of a well-graded gravel road. The slope on the north side of the upper Grande Ronde River is quite steep, but you needn’t hike more than 10 minutes or so to get a gratifying view.

I hadn’t even heard of the Woodley Rocks until a few days before I saw them.

My wife, Lisa, and I were planning a camping trip for the first weekend of autumn.

I suggested somewhere along Forest Road 51, the paved two-lane route that branches off Highway 244 near Starkey and follows the Grande Ronde upstream.

Lisa was perusing the Wallowa-Whitman’s website when she came across a page for Woodley Rocks.

There was but a single small photograph of a pinnacle, but it piqued my curiosity. I hadn’t seen any similar formations around here except a site near Unity Reservoir southwest of Baker City.

We decided to try to find a space for our tent trailer at the Wallowa-Whitman’s Spool Cart campground, along the 51 Road not far from Woodley Rocks.

I was a trifle worried that the 12-space campground would be full — it was the last weekend of archery hunting season, and we didn’t leave Baker City until Saturday morning. But only a few of the spots were occupied when we arrived. The brilliant orange wild rose hips still glistened with water from the previous night’s rain, the first significant storm of the season, and the temperature was a decidedly autumnal 49.

Our first destination was not Woodley Rocks.

But it was a rock.

Johnson Rock is the site of a Forest Service fire lookout I hadn’t visited but have long been intrigued by, having seen it, always in the distance, from various vantage points in the Anthony Lakes area.

The route to Johnson Rock starts about 3 miles south of Spool Cart. Turn right on Road 5115, which crosses the Grande Ronde River, follow it for a mile and a half or so and then turn left onto Road 5120.

We drove most of the way to the lookout — the road deteriorates and isn’t suitable for regular passenger cars but poses no challenge for four-wheel drives — but walked the last couple of miles.

The lookout, which sits atop an 82-foot wooden tower built in 1952, is closed to the public this year due to the coronavirus pandemic.

But the amiable firewatcher, Jeffrey A. Schwilk, hollered down an invitation to climb the tower to just below the lofty perch where he lives, sleeps and works.

Our son, Max, who’s 9, was satisfied with making it up 20-some steps to the first level.

My knees started trembling about halfway up, but Lisa, who normally has no particular affinity for heights, kept climbing. When she got to the final landing, Schwilk not only answered her questions about what it’s like to sleep 82 feet above the ground in a tower that sometimes sways in the wind, but he also handed down a calendar graced by his own beautiful photographs of birds, some of which he took from the lookout.

As is the case with most fire lookout sites, the view from Johnson Rock is expansive even without the artificial aid of a manmade tower. We were especially intrigued by a new perspective of the Elkhorns, dusted with the season’s first snow.

After lunch we drove up Road 5125, which branches off the 51 Road about 13 miles south of Highway 244. Road 5125 runs east, following the upper Grande Ronde River for several miles and connecting to the Ladd Canyon Road, No. 43.

About 4.1 miles from the 51 Road junction, look to the left (north) side of the road. When you see the pinnacles, find a pullout (there are a few nearby) and park.

The forest here, which includes scattered old-growth ponderosa pines around 100 feet tall, largely obscures the Woodley Rocks except from the vantage point of the road. Given the absence of marked trails — the Wallowa-Whitman’s website describes this with the curious term “self-discovery adventure” — we found it easier to walk below the pinnacles and then scramble up the slope, made slippery in places by a thick layer of ponderosa needles, to see the formations from above.

It is a strange place.

Rock outcrops are to be expected in the mountains, of course — mountains, generally speaking, being made of rocks.

But the spires of the Woodley Rocks are quite different from the usual formations, more reminiscent of Utah’s Bryce Canyon than of the Blue Mountains.

You needn’t be a geologist to grasp the basic forces that created the pinnacles. They are composed of a mixture of fist-size stones held together by what resembles poorly mixed mortar. In places you can pluck chunks of this stuff loose with your fingers.

But several of the pinnacles are capped by boulders that are obviously made of sterner stuff. It’s clear that erosion has stripped away the more fragile material, leaving vertical strips protected by the harder stone.

Being curious by nature, though, I sought a more, well, educated explanation for this place that I found fascinating — the more so because I had somehow managed to remain ignorant of it for a few decades despite knocking around the general vicinity pretty often.

I called up the website for the Oregon Department of Geology and Mineral Industries. This yielded documents that, though rendered in what appeared to be English, meant little more to me than an essay in Sanskrit. Phrases such as “clast-supported dacite-porphyry clast” and “crystal-lithic, hornblende-bearing tuffaceous breccia” leave me confused and, like as not, with an incipient headache.

Fortunately the documents also frequently included a last name that, unlike the geologic jargon, was quite familiar to me: Ferns.

He’s a retired geologist for the state agency who many times has guided me, a scientific neophyte, through the immense span of geologic time with a patience for my confusion and bungled pronunciations that can only be described as saintly.

Mark, who lives in Baker City, retired in 2011 after a 30-year career with the geology agency. He is among the geologists who deduced much of the history of the area that includes Woodley Rocks.

Mark told me the pinnacles are the result of a volcanic eruption around 30 million years ago (and possibly several million years earlier). This eruption was part of a series of events that would, millions of years later, culminate in the creation of what geologists call the Tower Mountain caldera. A caldera is a large depression created when a volcano’s magma chamber empties. The most famous example in Oregon is Crater Lake, which formed in the caldera that Mount Mazama created during a cataclysmic eruption about 7,700 years ago.

Mark said the Tower Mountain eruption left a deposit that included a jumbled mixture of ash, silt, sand, mud and rock. The ash and other softer stuff would of course be much more prone to erosion from water and wind than the harder, denser rocks that were to this geologic recipe what chunks of meat and potatoes are to a hearty stew.

These rocks, some of them capstones perched precariously at the tip of a pinnacle, are dacite, Mark told me. That’s a type of volcanic rock that has a higher concentration of silica than basalt or andesite, but a bit lower than rhyolite (which, in certain circumstances, forms glassy black obsidian.)

Smaller pieces of dacite mixed with the softer stuff have acted rather like bricks in a chimney, holding the mortar between them together, while the surrounding material, lacking solid stone, long ago washed away.