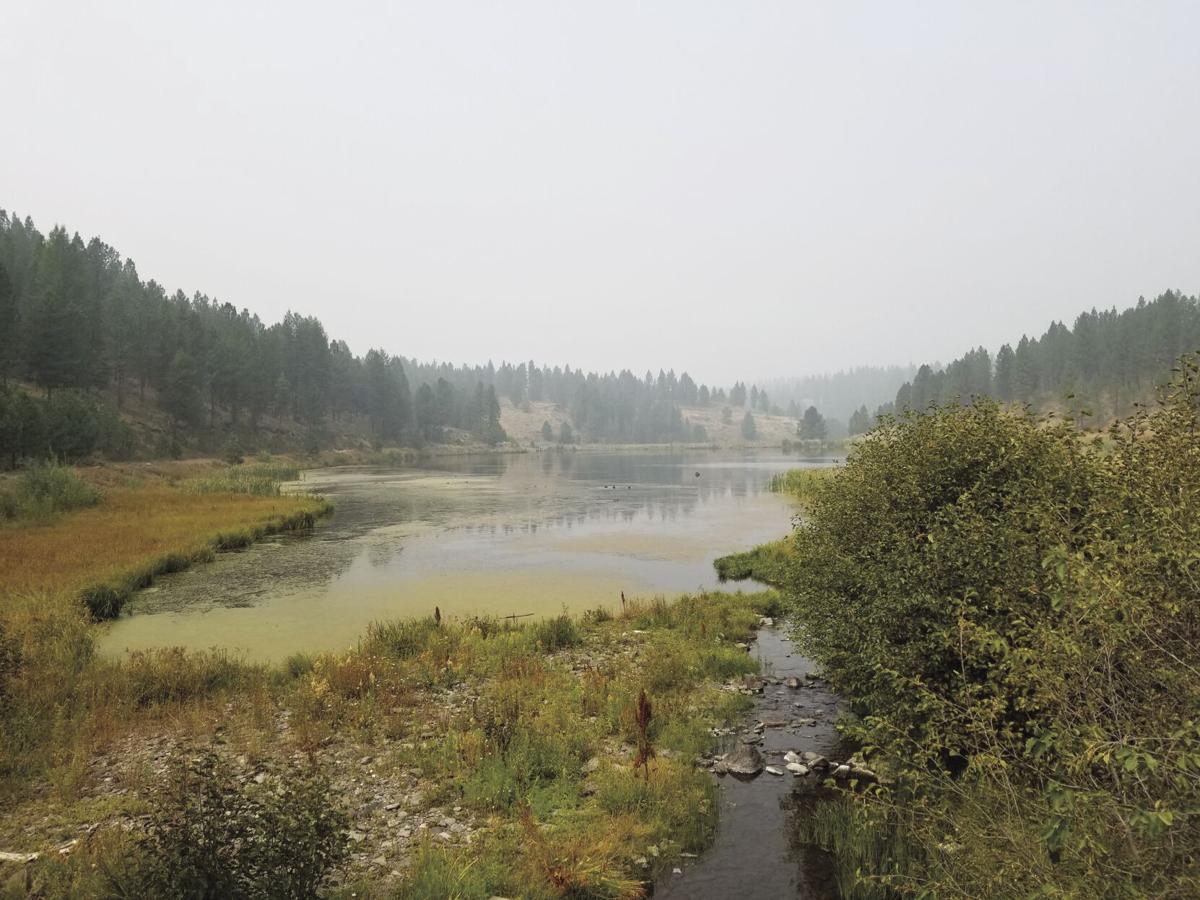 The former log pond at Bates State Park, in Grant County southwest of Baker City, is a haven for waterfowl. 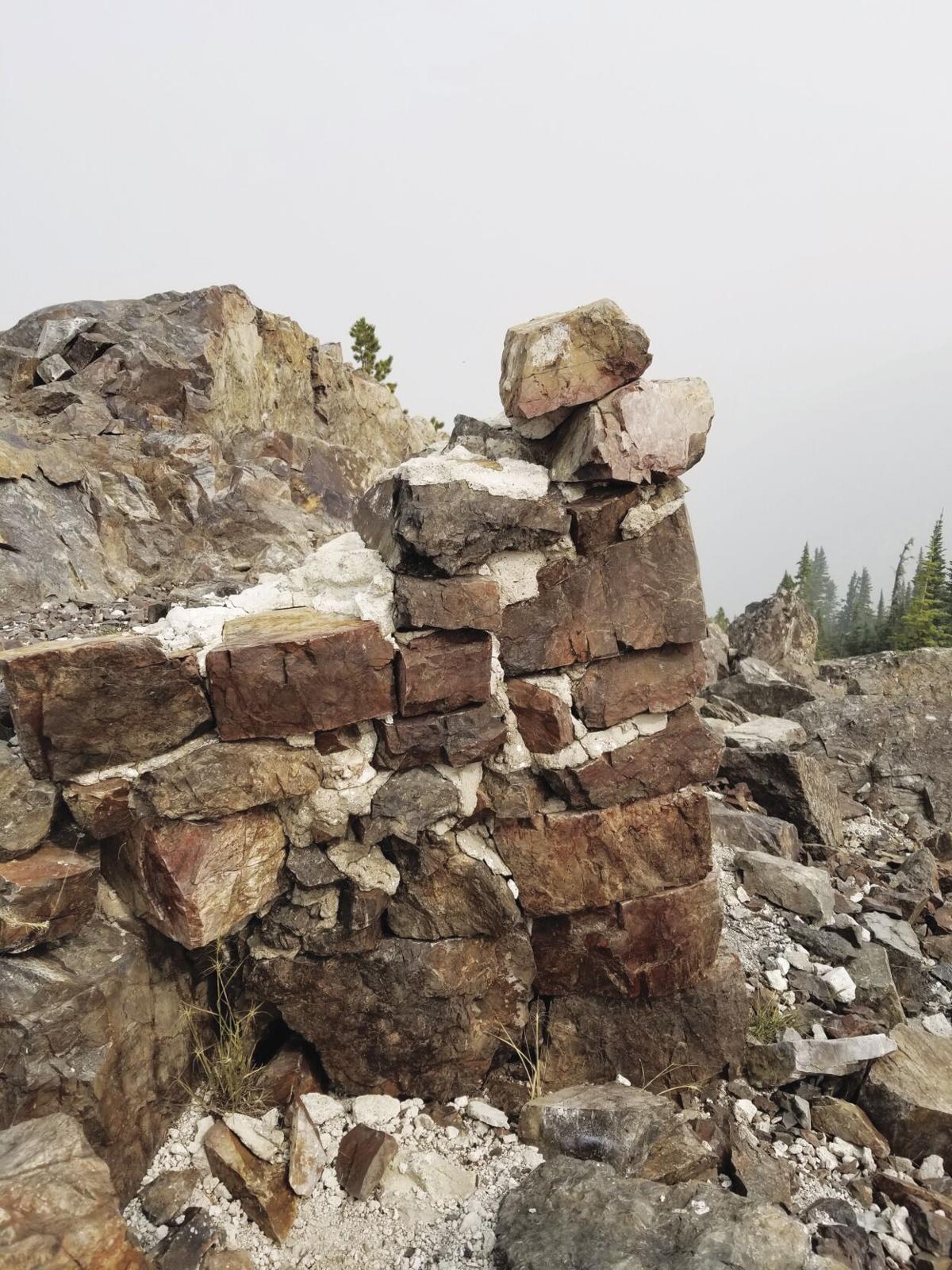 Part of the foundation for the former fire lookout that stood atop Vinegar Hill in the Greenhorn Mountains. 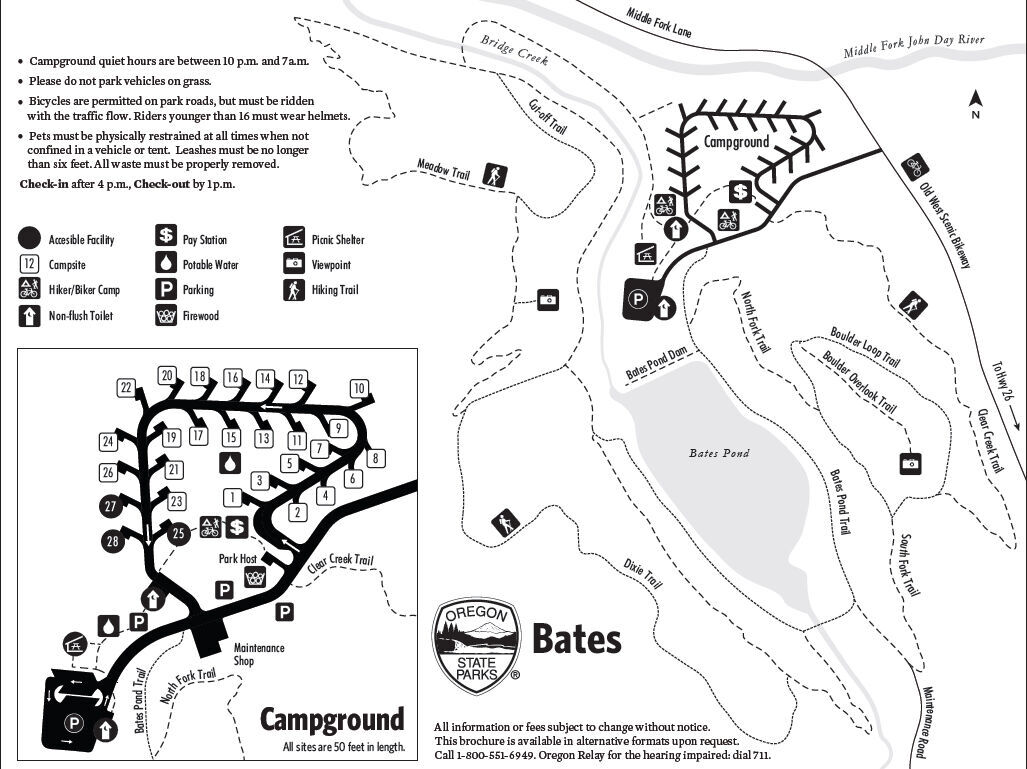 The former log pond at Bates State Park, in Grant County southwest of Baker City, is a haven for waterfowl.

At Bates State Park they don’t roll out the red carpet for you, but they do roll it up.

Which is much nicer.

The carpet in this case is closer to tan than to red, actually.

And unlike the ceremonial path of woven cloth spread to cushion the presumably sensitive feet of visiting dignitaries, the carpet at Bates, one of Oregon’s younger state parks, is composed of desiccated ponderosa pine needles.

I already felt badly about forgetting how extensive the trail network is at Bates, which opened in 2011 on the site of a former sawmill company town along the Middle Fork of the John Day River about 50 miles southwest of Baker City.

Then I reached the place on the South Fork Trail where somebody had neatly and thoroughly raked the ponderosa needles off the path.

Not only does this 131-acre park in Grant County boast a fine series of trails, but the staff is thoughtful enough to do away with the layer of slippery needles, potentially sparing me from a nasty fall.

And although I can forgive myself for being unaware of this level of diligence in trail maintenance, I ought to have at least remembered that the trails existed.

I wrote a few news stories back in 2011 when Bates State Park opened. And after my recent, and first, tour of the park I went back and read, shame-faced, my own words, which include a reference to the park’s more than 3 miles of trails.

I surmised that one purpose for raking the pine needles is to turn the trail into a firebreak, but Dickens said the main reason is to make the trails obvious and easy to follow.

The pleasant surprise about the trails, and their immaculate condition, wasn’t the only one we had during our hike of an hour or so.

We also encountered a large frog in Bridge Creek, just below the concrete fish ladder that connects the stream to the former log pond for the erstwhile Bates lumber mill (see story, “What’s Fishy?,” below).

My son, Max, who’s 9, was particularly excited by the frog. His 13-year-old sister, Olivia, showed modest interest. My wife Lisa and I just watched, anticipating a splash and soaked shoes.

(Neither of which happened; Bridge Creek is little more than a brook at the end of summer.)

We also saw, from a much longer and safer distance, a hornet nest, about the size of a soccer ball, hanging from a fence like an infected boil dangling from an arm.

Neither the amphibian nor the venomous insects caused us any trouble.

The wildfire smoke that was draped over the park on the day of our visit, Sept. 13, was something of a nuisance, however.

We hiked to the enticingly named Boulder Overlook, but mainly what we overlooked when we got there was a dingy gray pall.

On a day with a less muddied atmosphere the view from this knoll among the pines would be quite fetching, I’m sure, including Dixie Butte to the southwest and parts of the Greenhorn Mountains that rise to the north.

The smoke wasn’t so thick, at least, to obscure the pond that is one of the park’s highlights.

When the Bates mill was operating from 1917 until its closure in 1975, workers dumped fresh-cut logs into the pond to await their appointment with the singing saws.

Storing logs in ponds, rather than stacking them on the ground, was the preferred method for multiple reasons.

The water helped clean logs of dirt and rocks that could dull saws, as well as protecting the logs from fire and from drying out.

And of course it’s considerably easier to move an old-growth ponderosa pine when it’s floating.

Today the pond, which covers a few acres, is a refuge for ducks, blue herons and other birds rather than huge pines. A gravel trail encircles the pond.

Bates was a company town, meaning the firm that owned the mill also owned pretty much everything else, including the rows of identical homes where millworkers lived and the stores where they shopped.

The company in Bates’ case was the Oregon Lumber Company, which built the mill in 1917 — the year America entered World War I.

The town’s namesake was Paul C. Bates, an insurance salesman from Portland who helped negotiate the Oregon Lumber Company’s acquisition of forests in the area, according to Lewis A. and Lewis L. McArthur’s “Oregon Geographic Names.”

(A book which I consider a necessary item in the library of anyone who has more than a passing interest in Oregon.)

Bates was a prominent town in Grant County for more than half a century, with a population of about 300.

The town essentially folded, though, in October 1975 when the Edward Hines Lumber Company, which had bought the mill from the Oregon Lumber Company, closed the business.

The Hines firm moved the sawmill to John Day and sold most of the other buildings, including several dozen homes. Many were hauled to either Prairie City, about 16 miles away, or to John Day, 29 miles distant, where they’re still used as residences.

A private nonprofit group, Bates Park and Museum Foundation, bought the 131-acre property in December 2006 and later transferred it to Grant County.

In 2008, at the urging of a newly formed nonprofit, Friends of Bates State Park, many of whose members are former Bates residents, the Oregon Parks and Recreation Department, using money from the Oregon Lottery, bought the 131 acres from the county for $407,000.

The property includes the site of the sawmill but not the town itself.

The state later spent about $900,000 to develop the park, including a $275,000 grant from the federal Land and Water Conservation Fund.

Bates State Park makes an excellent base camp for exploring the Middle Fork of the John Day and the Greenhorn Mountains, one of the major subranges of the Blue Mountains.

The Malheur National Forest also manages a pair of primitive campgrounds (no water or RV hookups) along the Middle Fork several miles downriver from the state park — Deerhorn and Middle Fork campgrounds.

Austin House, at the junction of Highways 7 and 26, has a restaurant with outdoor dining and a gift shop with an excellent selection of Bigfoot merchandise, should your interests include hirsute beasts which purportedly roam the wilds of Oregon.

A two-lane paved highway — Grant County Road 20 — follows the Middle Fork of the John Day for 38 miles between Highway 7 and Highway 395.

More than a dozen Forest Service gravel roads branch off County Road 20. The highest summit in the Greenhorns — Vinegar Hill, elevation 8,131 feet — is about 13 miles north of Road 20. The route is by Forest Road 2010, which starts about 2 miles west of Bates State Park, and just beyond Vincent Creek, which is marked by a sign. Road 2010 is well-maintained gravel for about 7 miles but a rough, rutted and rock-strewn four-wheel drive road thereafter. Vinegar Hill is the former site of a fire lookout, but only a few scraps of wood and rusted metal, and a corner of the foundation, remain from the lookout, which was demolished in 1971.

Forest Road 36 runs south from the Middle Fork and leads to the trailhead for Arch Rock. The Road 36 junction is about 18 miles from Bates State Park. Follow Road 36 for about 5.2 miles, then turn left at a sign for Arch Rock.

The longest undammed river in Oregon, the John Day is also a significant refuge for salmon and steelhead.

Most of these anadromous fish (ones that spent part of their lives in the ocean) spawn in either the mainstem John Day or in its North, Middle or South forks, said Steph Charette, district fish biologist at the Oregon Department of Fish and Wildlife’s John Day office.

But smaller numbers of fish also try to return to tributaries such as Bridge Creek, which flows through Bates State Park.

Steelhead are more plentiful, and they typically arrive from April through June, Charette said.

Chinook salmon are more rare in Bridge Creek, with only about three fish confirmed to have climbed the fish ladder, continued through the former Bates log pond and further upstream, said Brent Smith, assistant district fish biologist at the John Day office.

Charette said the fish ladder, which was built in 2001, doesn’t meet the state’s standards for fish passage. He said the water flow can be too high during spring, making it difficult for steelhead to navigate.

Charette said the Oregon Parks and Recreation Department plans to replace the fish ladder with a new stream channel that will make it easier for fish to continue upstream above the pond.

Bates State Park is less than a mile from State Highway 7 near Austin Junction, where the highway meets U.S. Highway 26. The park is about 50 miles southwest of Baker City.

From Baker City, drive Highway 7, the Sumpter Highway, for about 49 miles. Between Mileposts 2 and 1 (the numbers get smaller the farther you get from Baker City), turn right onto Middle Fork Lane. There is a sign for the state park.

Bates State Park, which covers 131 acres, has a 28-site campground that’s usually open from May 1 through Oct. 31. The campsites can accommodate tents or RVs, but there are no electric or sewer connections. There is potable water in the campground, as well as vault toilets, picnic tables and fire rings.

Bates State Park also has a day-use area that includes a picnic shelter that can be reserved. For more information go to https://stateparks.oregon.gov/ or call the park at 541-448-2585.