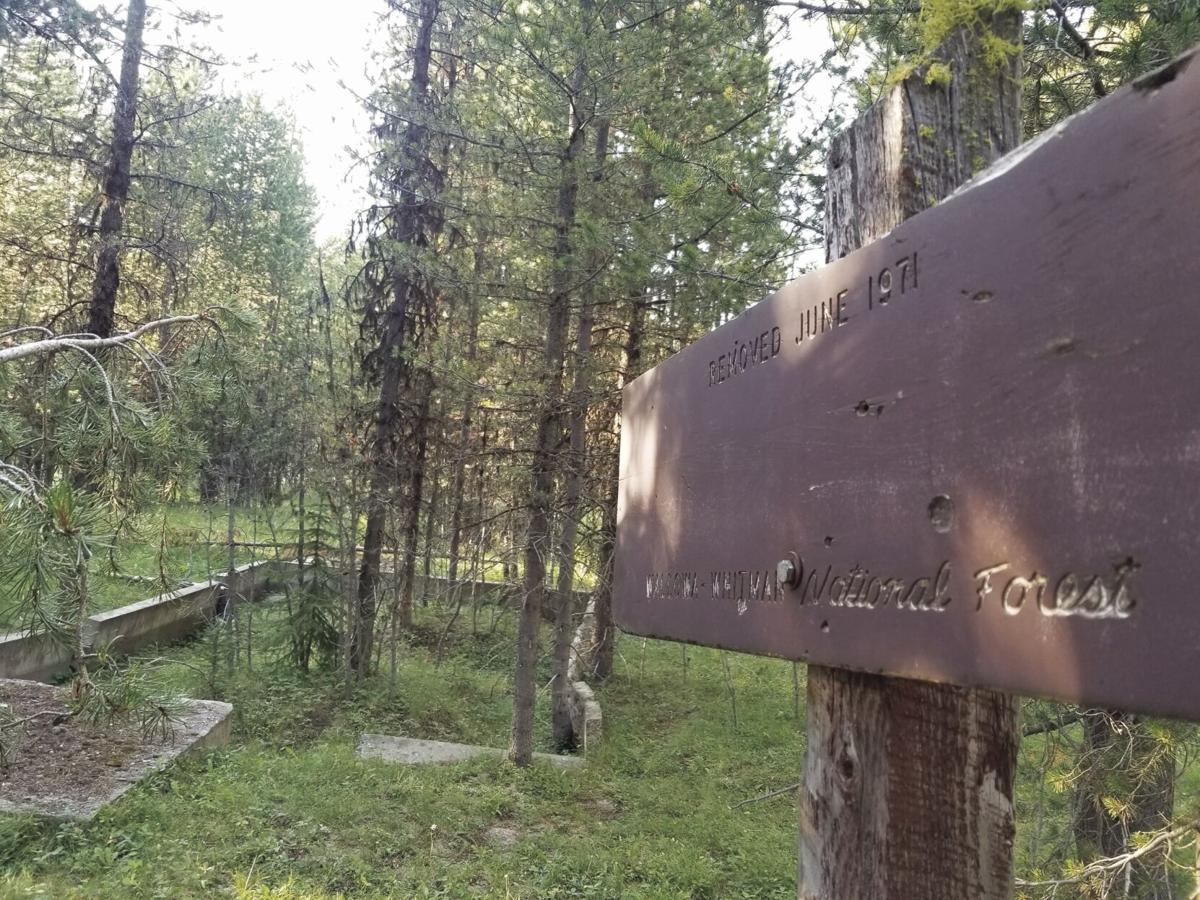 This sign, and a concrete foundation, are the only remnants of the Porcupine Guard Station. 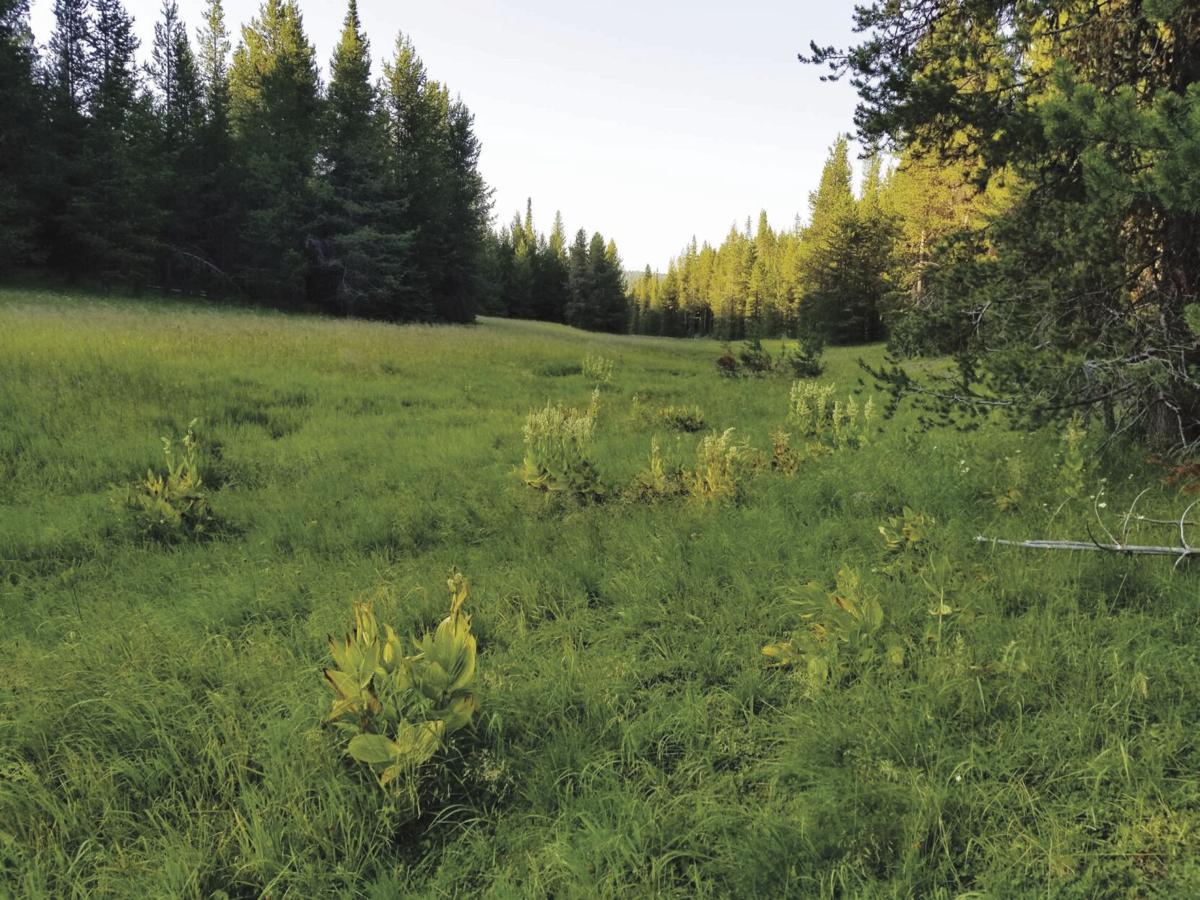 The meadow along Beatty Creek, in the La Grande Watershed. This is where Ken Emerson’s travel trailer got stuck on a stormy evening in July 1970.

This sign, and a concrete foundation, are the only remnants of the Porcupine Guard Station.

The meadow along Beatty Creek, in the La Grande Watershed. This is where Ken Emerson’s travel trailer got stuck on a stormy evening in July 1970.

Ken Emerson’s family might have been the last people to spend the night in the Porcupine Guard Station, and it all happened because he was a bit too confident in his Ford Bronco’s off-road prowess.

The thunderstorm was also a factor.

And the travel trailer hitched to the four-wheel drive Bronco played a role.

But mainly, Emerson concedes after the passage of half a century, it was his hubris that led to the predicament.

Emerson had moved his family from Sandy, east of Portland, to La Grande the previous year.

But he was no newcomer to either Porcupine Guard Station in particular, or to the Beatty Creek drainage where it stood.

Emerson, who’s 80 and lives in Cove, said he started hunting deer in that area, on the east side of the La Grande Watershed, in 1955.

“We didn’t hunt elk at that time — we got into that later,” he said with a chuckle.

Emerson’s destination on that holiday weekend in 1970 was Three Bucket Spring.

That’s just across the meadow from the guard station, and it had been the Emersons’ favorite hunting camp for many years.

The spring’s name, though unusual, is also descriptive.

“There were three wooden buckets about 2 feet in diameter set into the ground, the first one at the spring and two others below the first,” Emerson wrote in an email of his recollections that he sent to me. “This was on a slight slope so each bucket was at a lower elevation just below the one above, making the third bucket good, clean, cold water.”

Emerson surmises that the spring supplied water to the guard station, which was closed at that time.

In fact he doesn’t recall ever seeing any Forest Service employees at the guard station while camping nearby during the 1960s.

Emerson planned to spend Independence Day with his family in their 16-foot travel trailer.

To get to the campsite near Three Bucket Spring he had to drive across the meadow through which Beatty Creek flows.

Emerson stopped for a moment to survey the scene.

“It was pouring rain and there was lightning,” he said.

But not out of the meadow.

These tracks — ruts, really — suggested that the summer downpour had made the meadow even softer than usual.

Emerson’s wife at the time, Roxann, offered her opinion.

“I don’t think you ought to try that,” is the phrase Emerson remembers.

But he was convinced his Bronco, despite being saddled with the trailer, could make it across the meadow.

The Bronco alone probably would have.

But the trailer got high-centered as the rain sluiced down.

The trailer was mired. Staying overnight in the two-door Bronco wasn’t an option — the Emerson family included his 6-month-old daughter, Lanae, and her older siblings, Michelle and Doug.

But a savior was at hand.

Emerson had recently started what would turn into a 30-year career with the Oregon Department of Fish and Wildlife. Because his territory included the La Grande Watershed, he had a Forest Service master key that would open, among other locks, the one at the Porcupine Guard Station.

He led his family back across the soggy meadow to the snug wooden cabin.

Emerson kindled a fire in the stove and soon the guard station was warm and cozy.

The next morning he used the Bronco’s winch for the first time, yanking the trailer free.

Less than a year later Emerson was back at the guard station, again driving the Bronco.

But his purpose this time was quite different.

Emerson was there not to stay in the cabin, but to tear it apart.

Fortunately for him, nobody bid.

This is perhaps not surprising since the deal required the buyer to remove the structure. And it, unlike, say, a travel trailer, couldn’t be hitched to a Bronco and driven away intact.

When a friend told Emerson that the guard station was for sale, he called the Forest Service ranger and offered a single dollar.

He couldn’t accept a $1 bid. Federal regulations or something.

He proposed a dollar and a quarter.

And with that Emerson owned the Porcupine Guard Station.

Except now he had to dismantle a 240-square-foot structure.

In his email, Emerson described the guard station, still intact, and the task that confronted him during that summer of 1971.

“The front room large enough for a desk and a bed. The outer room was the kitchen and wash up room. There was a work shop adjacent to the guard station it was almost as large as the guard station with no foundation, and of course there was a well built outhouse. I had just purchased 4 acres of land north of La Grande and set up a double wide trailer and needed to build a garage and barn so now I had the lumber but it was almost 40 miles away in the mountains. I had a Ford Bronco and a flatbed trailer to haul the lumber.”

Emerson also had a regular job with ODFW, so he could work on the guard station only on weekends.

Although the sign at the site today claims that the guard station was removed in June 1971, Emerson said that’s not quite historically accurate.

Emerson continues the story in his email.

“I would dismantle in the mornings and load the trailer and head home. After several weeks I realized I wasn’t hauling as much lumber as I was dismantling so I borrowed a truck with a steel box on it from a friend. I finally finished the job the first of October and piled all of the refuse in the foundation confines and the Forest Service burned it that winter.”

Emerson took the outhouse, too.

He moved that to another of his favorite hunting camps, on Beaver Creek below the La Grande Watershed.

It stood there for several years, he said, until someone burned it down.

Pulling the guard station apart was only the first part of the job, Emerson said.

After devoting the summer to that task, he said he spent much of the following winter pulling nails from the boards. He ended up filling two 5-gallon buckets.

Among the remaining mysteries is when the guard station was built.

The Forest Service couldn’t answer the question when I asked.

Emerson said the interior walls were insulated with sheets of newspaper, all bearing dates from 1919. Whether those papers were contemporary with the construction, Emerson can’t say.

He said the lumber, a mixture of fir and pine, was of high quality and quite sound.

From his email: “The rafters were rough 2x6 and siding and inside planed 1x4s and 1x6. The exterior was 1X4 drop. The shop was of the same lumber. All of the lumber would be classified as grade 1.”

Emerson refashioned that good wood into a 2-car garage and a small barn on his property north of La Grande.

He sold that property in 1981 when, as the first resident manager of the Elkhorn Wildlife Area, the ODFW’s winter elk-feeding operation near North Powder, he moved into the home at the area’s headquarters.

Emerson said he drove by his old property recently and the garage and barn — the legacy of the Porcupine Guard Station — were still standing, their boards still sound more than a century after they were sawed.

Changes over the decades

Emerson’s descriptions of the La Grande Watershed and its environs during the 1960s and early 1970s portray a place quite different from what you see there today.

The reason, mainly, is fire.

One fire in particular.

The lightning-sparked Anthony fire burned about 20,000 acres during the summer of 1960. One of the larger blazes in Northeast Oregon during the 20th century, it covered much of the land north of the Anthony Lakes Highway from around Gorham Butte west to the Ladd Canyon Road.

Today much of the burned area is covered by a dense forest of lodgepole pine trees 20 or more feet tall — a dog’s hair thicket, in the piquant term favored by foresters.

Some of these stands are all but impenetrable, and if you do manage to make it into the forest you can’t see far.

But Emerson said that in the decade or so after the fire, the fledgling lodgepoles were less than knee-high.

“Out in the burn you could see miles in any direction,” he said.

The Anthony fire stopped not far from the Porcupine Guard Station, Emerson said.

He also remembers the forests that existed in that area before a pine beetle infestation.

“In those days, all of that country was like being out in a park,” Emerson said.

How The Story Happened

The story on this page, featuring Ken Emerson’s recollections, came about after Emerson read the story published in this space on Aug. 8. That story dealt with my curiosity regarding the erstwhile Porcupine Guard Station in the La Grande Watershed, and in particular what had become of it.

The only remnant of the structure is a concrete foundation. A Forest Service sign at the site states that the guard station was removed in June 1971. The Aug. 8 article drew Emerson’s attention for a very good reason: he’s the one who removed it.

I was able to complete the tale because Emerson, in addition to sending me an email recounting his experience with the guard station, was gracious enough to tell me that story — and quite a few others — in a recent phone interview.

I greatly enjoyed the conversation.

I hadn’t talked with Emerson for many years — so far as I can recall not since he retired in 1999 as manager of the Elkhorn Wildlife Area, a state-run winter elk-feeding operation in Baker and Union counties that I’ve been writing about since I started at the Baker City Herald in November 1992.