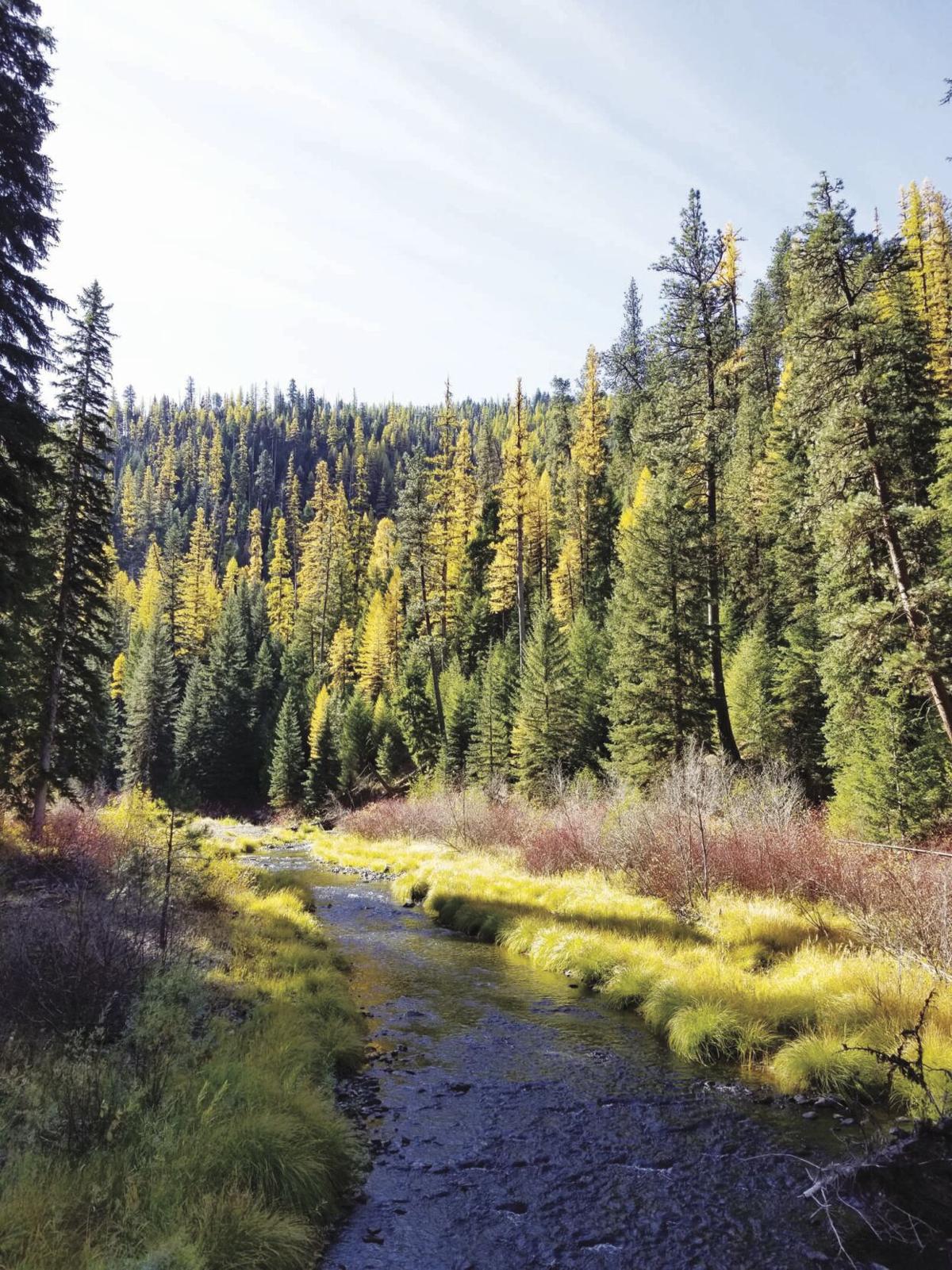 The yellow-orange of tamarack trees brightens the scene along Granite Creek. 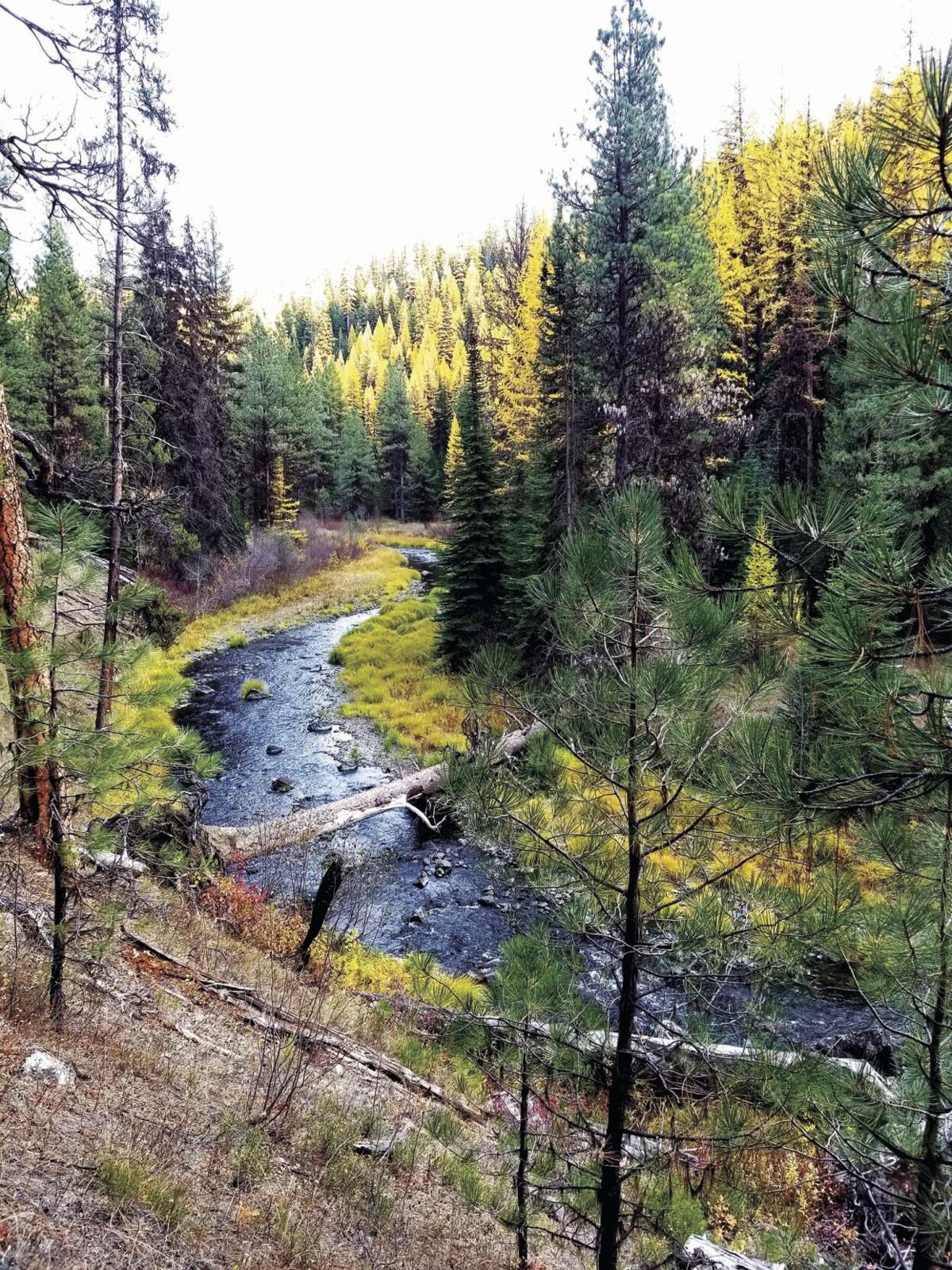 Granite Creek wends its way toward its confluence with the North Fork John Day River.

The yellow-orange of tamarack trees brightens the scene along Granite Creek.

Granite Creek wends its way toward its confluence with the North Fork John Day River.

We went searching for the Singing Rock on the sort of October day when both the cloying heat of summer and the nostril-clenching chill of winter seem more fantasy than recent or looming reality.

The sky was blemished by just a scrim of benign cirrus.

When we parked at the Granite Creek trailhead on the morning of Oct. 17 the temperature was 45 and the air had the bracing, but benevolent, tinge exclusive to autumn.

As we hiked along the old mining road beside the creek, one of two routes down its canyon to the confluence with the North Fork John Day River, it was just cool enough to justify a light jacket. But whenever we came out of the trees the shafts of sunlight carried a discernible warmth that would be absent in, say, January.

The road meets the trail about a mile and a half from the trailhead. From there the route, through the North Fork John Day Wilderness, is all by trail, another 2.3 miles to the wilderness area’s namesake river.

It’s a fine trail, well-maintained and never straying too far from the fetching riffles and crystalline pools of Granite Creek.

Our hike was brightened not only by the autumn sunshine but also by the tamaracks, scattered among the firs and pines and spruces and all but beaming, with their yellow-orange needles, against the comparatively dour green backdrop of their coniferous cousins.

Tamaracks, known more formally as the western larch, are conifers, but of the rare deciduous type. Rather than holding their green needles all year, tamaracks, in the manner of maples and willows, drop theirs each fall. But before the needles flutter down they turn that inimitable color. It is to my eyes ones of the signature shades of the Blue Mountains, joining the winter trio of blue sky, white snow and the red-tan bark of a mature ponderosa pine.

I learned about the Singing Rock from an acquaintance. The rock, which is near the North Fork John Day trail a couple miles downriver from the mouth of Granite Creek, sometimes “sings” when the wind is right.

(The Forest Service map I consulted shows a Wind Rock in this vicinity, undoubtedly the same feature.)

A fresh breeze was blowing upriver the day of our hike, and I hoped this meant we would be treated to some natural music.

Alas, although we saw plenty of rocks near the trail in the approximate place, we heard nothing melodious except the pleasant bass rumble of the river below.

But this slight disappointment didn’t diminish the beauty of the North Fork John Day, one of Oregon’s great wilderness canyons.

Although the trail lacks the multi-county (even multi-state) views typical of alpine trails in the Eagle Cap Wilderness, the eclectic nature of a naturally flowing river is a satisfying substitute.

No reach is quite the same as another. In places the river froths between boulders, loud enough to thwart conversations. But just around the bend the gradient relaxes and the water turns placid, seemingly as still as a farm pond.

We saw no other hiker despite covering 15 total miles. This solitude perhaps exemplifies the “wildness” of this wilderness better than any other anecdote could.

The weather, as you’ve no doubt noticed, has changed. Winter, as it must, is waxing.

But the Granite Creek and North Fork John Day trails, all of which are below 5,000 feet, should be accessible for a while yet.

Drive first to Granite, about 46 miles west of Baker City via Highway 7 and the Sumpter-Granite Highway. From Granite drive west on Road 10 (Grant County Road 24) for about 1.5 miles. Turn right on Road 1035 at a sign for Granite Creek trail, and follow it for about 4.5 miles to the trailhead.