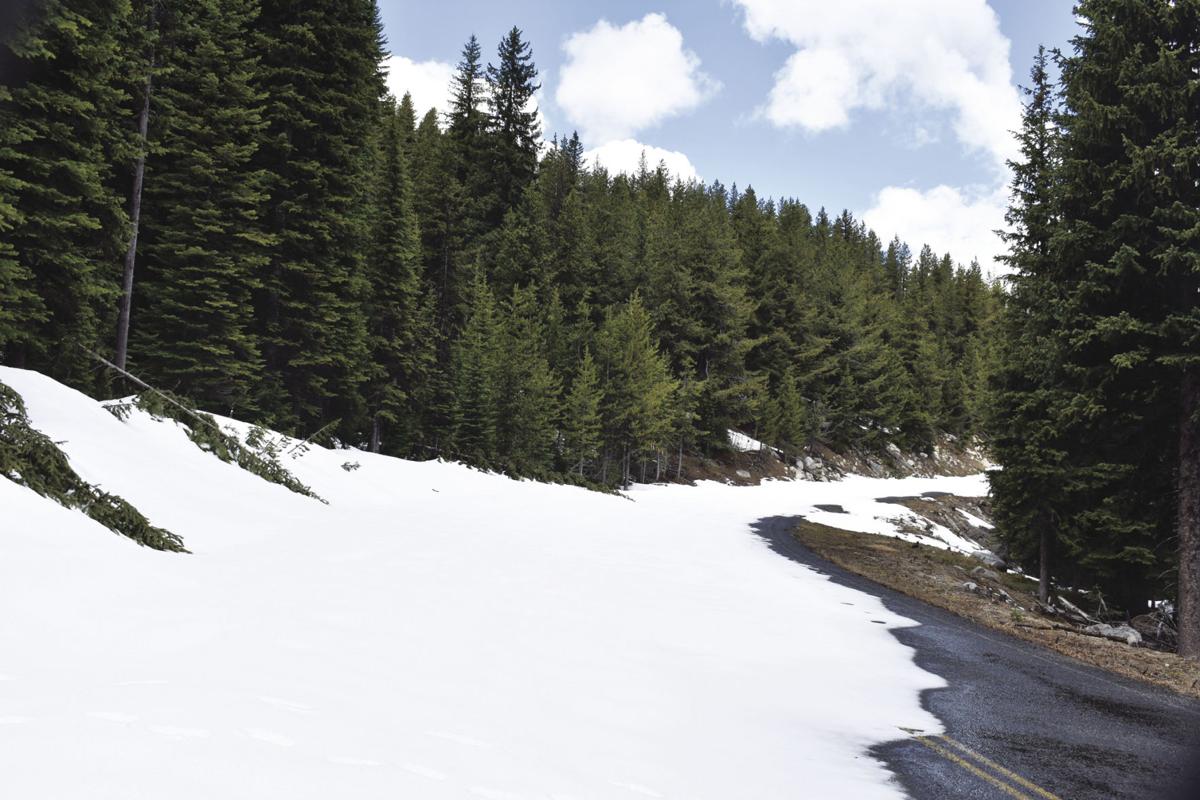 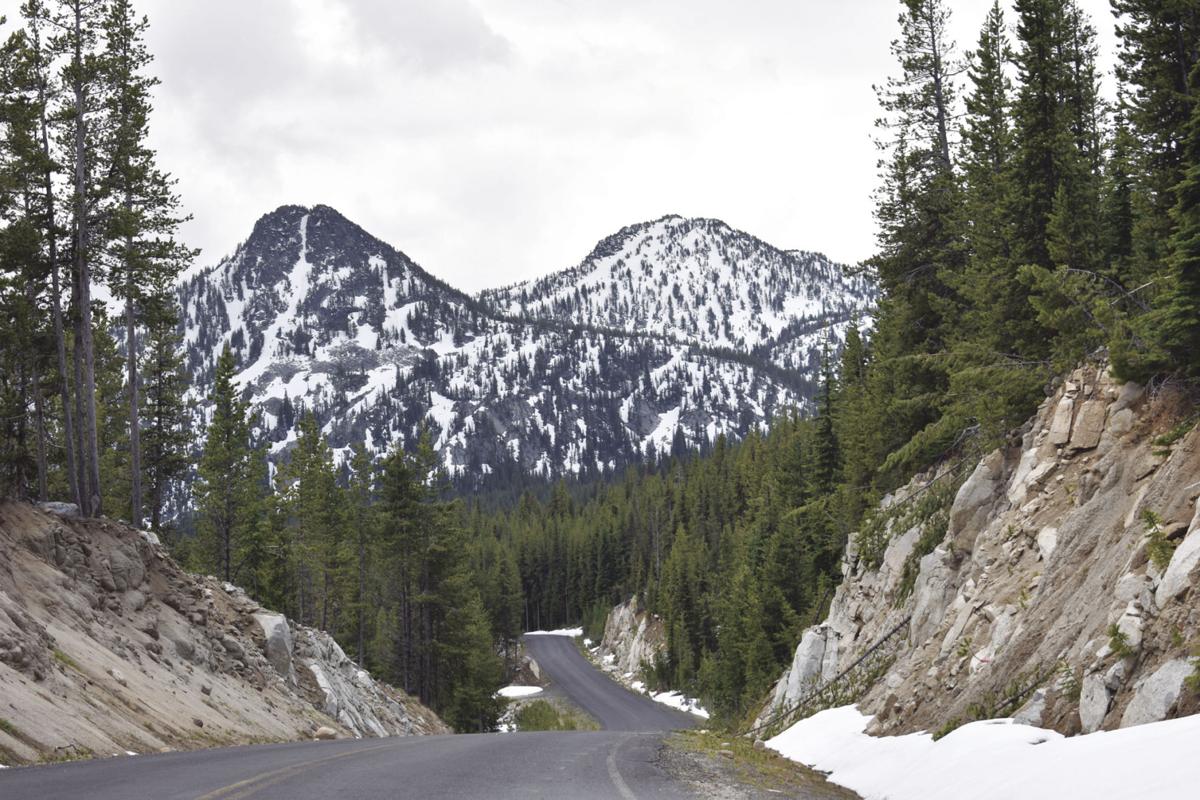 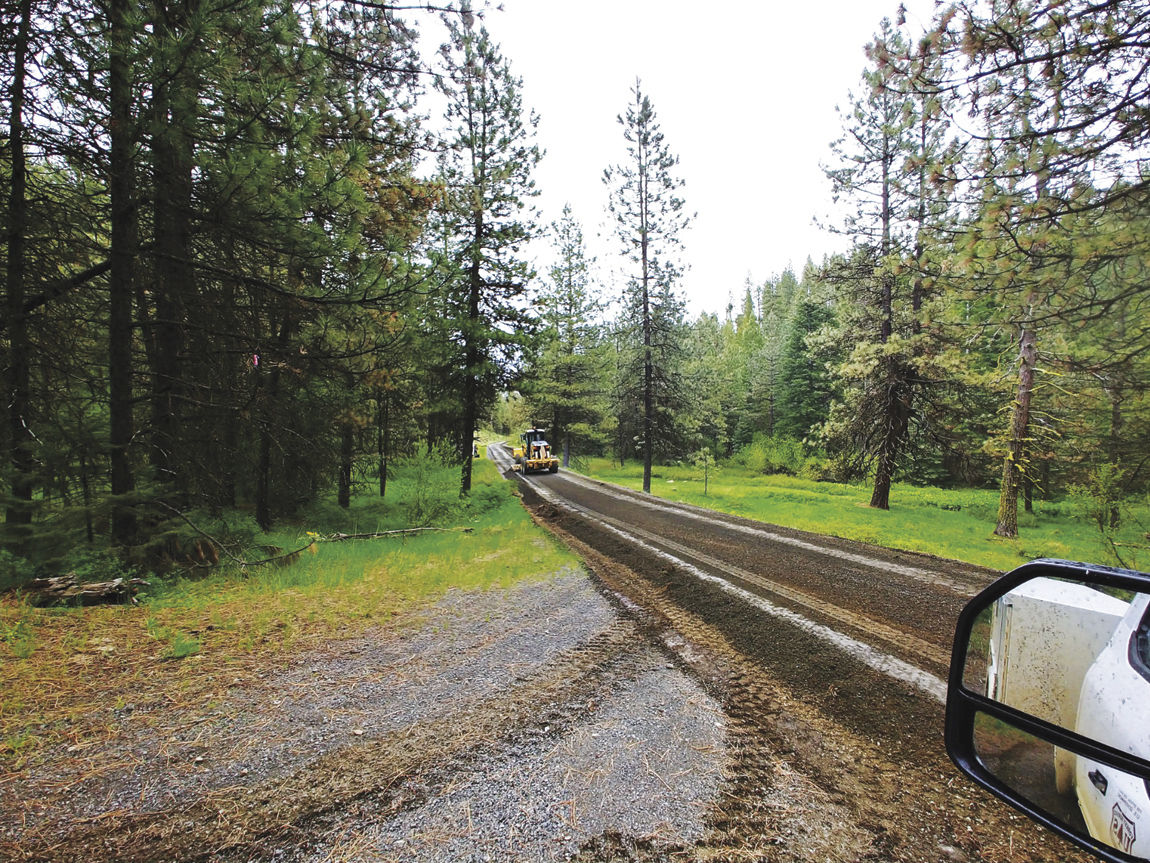 A contractor grades the Empire Gulch Road near Eagle Creek this spring. 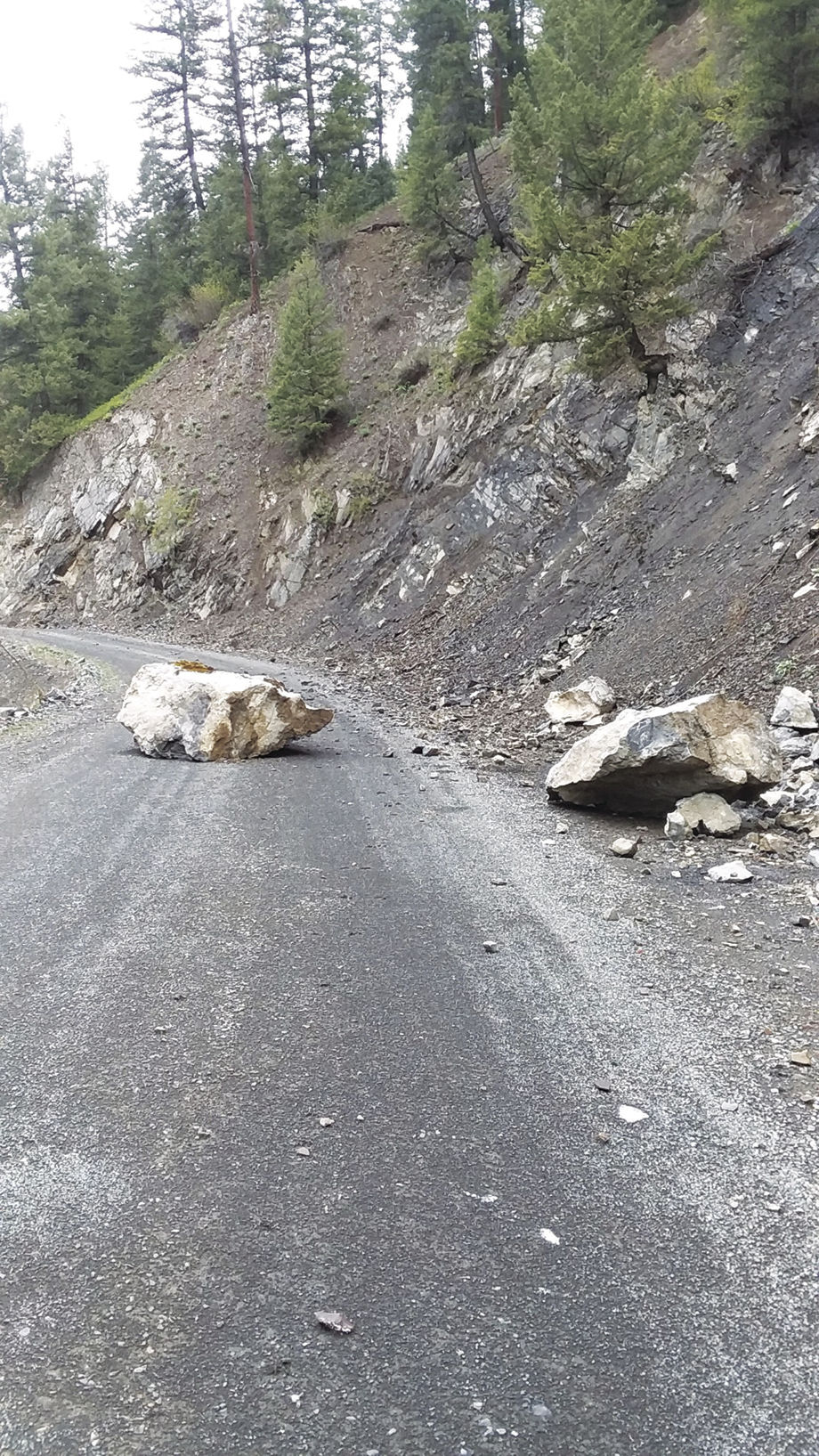 These rocks were moved off the Eagle Creek Road, in the southern Wallowa Mountains, earlier this year. 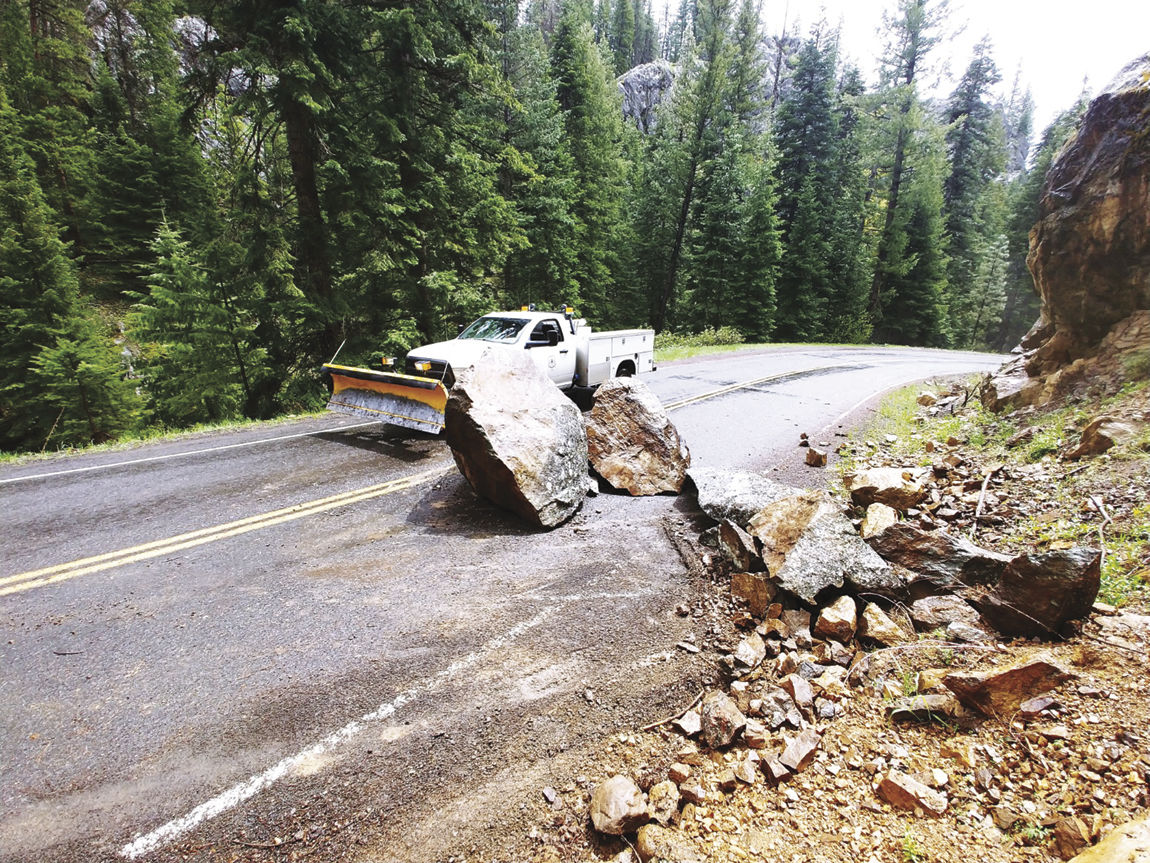 Boulders on the Wallowa Mountain Loop Road north of Halfway earlier this spring. The rocks have been removed and the popular route between Halfway and Joseph is open.

A contractor grades the Empire Gulch Road near Eagle Creek this spring.

Boulders on the Wallowa Mountain Loop Road north of Halfway earlier this spring. The rocks have been removed and the popular route between Halfway and Joseph is open.

Dan Story was just trying to make it easier for drivers to see approaching cars as they steered through the serpentine Elkhorn Drive Scenic Byway west of Baker City.

He ended up thwarting blizzards.

Story, who is the road manager for the Whitman District of the Wallowa-Whitman National Forest, can’t actually divert the storms that slather many feet of snow every winter on the Elkhorn Drive, the second-highest paved road in Oregon.

(Not that snow is confined to the coldest season — high in the Elkhorns snow fell just this week, and earlier in June a storm dropped close to a foot above 7,000 feet.)

But a project four years ago, which Story undertook for a completely different reason, seems to have had the unexpected benefit of shrinking the period when snow blocks a section of the two-lane paved highway that circles the Elkhorns over its 106 miles.

The actual purpose was “brushing.”

Story hired a contractor to cut trees with a diameter of less than 9 inches growing within 6 feet of the shoulder of the byway between Crane Flats, a few miles north of Granite, and the Elkhorn Summit.

Snowplows don’t ply that roughly 17-mile section of the byway, so it’s generally closed to vehicles, except snowmobiles, for more than half the year.

Elkhorn Summit, at 7,392 feet, is about 2 miles west of Anthony Lakes. The only paved road in Oregon that reaches a higher point is the Rim Drive in Crater Lake National Park, which tops out around 7,900 feet.

Those roadside trees, which in places grew thickly, extended branches far enough to impede drivers’ views on some of the dozens of sharp curves on that section, Story said.

Removing the trees had the intended effect of improving the sightlines, Story said.

But since the brushing was done he’s noticed that snow melts sooner in late spring and early summer than it did earlier in his tenure.

“Last year it was open on June 11, the earliest in my 10 years of doing this,” Story said.

The explanation seems simple to Story.

The trees removed during the brushing project, in addition to obscuring views, also cast shadows over the pavement.

With the trees gone, the sun shines longer on the roadway each day.

Story also noticed that a short section near Elkhorn Summit, where an especially deep drift usually formed each winter, hasn’t accumulated in the past few winters since the brushing work.

“I have to assume I’ve changed the wind pattern,” he said. “It’s kind of a quirky thing. I was really surprised.”

Last year Story extended the brushing project to include the Elkhorn Drive between Granite and Crane Flats, as well as short sections of Forest Road 52, which starts at the North Fork John Day River, and Forest Road 51, which branches off Road 52 and heads north to the Grande Ronde River and Starkey.

Besides speeding the snowmelt, the brushing has reduced the number of trees that topple across the roads each winter and spring, Story said.

But no amount of brushing can influence weather trends.

And Story said conditions this spring — in particular the series of unseasonably strong and cold storms over the past month or so — have kept some higher-elevation roads blocked by snow.

That includes a short section of the Elkhorn Drive. Lingering snow still blocked the road Thursday about one mile west of Anthony Lakes Ski Area, and in places over the next 4 miles or so.

With warmer weather forecast for the next several days, the byway could potentially open within the next week.

The higher sections of the Ladd Canyon Road — Forest Road 43 — which leads from Grande Ronde Lake to Interstate 84, are also still blocked by snowdrifts, Story said.

The Marble Creek Pass Road, which connects the Baker and Sumpter valleys, is blocked by drifts near the 7,542-foot summit.

“This has been a strange year,” Story said. “A couple of roads opened earlier than usual.”

That list of roads includes a section of another of the Wallowa-Whitman’s scenic byways — Hells Canyon.

The Wallowa Mountain Loop Road, also known as Forest Road 39, crosses high ground between Highway 86 on the south end, in Baker County, and the highway leading from Joseph to Imnaha, in Wallowa County.

Story said travelers were getting through as early as May 14, and the 39 Road was officially open May 18.

Some years the route isn’t open until June, but the snowpack this winter was below average in the eastern part of the Wallowa Mountains.

That was decidedly not the case on the western side of the great range, however.

The automated snow-measuring station at Moss Springs, above Cove, recorded the second-highest snowpack in its 39-year history this year.

The snow-water equivalent — a measure of how much water the snow will yield when it melts, a statistic that predicts water supply more accurately than snow depth does — reached a maximum of 36.6 inches at Moss Springs on April 5.

That’s the most since 1982, when the Moss Springs station measured its all-time record of 38.8 inches on April 14.

Story said a Forest Service employee couldn’t drive all the way to Moss Springs earlier this week due to lingering snow. He expects that road will be open soon.

Most if not all roads along the southern Wallowas, from the Medical Springs Highway east to Hells Canyon, are open — and in some cases smoother than usual.

Story said he hired a contractor this spring to grade sections of several popular roads in that section of the Wallowa-Whitman, including about 33 miles of Road 77, the Eagle Creek Road.

That road has been graded from the Halfway Summit, along Highway 86 between Halfway and Richland about 48 miles east of Baker City, to the junction with Road 67 near Tamarack Campground.

The contractor has also graded the Empire Gulch Road between 5 Corners and Eagle Creek, Forest Road 70 from 5 Corners to Goose Creek, and the Fish Lake Road, No. 66, north of Halfway.

“The La Grande District had a little, but we still had pretty good snowpack when that flooding hit,” he said.

Rain and melting snow did dislodge more rocks than normal, especially along sections of the 39 Road between Halfway and Joseph.

Story said he had to hire heavy equipment to move some of the multi-ton boulders that landed in the road.

Brandon Barnett, who is Story’s counterpart at the Wallowa Mountains office in Enterprise, said although he hasn’t traveled as much this spring as usual due to the coronavirus pandemic, some popular routes on the north side of the Wallowa-Whitman are open.

That includes the 46 Road in the Chesnimnus and Zumwalt Prairie areas, and the Whiskey Creek Road from Wallowa to Highway 3 north of Enterprise.

Barnett said he hasn’t had a report about the road to Buckhorn Lookout.

A contractor has been grading the Hat Point Road, and Barnett said the crew planned to plow through the remaining snowdrifts leading to the popular viewpoint of Hells Canyon by this weekend.

Barnett said he hasn’t had recent reports about the Lostine River Road leading to Two Pan Campground, or the Big Canyon Road south of Highway 82.