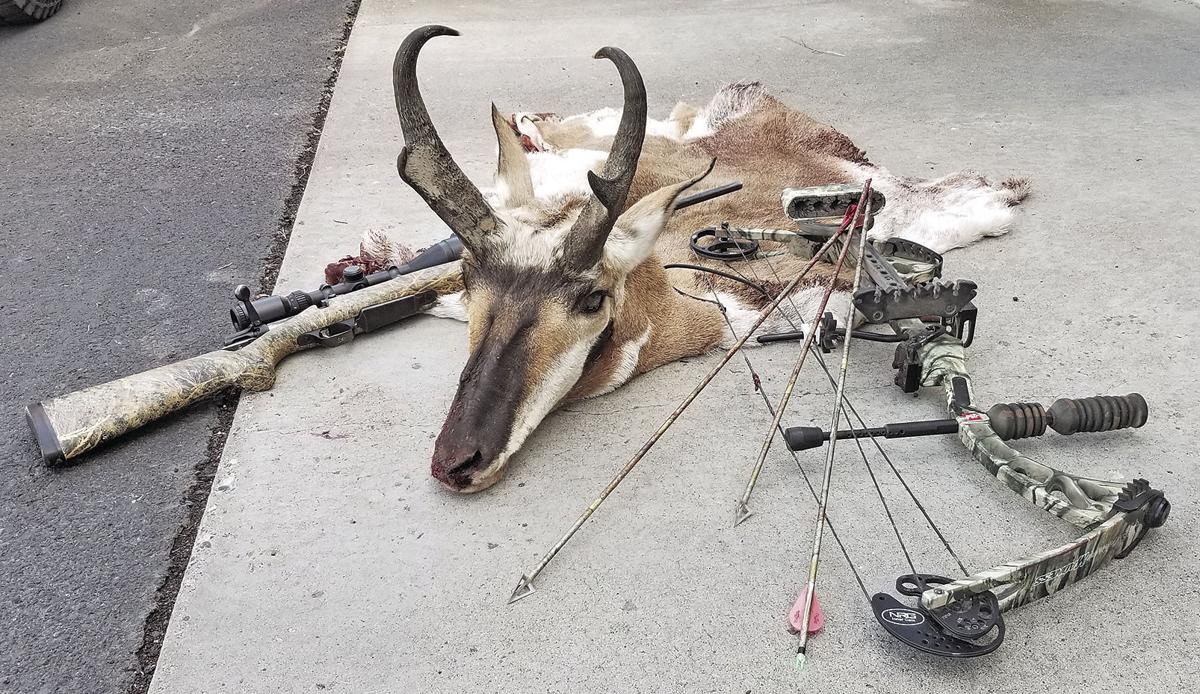 An archery hunter shot this pronghorn antelope with a rifle in the Maury Unit of Central Oregon and then shot it with three arrows. 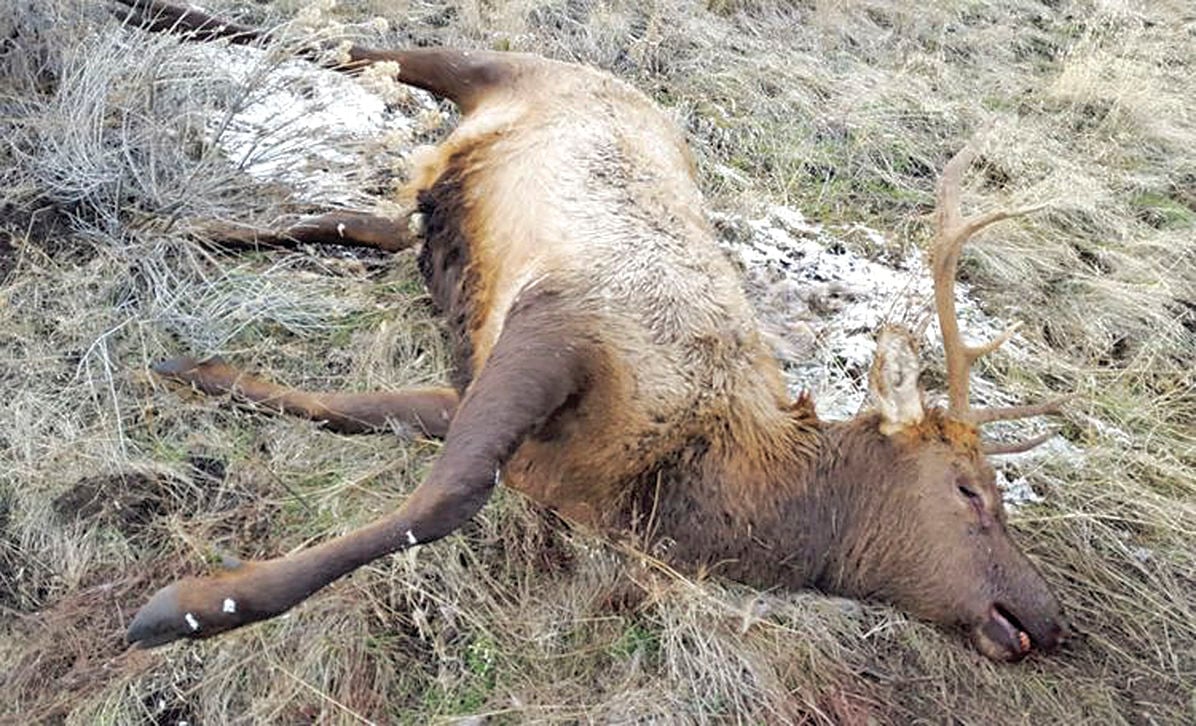 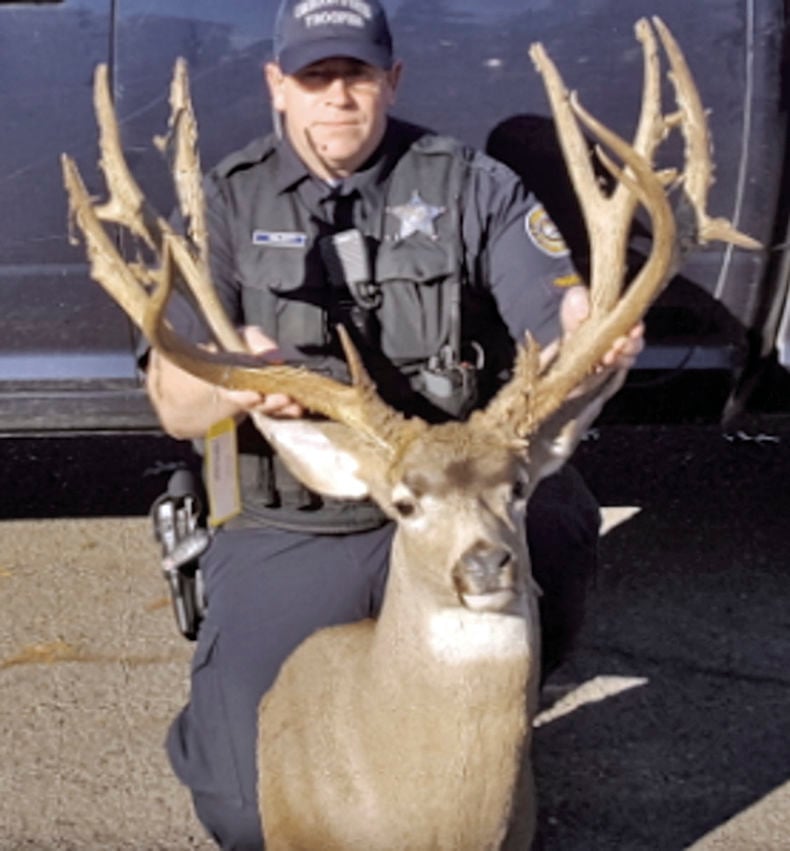 The 8-point mule deer taken in the Steens Mountain Unit in 2015 measured first that year for Non-Typical Archery Mule Deer and 8th all-time in the state of Oregon at the Northwest Sportsman Show. But as Oregon State Police investigated the hunter in May 2018 in connection to other crimes, they learned the record-setting deer had been shot with a rifle. The hunter had claimed to have taken the deer during archery season, with a valid archery tag.

An archery hunter shot this pronghorn antelope with a rifle in the Maury Unit of Central Oregon and then shot it with three arrows.

The 8-point mule deer taken in the Steens Mountain Unit in 2015 measured first that year for Non-Typical Archery Mule Deer and 8th all-time in the state of Oregon at the Northwest Sportsman Show. But as Oregon State Police investigated the hunter in May 2018 in connection to other crimes, they learned the record-setting deer had been shot with a rifle. The hunter had claimed to have taken the deer during archery season, with a valid archery tag.

Oregon’s wildlife belongs to every resident, and someone who illegally kills, say, a fine mule deer buck not only deprives hunters of the chance to put meat on the table, but also affects people who like to watch animals through binoculars or a spotting scope.

“When people poach animals they’re stealing from all Oregonians,” said Shaw, the newly hired coordinator of the Oregon Department of Fish and Wildlife’s (ODFW) Anti-Poaching Campaign.

“Poaching is a problem, a blatant disregard by some people for our laws,” Shaw said.

This new ODFW campaign is backed by more than words.

The Oregon Legislature allocated $4.4 million to help ODFW and two other state agencies target poachers across the state — Oregon State Police, which enforces hunting and fishing laws; and the Oregon Department of Justice, which prosecutes poachers.

“This legislation creates new opportunities for us to combine efforts with our law enforcement and judicial partners to reduce fish and wildlife crimes,” ODFW Director Curt Melcher said in a press release. “And most importantly, it will translate to improved fish and wildlife populations for the enjoyment of all Oregonians and our visitors.”

The campaign includes $2.2 million to hire four State Police fish and wildlife troopers, as well as a sergeant, Shaw said.

OSP will also buy additional trail cameras, which can capture images of poachers in remote areas or places where poaching has been a problem or is suspected to be rampant.

Even with the additional OSP troopers on duty, the odds of an officer catching a poacher in the act in Oregon, the 10th-largest state, covering 96,000 square miles, are low.

“It’s a challenge to patrol that amount of territory,” Shaw said, “and the Legislature recognizes that.”

The campaign also allows the Department of Justice to hire a prosecutor who can travel across the state to help counties prosecute poaching cases if their schedules make that difficult.

Mark Schoenborn, an OSP trooper who works in Multnomah and Clackamas counties, said the new roving prosecutor will be a beneficial addition to the state’s anti-poaching efforts.

“Having a dedicated fish and wildlife (prosecutor) is beneficial because of the nature of wildlife crimes,” Schoenborn said in a press release.

The third prong of the anti-poaching campaign is the education and awareness campaign that Shaw was hired to direct.

Although she’s new to ODFW, having a background in campaign management and community education, Shaw said she “came from a hunting and fishing family, and I’ve lived in Oregon most of my life.”

Shaw said one of her goals is to encourage all Oregonians, both hunters and non-hunters, to both recognize potential poaching and, equally important, empower them to report incidents.

“Now with our populations changing and more people than ever recreating across the state, it’s important that we educate all Oregonians on how to recognize poaching when they see it,” Shaw said. “And to empower them to report the crime.”

“We never had the opportunity to broadly influence education in every county,” Hagan said. “We never have had, in the past, a program or the staff to do that.”

OSP has operated the TIP — Turn In Poachers — phone line for many years. It allows anyone to dial a number — *OSP or 1-800-452-7888 — any time of day and alert OSP officers to potential poaching.

Rewards range from $100 to $1,000 depending on species, with the $1,000 for cases involving bighorn sheep or mountain goats, both of which are once-in-a-lifetime hunting opportunities, or moose, for which there is no legal hunting in Oregon.

But a few years ago the state also offered, in lieu of cash rewards, preference points which give hunters a better chance to draw a hunting tag.

During an informal survey at a sports show in Redmond recently, almost all the people surveyed knew about the TIP program, Shaw said, but fewer than half knew that tipsters could choose between cash and preference points.

“We’re really going to push that,” with the new campaign, Shaw said.

State Rep. Bill Witt, a Salem Democrat who chairs the House Committee on Natural Resources and is an avid hunter, sponsored the legislation creating the anti-poaching campaign.

“We need to stop the poaching to save our precious wildlife resources, but also because it is unfair to true sportsmen, honest hunters and anglers who obey laws and bag limits and just want to enjoy a day in the field,” Witt said in the press release.