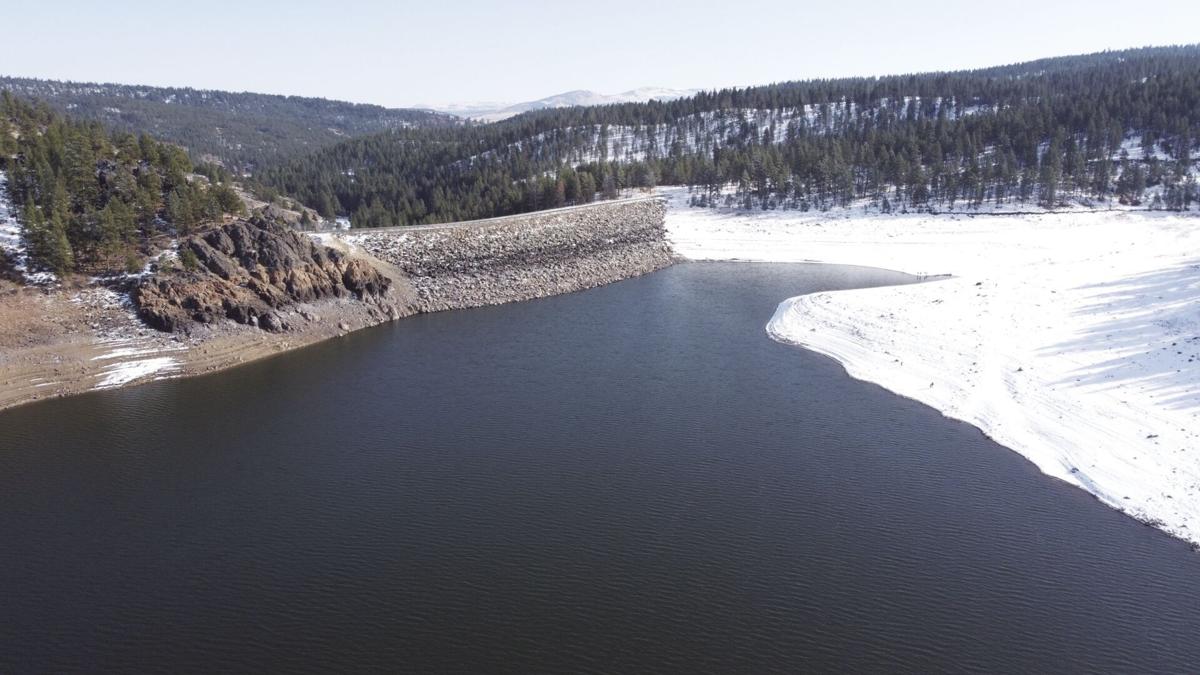 This image, taken from a drone flying about 200 feet above Phillips Reservoir near Baker City, shows Mason Dam. Most of the snow-covered area at right is usually underwater but has been exposed as the reservoir, due to demand for irrigation water and a drought, has receded. It is holding about 8% of its capacity. 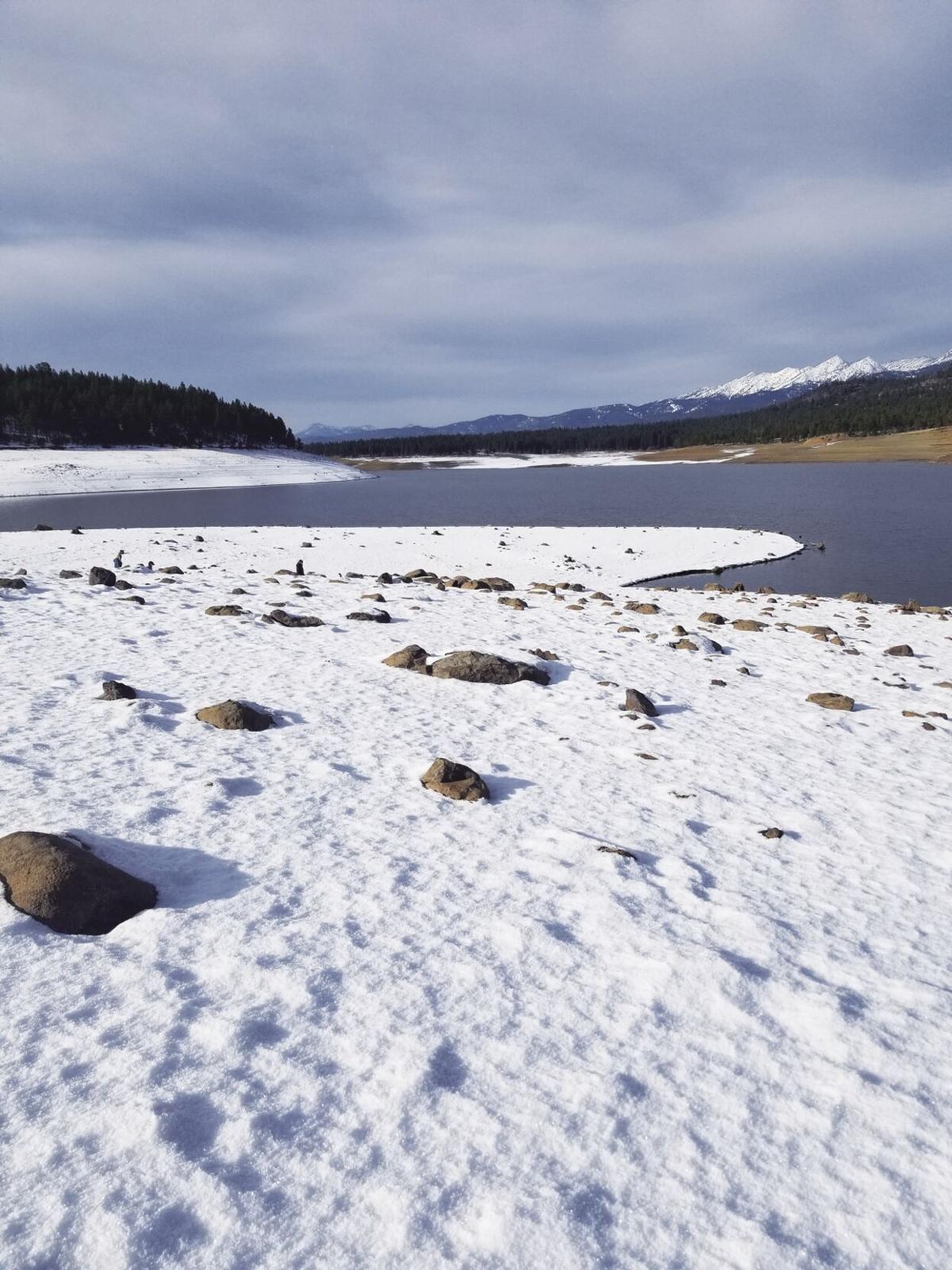 A wide swath of shoreline has been exposed as Phillips Reservoir dropped during the summer and early fall. 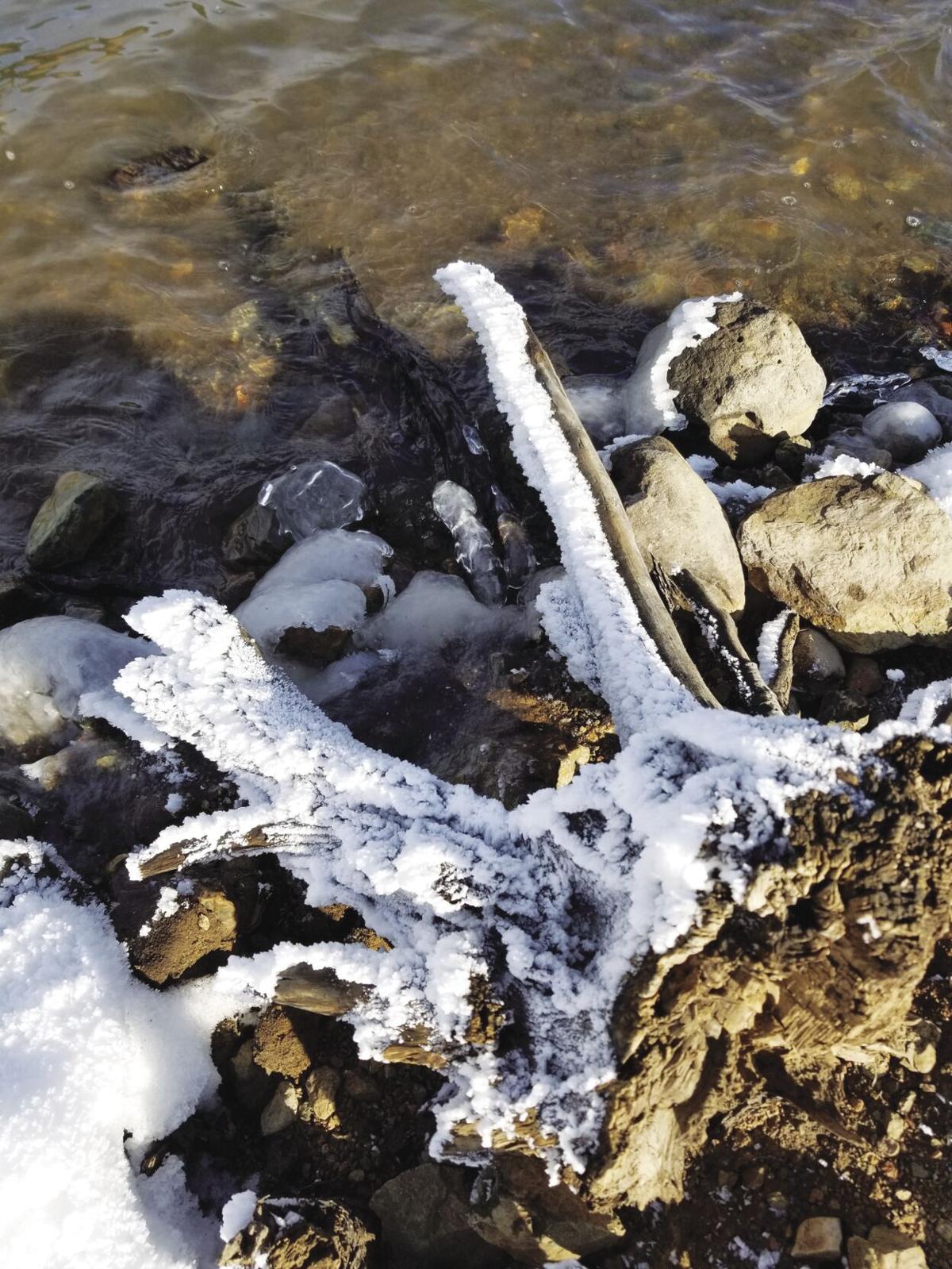 I like to walk where, on a majority of days in any given year, I would splash.

It is the nature of reservoirs to recede seasonally.

And reservoirs in our arid region can shrink as dramatically as a wool sweater washed in hot water, especially when drought and heavy demand for irrigation water coincide.

Which is to say, summer.

A proximate example of the phenomenon, and one I visit often, is Phillips Reservoir.

The reservoir, which sprawls across 2,400 acres when full, impounds the Powder River at the eastern end of the Sumpter Valley, about 15 miles southwest of Baker City.

Phillips is not full now.

Indeed it is far closer to empty, holding about 8% of its capacity.

The reservoir’s recession has revealed a swath of land that typically is submerged.

I am forever intrigued by the chance to go to places that are normally off limits, to hike what are in effect temporary trails.

A whole lot of trails, in this case.

Albeit trails that follow precisely the same route and are separated by just a few inches.

As reservoirs slowly subside — and Phillips, being rather larger than, say, a bathtub, doesn’t empty rapidly — the waves erode the shoreline and create a series of sinuous benches that resemble, from a distance, the bleachers in a football stadium, albeit curved rather than straight.

Altitude as well as distance accentuates this effect, something I was pleased to experience on a recent Sunday excursion to the reservoir.

I brought a new toy.

Except the Mavic Mini drone is somewhat more sophisticated than that word, toy, implies.

Toys, at least the ones that I have been acquainted with, can’t fly 400 feet above the ground and figure out how to return to their takeoff spot if the operator gets confused.

(As I often do even when I have but two dimensions to deal with — relaxing on a sofa, for instance.)

Like as not I never will delve much beyond the basic operations. But I’m satisfied simply flying the thing around and marveling at the new perspective it affords on familiar places.

(Its gimbal-mounted camera takes videos as well as photographs.)

Once the drone was safely back in its case — or as safe as my acquisitions can be; I’ve proved quite capable of damaging items even when they’re perfectly still — we started hiking west along the reservoir’s south shore.

My wife, Lisa, and our son, Max, and daughter, Olivia, found a stump that had been transformed by hoarfrost into a fetching, whimsical sculpture.

It occurred to me that this stump, its base just a few inches above the water, probably has been submerged very nearly constantly since Mason Dam was finished in 1967 and the Powder’s water began filling the valley.

The reservoir has dropped as low as it is now in fewer than 10 autumns since it first filled.

It was a fine day for a hike, sunny with a breeze that was brisk but not frigid. The reservoir, not yet frozen into its customary winter gray, showed off its range of colors — nearly green from some angles but a deep cobalt from the elevated vantage point of the drone.

The south shore is the better side to explore the reservoir’s rarely revealed shore, I think. The slopes are a bit steeper and the resulting topography more interesting, smooth and sandy stretches interrupted by boulder fields.

As I walk along I wonder what the Powder River canyon looked like before it was inundated.

The south side also affords expansive views, across the water, of the Elkhorn Mountains, including the range’s apex, Rock Creek Butte. The 9,106-foot peak, which can seem a relatively modest summit from certain directions, is from the reservoir quite imposing, with the pyramidal shape that reminds me of the mountain silhouettes that form the backdrop of Roadrunner cartoons.

The easiest way to get to the shoreline is to drive across Mason Dam and park on the south side. Drive Highway 7 south from Baker City and turn left onto the Black Mountain Road, No. 1145, just beyond Milepost 35. The dam is just a few hundred yards from the highway.

This route might not be accessible if logging crews aren’t plowing the Black Mountain Road.