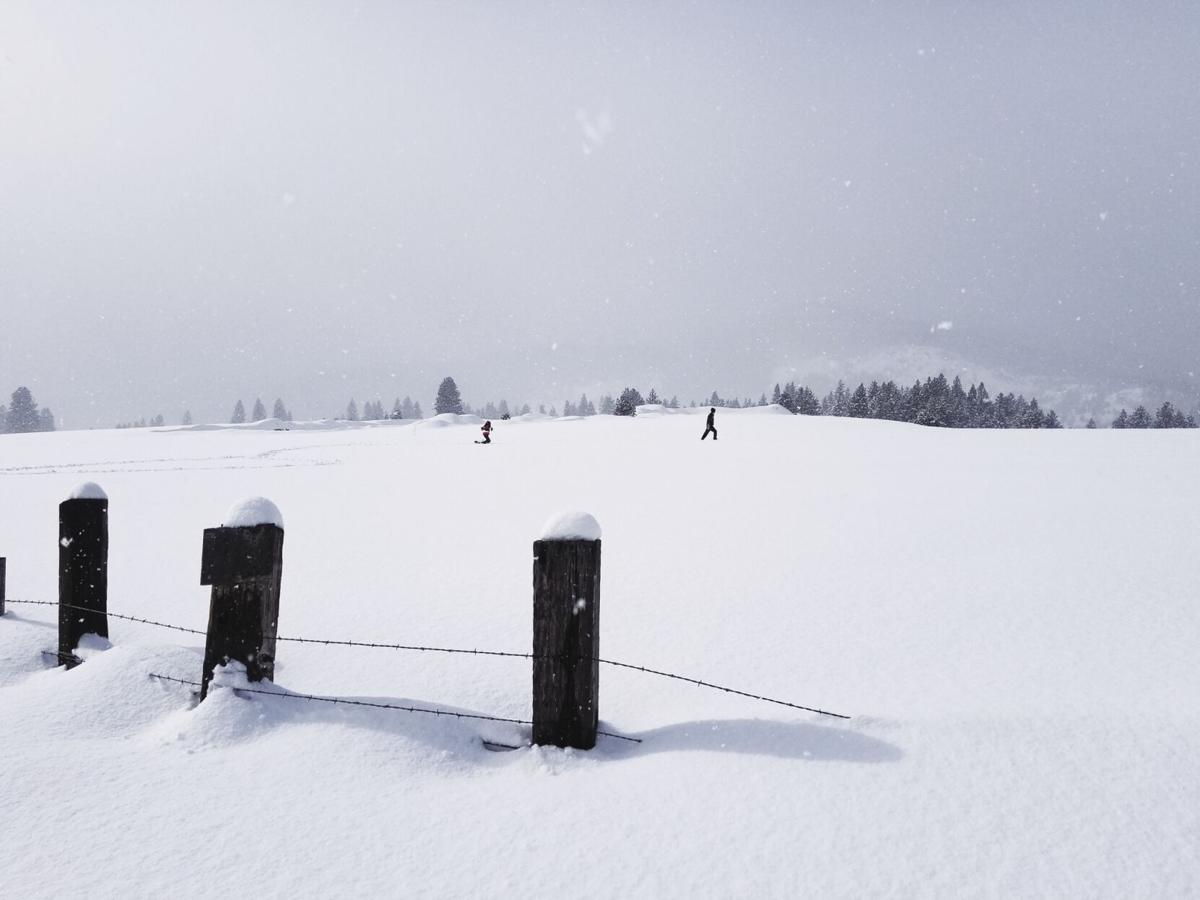 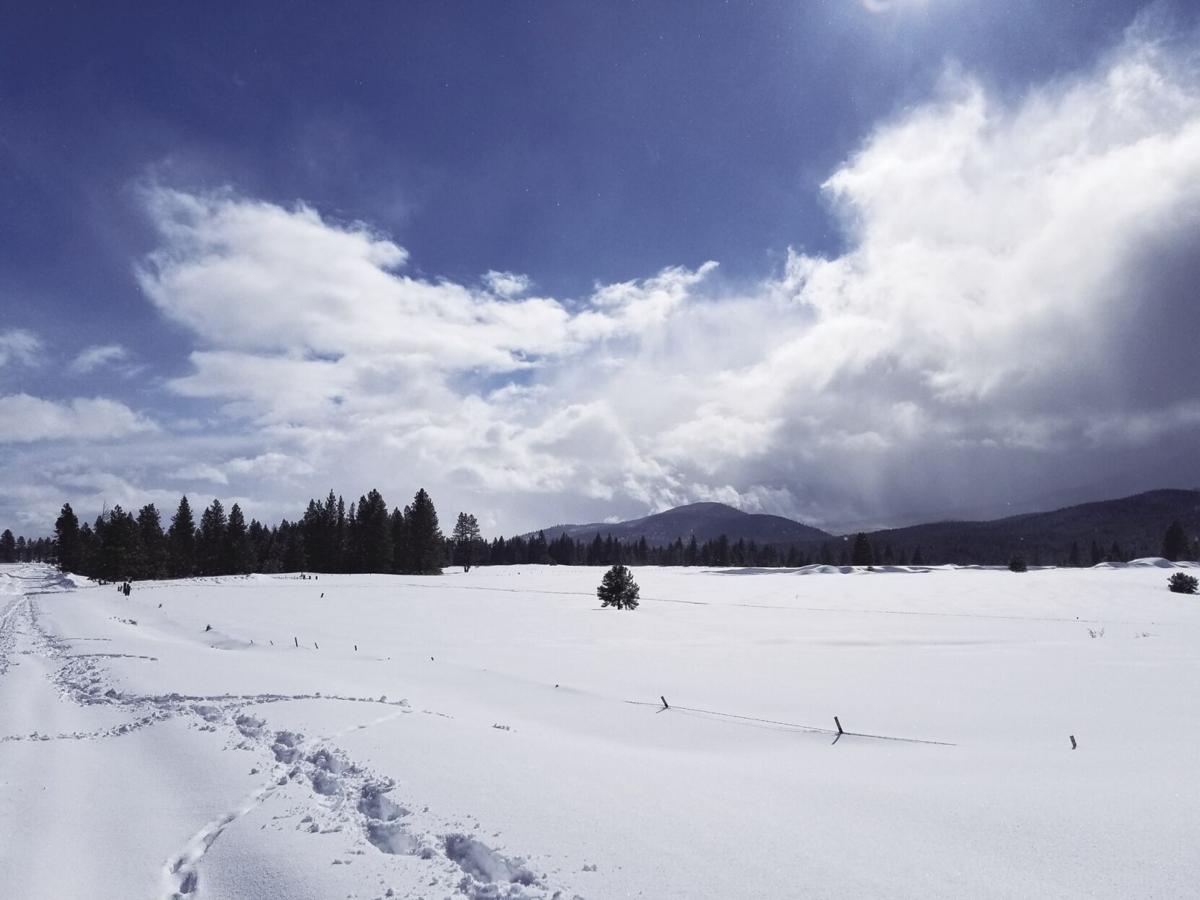 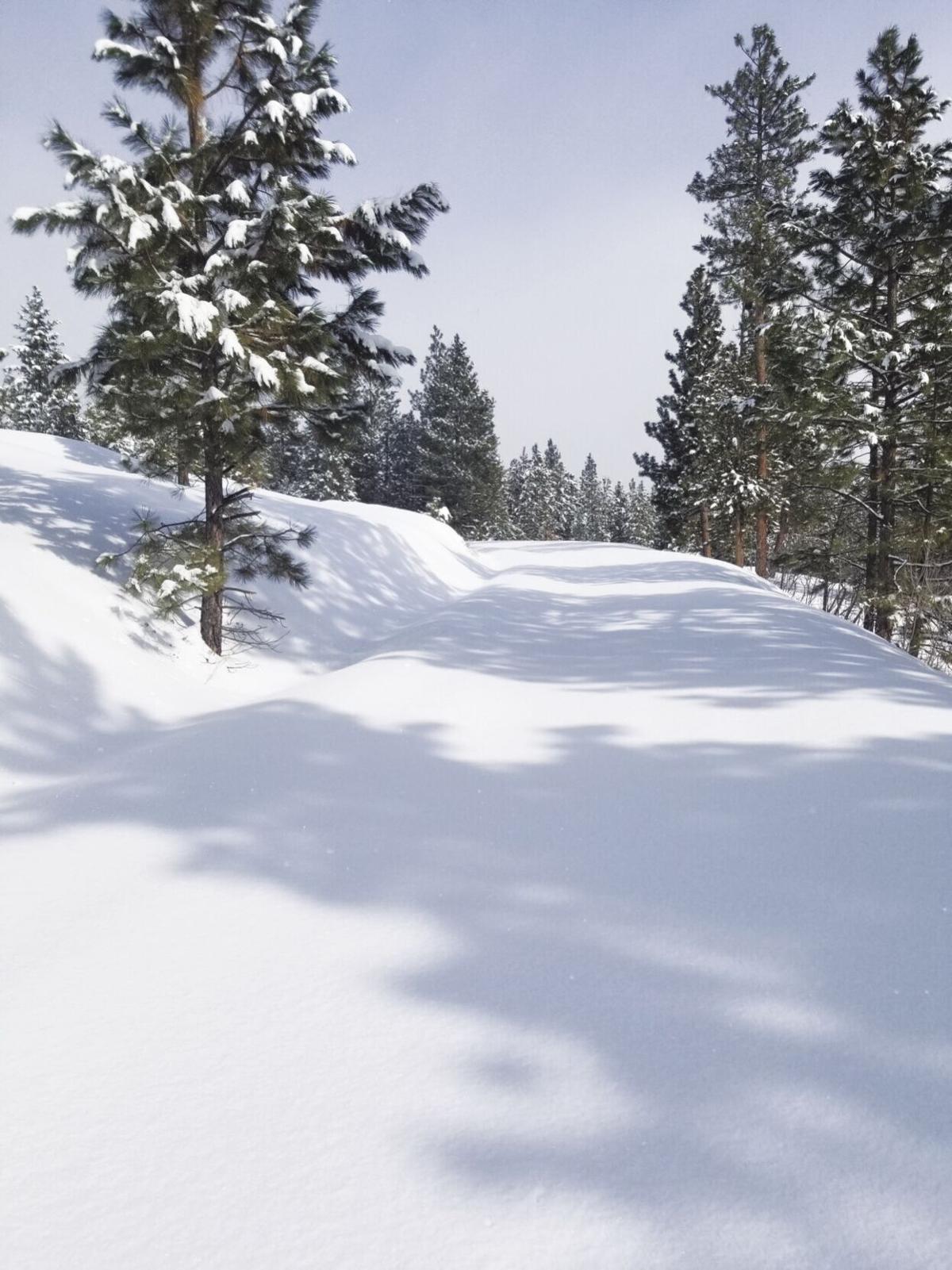 The snow was untouched along the Porcupine Road, near Pilcher Creek Reservoir, on the morning of Feb. 20. The road, which leads into the Wallowa-Whitman National Forest, is well-suited for snowshoeing. 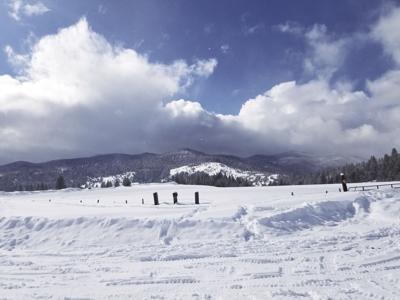 Snowshoes can’t defy gravity, but they do tinker with topography.

But only if you backtrack.

Generally I disdain the practice of retracing my steps on a hike.

It feels too much like drudgery, and hiking, it seems to me, ought never to resemble work.

I prefer instead the loop.

I like to see something new, to step on fresh ground with each stride.

But occasionally I make an exception while snowshoeing.

Sometimes it’s a matter of safety.

Even when it’s snowing and blowing, constantly resculpting and smoothing the snow surface, snowshoes generally plunge deep enough to gouge out a temporary trail that’s easy to follow back to the start so long as you head back within a few hours.

This is much more reliable than leaving a trail of bread crumbs.

You’ll recall how well that tactic worked out for a pair of siblings with rhyming first names.

The other advantage of the out-and-back snowshoe hike — and this is the one where the tinkering with topography comes into play — is that the second half is apt to be less taxing physically.

That’s sometimes the case even with snow-free hikes, to be sure.

If your route begins with a steep climb, then the return leg, when gravity is a tailwind rather than a headwind, is less apt to leave you gasping for air.

But snowshoes can pull off that trick on flat ground.

They can even make an uphill section less daunting than the downhill.

This effect, as I was reminded during a hike last Sunday, Feb. 21, near Phillips Reservoir southwest of Baker City, is especially notable when the snow is deep and soft.

The reason is simple physics.

(Well, it’s physics anyway. A subject which even in its most basic form is for me not simple but incomprehensible.)

They will “float” to an extent, at least compared with a hiker with unadorned boots, but they can’t keep you on the surface any more than a boulder can keep you from drowning.

Which is to say, snowshoeing at the end of a week in which up to 4 feet of snow fell in the mountains of Northeast Oregon will prompt your heart to beat well above its normal rate.

It’s difficult not to overdress while snowshoeing in fresh powder. Even when the temperature is well below freezing you’ll likely feel sweat beading on your forehead while the car is still in sight.

(Sweating, of course, is something you should strive to avoid during the winter, because damp clothing greatly increases your risk of hypothermia. The concept of layering — bringing multiple garments that you can doff and don as needed to keep from overheating — is rarely so valuable as it is when you’re snowshoeing.)

Once you’ve hiked as far as you’d like — or as far as you’re able, given the rapid caloric burn — you simply turn around and follow the path that, in your toil, you’ve blazed through the implacable snow.

The difference in difficulty between the outbound and the inbound legs of such a hike can scarcely be exaggerated.

And the effect has not a great deal to do with the lay of the land.

If you’ve trod across a flat meadow, the walk back will be easier because, instead of plunging a foot or so into the powder, your snowshoes will land on the much firmer snow you compressed earlier.

And if there was a downhill section on the first half of your hike, it, too, will be less taxing in reverse, even though you’re gaining elevation.

Less taxing, that is, if you take advantage of the trail.

You could of course eschew the path you created and keep plodding through untrammeled snow. This is tempting if you’re trying to maximize your workout.

But I prefer to think of the easier hike back to the car as a reward.

I also enjoy looking back at the trail I’ve made, which in deep snow resembles a very narrow bobsled run.

The day before the hike near Phillips Reservoir, my wife, Lisa, and our kids, Max and Olivia, sampled the new snow near Pilcher Creek Reservoir west of North Powder.

This is a fine place to snowshoe, especially on a clear day, as the view of the Elkhorns is exquisite.

Tucker Flat Road is plowed a short distance beyond the turnoff to the reservoir — good ice fishing there — to afford access to one of the elk-feeding sites that make up the Oregon Department of Fish and Wildlife’s Elkhorn Wildlife Area.

We parked at the end of the plowed stretch, beside an old homestead on the north side of the road.

The road, which becomes Forest Road 4330 (also known as the Porcupine Road), continues west for several miles into the Wallowa-Whitman National Forest.

I opted for a loop route under the assumption that snowmobiles would have packed down the snow on the road, making for a comparatively easy return.

A mistaken assumption, it turned out.

The Porcupine Road was unblemished, the snow as smooth as cake frosting, but with a consistency closer to powdered sugar.

Even though there was a slight downhill grade for the last half mile or so back to the rig, that section was every bit as challenging, physically, as our first uphill strides.

I didn’t make the same mistake the next day.

To get there, exit Interstate 84 at North Powder and drive west on River Lane for about 7.9 miles. Just before entering the Elkhorn Wildlife Area, turn right, uphill, onto Tucker Flat Road. The road is plowed for about 2.5 miles, ending near a homestead on the north side of road. The road continues west for about a third of a mile, then takes a sharp left turn. The road continues into the Wallowa-Whitman National Forest.

While you’re in the area, check out the Elkhorn Wildlife Area, where the Oregon Department of Fish and Wildlife feeds alfalfa hay to elk to keep them from marauding ranchers’ haystacks in the valley below. At the junction where the Tucker Flat Road starts, drive west a short distance to the kiosk on the left side of the road. There’s ample parking here, and an outhouse.

Most days there’s a herd of more than 100 Rocky Mountain elk in the meadow below along the North Fork of Anthony Creek. The Wildlife Area crew doles out hay from the barn beside the creek. You can see the trails the elk have made in the snow between the meadow and the forest beyond.