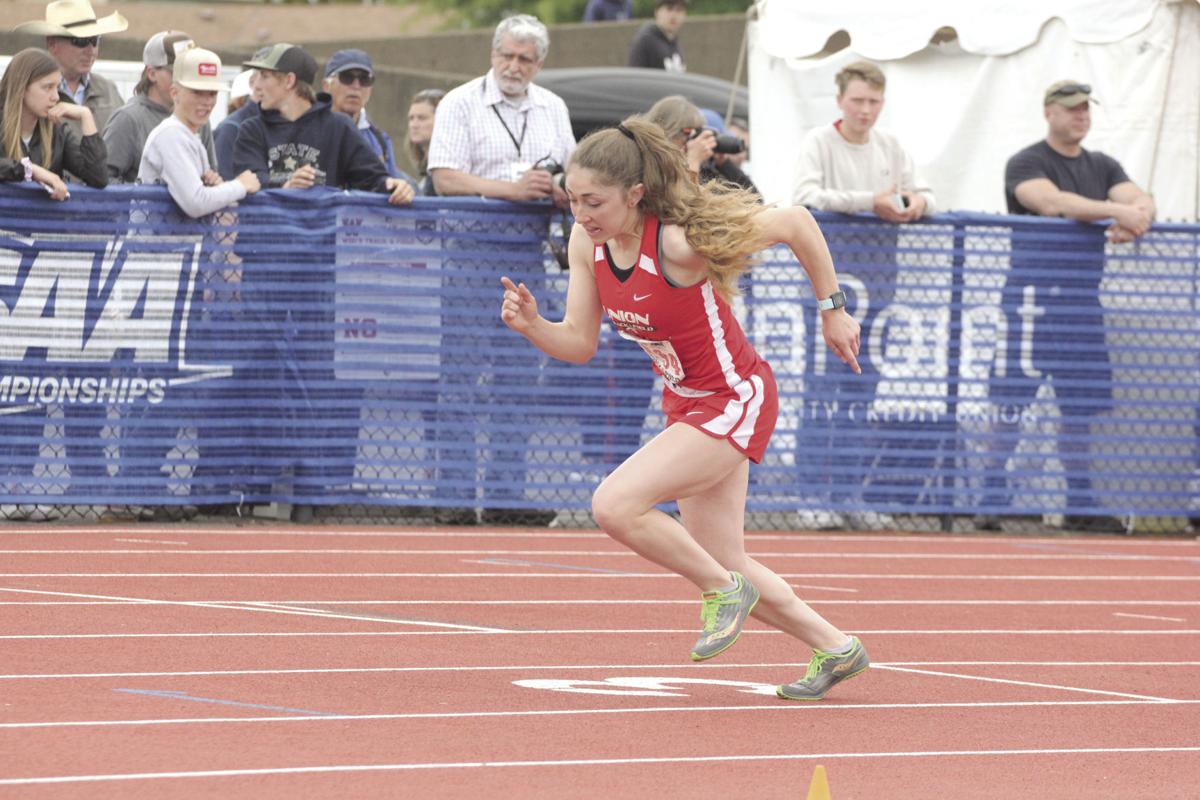 Union senior Jaimee Baxter, shown last May at the state track meet in Monmouth, has signed to compete in track and cross-country for Eastern Oregon University. 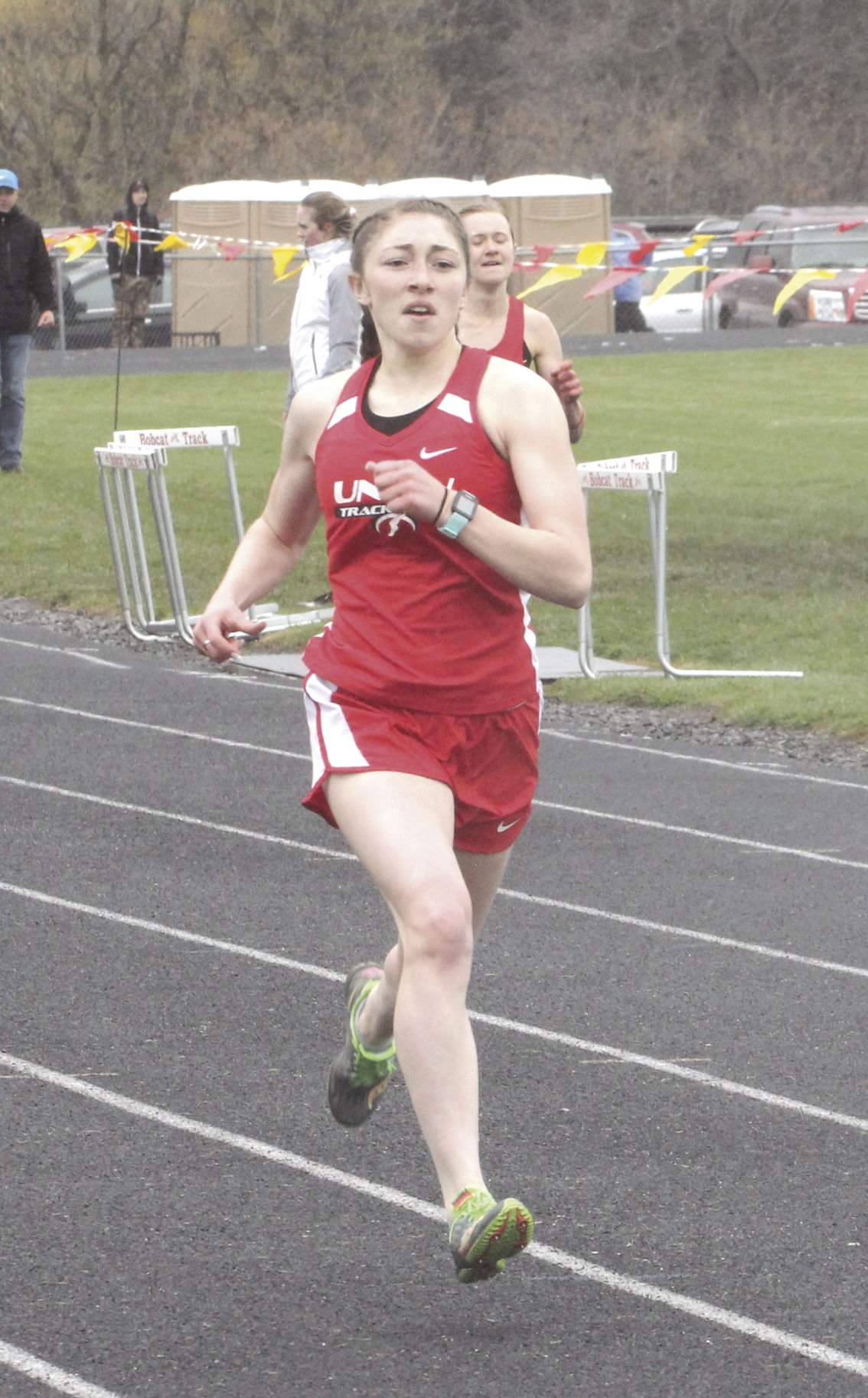 Union senior Jaimee Baxter, shown last April at the Pepsi Invitational in Union, has signed to compete in track and cross country for Eastern Oregon University.

Union senior Jaimee Baxter, shown last May at the state track meet in Monmouth, has signed to compete in track and cross-country for Eastern Oregon University.

Union senior Jaimee Baxter, shown last April at the Pepsi Invitational in Union, has signed to compete in track and cross country for Eastern Oregon University.

UNION — Jaimee Baxter has witnessed the growth in the Eastern Oregon University track and cross-country programs, and wants to be in the mix.

That, the Union senior said, was a big part of what played into her decision to sign with EOU to join the programs, which she will do this fall.

“I’ve been able to watch over the last few years and watch the team grow,” she said. “I want to be part of the success. I’m confident that they’ll get the best out of me.”

Baxter, who also considered Idaho State and College of Idaho before selecting EOU, has become an integral part of the running program at Union during her career. Three times she placed in the top 16 at state in cross-country, culminating last fall in a sixth-place finish at the 3A/2A/1A meet in a time of 19:32.3. That race capped a season where she logged eight top 10-finishes.

She also has emerged as a solid middle-distance runner on the track, and wrapped up her junior year last spring with a third-place finish in the 400-meter run at the 2A state meet, posting a time of 59.48 seconds. That capped a theme in the race for Baxter, who finished in at least the top three all nine times she ran the race in 2019, including four victories.

Baxter also will get to link back up with former teammates, including Michelle Herbes, who she said she trained with a lot during high school.

“We pretty much competed in most of the same events. We push each other really hard,” Baxter said. “She’s a stud. I am very excited to compete with her this year.

“I know she is going to kill me this summer in training, but I’m looking forward to it.”

Baxter had high hopes for the 400 this spring, including aiming for the Union program record in the race — a mark held by a relative — before the season was canceled due to COVID-19.

“My goal was to break Linda Baxter’s (record),” she said, noting the mark is 58.4 seconds, which she was only a second behind at state. “I’ll still have that mindset for next year. I was looking forward to that, but it is what it is, and that’s alright.”

The 400, in fact, has become a favorite race for Baxter.

“That’s become a race I really love,” she said. “It hurts a lot. Last year I had a lot of fun with it. I’ve made a lot of progress and getting faster, getting more knowledge.

“There’s a lot more that went into it than what I thought. It’s a fun race because it’s fast, but it’s strenuous. It’s kid of a gutsy race.”

She also ran on state-placing 4x400 relay teams as both a freshman and sophomore for Union, and placed fifth in the state in the 1,500 as a sophomore.

“I think she’s going to be a solid middle distance runner,” EOU head coach Ben Welch said. “I like the athletes who can run cross well but have that kind of speed on the track.”

Welch sees Baxter as an athlete who will run in the relay and in the 400, among other races, and who could immediately make an impact on the cross-country team.

“She’s already run fast enough in cross to put her in the mix with our top seven. Hopefully she’ll continue to improve on that, and I think she will with her attitude,” he said.

Baxter pointed to coaches Steve Sheehy and Phillip O’Reilly, as well as a family history in the sport, as what hooked her to the sport.

“The connection with them and my family really drew me in,” she said.

She added the sports have helped shape who she is today.

“In one way, the coaches, the coaches staff at Union is incredible,” she said. “They helped me not only to push myself to achieve goals and meet goals, but the have helped me develop as a person. Just watching them in their families and communities, they are people I aspire to be like.”

Baxter plans to study exercise science with a focus in physical therapy, saying she has found a passion for the health field, which was fueled partly by Future Health Care Professionals of Oregon.

“A couple years back I went to MedQuest,” she added, also attributing the week-long session at EOU for inspiring her. “I loved it. That’s when I really started to look more into a health career.”