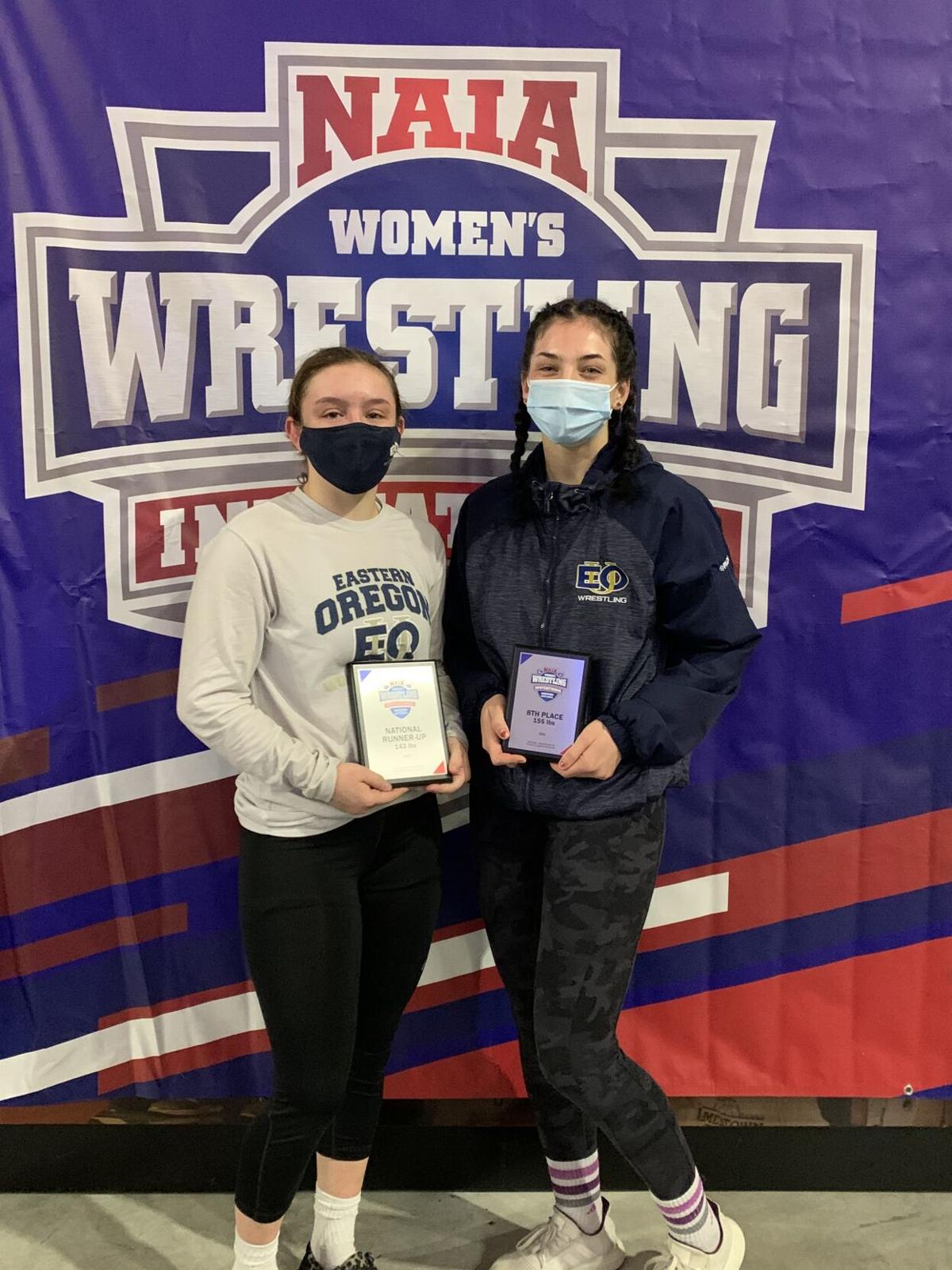 The conference in an announcement Thursday, March 18, reported her fellow head women’s wrestling coaches in the conference voted for her to receive the honor.

The head coach was surprised — she said she didn’t even know she was nominated for the award.

The award came less than a week after Sluberski wrapped up her first year as the program’s head coach and less than a week after she led nine of her players to North Dakota to compete in the National Association of Intercollegiate Athletics Women’s Wrestling National Invitational, where wrestler Erin Redford finished as the national runner-up at 143 pounds, posting a 4-1 record over the two-day tournament. EOU teammate Dempsi Talkington posted an eighth-place finish at 155 pounds.

Sluberski took on the position of head coach for the women’s wrestling team back in November 2020 — the third person to hold the title. Women’s wrestling at EOU is relatively new. The program started in 2016 after the university received $300,000 from the state, along with $200,000 from private donations, to reinstate a men’s team and establish a women’s team.

“It’s definitely not traditional,” said Sluberski about the sports’ niche status, “but it’s up and coming.”

Nationwide, Oregon is one of 28 states that have state-sanctioned championships for women’s wrestling.

New York, Sluberski’s home state, isn’t one of them. That fact didn’t deter Sluberski’s passion for the sport.

“I’m from New York, so I wrestled in New York, and I wrestled on the boys’ team,” she said. “They still don’t sanction it in New York — I’m 11 years removed from high school, and they’re still behind.”

Sluberski grappled most of her life, starting in elementary school and throughout college, winning four individual Canadian Interuniversity Sport titles before becoming a head coach at Providence University in Montana. After taking the position at EOU, she tackled a new problem — leading the team during a pandemic.

“When you have the opportunity to compete taken away from you,” Sluberski said, “it makes it that much more special when you get to go.”

Out of the 13 players that make up the women’s wrestling team at EOU, Redford, Talkington and seven of their teammates — Anjelynn Baron, Krystal Fabricante, Nayeli Flores Roque, Macy Higa, Nayeli Maston, Lisa Megargee and Olivia Robinson — received invites to the NAIA.

“It was a great event, and it was really exciting that we got the opportunity,” said the head coach about the invitational in Jamestown, North Dakota. “I mean, all year, it’s been kind of like, ‘Oh, are we going to be able to do it, are we not?’”

Redford crushed the first day of the competition, scoring a 3-0 lead. In her first match, she pinned Julia Mata of Missouri Valley in 23 seconds. She followed up with two more pins, against Emma Walker of Campbellsville and Akina Yamada of Waldorf, securing her place in the semifinals the following day.

In the semifinals, Redford pulled out a sudden victory, 3-2, over Sydney Freund of Oklahoma City to punch her ticket to the championship match. In the final match of the season, Redford battled from start to finish before falling 4-3 to Waipuilani Estrella-Beauchamp of Midland.

Talkington posted a 3-3 record in two days for the Mountaineers. She fell in her first match before bouncing back to win her next three matches to end the day at 3-1. Talkington closed her tournament run with a loss in the seventh-place match.

In the end, the EOU women’s wrestling team scored 35.5 points at the invitational and placed 17th overall in the two-day competition.

For now, Sluberski said she was happy the girls were competing again.

“I think it’s been a big year for growth,” she said. “We have a smaller team and they have quite a bit of talent. There’s a lot of good things that could happen.”