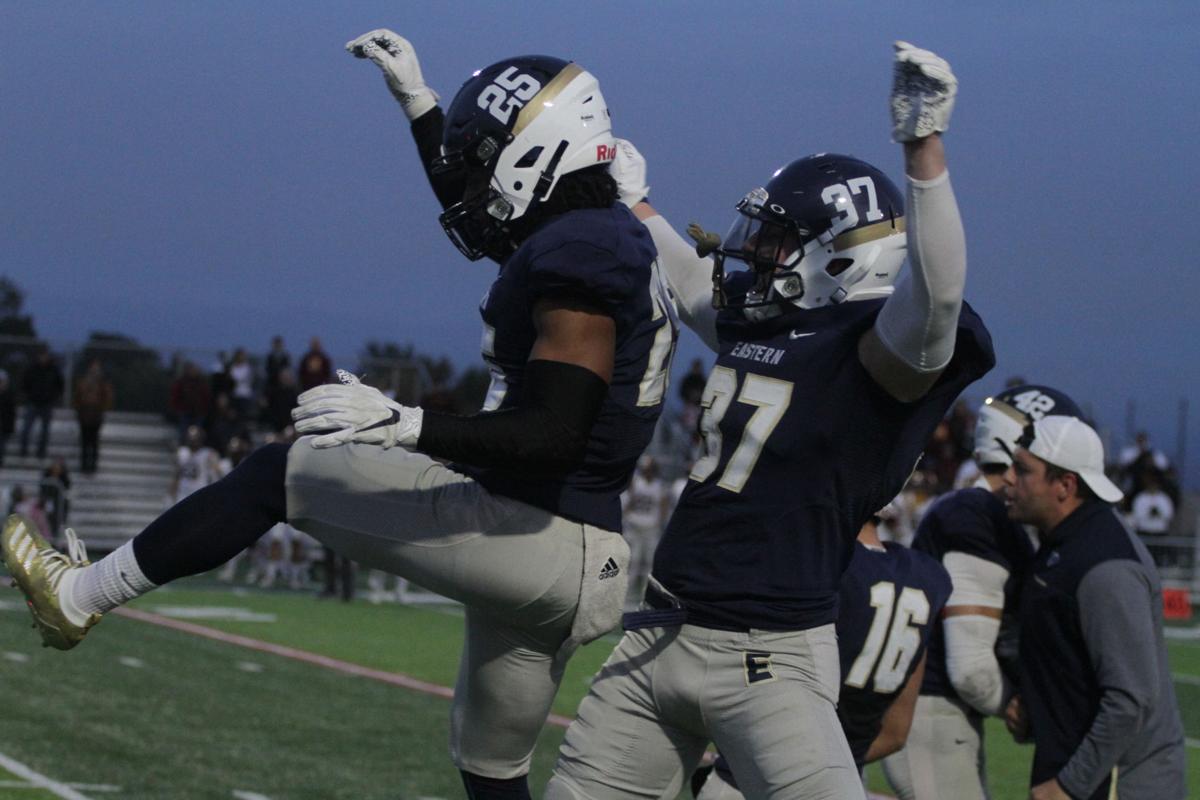 Eastern Oregon celebrates after getting a stop on fourth down at the goal line during the first quarter of Saturday' game against MSU-Northern. 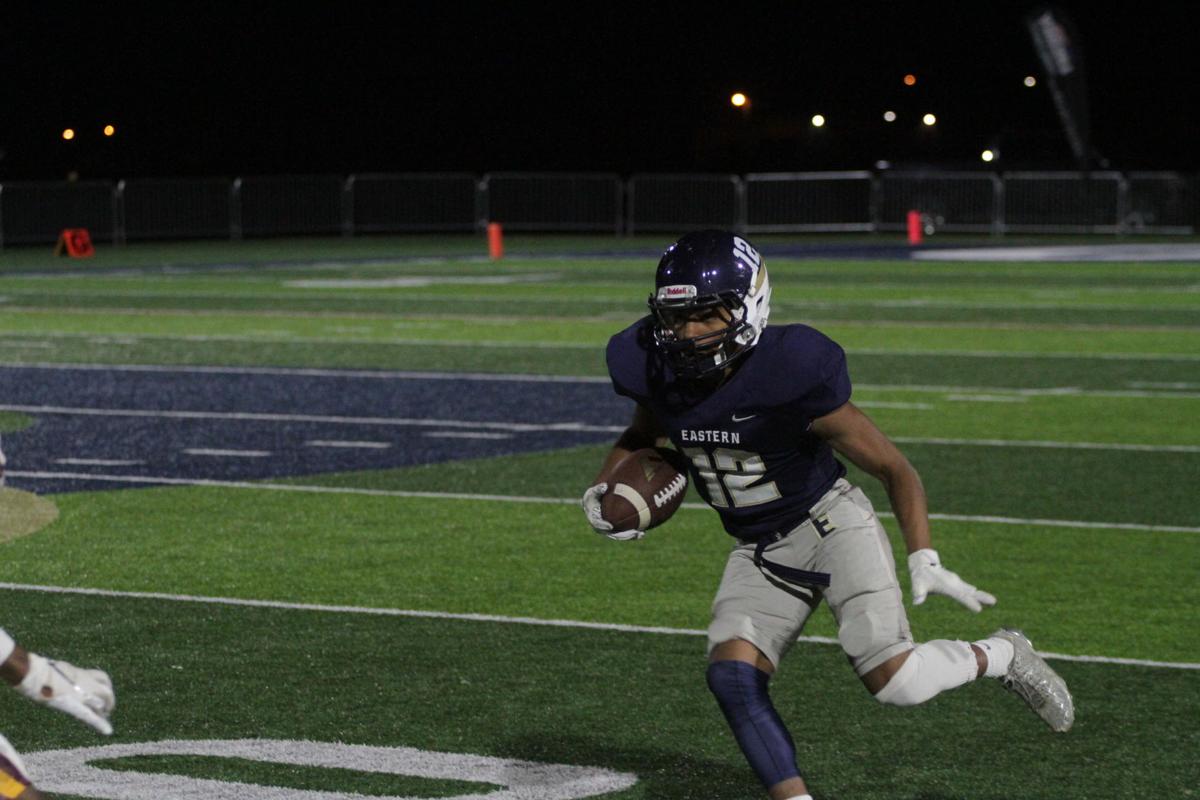 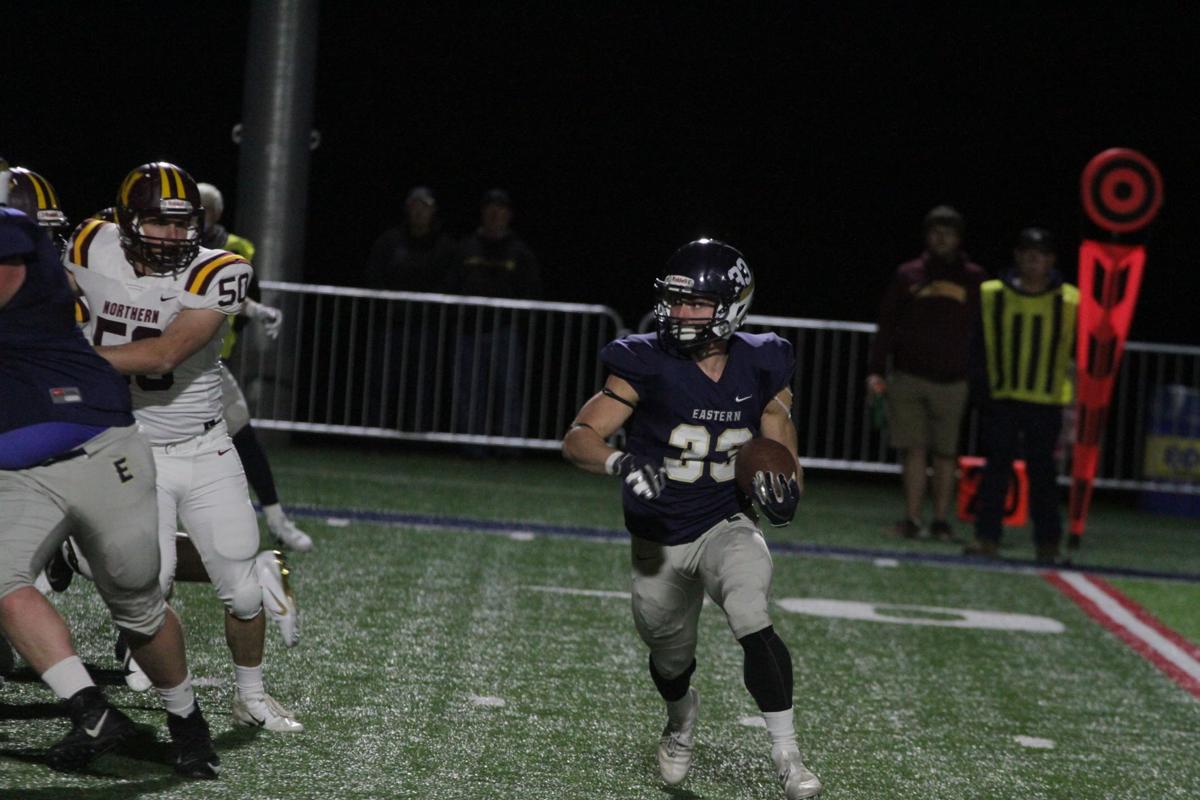 EOU's Kaler Moore looks for the corner on his touchdown run during the second quarter of the Mountaineers' 45-7 win over MSU-Northern. 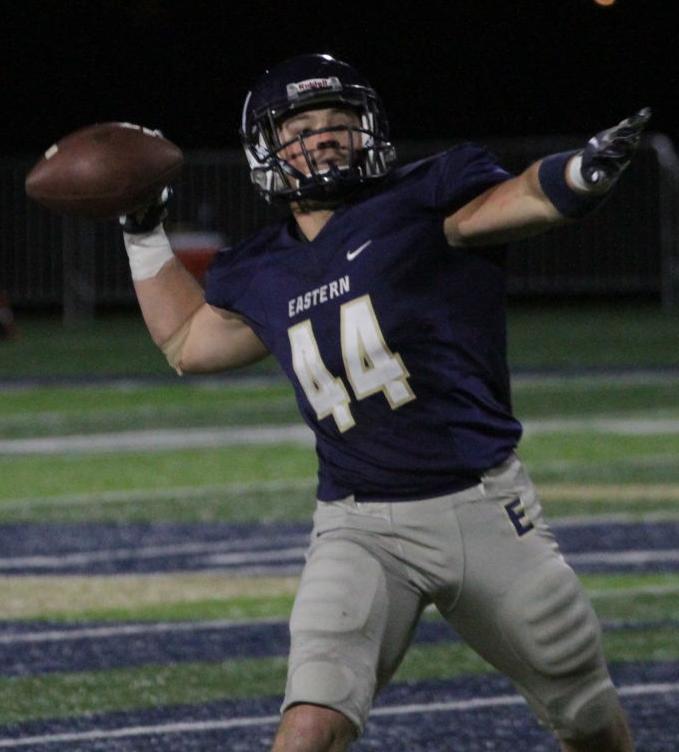 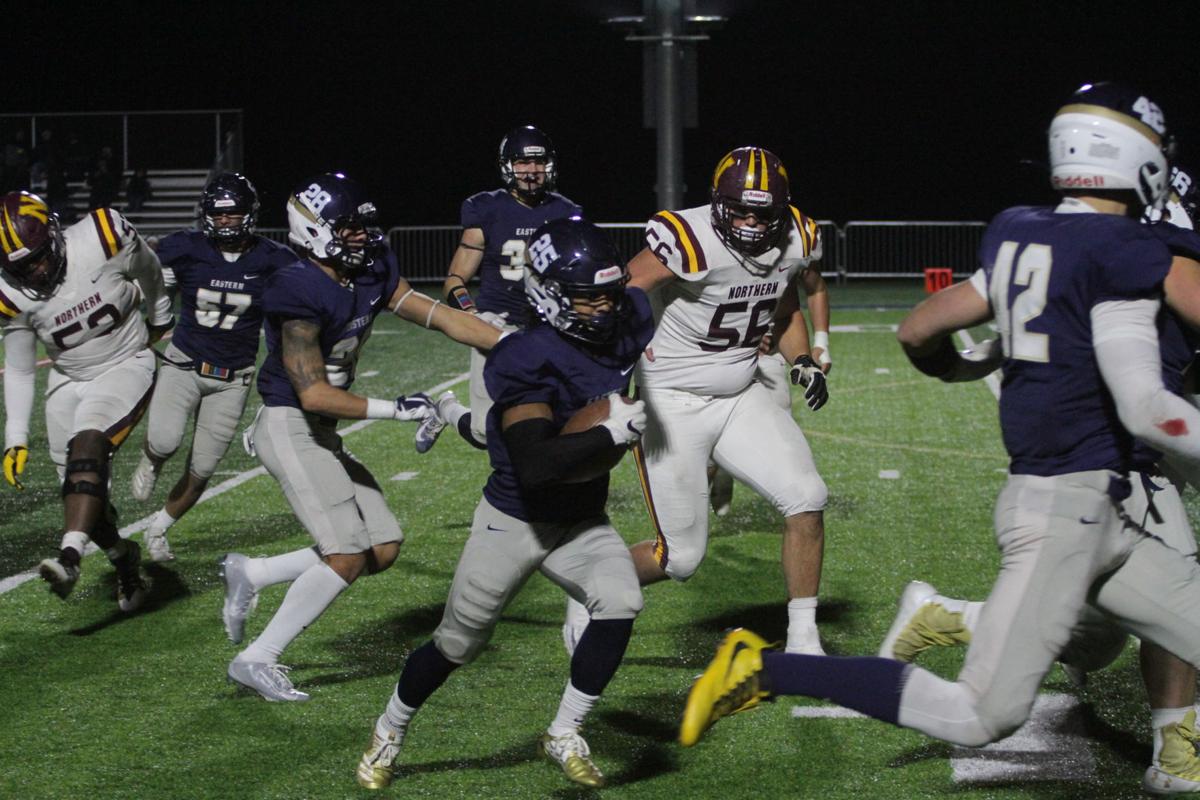 Eric Prom (25) returns an interception for a touchdown in Eastern Oregon’s win over MSU-Northern Saturday. 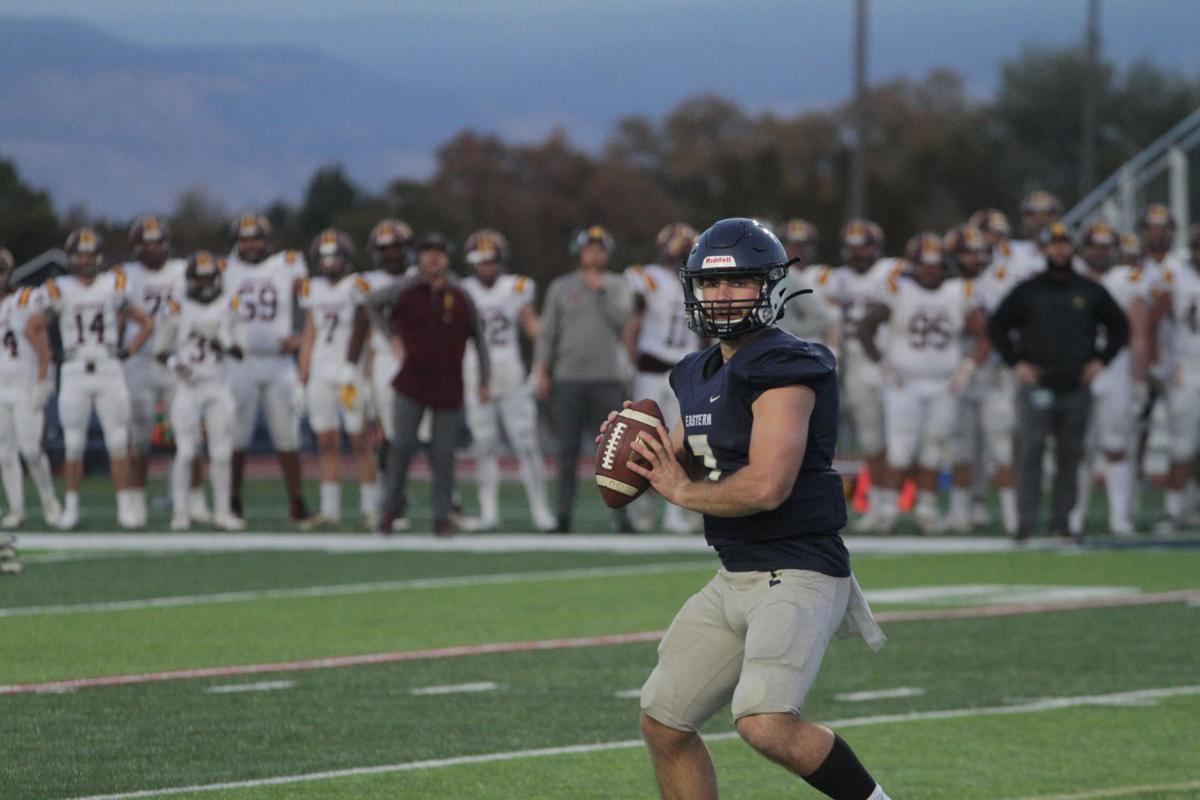 Eastern Oregon celebrates after getting a stop on fourth down at the goal line during the first quarter of Saturday' game against MSU-Northern.

EOU's Kaler Moore looks for the corner on his touchdown run during the second quarter of the Mountaineers' 45-7 win over MSU-Northern.

Eric Prom (25) returns an interception for a touchdown in Eastern Oregon’s win over MSU-Northern Saturday.

The defense set the tone with a fumble recovery on the first play of the game. The offense was improved.

EOU scored the game’s first 24 points, finished with more than 500 yards of offense and forced five turnovers in a 45-7 trouncing of Montana State Northern Saturday night in Frontier Conference play at Community Stadium.

“We definitely stepped it up from what we’ve been doing,” said linebacker Gunnar Blix, who had eight tackles and 1.5 sacks. “Our secondary and run stopping has kind of been not all there, but today was a step in the right direction in stopping the run and shutting down the pass.”

Derrick Fontenot recovered a fumble for EOU on the Lights’ first carry of the game, and Victor Dias punched in the first of his two touchdowns from a yard out for a quick 7-0 lead.

But the main momentum shift came later in the quarter. MSUN drove inside the Eastern 5-yard line and appeared poised to even the game.

The Eastern defensive line, though, stopped Lights’ running back Cameron Taylor short of the goal line on fourth down, and EOU followed with an impressive 99-yard drive — one that saw it convert three third downs — and finished it with a 13-yard touchdown reception by Conner Falk for a two-touchdown lead.

It was all Eastern from that point. The Mountaineers did mostly whatever they wanted — as they should have against MSUN, which lost its 32nd straight conference contest.

The defensive backs, meanwhile, blanked the Northern receivers, grabbing three interceptions — one taken back by Eric Prom for a 38-yard touchdown and a 38-7 lead late in the third quarter — and breaking up several other passes. Haziel Ledezma and Zack Jacobs collected the other picks.

“We just tried to make plays where the coaches put us in position,” Prom said, adding the secondary focused on receivers Damari Cual-Davis and Marvin Williams Jr. “We definitely keyed in those two guys. We knew (the Lights) wanted to get them the ball. We just had to be ready continuously.”

Cual-Davis did finish with 114 yards receiving and the lone Lights’ touchdown, but Williams Jr. was shut out.

The offense was stronger up front, and the running game matched the physicality of its offensive line. EOU amassed 222 rushing yards. Kai Quinn led the way with 113 yards and Dias added 76, both dishing out punishment in the ground game. It was perhaps no more evident than when Quinn lowered a shoulder and ran over a Lights’ defender at the end of a 14-yard run early in the second quarter.

“We really executed,” Dias said. “Much sharper up front. A big thanks to those guys. That unit up front has worked so hard in these last two weeks with our bye week and our game prep week. Honestly, what they put on film, we’re going to be happy with. They battled up front.”

EOU head coach Tim Camp said he shook up the lineup in a few areas Saturday, including on the offensive line, and got a good effort from center Everett Willard.

“I started a freshman center who is going to be freaking awesome,” Camp said. “He went in there and he held the inside down. He is going to be a stud.”

Quinn was also sharper in the passing game, completing 24 of 34 passes for 257 yards with a touchdown and two picks. He had completed just 45% percent of his passes coming into the game, but Saturday connected with 10 different receivers.

EOU called more plays called in the short passing game, which proved to be effective.

“That’s the biggest thing with Kai,” Camp said. “Take what they give you. If it’s open underneath, let’s throw the underneath stuff.”

Tanner Zenke led the way with five catches, and Isaiah Thomas had 80 yards. Phoenix Millhollen added 50 yards receiving, 34 of which came from Dias on a halfback pass for a touchdown that pushed the lead to 31-7 just moments before Prom’s pick-six.