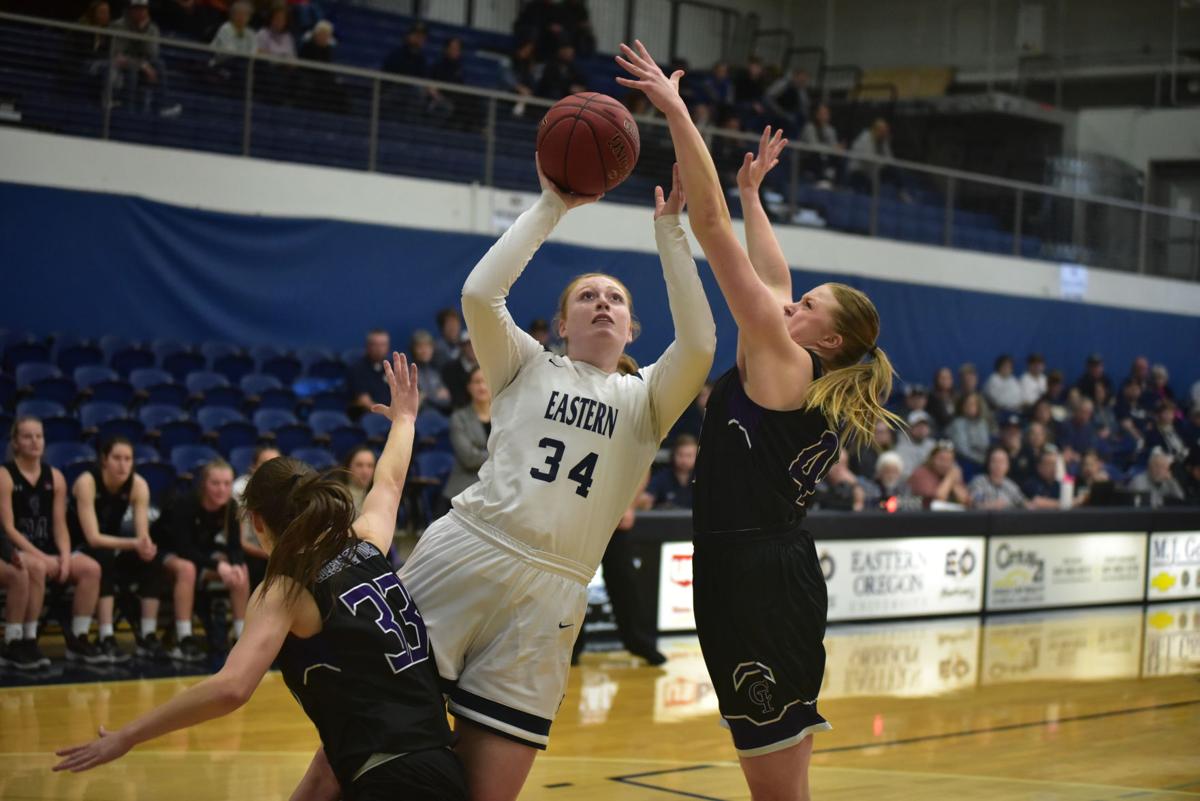 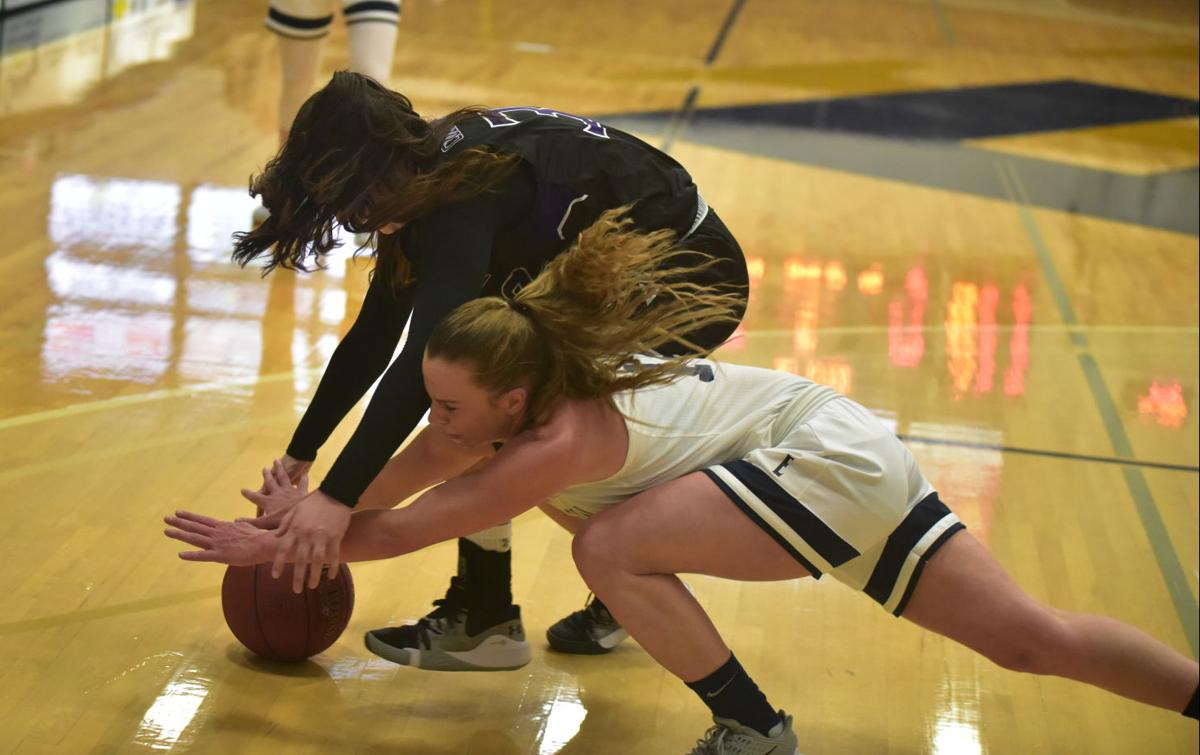 Eastern Oregon's Emma Logan and College of Idaho's Allie Cannon dive for a loose ball Tuesday in the CCC quarterfinals. 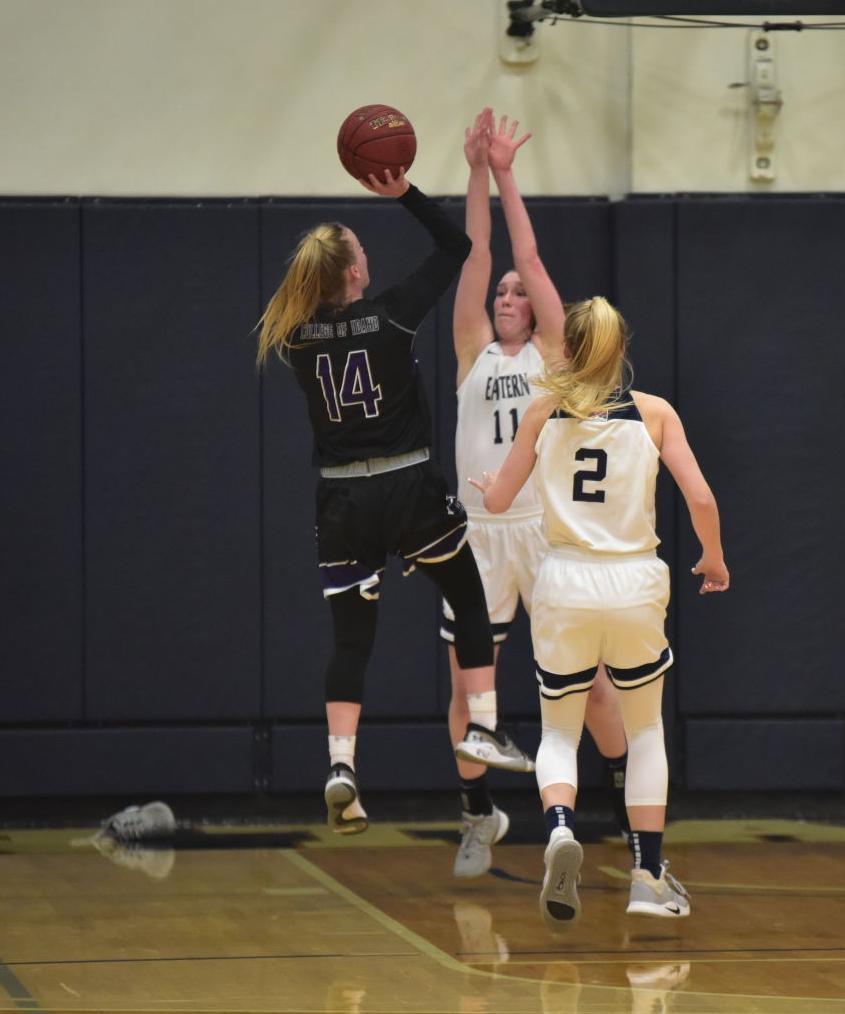 Eastern Oregon's Taylor Stricklin (11) defends a shot by College of Idaho's Mackenzie Royce-Radford Tuesday despite losing a shoe during the CCC quarterfinals. 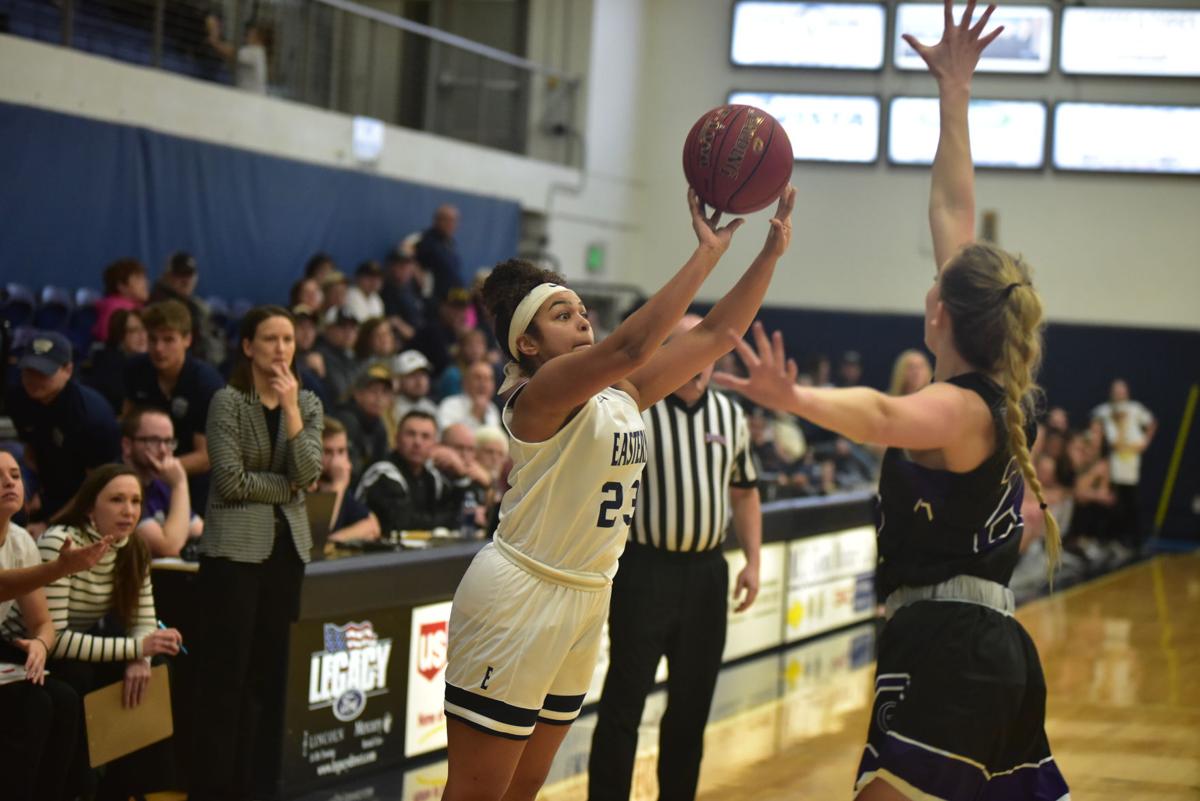 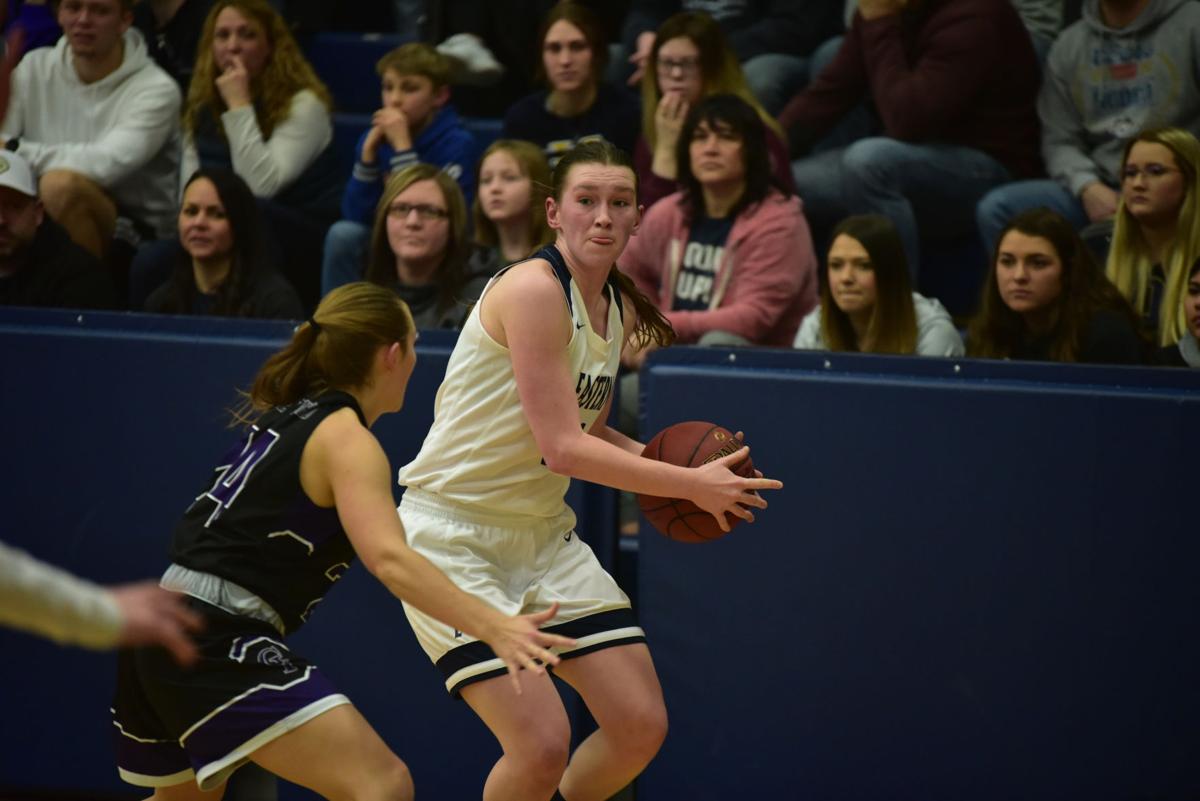 Eastern Oregon's Taylor Stricklin, who led the Mountaineers Tuesday against College of Idaho with 15 points, looks for an open teammate. 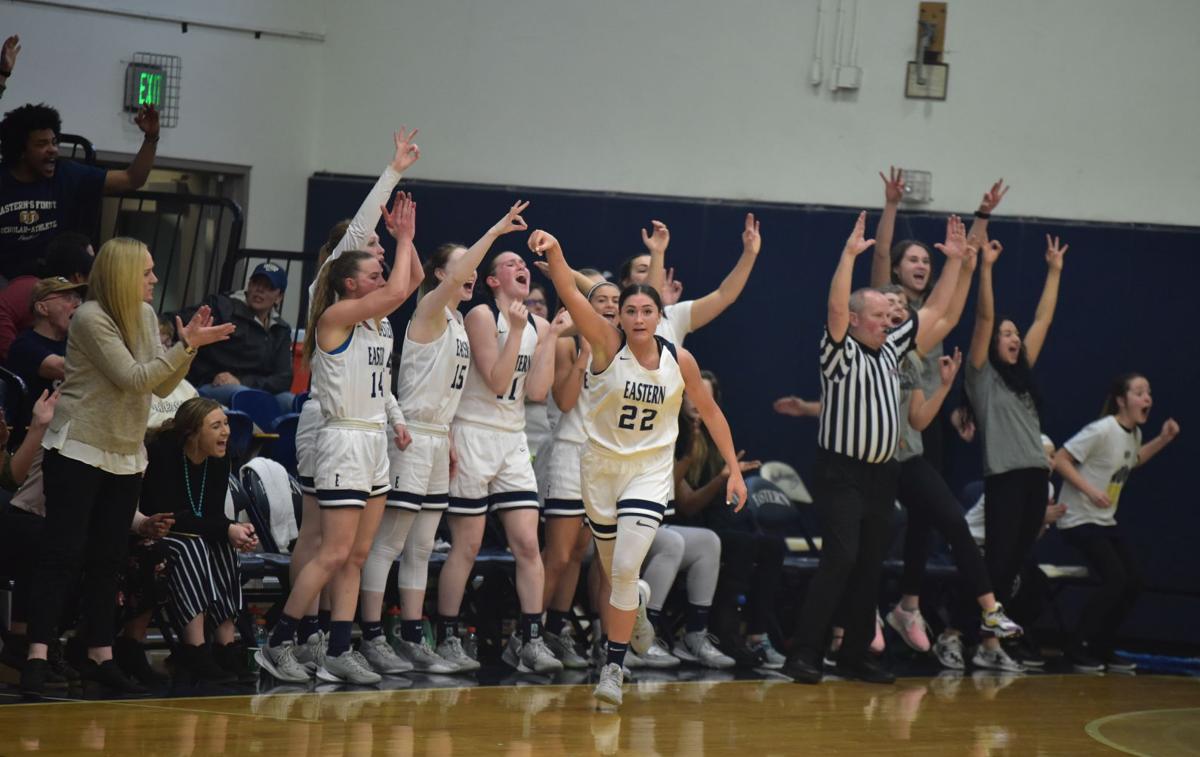 The Eastern Oregon bench celebrates after Jane Nelson (22) hits a 3-pointer Tuesday in the fourth quarter against College of Idaho. 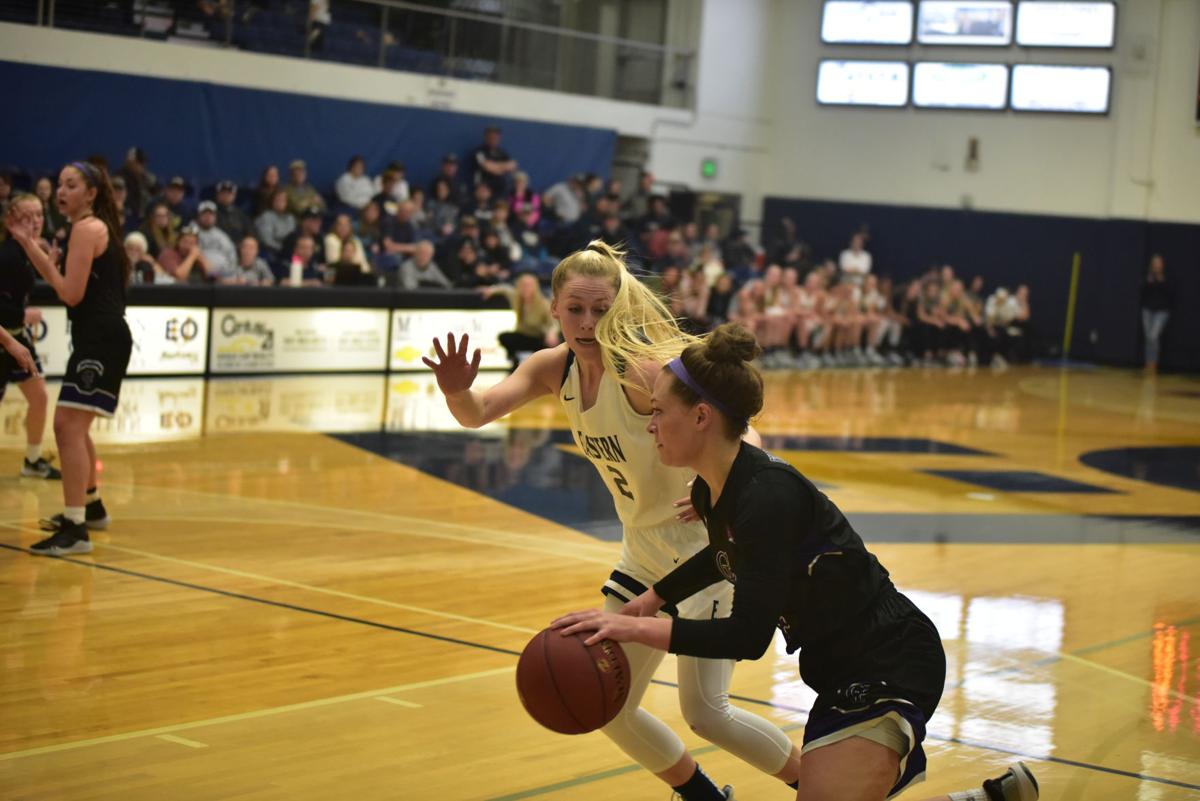 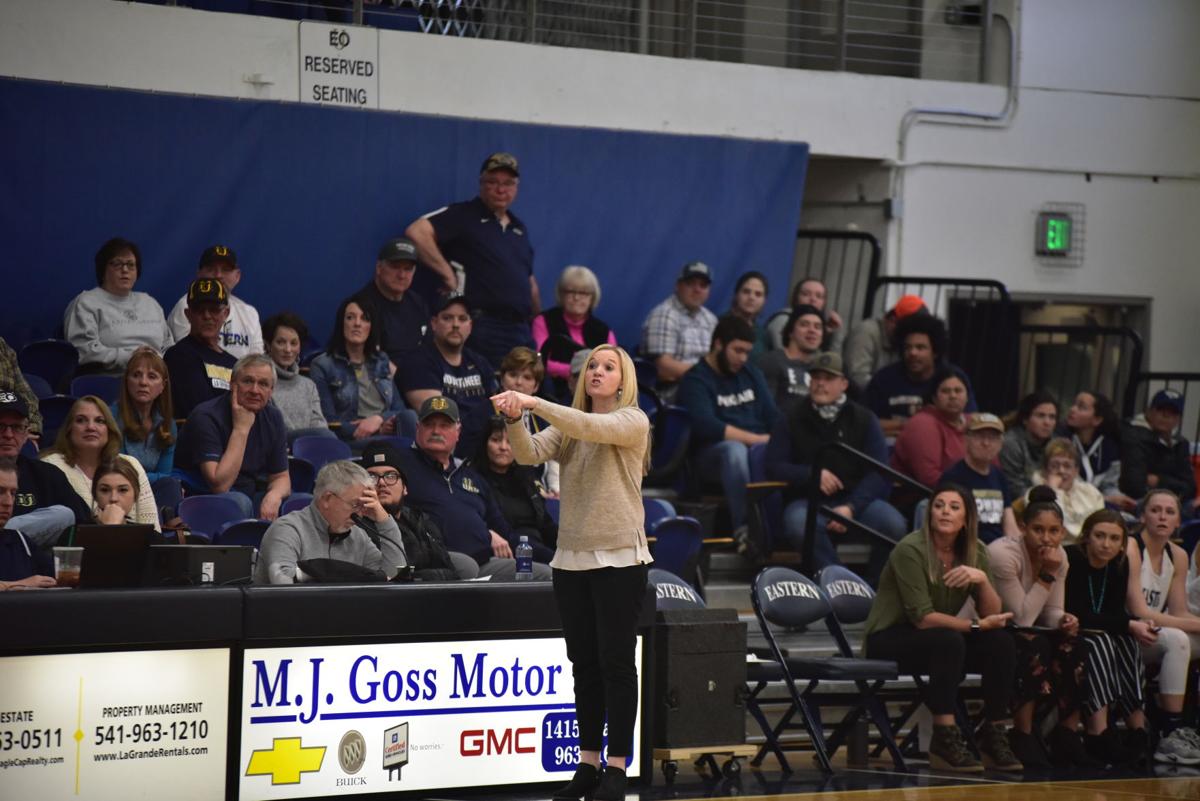 Eastern Oregon head coach Anji Weissenfluh gives out instruction to her team in Tuesday's game against College of Idaho. 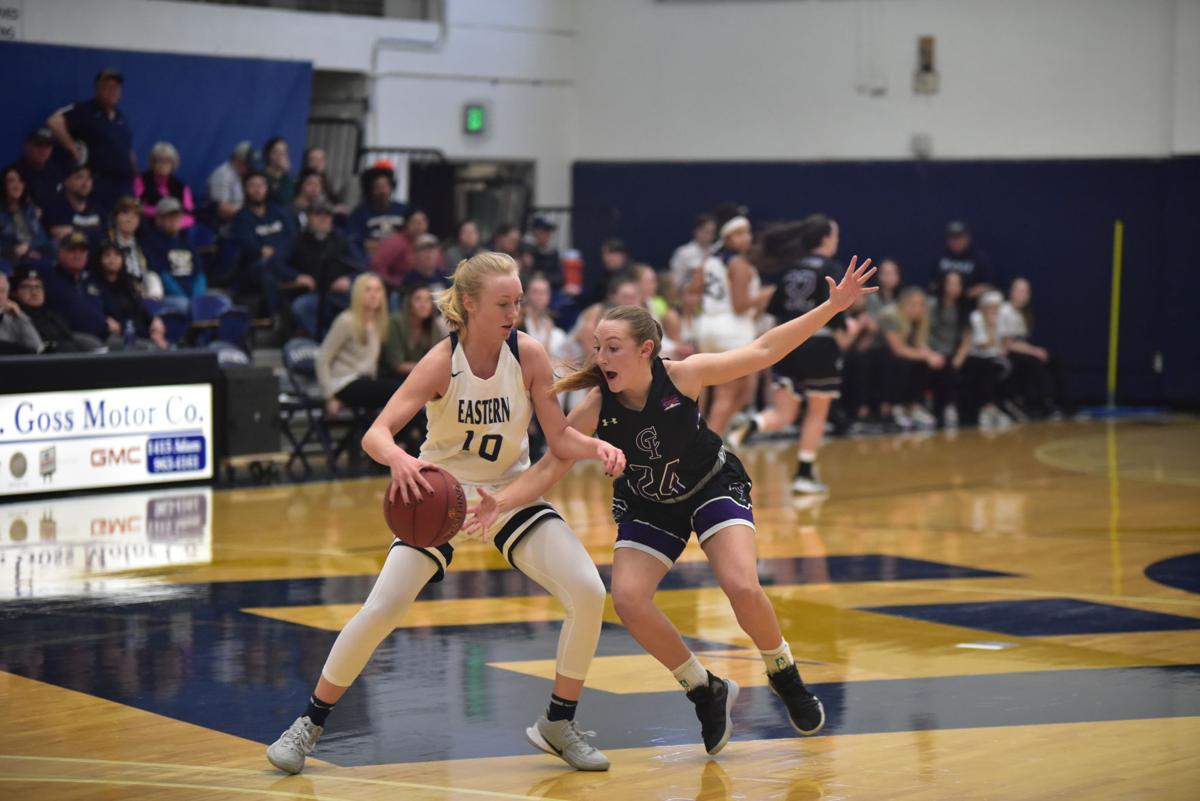 Eastern Oregon's Emma Logan and College of Idaho's Allie Cannon dive for a loose ball Tuesday in the CCC quarterfinals.

Eastern Oregon's Taylor Stricklin (11) defends a shot by College of Idaho's Mackenzie Royce-Radford Tuesday despite losing a shoe during the CCC quarterfinals.

Eastern Oregon's Taylor Stricklin, who led the Mountaineers Tuesday against College of Idaho with 15 points, looks for an open teammate.

The Eastern Oregon bench celebrates after Jane Nelson (22) hits a 3-pointer Tuesday in the fourth quarter against College of Idaho.

Eastern Oregon head coach Anji Weissenfluh gives out instruction to her team in Tuesday's game against College of Idaho.

LA GRANDE — A key run spanning the end of the third and the start of the fourth quarter Tuesday and timely plays on both offense and defense — often by the same player — boosted the Eastern Oregon University women’s basketball team back to the semifinals of the Cascade Collegiate Conference tournament.

Taylor Stricklin led the way with 15 points, Jane Nelson had seven of her 14 during a game-changing 11-0 EOU run, and the Mountaineers topped rival College of Idaho 62-48 at home in the CCC quarterfinals to move one step closer to a potential NAIA national tournament berth.

“It’s C of I. I always give C of I respect,” Eastern head coach Anji Weissenfluh said. “They always play hard, and it's a rival game. They came out, they played hard, they played quick, they played physical, and we just had to grind it out.”

The visiting Yotes never led in the second half but twice got as close as one point in the third quarter, the last at 39-38 on a Mackenzie Royce-Radford layup.

Nelson countered with an off-balance jumper just over 90 seconds later to start the game-breaking run, and Emma Logan followed with a layup for a 43-38 lead after three quarters.

Nelson then opened the fourth with a jumper in the key and a 3-pointer around a baseline jumper from Jill Albright that gave Eastern a 50-38 lead, at the time its largest of the night.

“This team always comes out and plays us tough,” Nelson said. “They’re always physical with us and they always rebound really hard. It was good that we stepped up. We knew what we needed to do.”

The run was enough to hold off a scrappy Yotes’ squad that never went away and in fact led much of the first half. C of I did make a final push to get within 52-46 after Hannah Maupin’s tough bucket on the block and a slick step-through for a layup from Royce-Radford, but Nelson’s basket and Madison Crews’ 3-pointer with about 2:40 to play put the game away.

“At this time of year you gotta make plays,” Weissenfluh said. “They kept on coming back, they wouldn’t get too far (away). They got back within six, I called a timeout, and we responded and got back in up by 10 in the next two possessions.”

The Yotes led by as much as five in the opening quarter before a 6-0 EOU run put the Mountaineers ahead 13-12 after one.

Eastern took the lead for good midway through the second on a 3-point play by Stricklin, who then followed just over three minutes later with a quick catch-and-shoot 3-pointer for a 23-19 edge, which EOU built to 26-21 at the half.

In between her 3-point play and 3-pointer, Stricklin had one of the more entertaining plays of the night. She stayed back after grabbing a rebound to retie a shoe she lost during the possession. EOU turned the ball over, so Stricklin tossed the shoe aside, blocked a shot on the C of I fast break by Royce-Redford and forced a loose-ball foul on the Yotes.

“Taylor played well throughout the entire game,” Weissenfluh said. “She hit some shots, she defended, she rebounded, she played on one foot getting a block when we needed it — it was good.”

EOU grabbed its largest lead of the third quarter at the 6:56 mark when Kylie Smith, who scored all seven of her points in the first 3:04 of the third, blocked a shot on the defensive end, then seconds later canned a 3-pointer from the top of the key for a 35-27 advantage.

“What’s really unique about our team is we have so many good players that we don't have just one go-to, and I think that makes us really tough to guard,” Stricklin said. “It can be anybody’s game, anybody’s night.”

Nelson noted that was a theme for the evening.

“Every play of the game, somebody stepped up and did something,” she said. “Kylie had a good block, Madi had a good pass, Taylor had a steal. There were good rebounds. Everybody’s doing everything they can to contribute.”

The Yotes scored the next six points to get within two, then whittled the deficit down even more before Eastern finally seized control.

Up next for the Mountaineers (22-9 overall) is another rivalry game, as Southern Oregon makes the trip to La Grande Friday for the CCC semifinals. The winner of the contest will receive the CCC’s second automatic bid to the national tournament if regular-season champion Northwest Christian defeats Corban in Friday’s other semifinal. If Corban wins, it will travel to the EOU-SOU winner Monday night for the CCC title game and the auto bid.

EOU routed SOU in both regular-season contests, winning by 23 in Ashland and 22 in La Grande, but both Weissenfluh and Stricklin said what happened in the regular season doesn’t matter at this point.