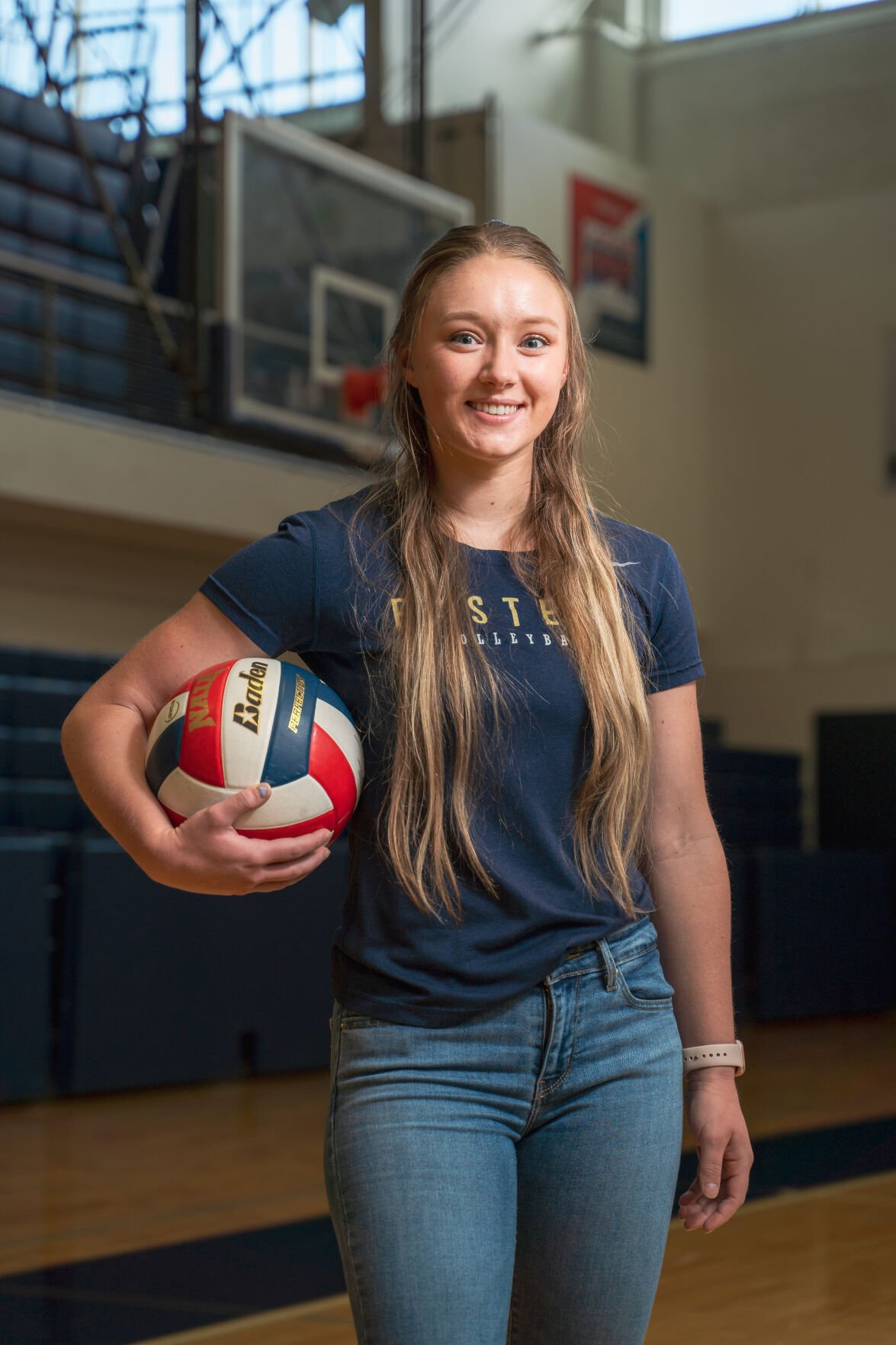 Kiley McMurtrey stands in Quinn Coliseum at Eastern Oregon University, just weeks before she is set to move to Utah to begin her post-graduate career and a spot on the Utes volleyball team. The NAIA All-American is the all-time career leader in digs and service aces at EOU. 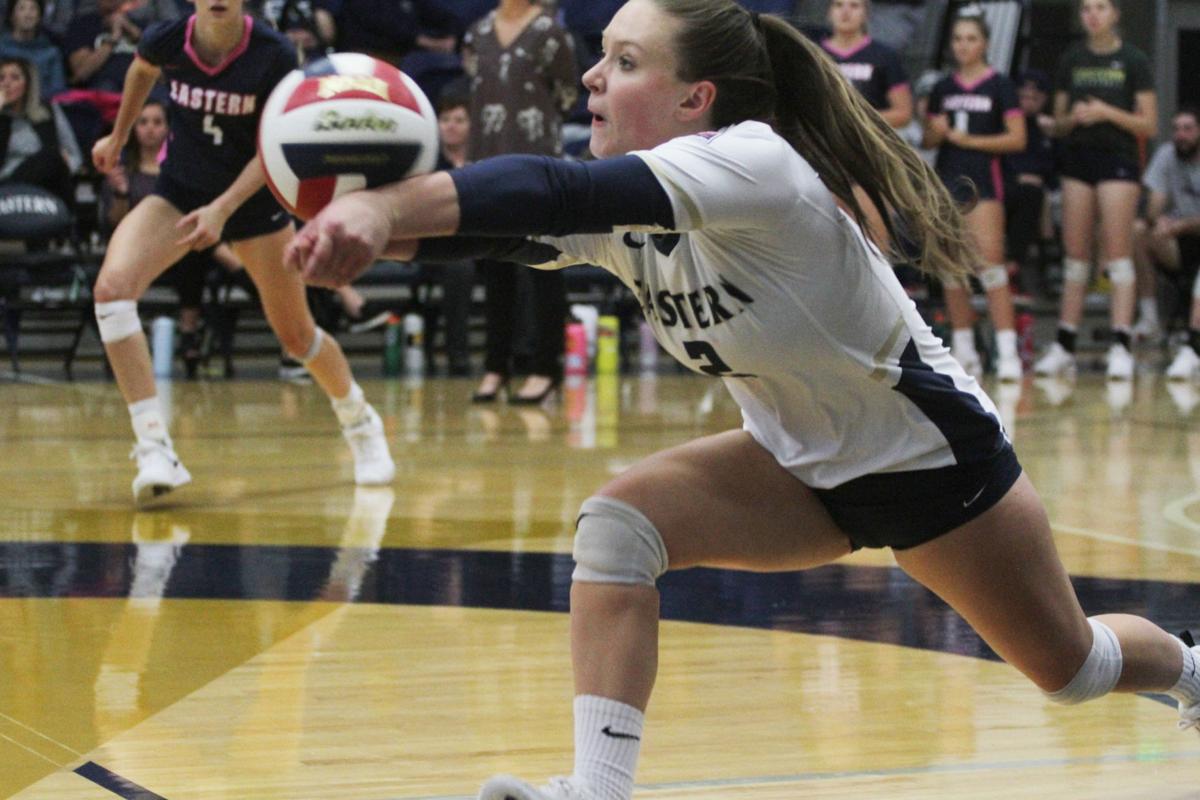 Eastern Oregon’s Kiley McMurtrey reaches for a dig during a 2019 match against Multnomah. McMurtrey, a fifth-year senior libero, is transferring to play NCAA Division I at the University of Utah.

Kiley McMurtrey stands in Quinn Coliseum at Eastern Oregon University, just weeks before she is set to move to Utah to begin her post-graduate career and a spot on the Utes volleyball team. The NAIA All-American is the all-time career leader in digs and service aces at EOU.

Eastern Oregon’s Kiley McMurtrey reaches for a dig during a 2019 match against Multnomah. McMurtrey, a fifth-year senior libero, is transferring to play NCAA Division I at the University of Utah.

LA GRANDE — Eastern Oregon University volleyball standout Kiley McMurtrey is one of the most decorated volleyball players in program history — and she is now taking her talents to Division I.

The fifth-year senior libero is transferring to play NCAA Division I volleyball at the University of Utah, where she will also be a part of the school’s Master’s Program for Speech, Language and Pathology. The Utes compete in the Pac-12, one of the top conferences in the country.

NAIA eligibility rules grant players an extra year of eligibility due to the COVID-19 pandemic.

McMurtrey exits the EOU volleyball program at the top of the list in all-time career digs with 2,150 and service aces with 132.

“I think one of the biggest things I brought to the team was just a fire and competitiveness when we played,” she said.

“I was hyper-focused,” she said. “As a person I feel like I’ve relaxed a lot and been able to figure out how to enjoy myself while I’ve been here, too.”

In 2020, McMurtrey recorded a team high 24 aces, which was good for second best in the CCC. She also led the conference with 5.15 digs per set.

Following an EOU run to the quarterfinals of the 2020 NAIA tournament, McMurtrey was awarded honorable mention All-American. She was also named CCC Libero of the Year for the third year in a row.

“This year at nationals was really fun for me,” she said. “I’ll always remember the bigger games we played.”

Off the court, McMurtrey excels in the classroom, winning 2019 CCC Scholar Athlete of the Year. The award is given to the conference’s top academic athlete across all sports.

McMurtrey holds a 4.0 GPA and earned a degree in both physical activity and health and elementary education.

Eastern volleyball head coach Kaki McLean-Morehead credits McMurtrey for helping lead the team academically. McMurtrey has been on the dean’s list every term during her time at EOU.

“She’s an incredible woman who has incredible time-management skills,” she said. “She knows what’s going to make her successful later on in life.”

McMurtrey aims to use her master’s degree to work with children as a speech pathologist. As for competing with the Utes, she is preparing for a step up into the NCAA’s premier volleyball conference.

The Utah volleyball team recorded winning records in seven of its last eight seasons and qualified for the NCAA Tournament during the last five seasons. This past year, Utah earned its highest ranking in school history, climbing all the way up to No. 7 in the country.

“It’s almost like I’m a freshman again,” she said. “I’m a lot more confident now than when I was a freshman though, just in my own skill set and what I can bring to a team.”

For McLean-Morehead and the Mountaineers, replacing McMurtrey will be no small task. The libero has been a staple of EOU’s volleyball starting lineup for the past four seasons.

“It’s going to be incredibly hard to replace her, but she’s awesome,” McLean-Morehead said. “Her relentless defense and her servicing have carried our team for the last four years.”

McMurtrey leaves behind quite the legacy at Eastern, but it won’t be the last time fans hear her family’s name announced at Quinn Coliseum. Her younger sister, Alexis McMurtrey, is currently playing as a setter for EOU.

For Kiley McMurtrey, her appreciation for Eastern Oregon University and the La Grande community is something she will cherish.

“I just really feel like because of the community and my coaches,” she said. “I’ve been able to grow as a person here more than I could have imagined.”