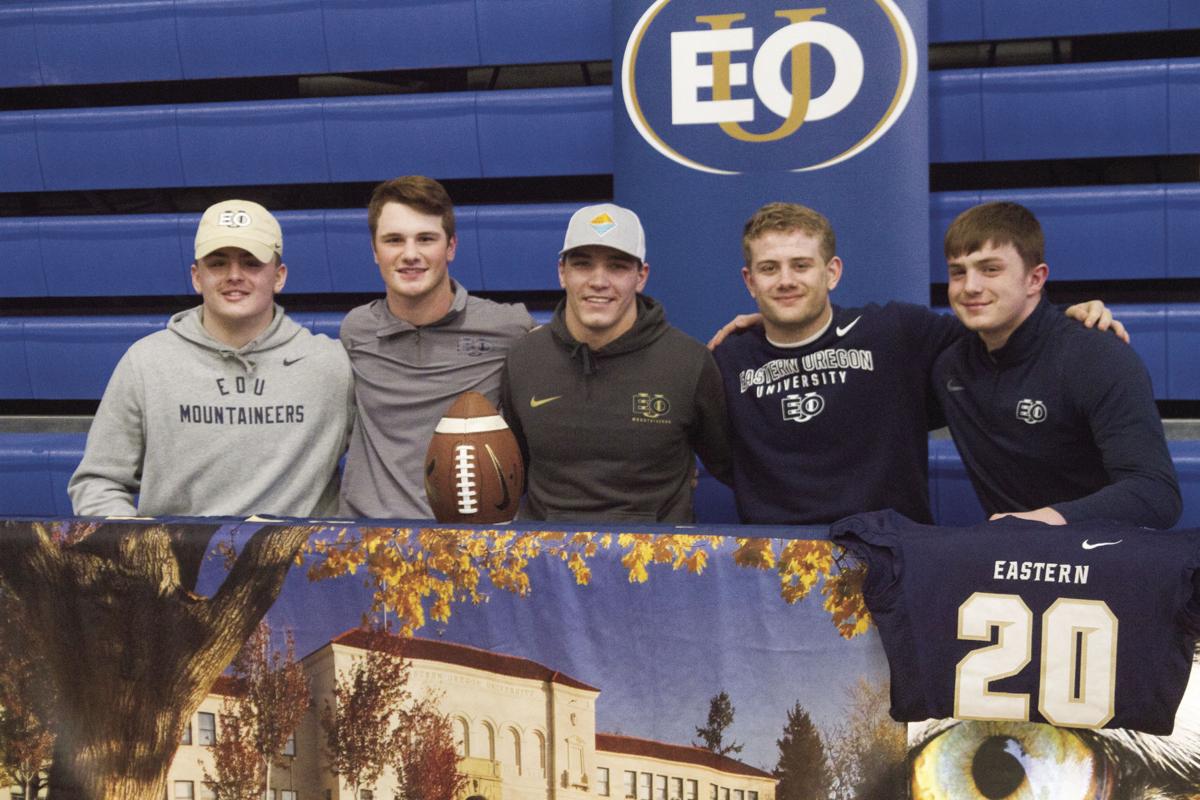 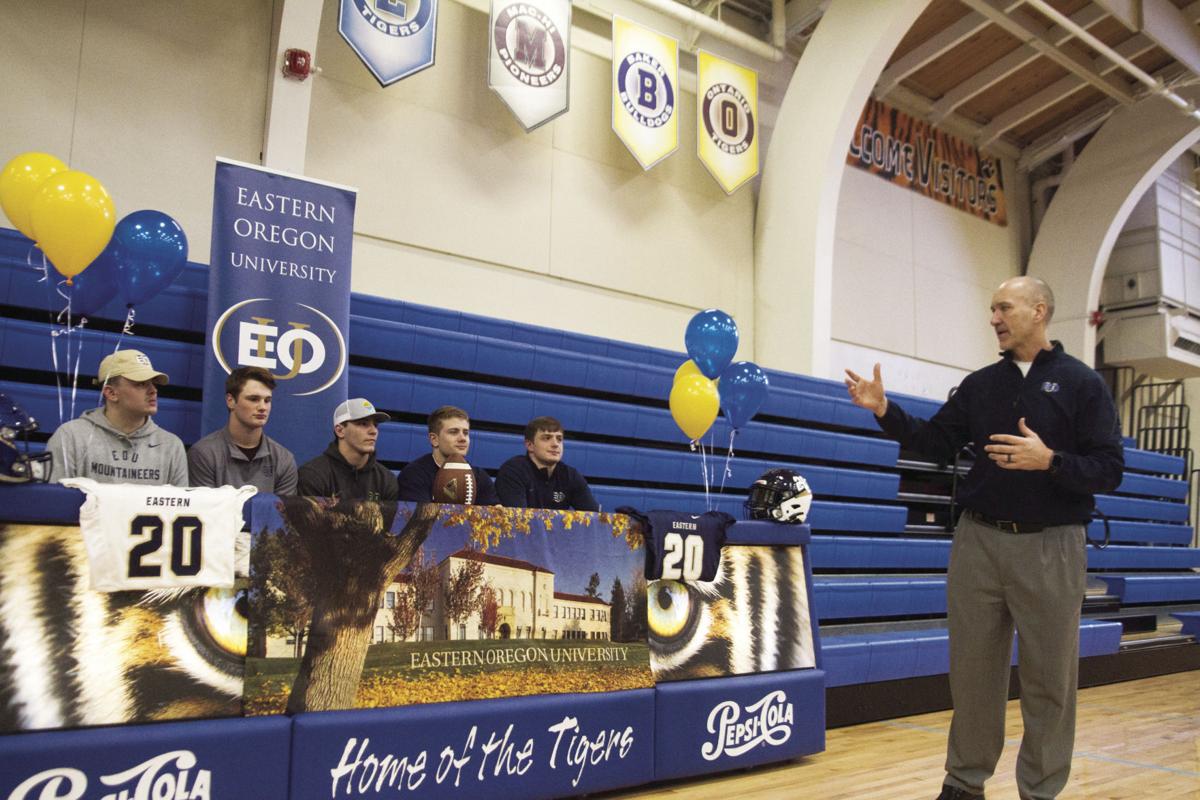 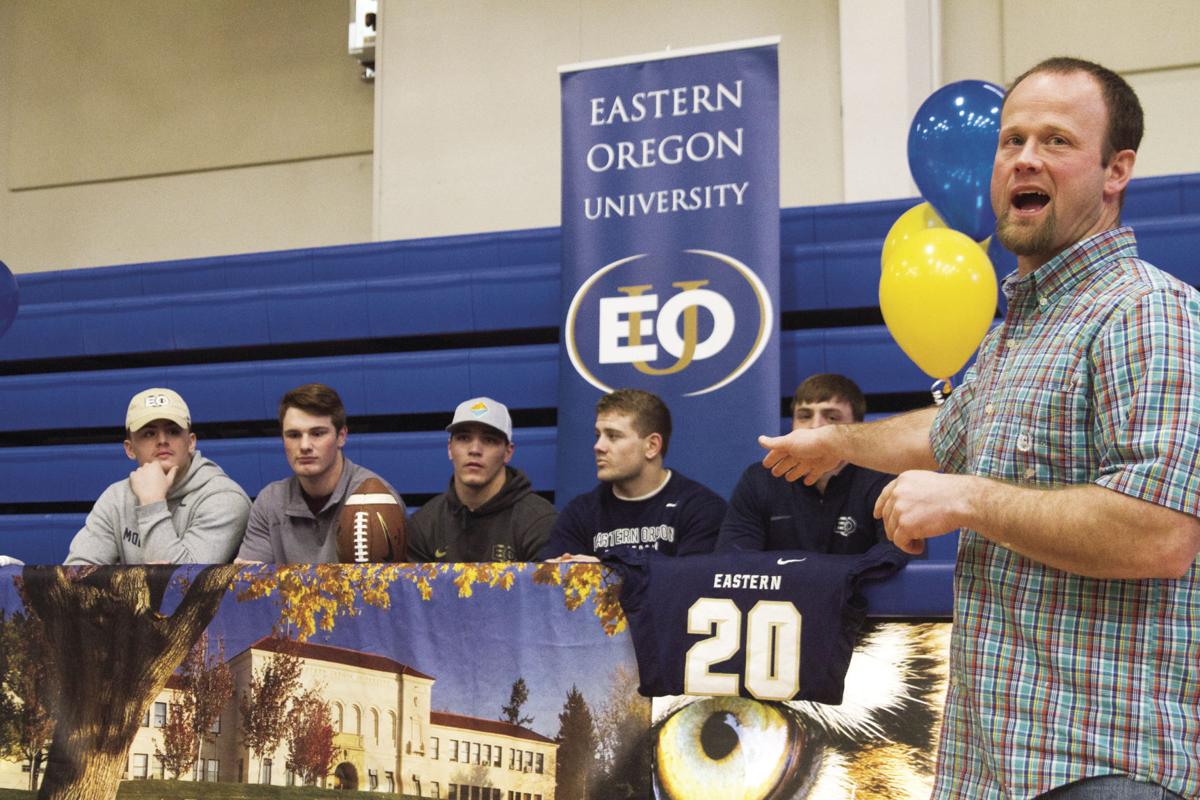 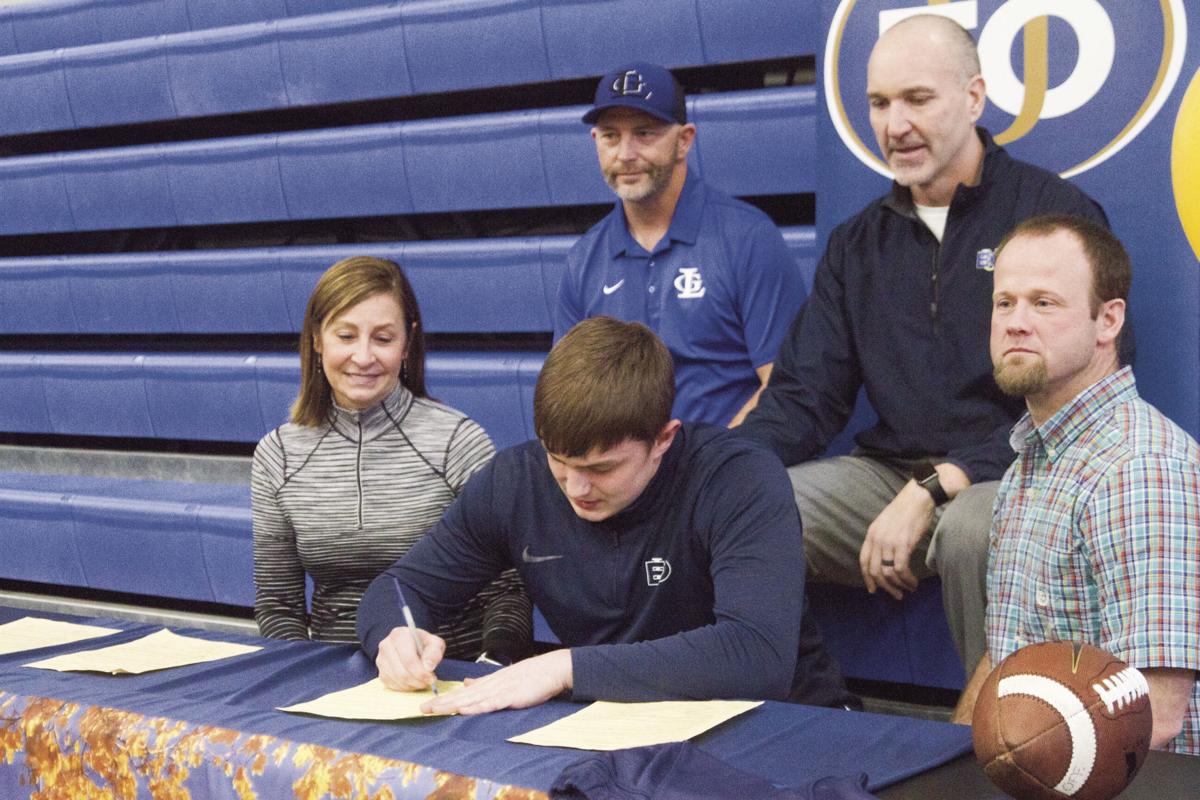 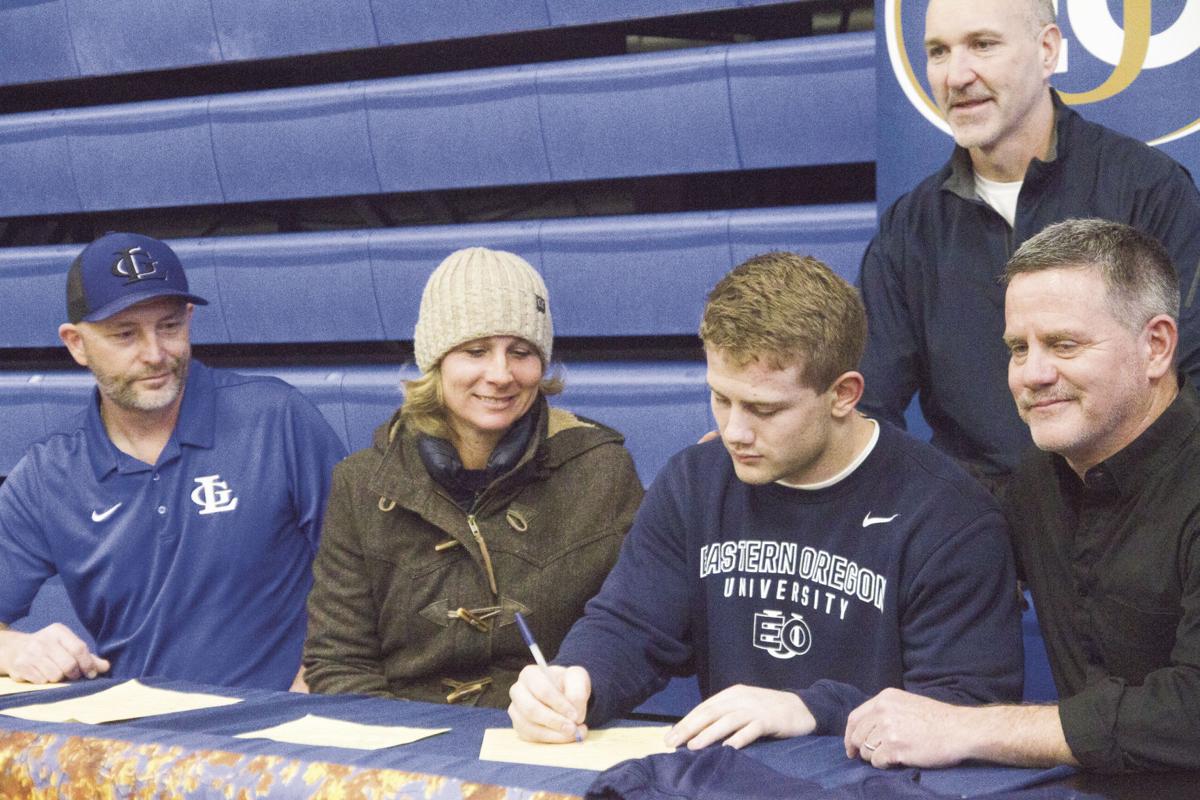 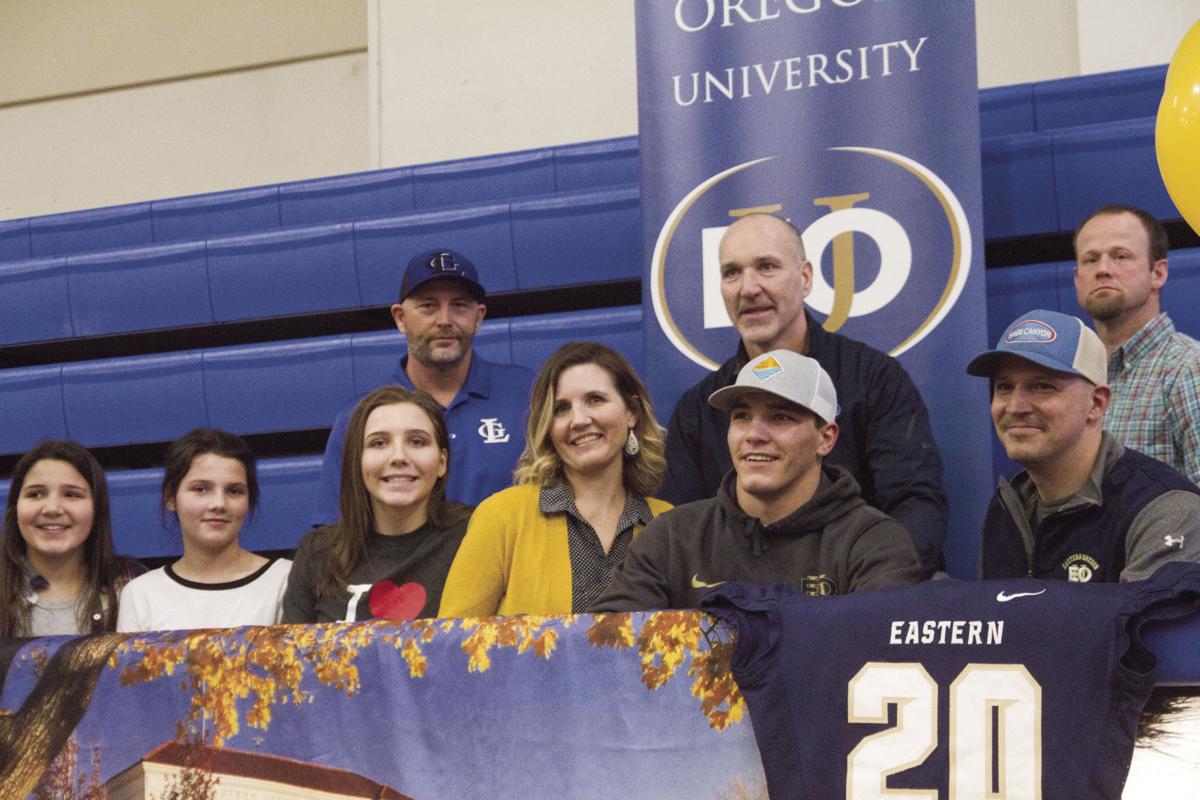 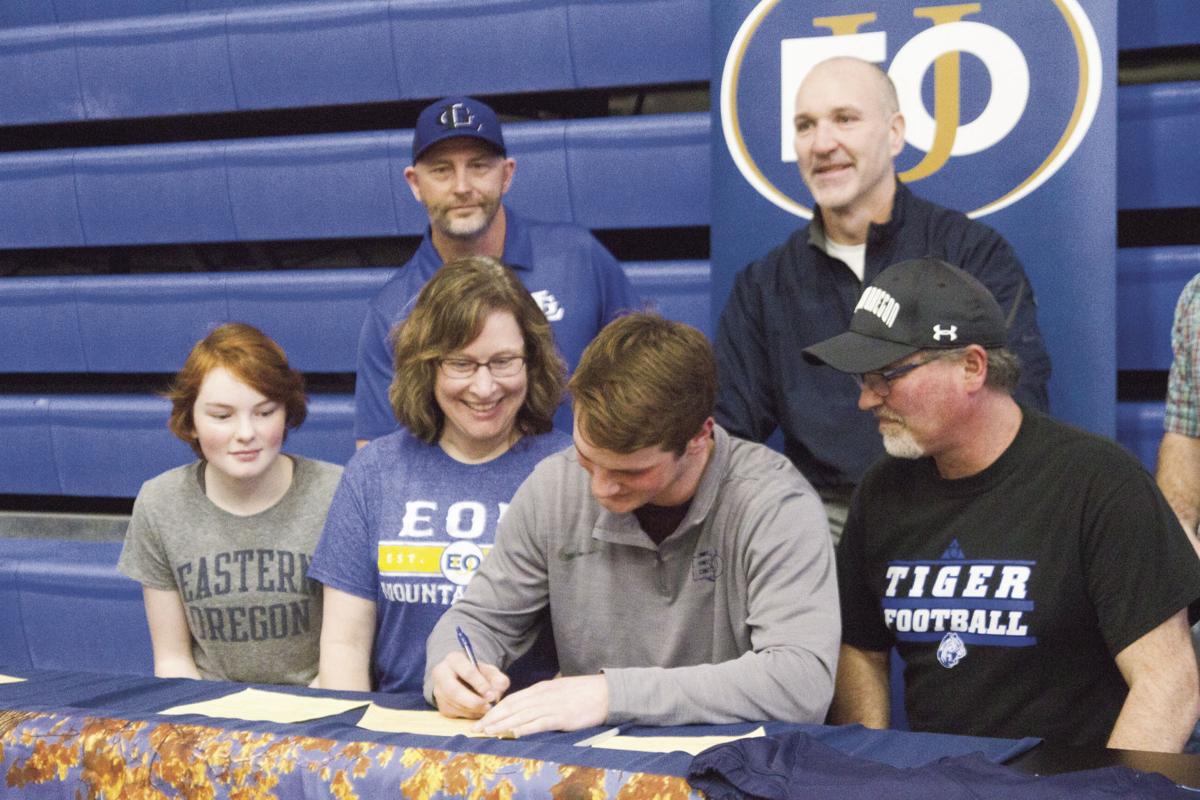 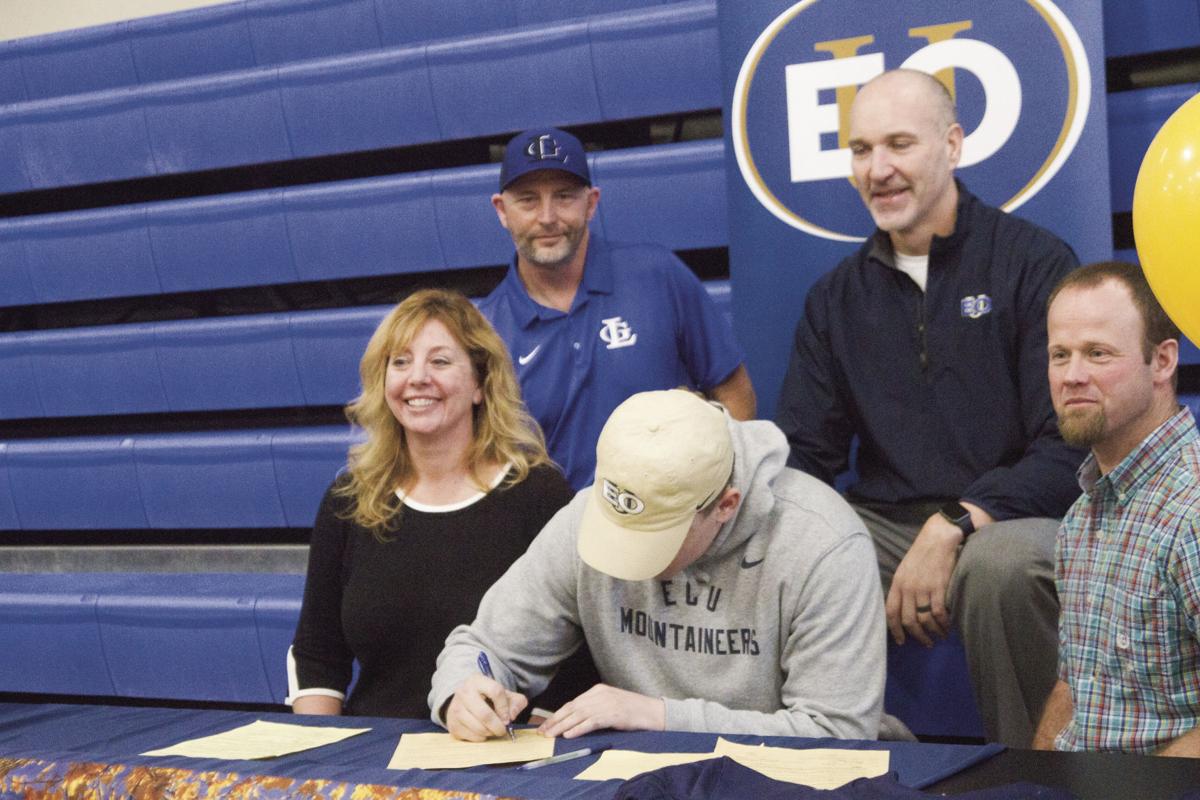 LA GRANDE — The 2020 signing class for the Eastern Oregon University football program has a distinctively local flavor — highlighted by a quintet of athletes who helped carry the La Grande Tigers to a state title.

"We just have really good chemistry," Gerst, an offensive and defensive lineman, said of the five. "We work good together, and we have a will to win."

The five signed their letters of intent Thursday afternoon at a ceremony at La Grande High School.

"It's always been my dream to play football on Saturdays, and to do it with these other four guys is a dream come true," said Shaw, a wide receiver and defensive back for LHS. "Just growing up with them, they're my brothers, and to be able to do this with them is everything."

All of the La Grande High players expressed a similar sentiment about not only playing college ball in their hometown but continuing their careers alongside four others they have played with for years.

"It means the world to me," said Shukle, who played tight end and defensive line for the school and was the state defensive player of the year. "I've always wanted to play college football. It's a dream come true, and to be able to play with my brothers and my lifelong friends is a blessing."

Reed, a running back, linebacker and the state offensive player of the year, said in addition to playing with the rest of La Grande's signees, getting to rejoin his brother Cade Reed — who is already on the EOU roster — adds to the bonus, as does the fact, he said, that he's known Camp most of his life.

"My brother's there too. Willie (Camp) and Walker (Camp) — I grew up with them — this awesome community, Coach Camp, there's so many reasons. It felt right," he said. "I've been friends with (Camp's) two boys. I've known him since I could barely walk. I'm thrilled to play under him."

Robinson, the Tigers' quarterback and linebacker, also pointed to growing up around Camp.

"I get to go play football for a guy whose sons I played football with in his backyard, and I get to go to school with part of my family," he said. "It's great support for me. I'm so thankful and grateful that I get a chance to do it."

Of the 14 Oregonians who signed to play for Eastern, 12 came from programs on the east side of the state. In addition to the five from La Grande, Camp signed a trio of athletes from Pendleton — Tanner Sweek, Travis McGee and Walker Camp, Tim Camp's son.

Coach Camp said there is a lot of talent east of the Cascades that goes unnoticed — talent he was more than willing to bring into Eastern.

"My big thing is kids on the east side of the state get overlooked because of where they're at sometimes," he said. "But that's good for me, because that means business is good. I gotta go a block and a half away to get some of the best kids in the state of Oregon to stay home and have the support that they have, and obviously that support means something to them."

The other Oregonians in the signing class are Gabe Streblow of Banks and Finn Reeves, a junior college transfer from College of the Siskyous originally from Lake Oswego.

"I think every single one of these guys wants an education, and that's why Eastern Oregon's such a great fit," Camp said of the entire signing class. "The other thing that sticks out to me is they all have position flexibility — I'm big on that. If they can play in another spot, they gotta be able to trust me and my evaluation to get them out on the field. Ultimately, that's what they want to do. They want to play football."

La Grande High head coach Rich McIlmoil pointed to the community support as a big part of why he believed the players wanted to continue and play at EOU.

Below is the rest of the signing class: