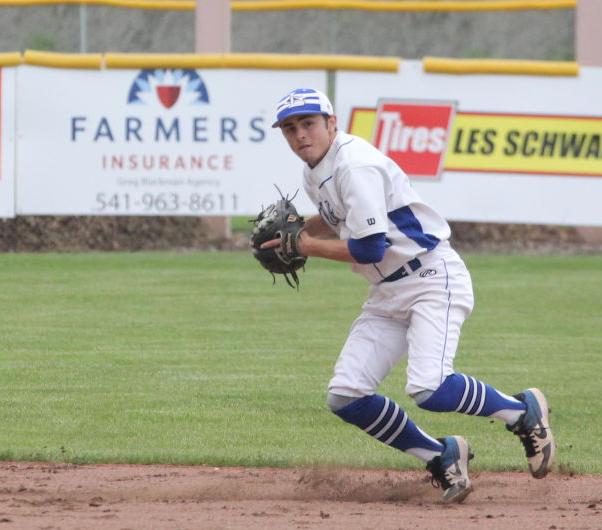 La Grande's Justin Frederick fields a ground ball during the Tigers' playoff game against Sweet Home in 2019. Frederick was the first player to officially sign with the reinstated Eastern Oregon University baseball team. 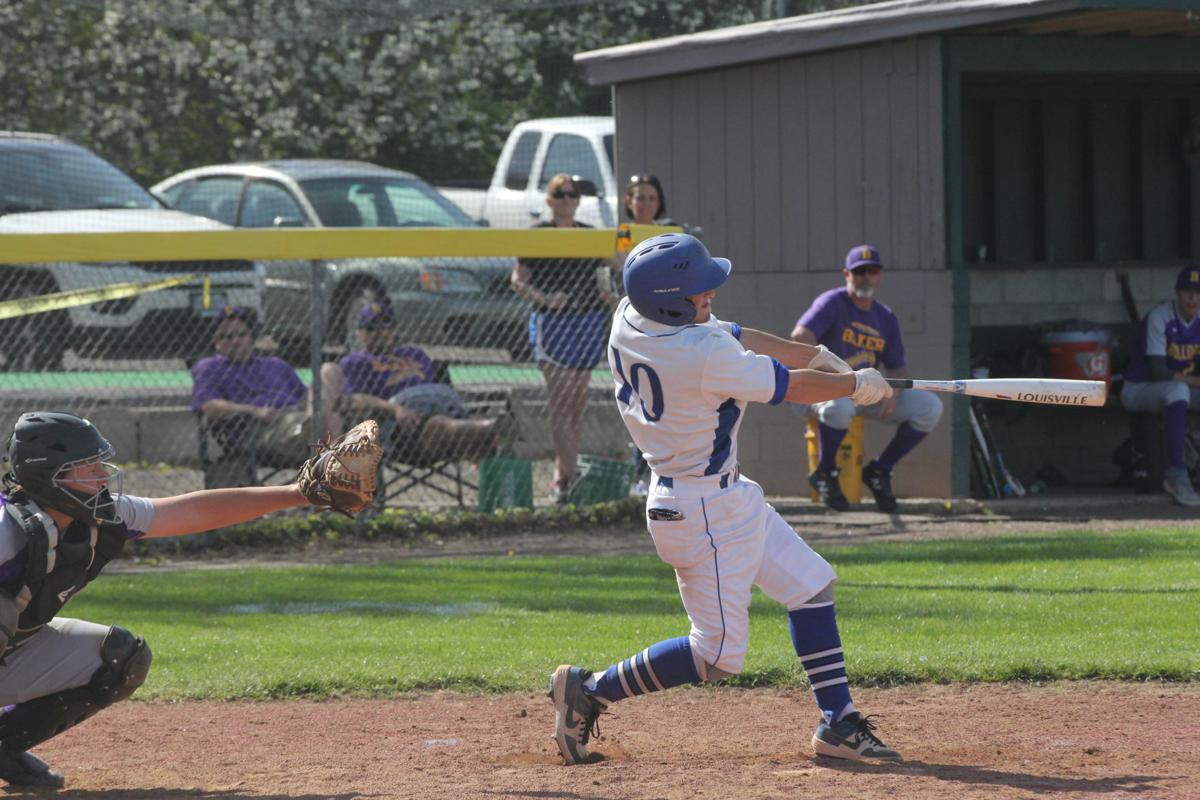 Justin Frederick takes a cut during a game against Baker in 2019. The LHS senior will play college ball in his hometown. 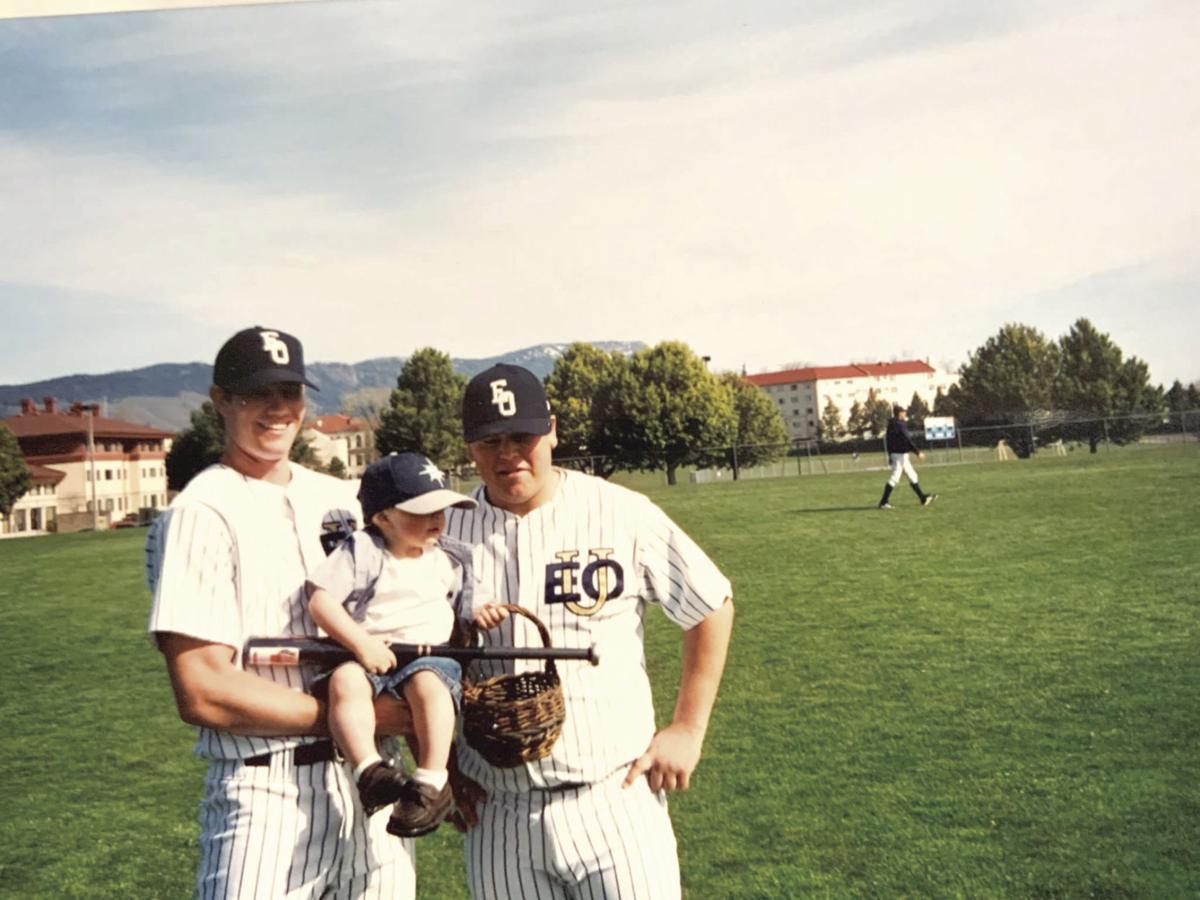 A young Justin Frederick is shown with two members of the Eastern Oregon University baseball team before the program was cut in 2006.

LA GRANDE — There is a photograph of Justin Frederick from his youth with members of the Eastern Oregon University baseball team before the program was taken away 14 years ago.

Now, the La Grande senior infielder has a distinction no one will ever be able to take from him as the first player to sign with the school's restored baseball program.

"I feel pretty honored," Frederick said of the distinction. "It's honestly perfect timing, being able to have this opportunity my senior year and being able to start the program off (next year)."

Frederick officially put pen to paper to ink his spot on the roster Feb. 19 as the first official signee for head coach Mike McInerney.

"I really like the idea of staying here in my hometown and playing for four years," Frederick said. "I've always grown up going to (different sporting events) at Eastern. I always thought it would be cool to have a baseball program here."

McInerney noted early in his tenure at EOU that he wanted to land a local athlete as the first player in the new program, and he said "that worked out perfect" with Frederick.

"(When) I initially got the position, I wanted to take advantage of the good players that are here. I wanted to get him as quickly as possible," he said of the La Grande High senior.

McInerney said he saw film of Frederick when he was still on the coaching staff at Western Oregon University, Monmouth, and because of that — and the in-town connection — Frederick was "basically the first guy I recruited."

"In the process of this job opening up and interviewing for it, I remembered him, and I knew that La Grande had a bunch of talented guys," McInerney said.

When speaking of Frederick, the coach called him "a good player. (I) met him personally, really liked him. You can tell he's really tough. He's well spoken, soft spoken, got an awesome personality."

McInerney said he met Frederick's dad, Shane, adding "family is an important thing, especially when you're getting a kid locally," and said everyone he talked to about Justin spoke well of him.

"The final piece was everybody I talked to gave him the highest recommendation — everyone in the community, all his coaches, all his teammates," McInerney said. "He can really play (and) he's got a great attitude, perfect for the team."

Frederick had verbally committed to Blue Mountain Community College, Pendleton, but he said he began talks with BMCC before EOU announced the return of its program.

The opportunity to play at a four-year school in his hometown was too good to pass up, and he said BMCC coach Brad Baker was "understanding of the whole situation."

"I have a lot of respect for Brad Baker, and he's a great guy," Frederick said. "I like him for the respect he gave me as a prospect."

McInerney said that with Frederick, he's getting a player who has baseball talent as well as a strong work ethic, the kind of player who will fit well in the new program.

"I think toughness is something we're looking for (and) he kind of exudes that," McInerney said. "A trademark of everything is looking for selfless guys. Team-first mentality, really great teammates, really coachable, especially when you're going to start a team out. You want to get it going in the right direction as fast as you possibly can.

"It's all there," the coach added of Frederick's skill set. "The base is there. He was well taught in high school. Mechanically he's strong."

Frederick believes his defensive skills will translate best to the next level.

"I've always kind of been a defensive guy and work really hard on my defense," he said. "That's probably been the best part of my game. Throughout my next four years I'd like to develop my hitting. I'd like to become a more consistent hitter."

His coach at La Grande High School, Parker McKinley, called it "exciting" that Frederick is staying in town to play at Eastern and agreed with Frederick's own assessment of what he would need to grow in to excel at the college level.

"He's very strong defensively," McKinley said while also speaking highly of his work ethic. "Offensively any time you move to the next level of baseball the pitching gets better and better. You have to improve your offensive prowess."

He noted, too, Frederick will have one advantage in that he'll have played for four years at Optimist Field, which is not only the Tigers' home field but also will be the Mountaineers' home field in the early years of the program.

"Justin's comfortable on the field they'll be playing (on)," he said. "He's used to the hitting background, the fielding background (and) just in general, the atmosphere. It's a huge advantage to be comfortable."

Frederick also is sold on what McInerney is preaching for his vision of the program.