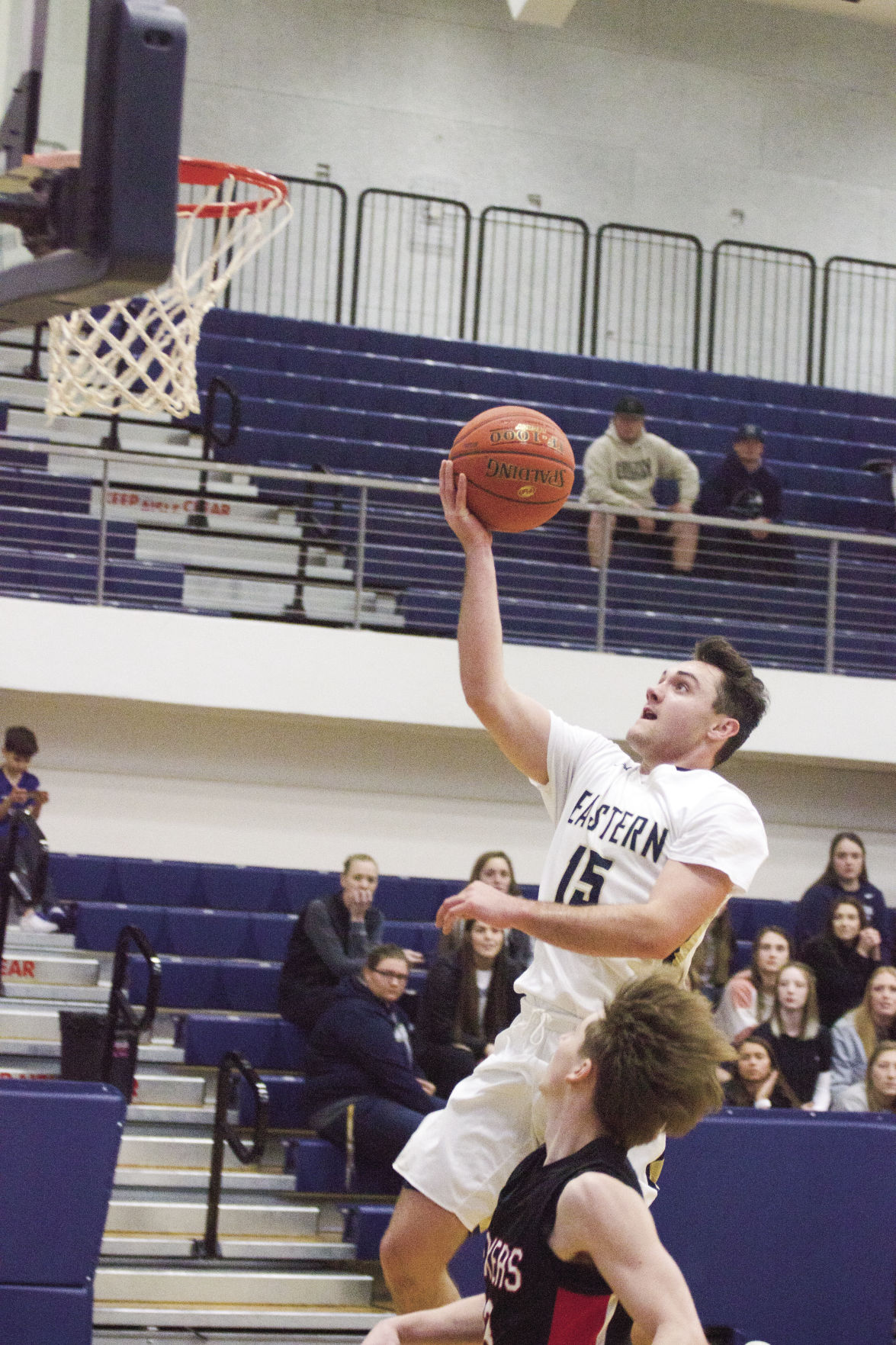 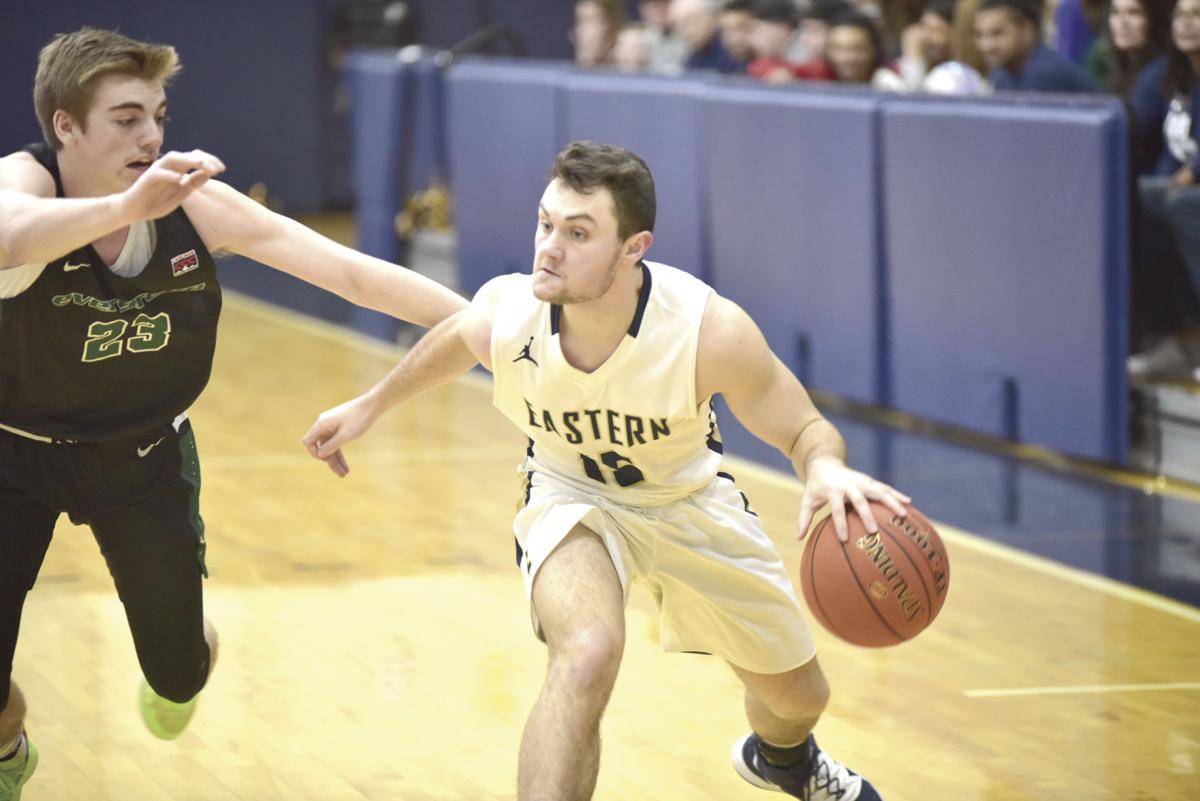 Max McCullough of Eastern Oregon University controls the ball in a game against Evergreen State College during the 2019-20 season. McCullough earned the Cascade Collegiate Conference’s 2021 Player of the Spring recognition and the 2021 College Sports Information Directors of America Academic All-District honors after leading the team in points and assists this season.

LA GRANDE — Everywhere you look in the Eastern Oregon University men’s basketball record book, you can find the name of Max McCullough.

During his fourth season at EOU, McCullough became the school’s all-time leader in points scored, three-point field goals made and free throws made.

McCullough has recorded 2,061 career points to date, becoming the first Mountaineer to surpass 2,000 points. Randy Dolven set the previous record of 1,790 points in 1967.

“Basketball is something I’ve been working toward my whole life,” McCullough said. “To be able to play at the college level, let alone break those records, really shows how much I’ve worked and proves to myself that it has all paid off.”

Born in Spokane, Washington, and raised in Post Falls, Idaho, McCullough joined the program in 2016 after a prolific high school career. Former EOU head coach Isaac Williams recruited McCullough at the beginning of his tenure.

An efficient scorer right from the start, McCullough helped the 2016-17 Mountaineers set a season record for points scored (2,976) and scoring average (90.7 points per game). However, EOU has missed out on the National Association of Intercollegiate Athletics tournament every season since McCullough’s freshman year. Heading into next season of his eligibility at EOU, McCullough is making it his personal goal to change that.

“The individual stats have been awesome, but I would trade that for a national tournament run any day of the week,” McCullough said.

The guard has a career record of 85-43 as a Mountaineer in addition to his scoring accolades. McCullough’s career scoring average of 18.9 points per game sits at fifth all time in the EOU record book.

“He just works as hard as any player we’ve had over the four years I can speak on,” said assistant coach Chris Kemp. “He just lives in the gym that way.”

One aspect of McCullough’s game that improved over time was his ability to record assists and get teammates open looks at the basket. McCullough boosted his assist average every season at EOU.

“I like to have the ball in my hands, and a big thing for me is to make my team better and exploit mismatches,” McCullough said.

For McCullough, several road bumps forced him to overcome adversity during his time so far as a Mountaineer. The guard missed the entire 2018-19 season due to a severe ankle injury, which eventually required surgeries on both ankles.

“Mentally it was tough,” McCullough said. “It took me pretty much all of last season, and I didn’t feel like myself until the playoffs.”

“I think the mental side was just as tough as the physical side,” Kemp said. “It was a grind for him the whole year, which would be hard on anyone.”

In addition to injury, COVID-19 has presented several challenges. The 2020-21 season was delayed and shortened, with no fans able to attend games.

Throughout the buildup to the season, the NAIA moved back the start date multiple times. McCullough said the EOU basketball team was training all through that waiting period.

“We had just been going so hard for so long that once (the season) got here we were kind of exhausted,” McCullough said. “That was a big part of it, just not knowing.”

The Cascade Collegiate Conference announced on Thursday, May 13, that McCullough won the 2021 Player of the Spring award, as well as First Team All-CCC. The College Sports Information Directors of America named McCullough to the 2021 Academic All-District Team, his second time receiving the honor.

Academics is a crucial element of being a student athlete for McCullough, which Kemp credited to his competitive personality.

“I’ve never heard of him getting any Bs or anything. School comes pretty naturally for him,” Kemp said. “I think all the teachers love him.”

Due to NAIA eligibility rules, which granted players an extra year of eligibility due to the COVID-19 pandemic, McCullough has his eyes set on coming back strong next year and fostering a winning environment at Eastern.

“I think we’re going to have a good shot at making a run in the conference tournament and at the national level as well,” McCullough said. “That is something I really want to achieve, taking EOU to the national tournament my senior year.”

Ideally, the Mountaineers will be back on a more consistent offseason and regular season schedule heading into the 2021-22 season.

For McCullough, his already impressive career stats and individual records will only be expanded upon further next season. By setting scoring records that may never be reached again, McCullough already has quite the legacy at EOU. The only thing left is a run toward postseason success.

“It doesn’t really matter your height, how big you are or how athletic you are,” McCullough said. “If you put your nose down and grind, you can achieve a lot.”