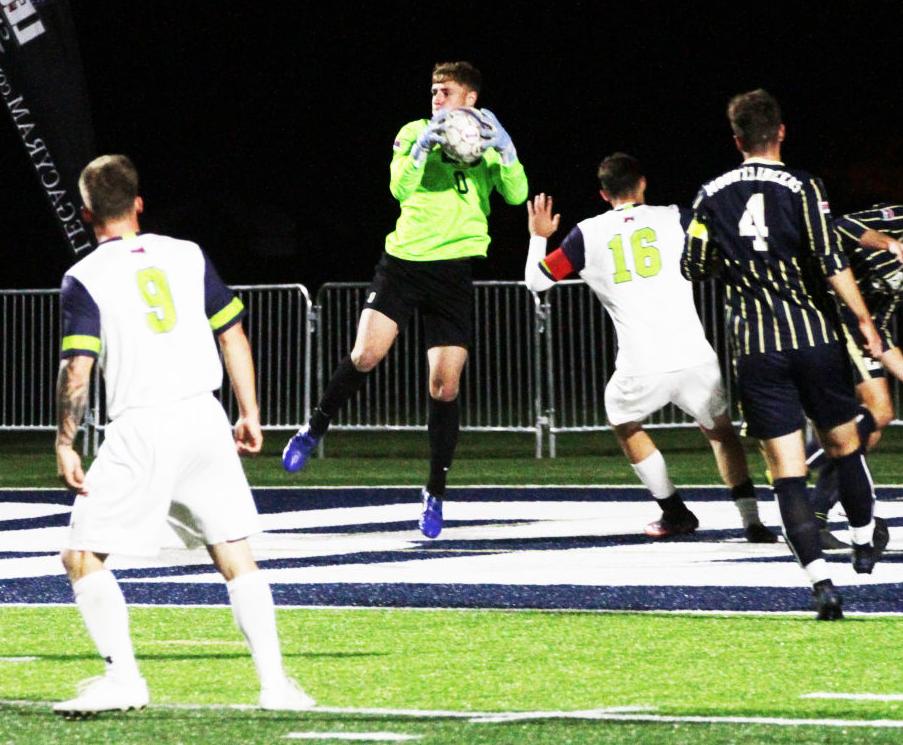 Eastern Oregon goalkpeeper Max Rose is shown during a match earlier this season. Rose stopped three straight shots in the penalty kick round to help EOU advance past Oregon Tech in the CCC tournament Tuesday. 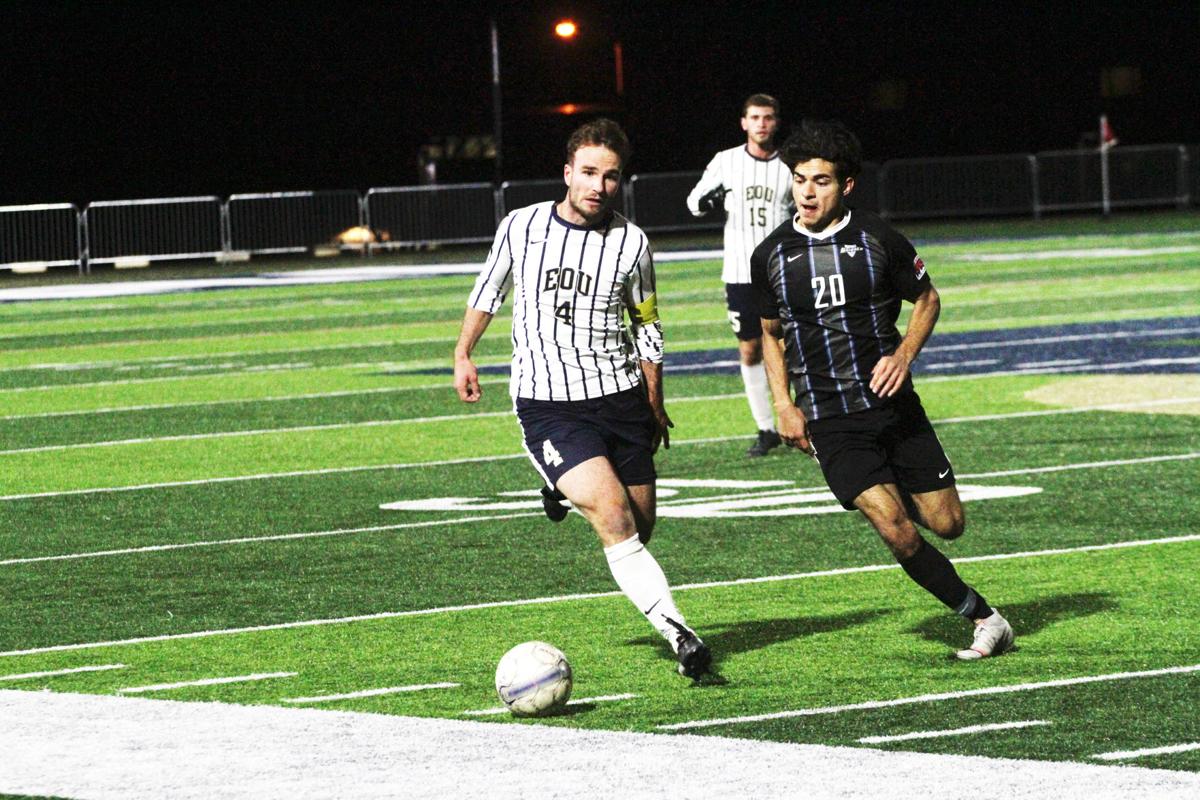 Jack Rose, shown earlier this season for EOU, hit what proved to be the game-winning penalty kick Tuesday. 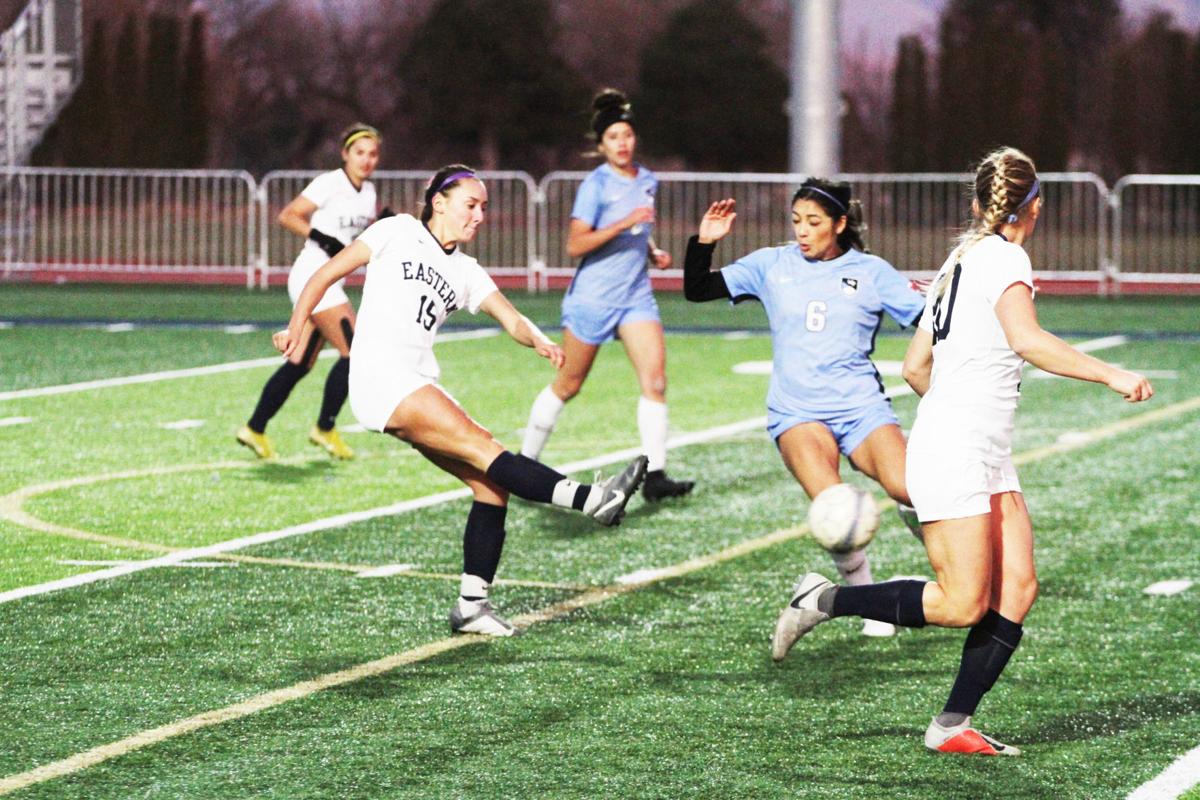 Eastern Oregon goalkpeeper Max Rose is shown during a match earlier this season. Rose stopped three straight shots in the penalty kick round to help EOU advance past Oregon Tech in the CCC tournament Tuesday.

Jack Rose, shown earlier this season for EOU, hit what proved to be the game-winning penalty kick Tuesday.

Jack Rose converted the go-ahead penalty kick in the seventh round of PKs, and his brother Max Rose made three saves in a row during the PK round to send Eastern past Oregon Tech on penalties, 4-3, Tuesday in Springfield after the teams battled to a scoreless draw in regulation and two overtime periods.

“They fought together the whole time,” EOU head coach Zach Mills said. “We thought we could beat them in regular time, especially when they went down a man with that red.”

The Mountaineers had a man advantage for nearly half the contest after John Sarna was given a red card in the 57th minute, leaving OIT to finish 10 vs. 11.

Eastern had ample opportunities, outshooting the Owls 23-3, but were unable to find the back of the net. Tech goalkeeper Mitchell Jillson had six saves through 110 minutes of action. Eastern also had two shots — including one in the final moments of the second OT — hit either the crossbar or the post.

EOU fell behind 3-1 in the PK round, but staged a rally akin to the kind that put the Mountaineers in the tournament to begin with. Elvis Pavon and Joaquin Bermejillo both converted their must-have shots to keep the season alive, with Max Rose making a save following Bermejillo’s kick to force extra PKs. Both teams missed in the sixth round, but Jack Rose stepped into a kick to put the Mountaineers up for the first time, and Max stopped the ensuing shot to send EOU to the semifinals.

“When we went behind two on penalties I still believed we’d win even if the odds were not in our favor,” Max Rose said. “After saving the first one I tried to get in the heads of the opposition and it must have worked because I saved the next two. The team’s worked hard all year, so when it came down to PKs I knew I had to step up and we came up big.”

Mills gave a ton of credit to his sophomore keeper for keeping the team in the contest.

“Everyone felt good about Max being between the posts, and even though we went down 3-1 in penalties to start they didn’t shake,” he said. “The next guys up had the confidence they needed because they knew it wasn’t our time to go home.”

Eastern (9-8-2) faces Southern Oregon in the semifinals today. EOU was originally slated to face SOU in the first round, but the University of Providence dropped out of the tournament due to internal issues, which led to the reshuffle and the meeting with OIT.

A win by EOU and a win by regular-season champion Corban today would give the Mountaineers the CCC’s second automatic berth to nationals.

The Eastern Oregon women’s soccer team is one win away from a third straight trip to the Cascade Collegiate Conference tournament championship match.

Kaitlyn McLeod scored what proved to be the winning goal with about 24 minutes to play, and the second-seeded Mountaineers edged seventh-seed Carroll College, 1-0, Tuesday night in the quarterfinals in Springfield.

“(The) ladies played very well in the second half,” head coach Jacob Plocher said. “We had a lot of quality chances. We were able to capitalize and look forward to playing Corban (in the semifinals). Savannah (Hutchinson) had a great game along with Cassidy Quick and Cailin Koupal.”

Eastern had a sizable shot advantage, with 22 shots overall, and 13 in the second half, but was unable to break through until McLeod put home the winning goal off a pass from Koupal to lift EOU back to the semifinals.

The teams played scoreless soccer for most of the night, a contrast to Eastern’s 2-0 win when the teams met during the regular season.

“They played a good game. We had a few injuries and it’s tournament soccer,” Plocher said of why the rematch was closer. “Anything can happen.”

“We had a lot of girls step up,” Plocher said.

Hutchinson had three saves in net for EOU for the shutout.

The Mountaineers (13-2-2 overall) face eighth-seed Corban today in the semifinals. The upstart Warriors upset top-seed Oregon Tech, 1-0, in the quarterfinals.

“We get an opportunity to have redemption from when we tied Corban,” Plocher said, referring to the teams’ 2-2 draw in September.