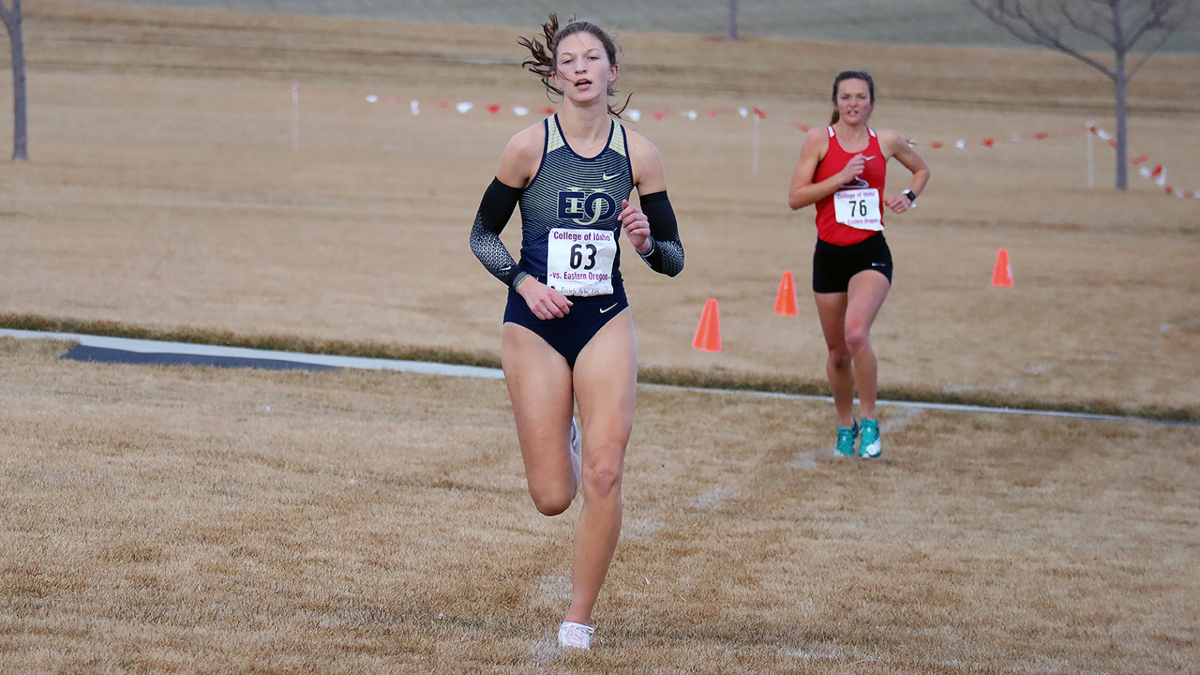 Eastern Oregon University junior Michelle Herbes of Union runs the 4K during the College of Idaho Ice Chipper on Feb. 5, 2021. She placed ninth in the event and has her sights now set on winning the 1,000-meter run at the National Association of Intercollegiate Athletics Indoor Track & Field Championships in Yankton, South Dakota. Seven of her EOU teammates also are competing in the championships March 3-6, 2021. 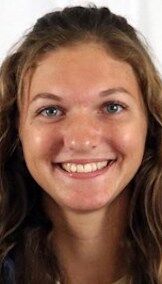 LA GRANDE — Michelle Herbes stepped off Union High School’s volleyball court Four-and-a-half years ago and on to a path toward NAIA All-American status.

Herbes, then a UHS senior, decided to turn out for cross-country in late summer of 2017 instead of volleyball, which she had played for three seasons. Now an Eastern Oregon University track star, Herbes said she made the switch believing her best chance of landing a college scholarship would be as a middle-distance runner.

Today, there is no doubt Herbes made the right decision.

She landed the athletic scholarship she sought after signing with EOU in 2018 following a successful senior year in which she placed 11th at the state cross-country meet and won the state 400-meter title in track. She has continued to progress at Eastern and in 2020 placed eighth in the 1,000-meter run at the National Association of Intercollegiate Athletics Indoor Track & Field Championships, earning her All-American status.

A year later, Herbes, the daughter of Mike and Janet Herbes of Union, is set to return to the indoor national championships to compete a second time in the same event. The college junior’s focus is not on placing.

The NAIA championships run March 3-6 in Yankton, South Dakota. Qualifying heats for the women’s 1,000 will be Wednesday, March 3, and the final will be Thursday.

Herbes qualified for nationals with a mark of 3:03 at an outdoor race in Caldwell, Idaho, in early February. Conditions were far from ideal with the temperature 35 degrees during the 1,000-meter contest.

“It was a little hard because my muscles were tight,” Herbes said.

EOU head track and field coach Ben Welch said he believes Herbes will run faster at nationals because weather will not be an issue indoors.

Welch said Herbes has excellent speed and is a tough competitor. The latter is important at indoor meets, he said, because they are on smaller tracks with tight turns, resulting in crowding and bumping.

Welch said the best is definitely yet to come for Herbes. One reason is she pushes herself hard in workouts during all seasons. “The big key is that she trains consistently and intensely all year,” Welch said. “She knows only one way to train — and that is hard.”

Welch said sometimes Herbes trains too intensely. He said there are times when she needs to ease up and give herself more recovery time, which she is doing.

”She is learning how to train smarter,” Welch said.

Herbes is majoring in exercise science at Eastern and wants to pursue a career as a cross-country and track coach after graduating.

“I have a passion for running and helping people get better,” she said.

The national indoor meet was originally set for Brookings at South Dakota State University, the site of the 2020 indoor championships. However, it was moved to the Ruth Donohoe First Dakota Fieldhouse in Yankton, South Dakota, due to the COVID-19 pandemic.

Herbes is one of eight EOU athletes who will be competing at the NAIA 2021 Indoor Track & Field Championships. The following teammates join her:

• Jasmine Devers, a sophomore from Boise, Idaho, who will compete in the women’s 200-meter race.

• Allexander Kosel, a junior from Roberts, Montana, in long jump and triple jump.

• Cody Milmine, a sophomore from Buffalo, Wyoming, in the 60-meter dash.

• Hunter Nichols, a sophomore from Heppner who is running in the 1,000-meter race.

• Darrian Walker, a junior from Emmett, Idaho, competing in the pole vault.

• Tyler Davis, a junior from Sandpoint, Idaho, in the heptathlon.

• Sam Roddewig, a senior from Helena, Montana, in the heptathlon.

LA GRANDE — The United States Track & Field and Cross Country Coaches Association announced its 2021 Regional Athlete and Coach of the Year awards on Friday, Feb. 27, and Eastern Oregon University was not overlooked — not by a long shot.

Kosel and Devers both will be competing this week in Yankton, South Dakota, at the 2021 National Association of Intercollegiate Athletics Indoor Track & Field Championships. Six other EOU athletes join them in representing the Mountaineers in several events at the championships, which run March 3-6.

Kosel is ranked fourth in the triple jump with a mark of 47-11 that he hit in February at the Polar Vortex Classic in Caldwell, Idaho. In the long jump, Kosel is seeded eighth with a leap of 23-6. His mark in the long jump was posted Feb. 5 at the College of Idaho Icebreaker. His triple jump mark is the second best indoor mark in EOU history, and his long jump mark ranks third. Both his marks are the best in the West Region.

Devers will run in the 200-meter dash at the national meet. She is seeded fifth overall for the event with a time of 24.62. She posted her time in early February, also at the Icebreaker. Devers’ 200 time is now the fastest time in EOU history for the indoor season.

Welch is in his 19th year as Eastern’s head coach. He has led the EOU men to a 22nd ranking in the USTFCCCA National Rating Index and No. 1 in the West Region.

Rhodes is in her fourth year as the top assistant under Welch at Eastern. She coaches and oversees a multitude of events, including the jumps, sprints, hurdles and combined events. She helped lead athletes to six national-qualifying positions in just two regular-season meets during the 2020-21 indoor season.