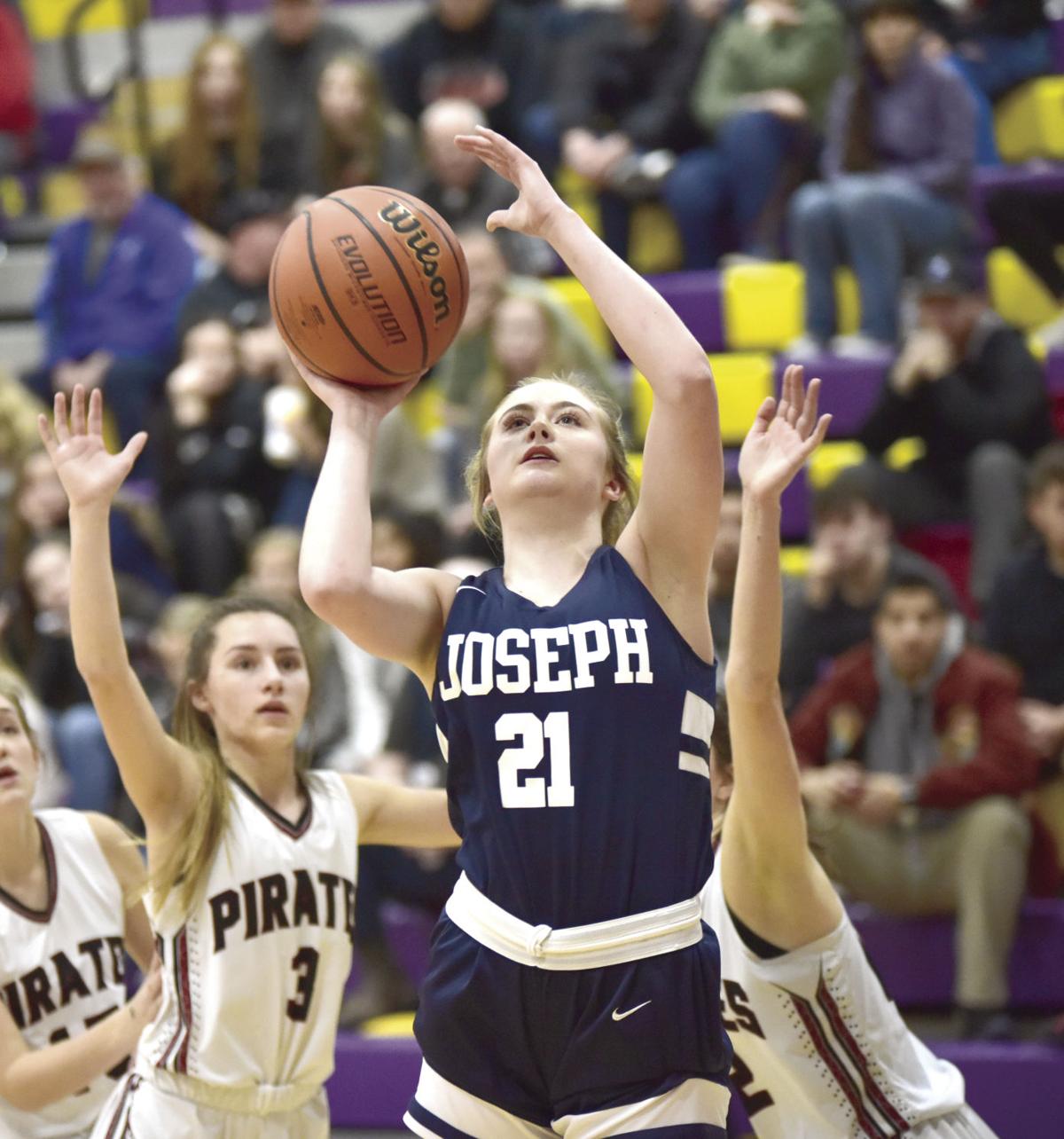 Joseph’s Sabrina Albee takes a shot March 7 during the 1A state tournament against Perrydale. Albee was named the Old Oregon League player of the year. 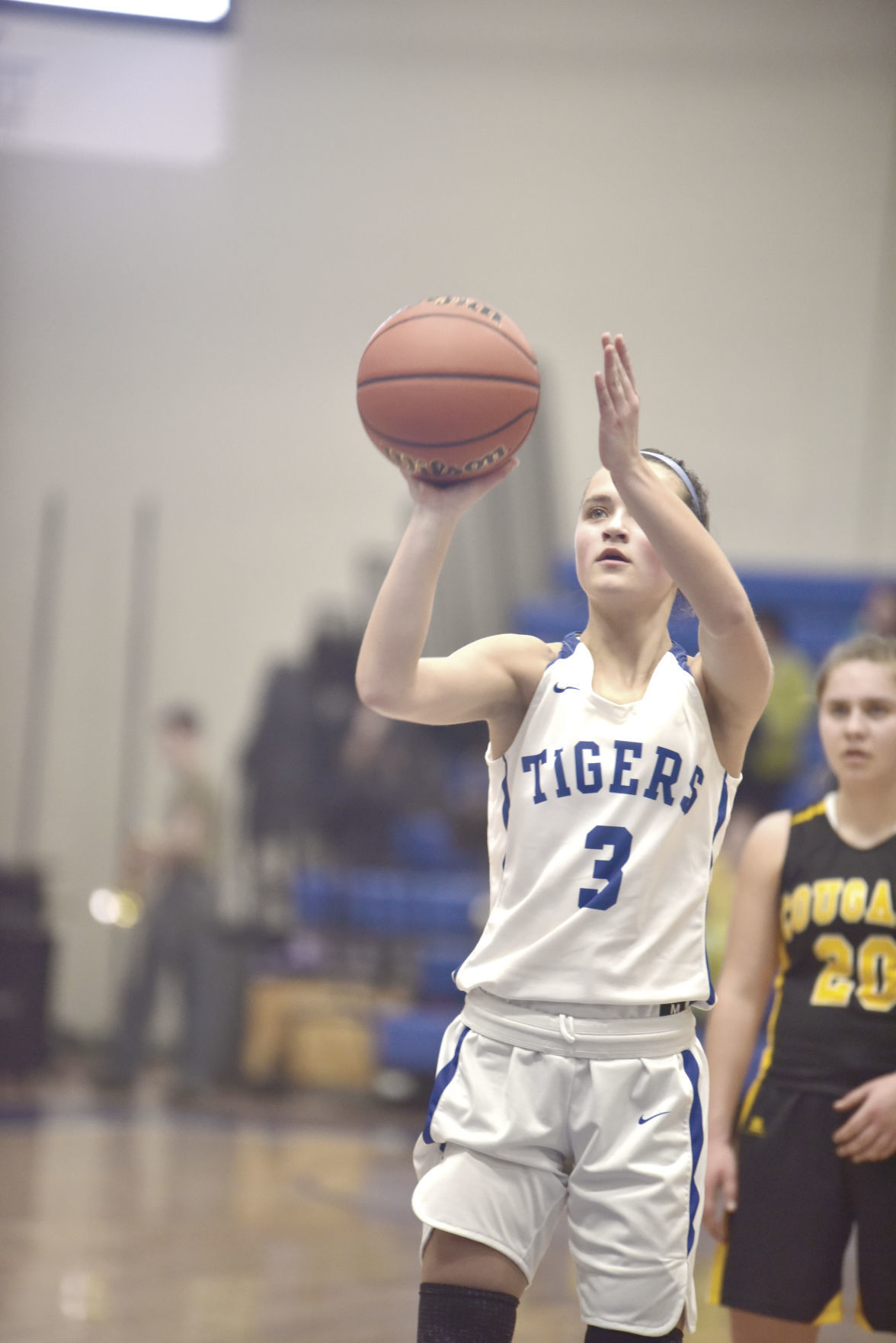 La Grande’s Camryn Collman was one of five players named to the all-Greater Oregon League squad as a first-team all-league member. 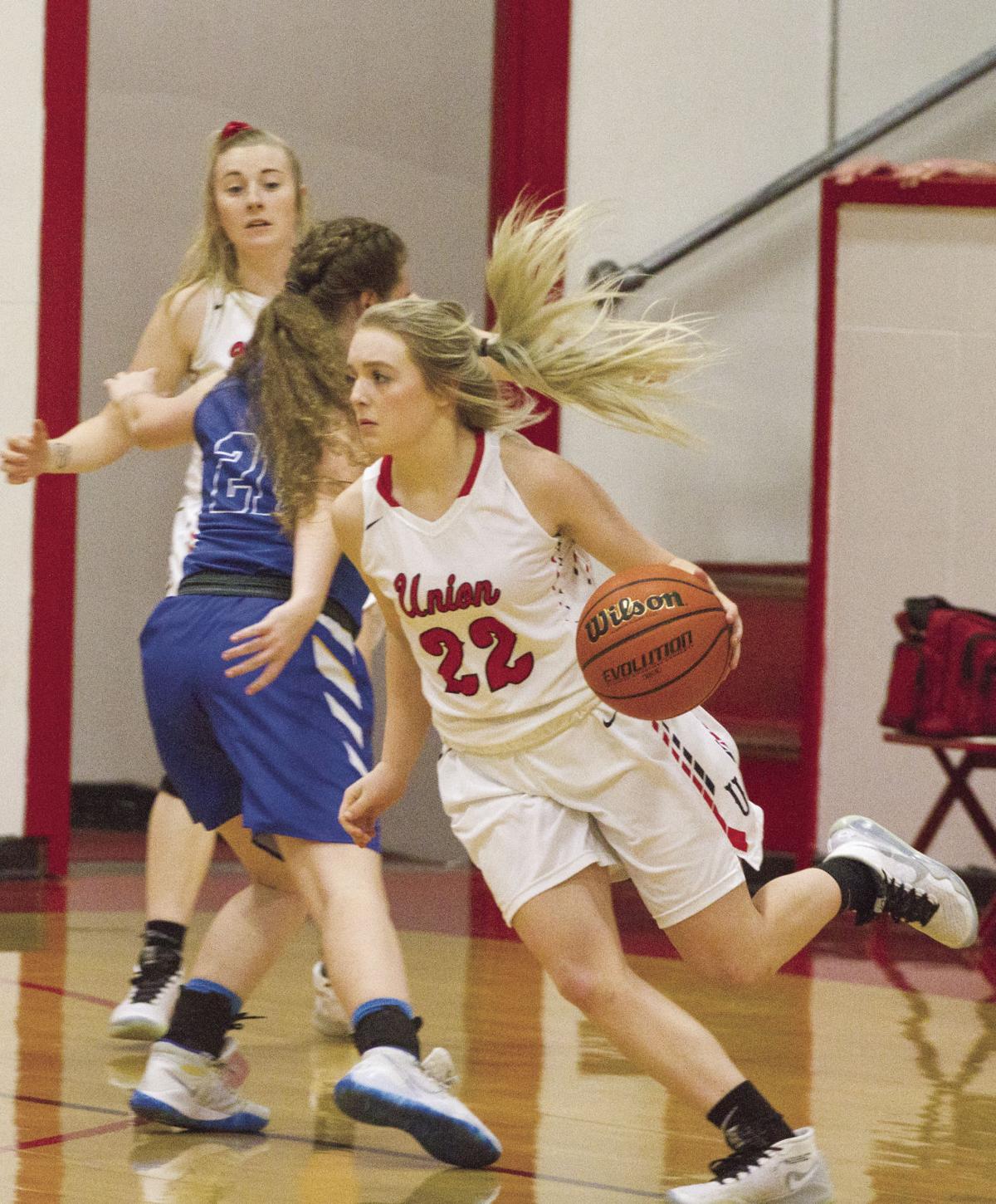 Union’s Callie Glenn was one of three players to be named a unanimous all-Blue Mountain Conference first-team member.

Joseph’s Sabrina Albee takes a shot March 7 during the 1A state tournament against Perrydale. Albee was named the Old Oregon League player of the year.

La Grande’s Camryn Collman was one of five players named to the all-Greater Oregon League squad as a first-team all-league member.

Union’s Callie Glenn was one of three players to be named a unanimous all-Blue Mountain Conference first-team member.

For the second year in a row, Joseph’s Sabrina Albee was named the Old Oregon League girls basketball player of the year.

The junior guard, who is widely considered one of the top players in the state at the 1A level, was among three Joseph players and 15 from the area to be named to the all-OOL squad after leading the Eagles to a fifth-place finish at the state tournament with an overall record of 22-8. It’s the third year in a row Joseph has won at least 22 games and placed at state.

Albee averaged 18.3 points per game, 3.0 assists and 2.7 steals to lead all Joseph players during the state tournament, and capped the season with a 20-point performance in the semifinals against eventual state champion Crane and a 21-point effort in the third-place game against Perrydale, a contest that saw her score 19 points in the second half.

Rarely on the season was she held to fewer than 20 points, and on three occasions she netted 30 or more, topping off with a 33-point game in a win over Jordan Valley.

She was joined on the first-team by senior guard Madelyn Nelson, who was primarily a factor on the defensive end for the Eagles but upped her offensive output late in the season, highlighted by a 25-point game and a 20-point night in back-to-back contests.

Junior guard Brianna Micka was tapped as a second-team selection.

Elgin, which reached the state playoffs for the first time since 1996 and won 20 games, also had two first-team selections and saw four players total recognized.

Seniors Jayden Palmer and Tymra Anderson, who were key factors in a turnaround for the program from four wins their freshman year to 20-6 this season, were the first-team recipients. Palmer, a guard, had one of the best games of any player in the league this season when she scored 30 points in a win over Joseph, while Anderson was a constant double-double threat and a force in the post.

Powder Valley, which turned its season around after a slow start, also landed four players on all-league, led by Belle Blair, who was named to the first team.

Blair’s impact on the Badgers was immediate. The Badgers were 4-5 before her return from an ankle injury suffered during the volleyball season. She posted a double-double in her first game and helped guide Powder Valley to a 11-6 record after she took the court and a spot in the second round of the state playoffs.

Keanna Bingham was named to the OOL second team, and both Autumn Davis and Josi Krieger were given honorable mention.

The La Grande girls reached the 4A state tournament for the first time since the 2015-16 season before their hopes of competing for a state title were dashed by the tournament’s cancellation due to the coronavirus. LHS finished 18-7 on the season, went 5-1 to place second in the Greater Oregon League, and landed five players on the all-GOL squad.

Junior guard Camryn Collman, who during the season became the third player in the LHS girls program to reach 1,000 career points, was named to the first team along with junior post Ella Dunlap. The two were the main offensive catalysts for the Tigers and both came up with big games late in the season. Collman dropped 26 points in the GOL district semifinals against McLoughlin — the contest that saw her break into the 1,000-point club — and Dunlap followed with 21 points in the GOL title game at Baker and 27 points and nine boards in the playoff opener against Cascade to help push the Tigers to the state tournament.

Sophomore guard Callie Glenn and senior guard Brianna Kohr helped drive the best season for the Union girls basketball program since 2014-15 — which ended with a fifth-place finish at the 2A state tournament and a 25-5 record — and as a result were named to the all-Blue Mountain Conference’s first team.

Glenn was one of three players who were unanimous first-team selections. The sophomore was the Bobcats’ primary offensive catalyst, scoring 20 points or more on several occasions for Union.

Kohr, meanwhile, turned in an effort nobody in Union soon will forget to help get the Bobcats to the state tournament when she caught fire in Union’s 65-31 win over Lakeview in the first round of the playoffs, scoring 35 points and draining 10 3-pointers.

Enterprise, which nearly pulled off an upset of eventual state runner-up Monroe in the first round of the playoffs, landed three players on the all-BMC squad, led by unanimous first-team selection Ashlyn Gray. The senior post scored 7.9 points, added 7.4 rebounds and claimed 3.5 steals for Enterprise.

Two other members of the Outlaws, who finished 17-7, were named to the second team — senior post Carsyn Miller and junior guard Zari Bathke.

The boys all-league teams will be posted in Thursday's Observer.