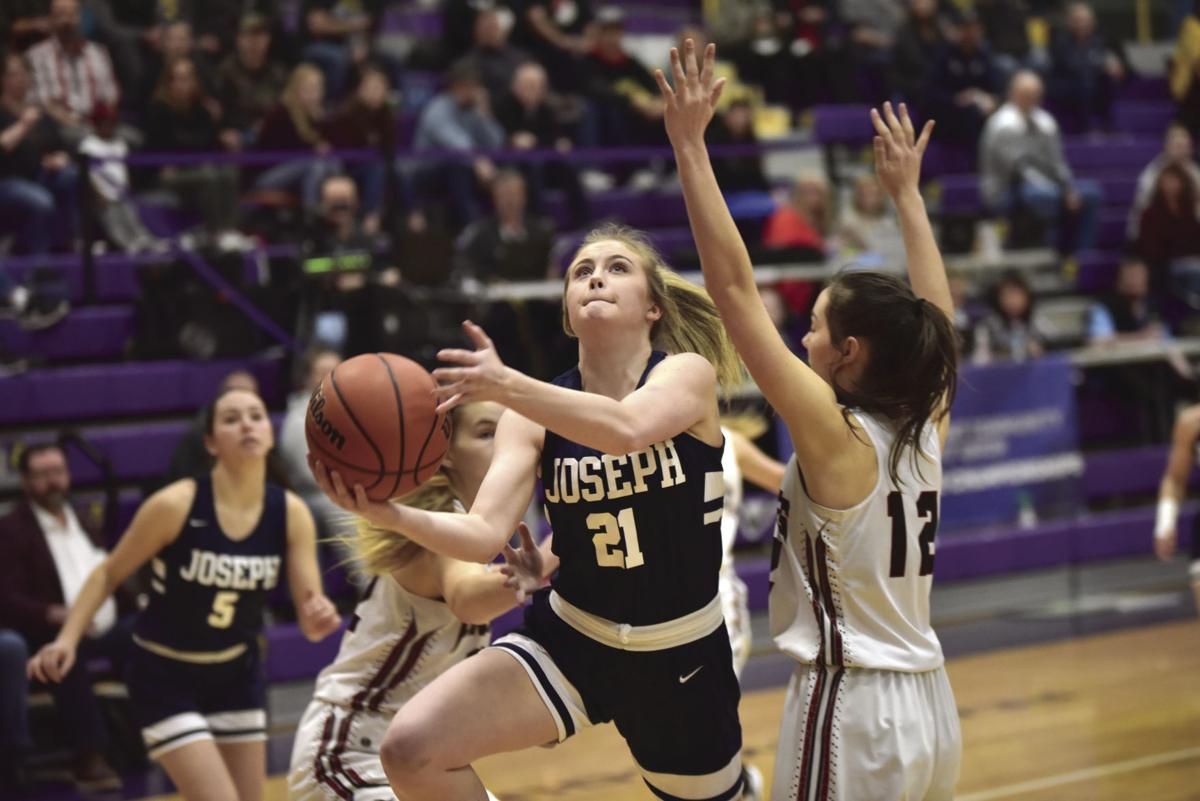 Joseph junior Sabrina Albee was named the 1A state player of the year along with Erin Counts of St. Paul and Kelsie Siegner of Crane. 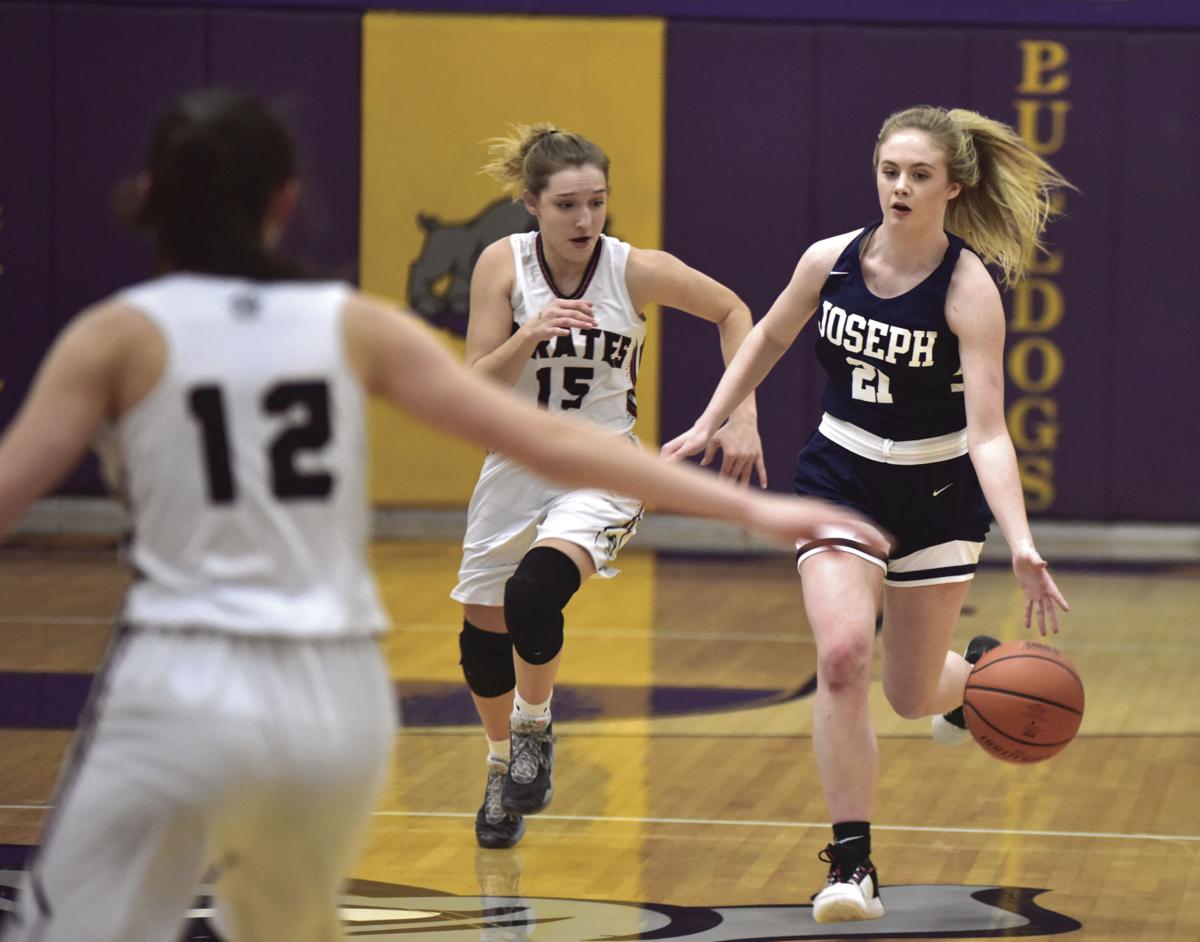 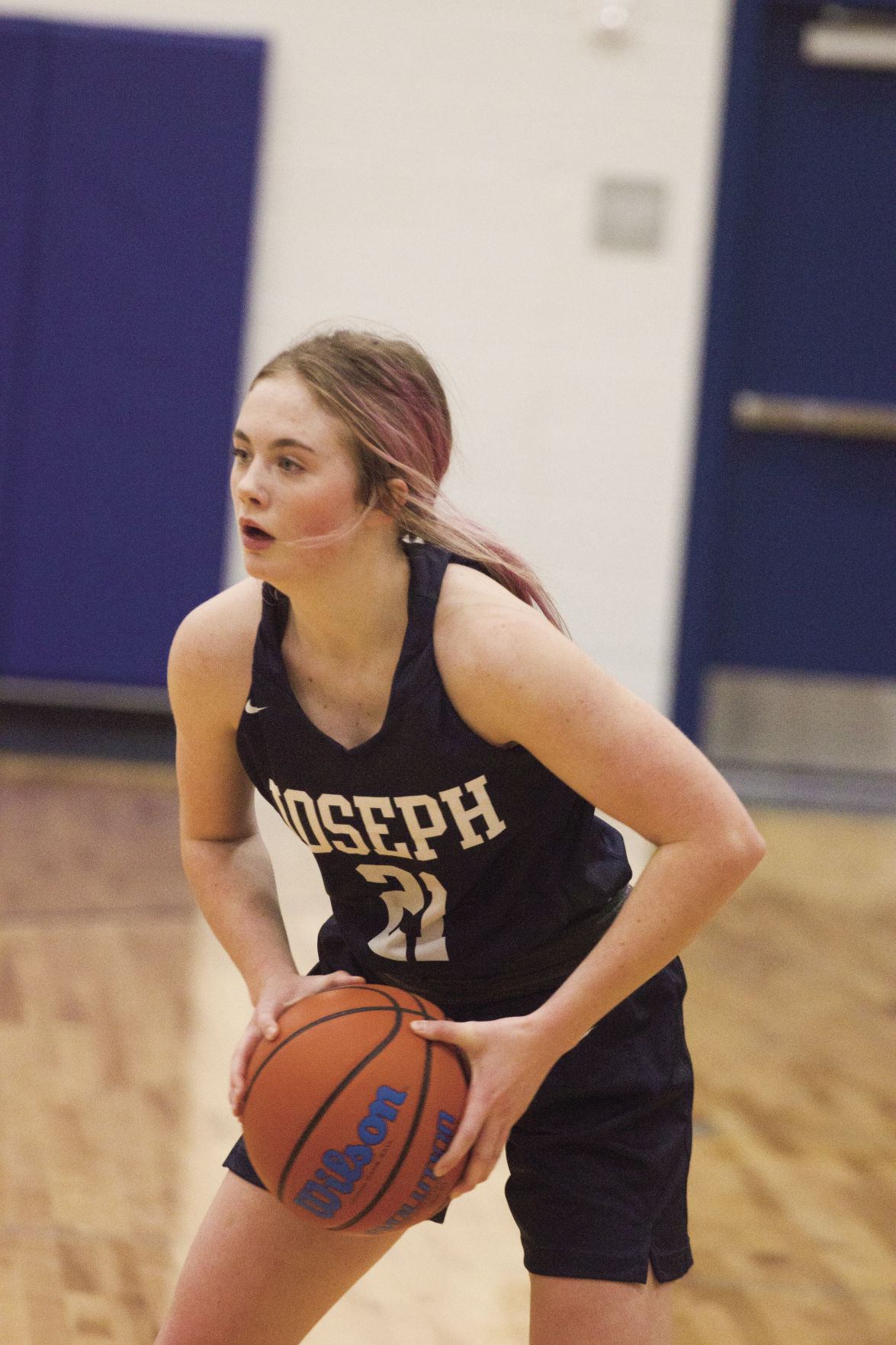 Joseph’s Sabrina Albee surpassed both the 1,000-point and 1,500-point mark in her career this season. 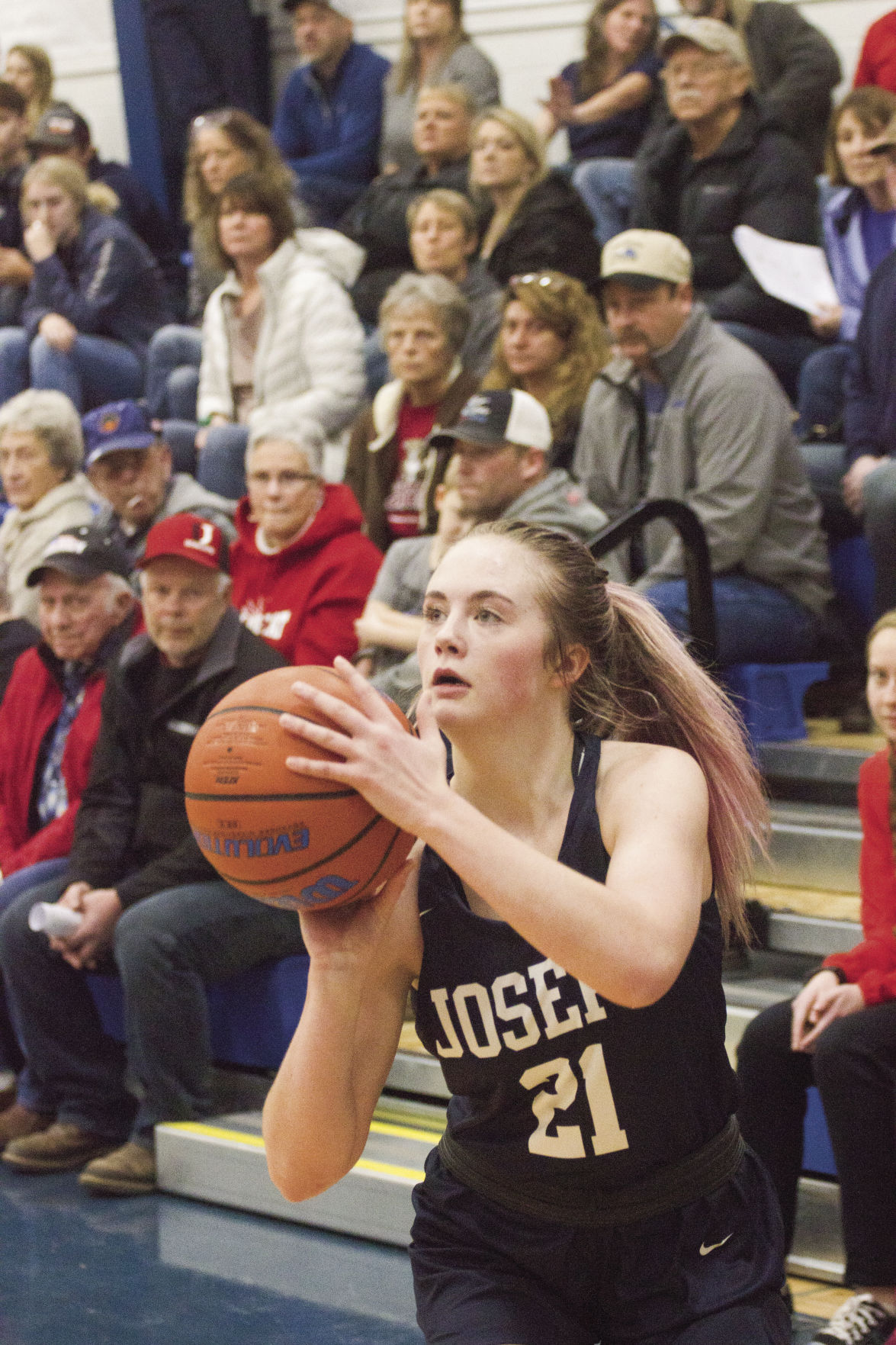 Joseph’s Sabrina Albee was one of three players to share 1A state player of the year honors after she scored 20.3 points this season to go with 7.1 rebounds, 3.2 assists and 3.1 steals. 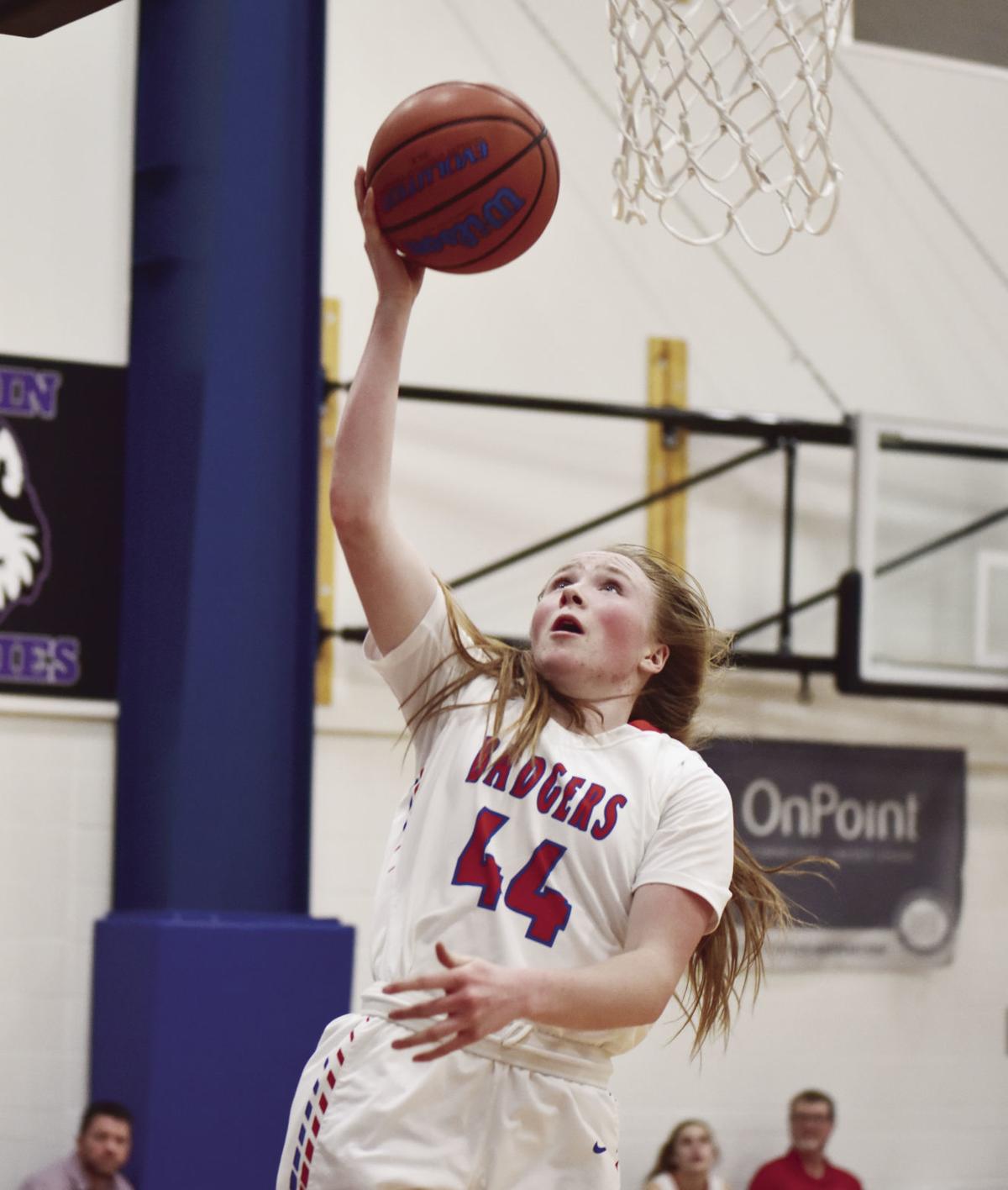 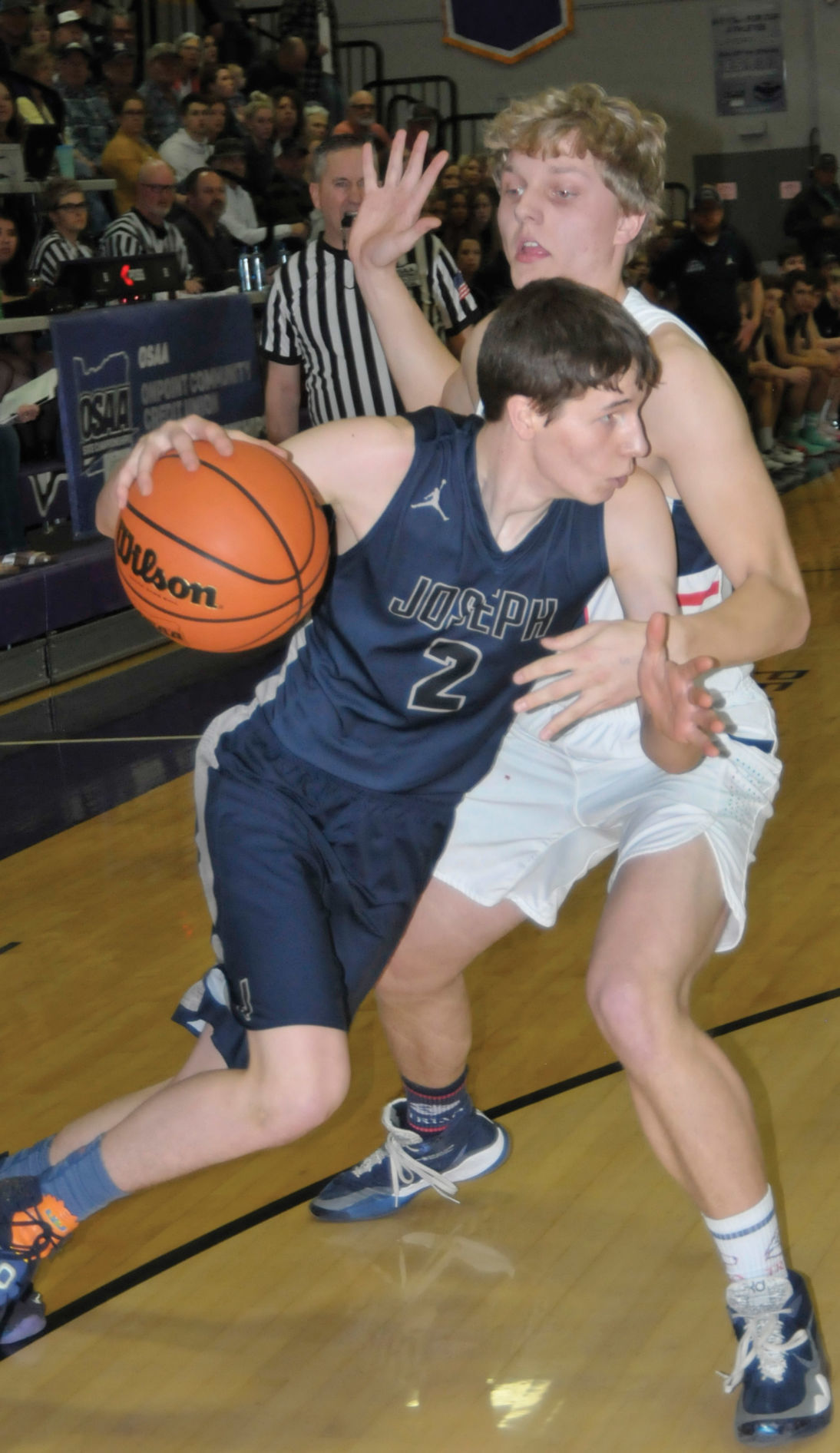 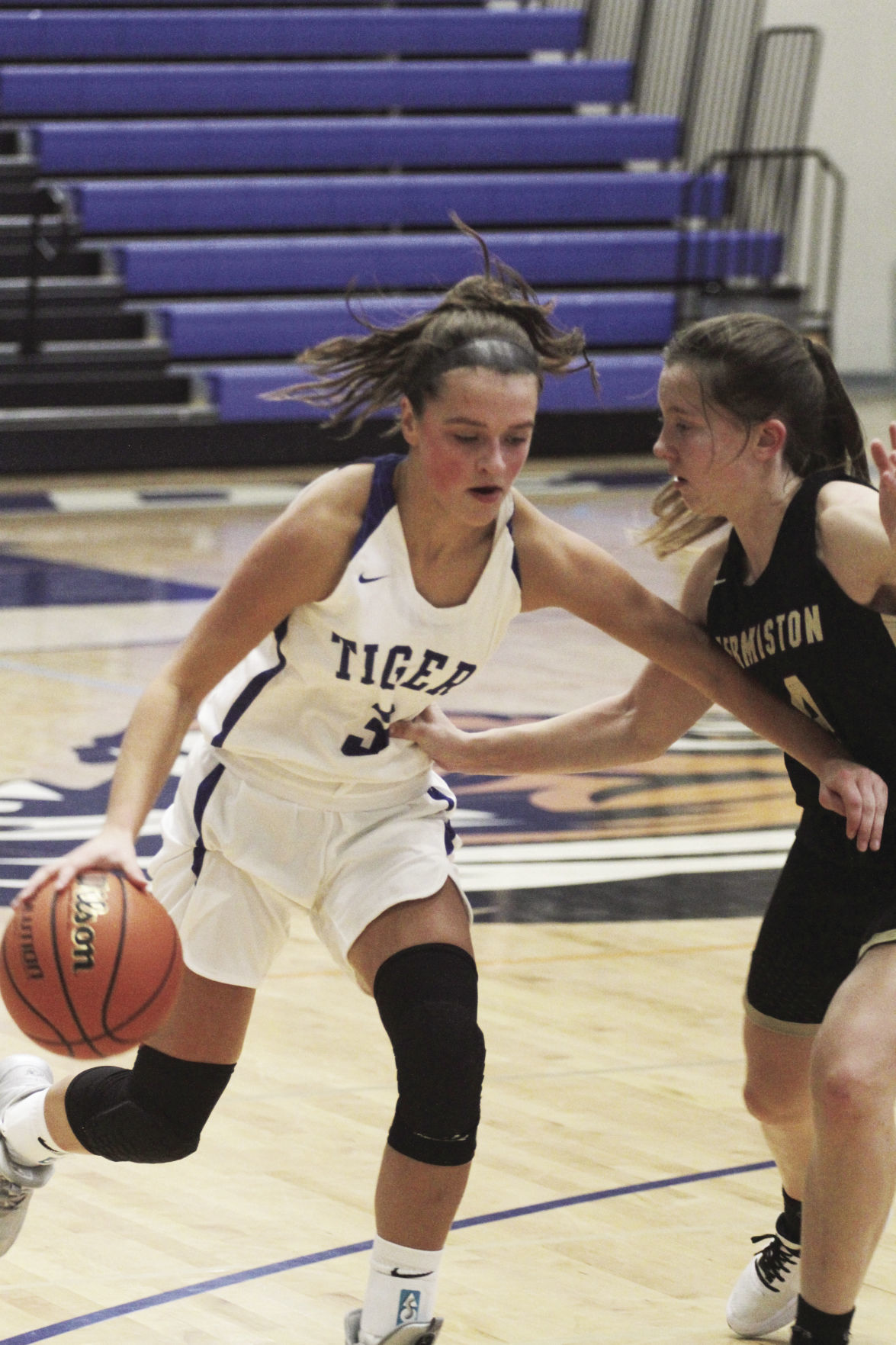 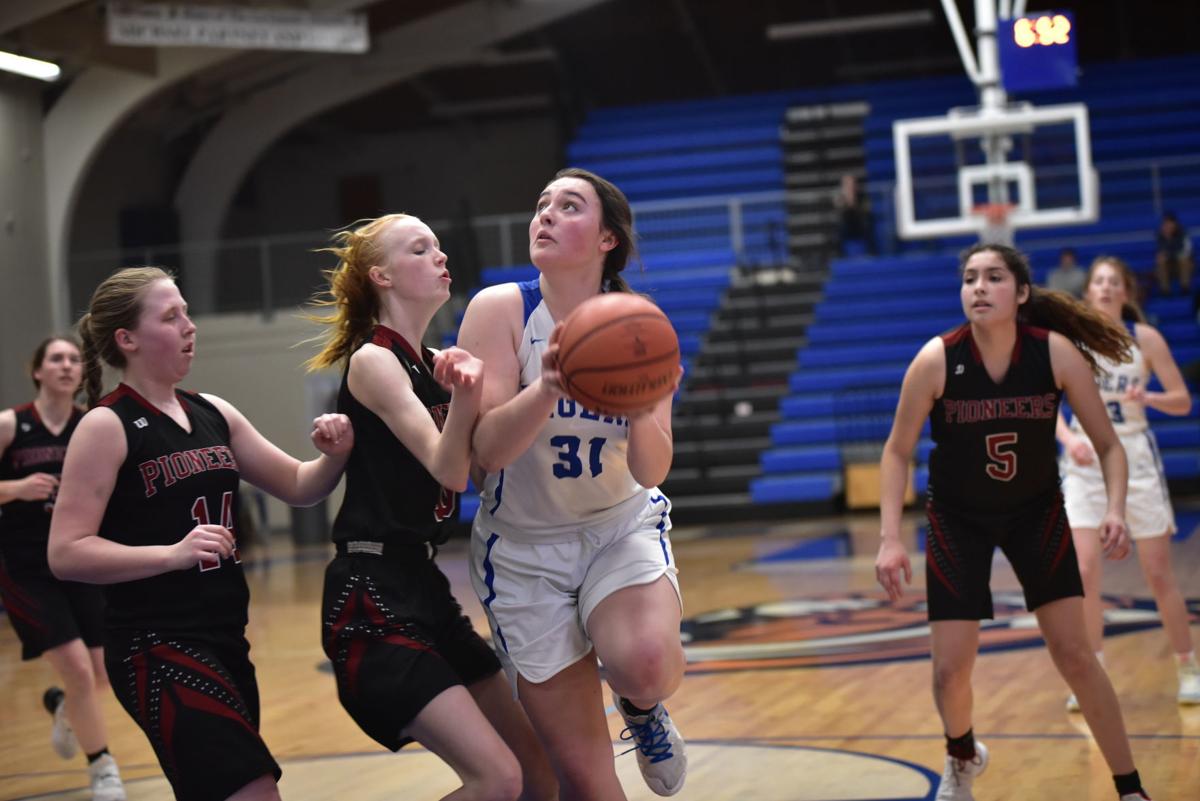 Joseph junior Sabrina Albee was named the 1A state player of the year along with Erin Counts of St. Paul and Kelsie Siegner of Crane.

Joseph’s Sabrina Albee surpassed both the 1,000-point and 1,500-point mark in her career this season.

Joseph’s Sabrina Albee was one of three players to share 1A state player of the year honors after she scored 20.3 points this season to go with 7.1 rebounds, 3.2 assists and 3.1 steals.

JOSEPH — An unprecedented vote resulted in an area basketball standout being selected one of the three best players in the state.

Joseph junior Sabrina Albee, who was instrumental in helping the Eagles girls basketball team to a fifth-place finish at the 1A state tournament, this week was named co-state player of the year along with two other athletes — Crane’s Kelsie Siegner and St. Paul’s Erin Counts. All three were unanimous first-team selections.

“Pretty interesting how it worked out, but it’s also a huge honor that every coach who voted had those three up there,” Joseph head coach Lance Homan said. “Quite an honor for all three for sure.”

Homan said Lynn Cowdrey, who has tabulated the all-state ballots for years, stated having a triple co-player of the year has never happened at the 1A level. Homan said he thinks they indeed are the top players in the state.

“I’ve watched them all play, so I would agree with those three,” he said. “I put them on my ballot. Those three do so much for their individual teams besides just scoring.”

Albee said it was “really cool” to not only be noticed by the rest of the 1A coaches in the state but to be in the same billing with Siegner and Counts.

“I have a lot of respect for those two. I love playing against them,” she said. “They’re another (level of) competition that makes each other better.”

Year to rememberFrom a statistical standpoint, Albee had a junior year to remember. The do-everything guard scored 20.3 points per game, and also had 7.1 rebounds, 3.2 assists and 3.1 steals per game. She scored 45.8% of the team’s points on the season.

And she also reached two major milestones in scoring. Early in the season, she surpassed the 1,000-point mark in her career, and before the season was done, she had moved past 1,500 career points.

They were marks, in fact, she wasn’t aware she had reached.

Her standout year — in which she scored 610 points — finished with her sitting at 1,598 points with still another year ahead.

“You have special kids who you have the opportunity to coach — a lot of different ones,” Homan said. “You love them all. Once in a while you get somebody like Sabrina, who just exceeds a lot of the players I’ve coached as far as her ability. Everything she brings is at an extremely high level.”

But perhaps the intangible that Homan has repeatedly touted Albee for is her demeanor.

“She hates having attention brought to her,” he said. “She’s so humble. She’s a team player. She’s just a great player all around. It’s not about her, it’s about the team. I’ve always appreciated that about her.”

Athletic pedigreeBasketball — and athletic ability in general — runs in Albee’s veins. Her aunt Kourtney Shreve played for the University of Oregon, and she said her father, Cameron Albee, was a good basketball player.

She developed a knack for the game early on, and said it was just the sport she gravitated to.

“Every day I’m shooting — I’m losing myself in the game,” she said.

She’s been a three-year starter for Homan, but that comes as no surprise once learning she started for the eighth-grade team — as a sixth-grader.

Maybe the only difference between then and now for Albee was size. Homan and Albee noted she was much smaller on the court.

“She definitely did her part and more. She was the same player, just little,” Homan said.

She’s grown into a player who seems to have limitless range, a high-end basketball IQ and exceptional court vision.

Albee said when she squares up for a long 3-pointer, she usually isn’t aware of where she’s launching from. It’s only afterward when she sees it on film.

“I don’t even realize how far back I am,” she said. “There are some shots I looked back on film and they are a crazy amount back.”

One of the plays that stands out to Homan on her ability to see the court came in the closing seconds of a game at the Old Oregon League District Tournament against Wallowa.

“We were down 1 or tied right at the end, less than 10 seconds, she steals it, gets two people double teaming her and underhanded it to Rylee (Wilcox) for a layup,” Homan said of what proved to be the winning basket in a game that sent the Eagles to the district title game.

She credits her passing ability and court demeanor to what she saw from a former rival.

“When I was a freshman we played against Nixyaawii a couple times and Milan Schimmel was incredible. She made these incredible passes,” Albee said. “She was vey nice on the court, and nice to my team. In competition people aren’t (always) nice on the court. You can be good (as a player) but nice at the same time.”

Blair grabs third-team nodPowder Valley junior Belle Blair was a third-team all-state honoree, a feat made more impressive considering the forward missed a significant portion of the season due to an injury. Blair played an important role in helping the Badgers turn around after a slow start and reach the second round of the state playoffs.

“She was a real impact player who could change games, and she did,” head coach Allen Bingham said. “She changed games for us. She’s a really talented player, really talented athlete.”

Bingham pointed to Blair’s competitive nature as a key intangible.

“She has a good not-give-up attitude,” he said. “She can really stay focused and keep playing hard.”

“He definitely put in the work and I hope he improves from there,” Joseph boys head coach Olan Fulfer said. “It was a really cool surprise.”

Fulfer said the surprise was due to the fact the Eagles played in just two games at state, but he pointed to Murray’s performance at state and in some early games that may have helped him get recognized.

“Chase had some monster games during preseason and had a great game against South Wasco (in the playoffs) as well,” he said.

They were key in helping the Tigers make it to the state tournament, though the coronavirus pandemic in early March cut short their hopes of contending for the state championship.

“That was a huge shock for us,” Collman said. “We were excited, we were getting ready.”

She also said she felt for the seniors because they “didn’t get closure on the last game.”

Collman said she didn’t even know if there would be an all-state team after the tournament was canceled. With she and Dunlap getting notoriety, Collman said she was “excited they did one and to be on the team, and excited that Ella was well.”