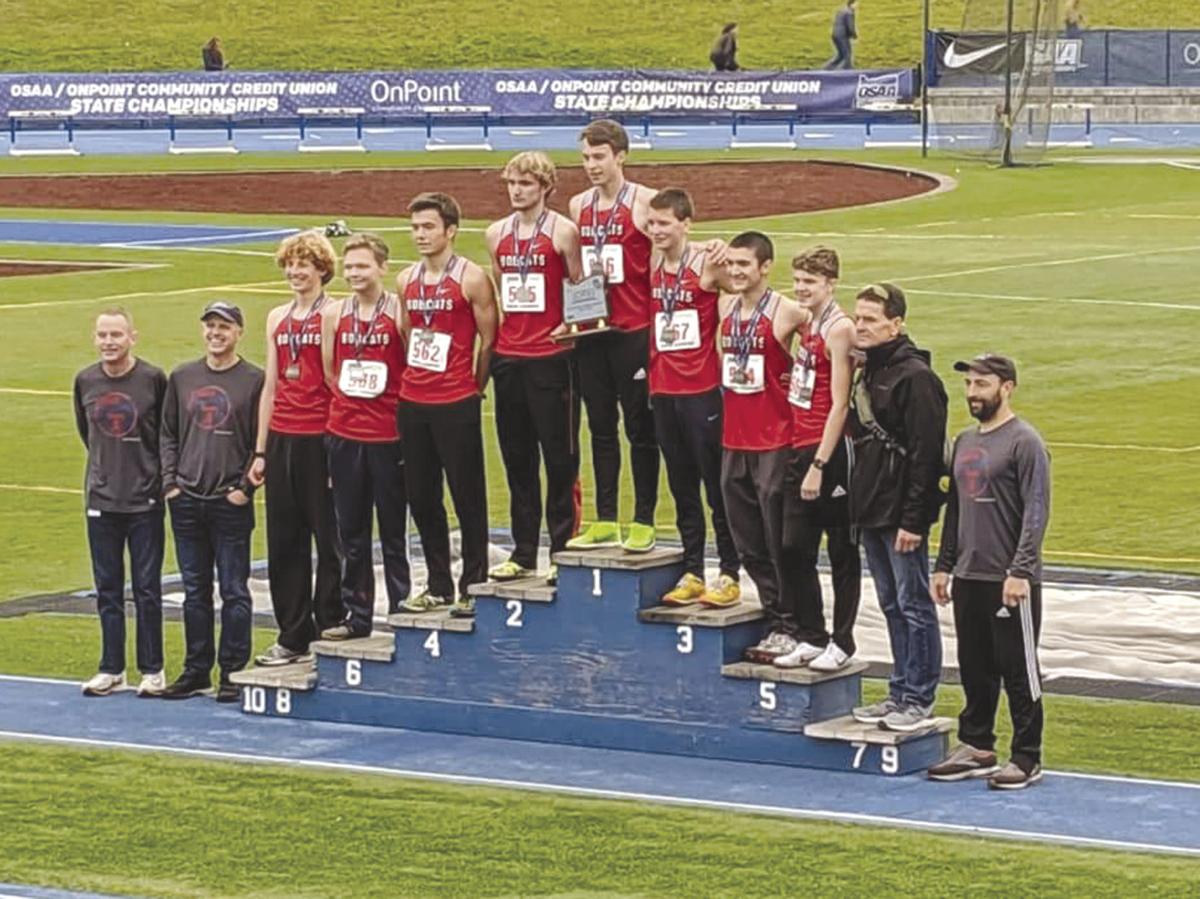 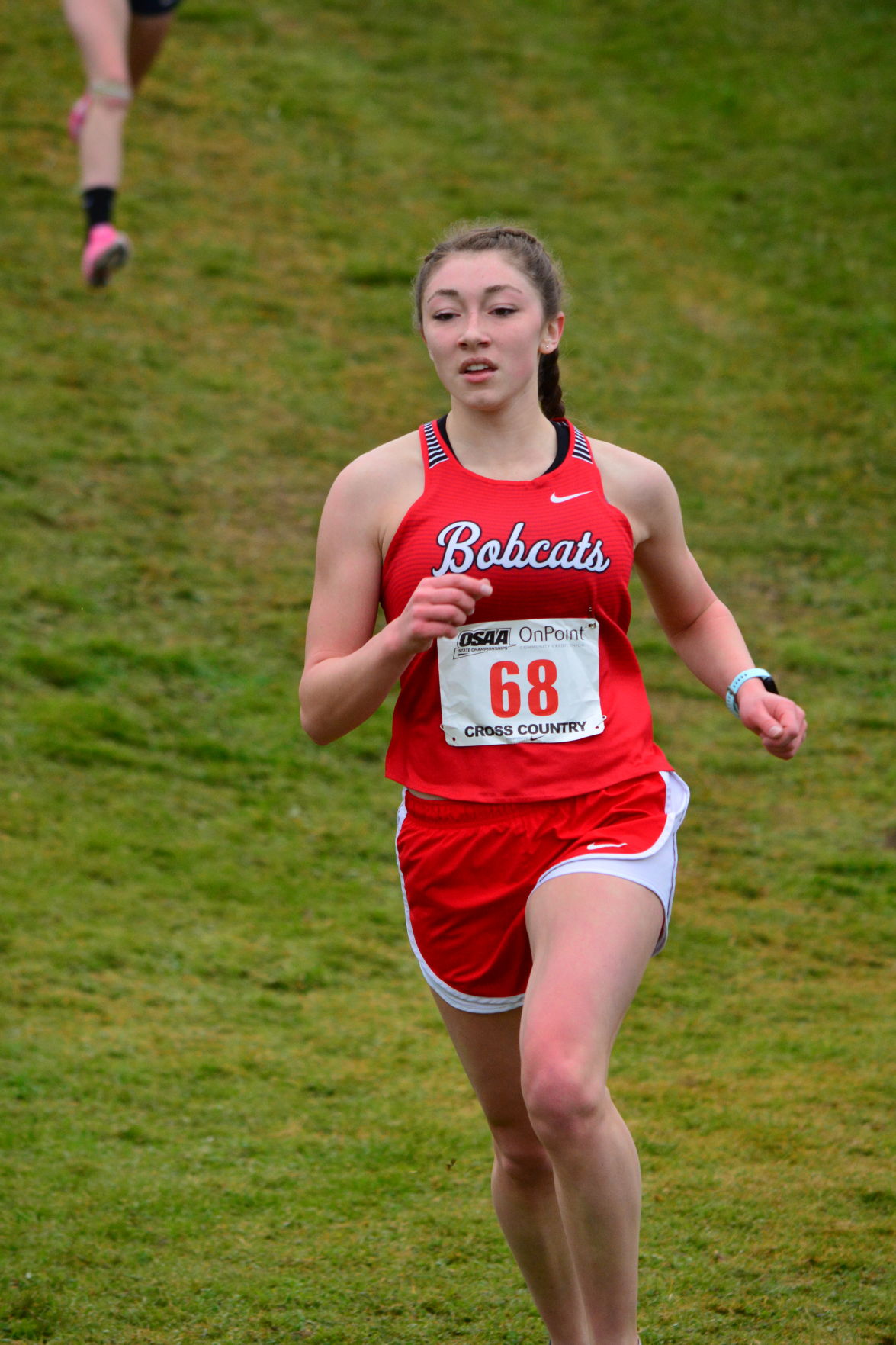 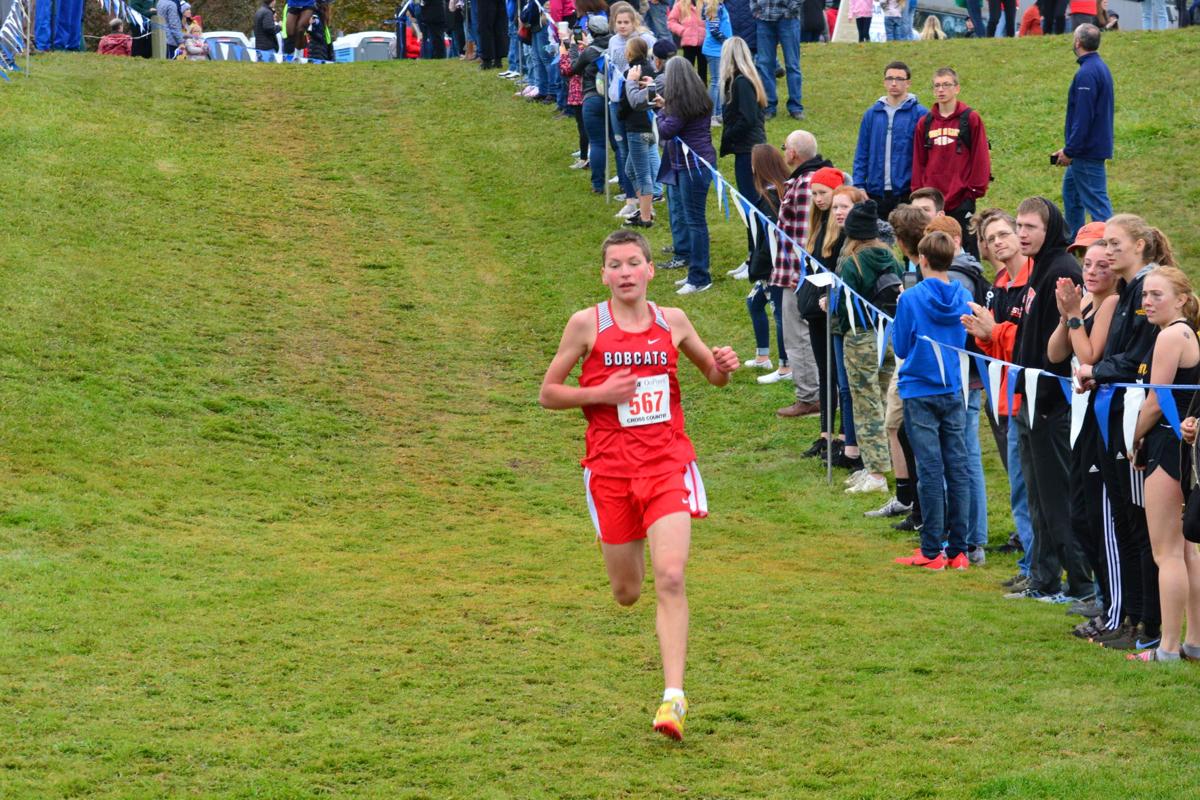 Israel O'Reilly, who placed 14th overall, helped Union/Cove to a second-place finish on the boys side in the 2A/1A race Saturday.

Israel O'Reilly, who placed 14th overall, helped Union/Cove to a second-place finish on the boys side in the 2A/1A race Saturday.

In the 3A/2A/1A girls championship, the Bobcats finished with 110 points in a distant second from state champion Burns, which won with 43 points. Catlin Gabel was third and Bandon was fourth with 121 and 122 points, respectively.

Union/Cove bested Bandon by just six points for second place in the 2A/1A boys race, finishing with 89 points overall. St. Stephens Academy ran away with the state title, finishing with 42 points and placing three in the top five, including individual champion Seth Bergeron.

To get it done, Sheehy said his team needed the type of effort you can give only a couple times each year.

For the girls team, Sheehy hadn’t expected they’d get that chance.

After struggling at the beginning of the season, the team had begun running better together down the stretch of the season, Sheehy said. But entering last week’s Special District 3 Championships, Union/Cove was ranked fourth behind Burns, Wallowa County and Heppner/Ione, which all topped the state rankings as well.

Needing a top-two finish to qualify the team for state, a gutsy performance last Friday got the Bobcat girls 76 points, just four ahead of Wallowa County, and second place.

The effort left Sheehy in tears.

“I’ve been coaching for 18 years. That was one of my top-five moments,” he said.

After the girls squad earned the unlikely opportunity to compete as a team on Saturday, Sheehy and the coaching staff put a plan in place to make the most of it.

Expecting Burns to be the heavy favorite for first place, the coaches identified the few teams they thought would be competing for second and focused their efforts on winning those individual matchups during the race.

“Since as coaches, we can’t focus on everybody in the race, we focused on who we thought was going to be the third and fourth teams and that’s where we put our efforts,” Sheehy said. “Coaches a lot of times are like ‘you can beat anybody on any day,’ but we took an intellectual approach to it.”

Senior Jaimee Baxter led the girls team with a sixth-place finish in 19 minutes, 32.3 seconds, while Audrey Wells, Danielle O’Reilly, Ashlee Burtch and Kaitlin Martens each finished in the top 50.

“I’m really, really happy for that girl,” Sheehy said of Baxter, who was racing in her first state championship after finishing sixth at district as a junior. “She is such a hard worker. She’s really a good team leader.”

On the boys side, freshman Taylor Fox paced the Bobcats with a ninth-place finish in a personal best 16:38.3. Senior Andrew Lackey just missed out on the

But after winning the last two team state titles — and three of the last four — the boys were hoping for a little more.

“Guys were a little disappointed because we were first the last two years,” Sheehy said. “But nobody was running with St. Stephens today. Maybe we run it again a different time we could get them, but today they were good.”

After another successful state championships and two more trophies for the Bobcats, Sheehy said much of it comes from preparing to peak at the right moment.

“Everything is preparation throughout the season except for district and state,” he said, noting that the runners may focus on hill running, positioning or other technical aspects at other meets. “We don’t go out every time and try to do our absolute best. It has to be saved for when it matters.”

Later on Saturday, the La Grande Tigers overcame injuries and achieved its season goal with two top-10 team finishes in 4A. The boys team finished ninth with 278 points, while the girls team was 10th with 204 points.

“They all ran the best race they could,” Tigers coach Alma Crow said.

Cristian Mendoza ran a season best 17:07.3 and was the top finisher for the boys at 36th. In total, five boys ran their season or personal best on Saturday.

Much like Union/Cove’s girls team, just qualifying for the state meet was an accomplishment for La Grande. Crow knew all year that finishing in the top two at last week’s district meet was going to be tough, so she spent much of the season preparing to peak then.

“I had to taper them off earlier than usual during the season just to get ready for that,” she said.

The district meet became that much more challenging for the girls when Martini got the flu just a day before and was unable to run. After taking a few days to recover — and looking gray throughout them, according to Crow — Martini impressed her coach with the top 20 finish on Saturday.

Just as impressive was the boys ability to recover from going all out last week to running a handful of personal-bests on Saturday.

“It just shows their determination and how hard these kids work,” Crow said.

Saturday also marked the end of Vandervlugt’s time in Crow’s cross country program, which she’s been a part of since seventh grade.

“It’s hard. She’ll be the runner to leave a huge footprint on this program,” Crow said. “It’s just going to be weird not having her around the team. She brought such a positive and calming energy. She’s the core of my team. When the girls were down the slope, she’d be the one to get them back up.”

But as the Tigers say goodbye to Vandervlugt, Crow expects to welcome in a talented crop of freshmen from the middle school program. And with nearly every other member on both teams set to return, this year’s top 10 finishes may be the launching pad into a bright future.

“It just means our program is going to get better and better,” Crow said. “I’m really excited about next season.”