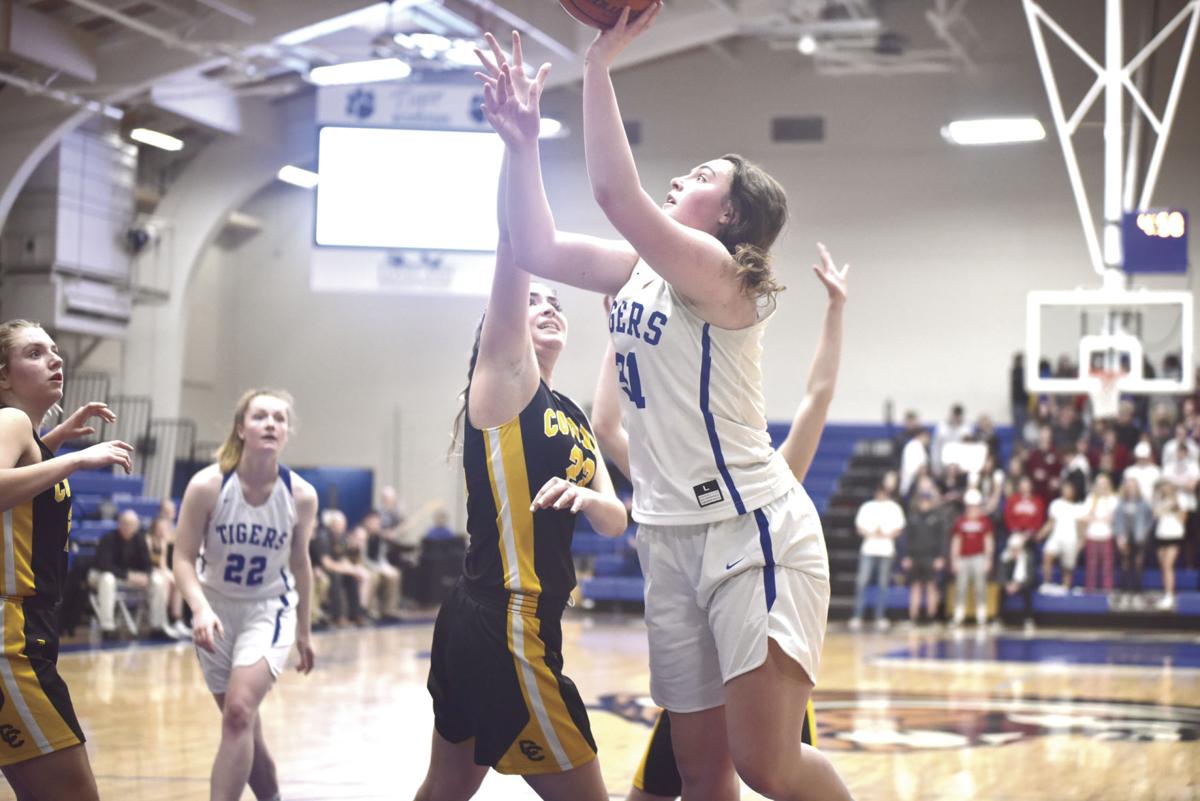 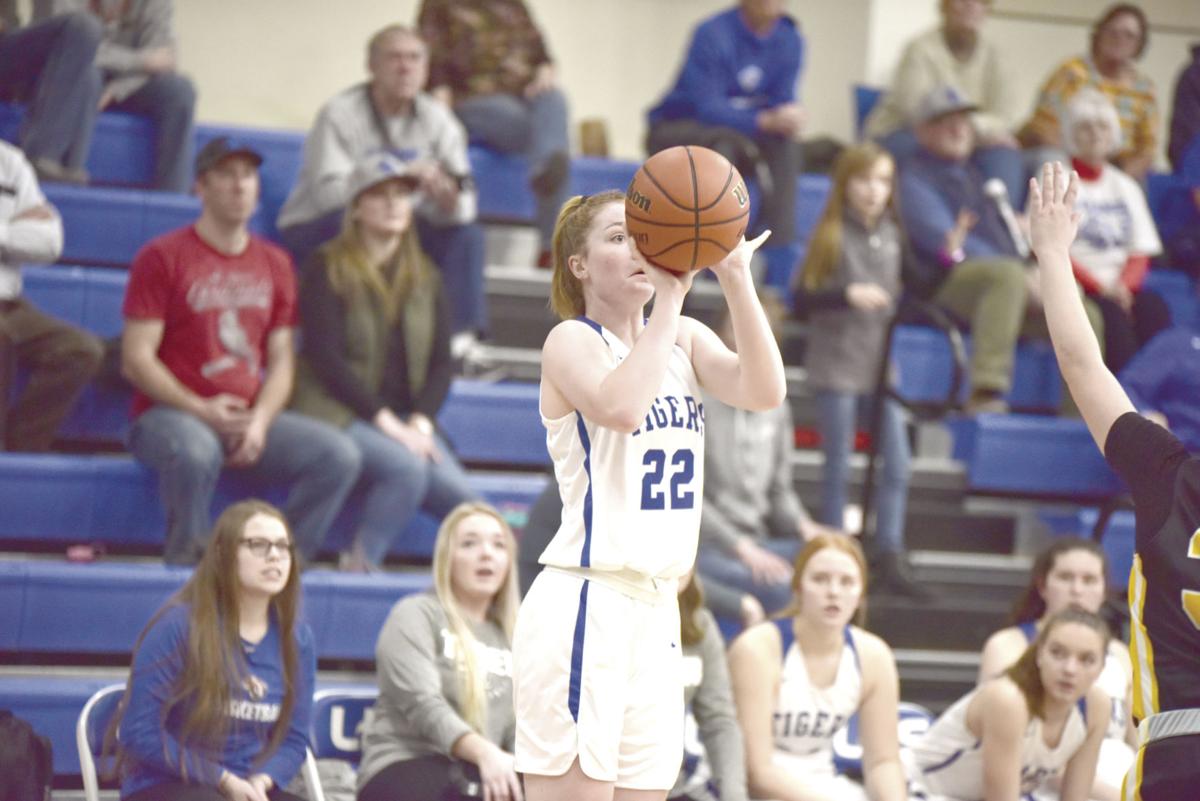 La Grande's Grace Neer shoots during the second half Friday against Cascade. Neer scored 10 points in the Tigers' playoff win. 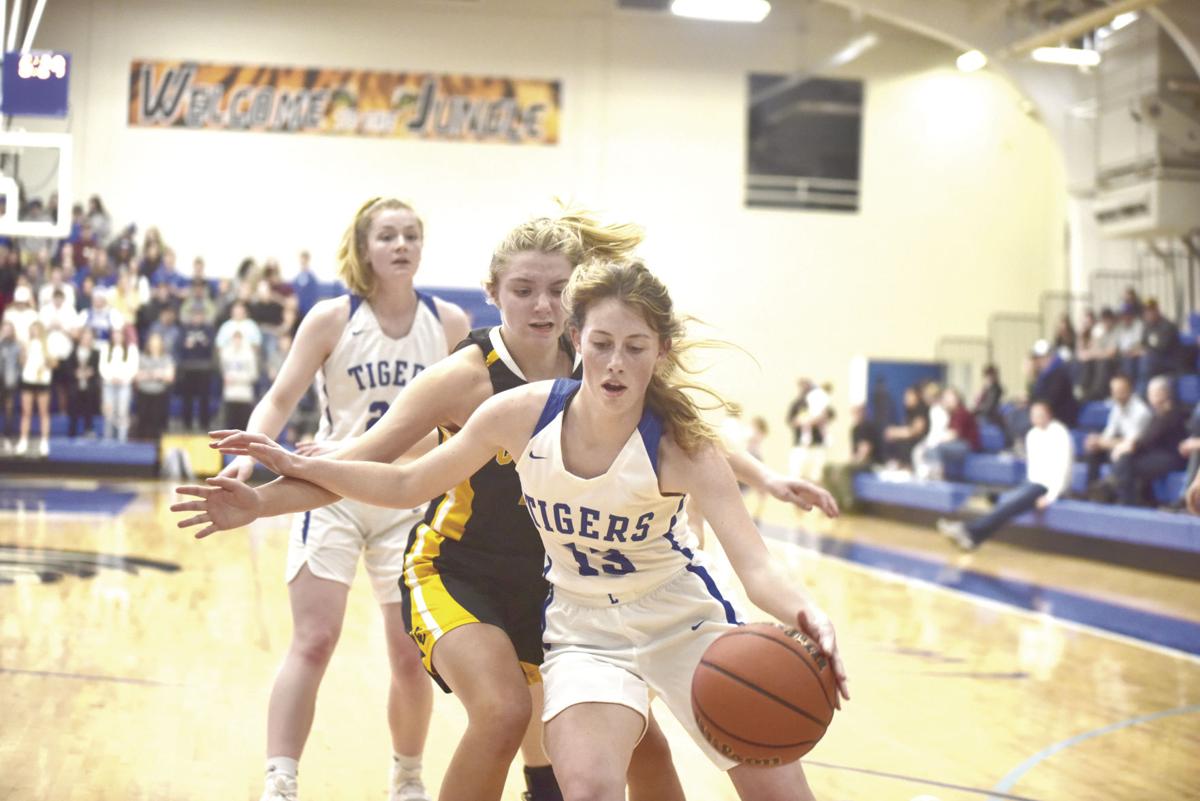 La Grande's Alexyss Chamberlain, with ball, drives along the baseline Friday night. The Tigers topped Cascade, 52-46, to reach the 4A state tournament. 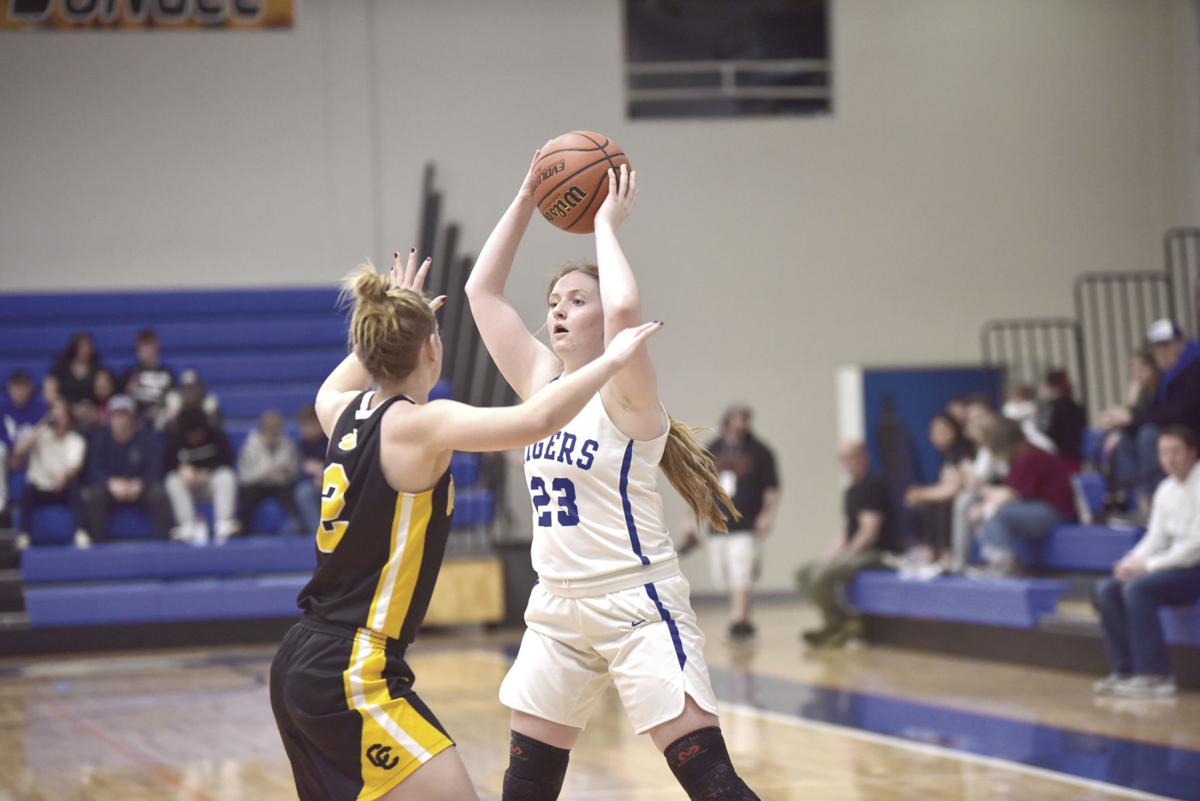 La Grande's Kenzie Williams, right, looks for a teammate to pass the ball to Friday night against Cascade. 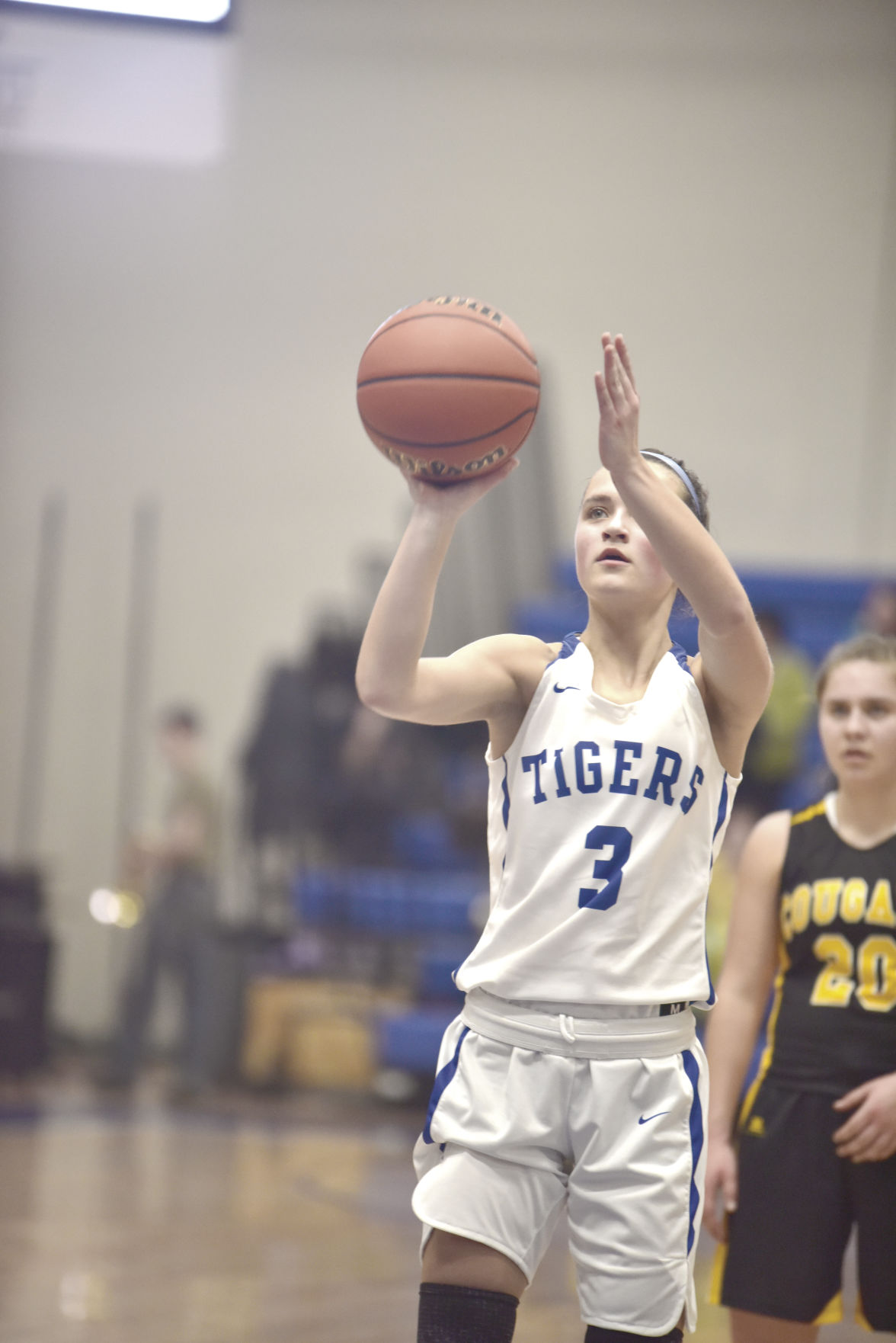 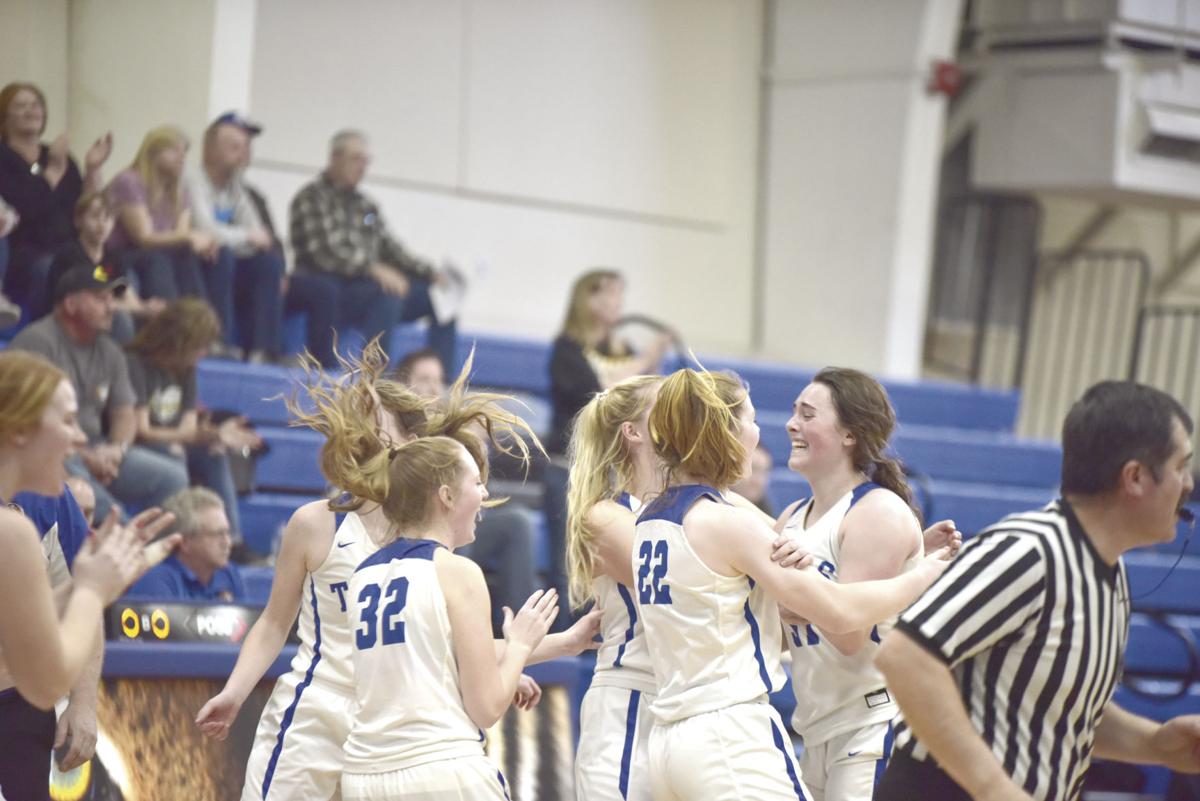 The La Grande Tigers celebrate Friday following their 52-46 win over Cascade, which sent them to the 4A state tournament for the first time in four years.

La Grande's Grace Neer shoots during the second half Friday against Cascade. Neer scored 10 points in the Tigers' playoff win.

La Grande's Alexyss Chamberlain, with ball, drives along the baseline Friday night. The Tigers topped Cascade, 52-46, to reach the 4A state tournament.

La Grande's Kenzie Williams, right, looks for a teammate to pass the ball to Friday night against Cascade.

The La Grande Tigers celebrate Friday following their 52-46 win over Cascade, which sent them to the 4A state tournament for the first time in four years.

LA GRANDE — It didn't matter where Ella Dunlap shot from Friday night, it felt like everything she put up was going to go down.

And her offensive output helped push the La Grande Tigers to the state quarterfinals for the first time in four years.

"It's amazing. I love it," Dunlap said of the state tournament berth. "I love to be a part of it. I'm so excited."

The junior post scored 27 points and added nine rebounds — at one point scoring 18 of the Tigers' 19 points during the second and third quarters — as La Grande slipped by Cascade in the first round of the state playoffs, 52-46.

"I think we wanted it more than Cascade and we pushed harder," Dunlap said. "We had it in us."

Grace Neer added 10 points — all in the first quarter — and hit a pair of early 3-pointers to spark the Tigers' offense.

"Really pleased with the effort tonight," head coach Brian Wright said. "Kids came off the bench and gave us big minutes. Who would have thought Grace would come in and hit two 3s?"

It was Dunlap, though, who took over in the middle quarters to help give La Grande a double-digit advantage.

Dunlap scored inside — dominating on the low block with an array of post moves or crashing the glass for an offensive rebound — and outside, draining several 15-to-18-foot jumpers from the top of the key. Her rebound and putback midway through the second put La Grande ahead 25-20 — at the time its largest lead — and her short jumper just before the half made it 28-27 Tigers at the break.

In the third, Dunlap put in a layup and a long jumper to push the lead to five, then had a free-throw line jumper and a lefty basket inside to make it 36-29.

"She was a monster down around the basket, and Cascade knew that," Wright said. "They watched film, but they had her pegged as only a low post player, so they were defending the low post, so she was stepping out to the high post and we (would) run that little triangle, and tonight she was on. Those shots were going in. That made them change their defense."

A rebound and putback from Lauran Rinker and a long jumper from McKaylee Orton in the final minute put the Tigers up 40-29 after three, and Orton's 3-pointer to open the scoring in the fourth gave La Grande its largest lead at 14.

The Cougars chipped away, getting within 43-36 on an Abbigail Cordero layup, and getting the margin down to 47-41 on a steal and layup from Kenna Coleman with 2:17 to play.

But a layup from Camryn Collman — just her second field goal of the game — with 1:22 to play pushed the lead back to eight, and Cascade got no closer than six the rest of the way.

The teams got off to a slow start, then heated up, trading the lead six times in the first quarter alone, with Neer's second 3-pointer of the quarter putting La Grande ahead 13-11.

"I just kind of was like, if I don't shoot it, I can't make it, so why not?" Neer said of taking the early 3s, which typically are not in her repertoire.

Bailey Pedersen's 3-pointer with about a minute to play in the first put the Cougars up 16-15, but Neer beat the buzzer with a jumper that put the Tigers ahead before Dunlap took over.

Collman and Orton both added five points for La Grande. Cascade was led by Camryn Boyles and Cordero, each of whom scored 13 points.

The Tigers (18-7 overall) will face Astoria at 3:15 p.m. Thursday in the quarterfinals in Forest Grove.