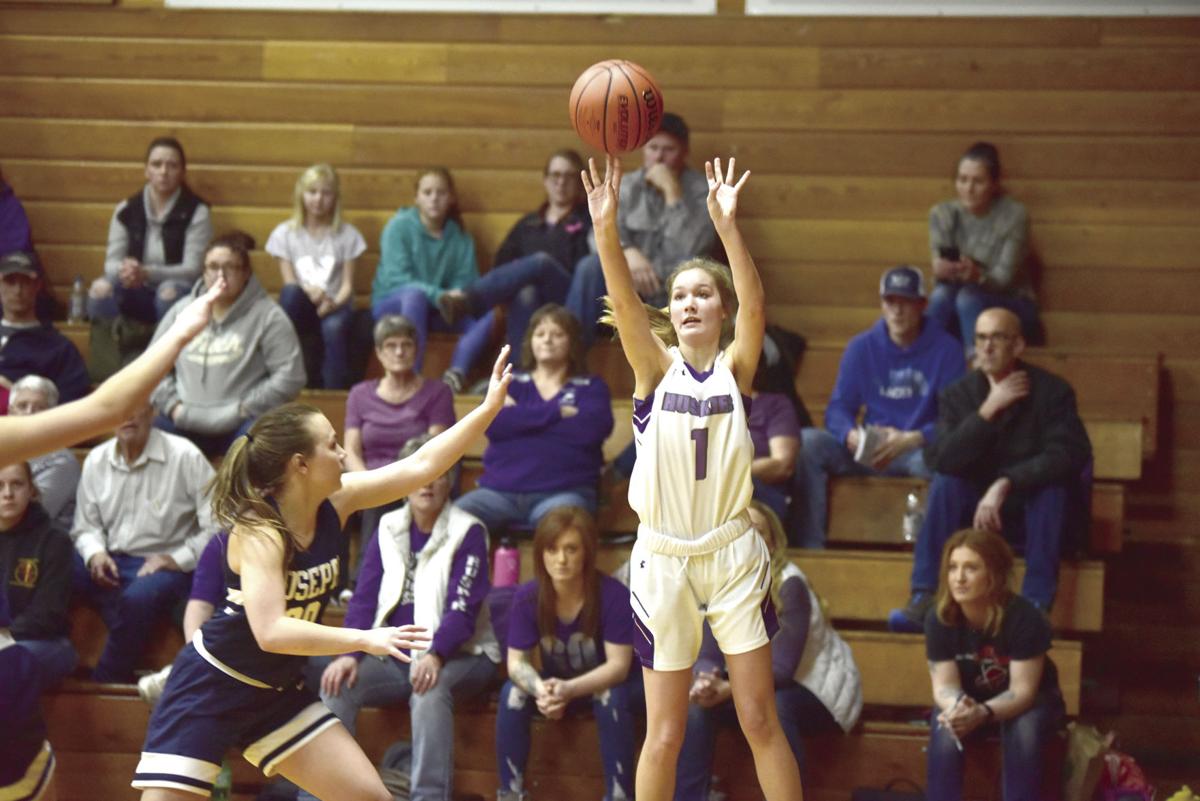 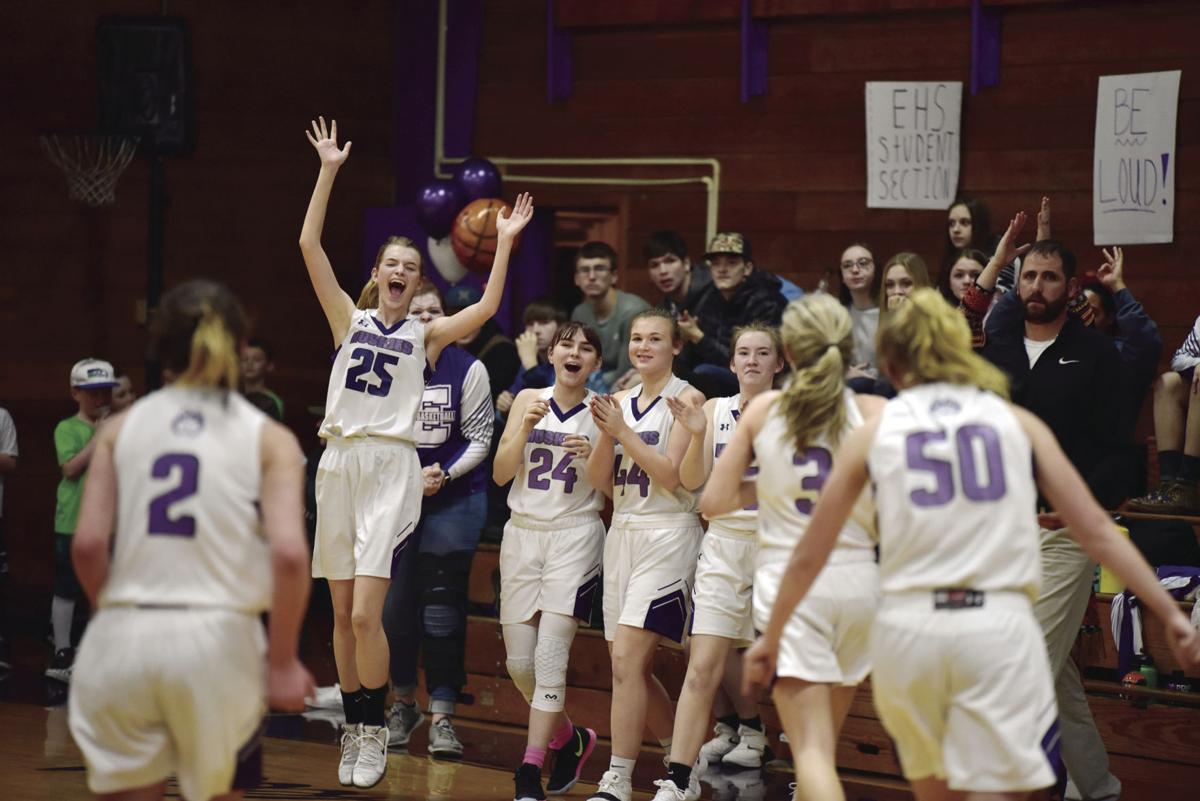 Erika Adams (25) leads celebration at a timeout Saturday during Elgin's 53-41 win over Joseph. The win moved the Huskies into first place in the Old Oregon League.

Erika Adams (25) leads celebration at a timeout Saturday during Elgin's 53-41 win over Joseph. The win moved the Huskies into first place in the Old Oregon League.

ELGIN — Jayden Palmer turned in a senior-night performance Saturday nobody in Elgin will forget anytime soon. The Huskies’ other senior, Tymra Anderson, had a solid night, crashing the glass and scoring timely baskets.

The end result was the duo helping the Elgin girls basketball team to the program’s biggest win in more than two decades.

Palmer hit six 3-pointers and finished with 30 points, Anderson had a double-double and the Huskies used a dominant third quarter to take over the lead for good on the way to a 53-41 home win over Joseph that leapfrogged Elgin over Joseph into first place in the Old Oregon League.

“I’m so proud of the girls,” Elgin head coach Brian Evans said. “From the get-go, they played their hearts out, and that’s what I asked them before the game, to play with this game with heart, and they showed up and did it. Super proud.”

The win was the latest — and most important — in what has been a transcendent season for Elgin, one that has seen the program put behind it a run of on-court struggles that has lasted nearly two decades. The Huskies, who are seeking their first playoff berth since 1996, earned the program’s biggest victory since that ‘96 squad won the district tournament on the way to the 2A state playoffs.

“It feels amazing, and it’s awesome knowing I can be a part of it,” Palmer said.

The highly entertaining contest, which was full of lead changes, scoring runs and scrappy defense by both teams, turned in the third quarter when Elgin shot the lights out, crashed the boards and frustrated the Eagles’ offense.

Palmer, who had already scored 15 points in the first half, scored the first five points of the third with a putback and a 3-pointer 80 seconds apart to put the Huskies up 26-25.

“I knew it was a big game for us, and to never give up and play my best,” Palmer said. “I played my hardest tonight.”

Anderson followed with two rebounds and putbacks later that gave Elgin a 30-25 lead midway through the third before Joseph’s Sabrina Albee drained a long 3-pointer seconds later to cut the margin back to two.

That trey was the only basket Joseph hit in the third.

Elgin scored the final 10 points of the period. Palmer countered Albee’s triple with another of her own. Anderson converted a 3-point play and Kaelin Evans scored inside to push the margin to 10 before Palmer scored her 10th point of the quarter to give Elgin a 40-28 lead and cap a quarter that saw Elgin shoot 50% (8-for-16).

“I thought they were aggressive, they took shots, and they’re a good basketball team,” Joseph head coach Lance Homan said of Elgin. “We left them open and they hit them.”

Elgin also dominated the boards, outrebounding Joseph in the third 15-6. The Eagles, meanwhile, were unable to buy a basket in the third — sometimes due to Elgin’s defense forcing tough shots, but also at times due to shots simply not staying down. Joseph was just 1-for-14 shooting in the third.

Brianna Micka opened the fourth by banking in a 3-pointer to pull Joseph within nine, but that would be as close at the Eagles got the rest of the way. Palmer’s seventh and final 3-pointer with 3:19 to play gave Elgin its largest lead at 46-32. Albee hit two 3-pointers in the final two minutes that both cut the margin back to nine, but the Huskies had a response each time.

Anderson finished with 12 points and 16 rebounds, with all but one of her field goals coming on putbacks. Six of her rebounds were on the offensive glass. Elgin on the night shot 41%, and was at 48% through three quarters, which helped offset Elgin’s 32 turnovers. The Huskies also had a 47-28 advantage in rebounding.

Albee finished with 14 points to lead Joseph, and Camille Crenshaw added 11 points, including 10 in the first quarter. The Eagles, though, shot 25% and turned the ball over 24 times.

The Huskies responded with a 10-0 run started and finished by 3-pointers from Palmer. The teams were never separated by more than four points the rest of the half, as they jockeyed back and forth until the break with Joseph leading 25-21.