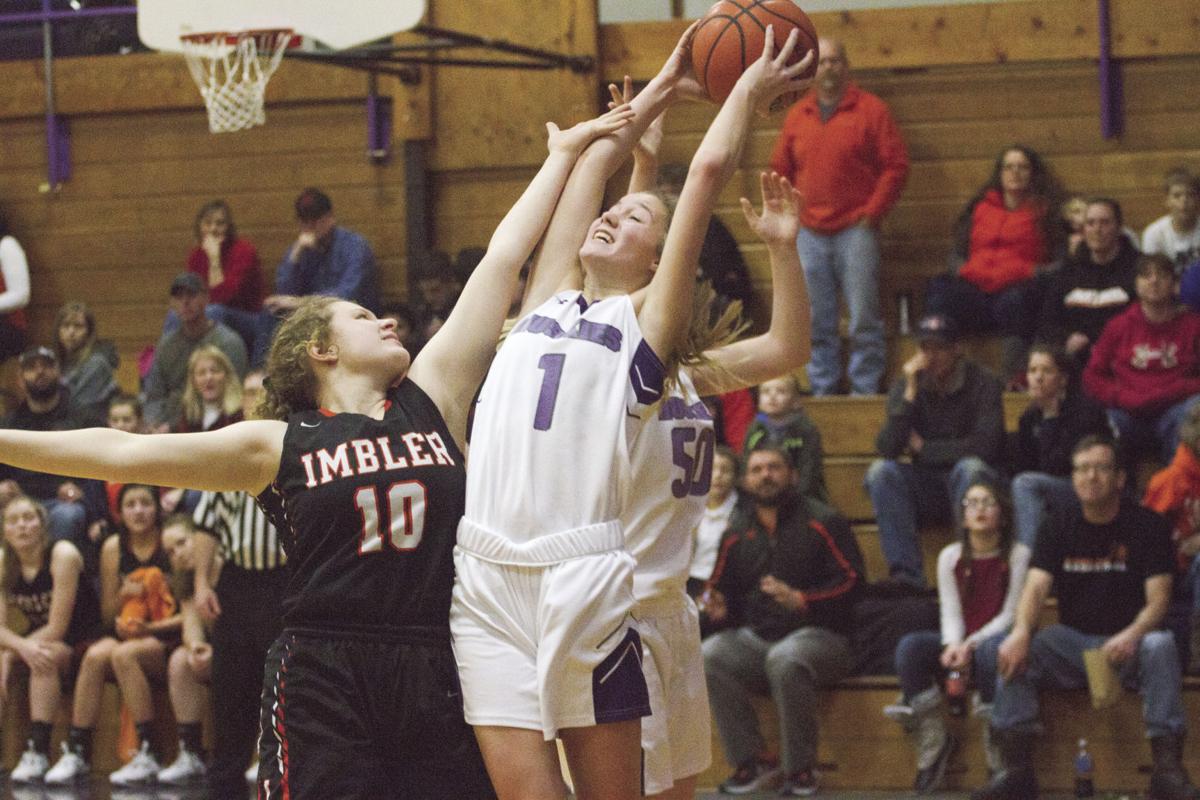 Elgin senior Jayden Palmer (1) reaches for a rebound Saturday in the Huskies’ game against Imbler. Palmer and the Huskies are off to an 11-2 start this season and are in the midst of their best season in nearly 20 years. 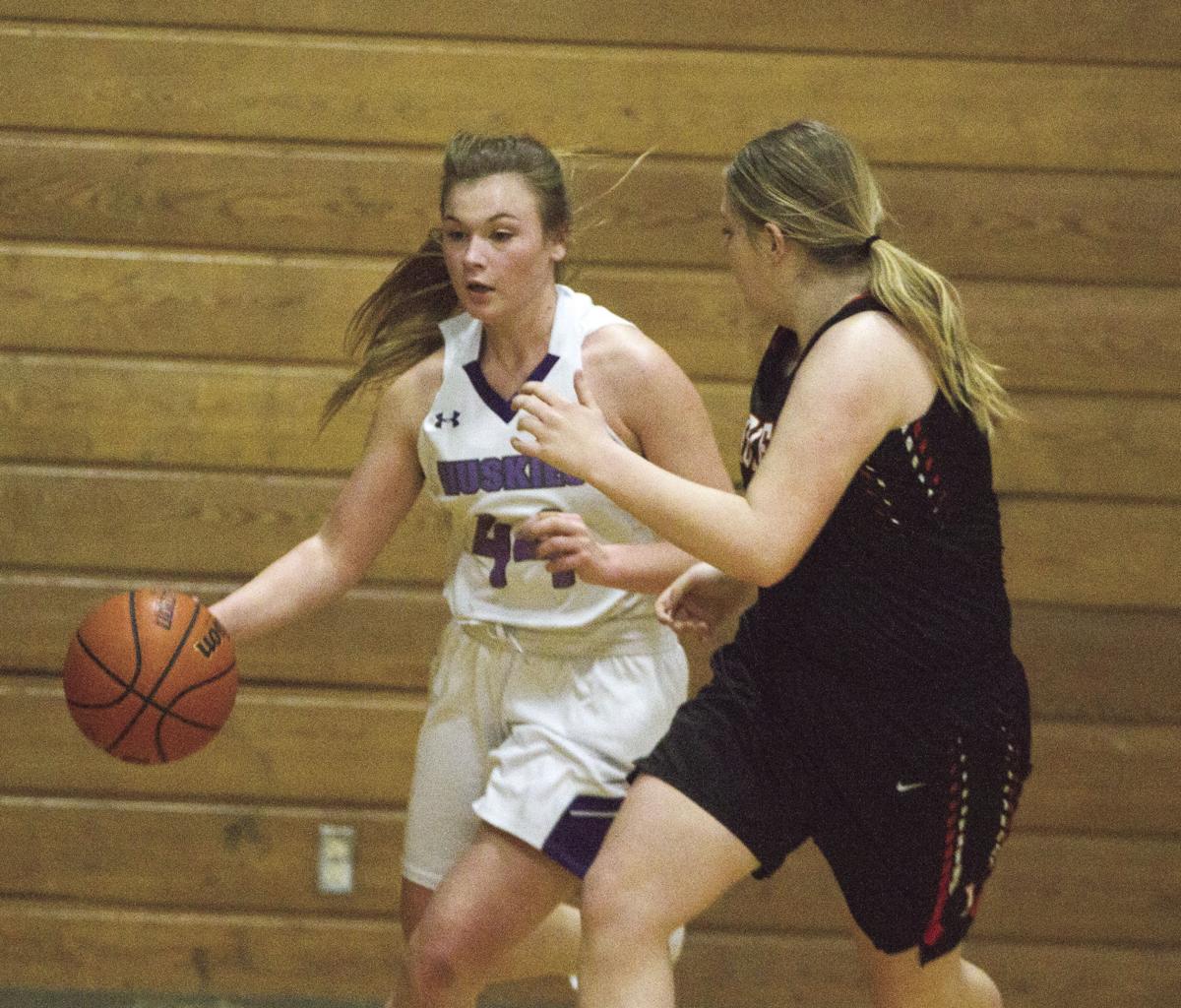 Maddie Larman, left, and the Elgin Huskies are first in the Old Oregon League.

Elgin senior Jayden Palmer (1) reaches for a rebound Saturday in the Huskies’ game against Imbler. Palmer and the Huskies are off to an 11-2 start this season and are in the midst of their best season in nearly 20 years.

Maddie Larman, left, and the Elgin Huskies are first in the Old Oregon League.

ELGIN — Not a single member of the current Elgin Huskies girls basketball team was alive the last time the program had a record above .500.

That season, the Huskies finished with a record of 13-9 and fell one win short of a berth in the 2A state tournament.

The Huskies’ current winning streak of seven games surpasses win totals in five of those seasons, and this season appears to be on a much different trajectory. Tuesday’s 54-15 win over Griswold moved the team’s record to 11-2 and gave Elgin a 3-0 mark in the Old Oregon League, which is good for the top mark entering play Friday. Elgin is one victory away from guaranteeing a winning record and two wins shy of matching the 13 victories set by the 2000-01 team.

“It gives me so much inspiration to look back on where we started from my freshman year till now,” said Tymra Anderson, one of two seniors on the squad. ”It truly makes me believe anything can happen if we want it to. We can connect and work together. We can accomplish a goal.”

Elgin had already seen improvement from the 2016-17 season when Anderson and Jayden Palmer, EHS’s other senior, were freshmen. That team won just four games, and Anderson admitted the players carried a mindset onto the court — likely the results of the previous years' struggles — that left them defeated even before tipoff.

“Our big thing was our mentality,” she said. “We went into games feeling helpless because we knew we were going to lose, and we lacked the players and the skills. We struggled with it. My sophomore year was kind of the same way. The mentality was not a winning mentality. And we did struggle. We had that negative mentality.”

Palmer said many of the players on the team, as a result, would show up but didn’t seek to win.

Palmer added the players often heard that the other teams always assumed they would win whenever they played Elgin.

“We were the team that everybody could beat,” she said. “It was hard. That definitely had an impact on our mindset, and I think that’s what got to us — why try when everybody knows we’re going to lose.”

Brian Evans, who was in his first season as the head coach last winter after two seasons as assistant coach, said the losing mentality was one that permeated back to when he was in school in the 1990s. It carried over because, as a result, the “kids (didn't) know what it takes to be a winning team. It all comes into play. Up until this year, they didn’t have the hunger and the drive.”

Even last season in his first year leading the program, the team would struggle with how to respond when it was tested.

“A little success here and there, but when times got tough they would break,” he said.

There were not any seniors on that team, though, and with all the key players returning for the upcoming season this year, there was a belief that this season could be different.

To get the players to buy in, Evans said, he had to emphasize on a consistent basis that they could break through the mentality and win, and he had to sell team basketball.

“Last year I tried pushing the team concept on them heavy, and toward the end of the year they picked up on that,” he said. “This year they picked up where they left off. That's been my biggest push as far as a coach. (Assistant coach) Ashley (Knight) has played a big part, and my volunteer coach Doug Durfee — they back me 100%.”

Palmer said team-bonding sessions, discussions and staying together as a team have aided in the culture change.

“To overcome we really had to have a team heart-to-heart and talk to each other,” she said, and the message became: “If you’re not willing to give if your best and your all, you shouldn’t even be here.”

Evans and Anderson both also noted that many of the players on the current roster have several years together on the court, which has added to the continuity.

“We’ve all played together since seventh grade. We know how the players work,” Anderson said.

On the court, the team has shown depth and talent at multiple positions. Three players — the two seniors and Jocelyn Palmer — have scored at least 20 points in a game this season, and several others can get into the scorebook when needed. Evans said the team’s ability to have players step up when needed is its strength.

“We were missing Tymra for one or two games and girls stepped in and picked up the slack,” he said. “My youngest daughter’s (Gracie Evans) arm is broken, and we’ve had other girls step in and fill that role. We haven’t missed a beat.”

Evans said the Huskies’ 46-44 win over Grant Union in the second game of the season was an important early one for the team.

“We didn’t blow them out of the water. It was a game we had to stick together,” he said. “I feel that was a big win for us. We haven’t beat Grant Union as long as I’ve been coaching. That was a big confidence booster right out of the gate.”

The coach added that as a team, they talk a lot about the goals they have for this season.

“I tell them over and over what my expectation are, what I believe they can do. In doing that I hope it gives them the confidence and the will. At least once a week I tell them what I expect and what could happen,” he said.

Those expectations go far beyond just finishing with a winning record.

Elgin is also eyeing a berth in the state playoffs, which the program has not reached since 1996. That team finished with a 20-6 record and clinched the second of back-to-back state berths, with an 18-8 team that dropped the third-place game in 1995.

“My goal for this team is to take them to state this year, and that's not out of reach by any means,” Evans said.

Anderson added the team has a desire to do its school justice and make the community proud.

“We have the talent and we have the players,” she said. “We are truly a team this year, and I feel like we’re going to build off of that.”

And for the seniors who endured the struggles since their freshman year, a trip to Baker City in early March for the state tournament would be an amazing sendoff.

“I want to take it to state. It feels like we can do it,” Palmer said.