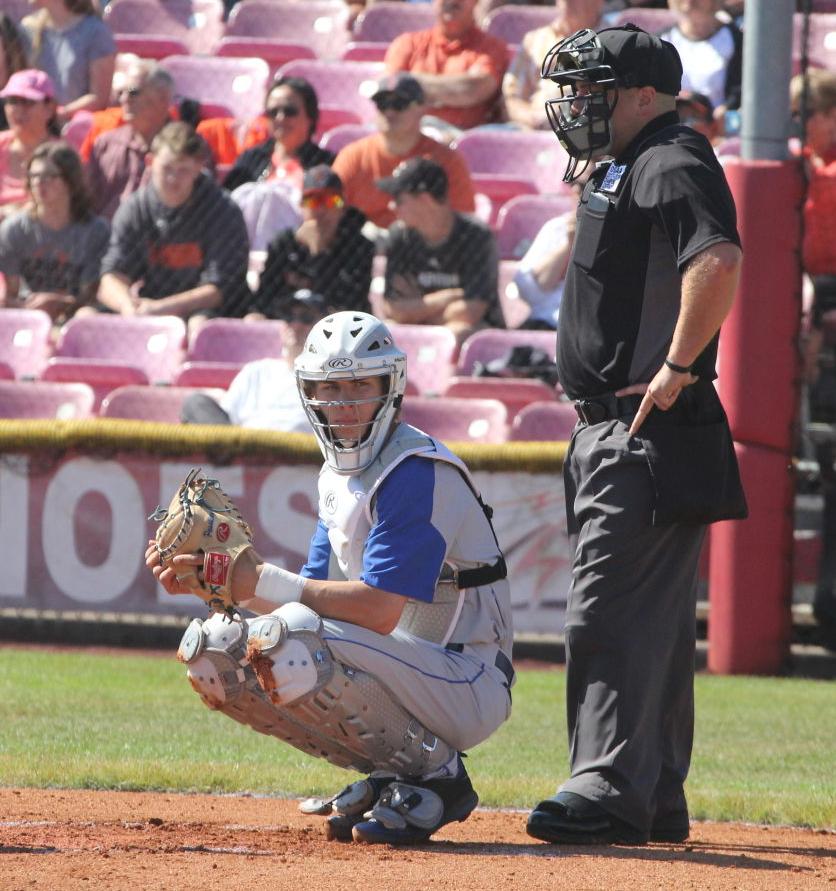 Logan Paustian is shown during the 2018 state championship game in Keizer against Gladstone. Paustian, one of the nation's top-rated catchers, has signed his letter of intent to play baseball with Arizona State University. 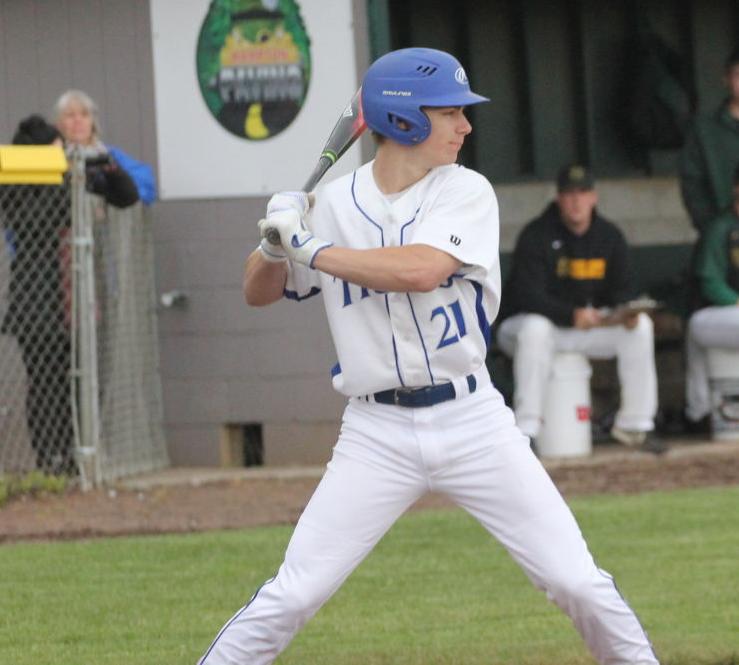 La Grande's Logan Paustian is shown during the Tigers' playoff game against Sweet Home in May. Paustian, one of the nation's top-rated catchers, has signed his letter of intent to play baseball with Arizona State University. 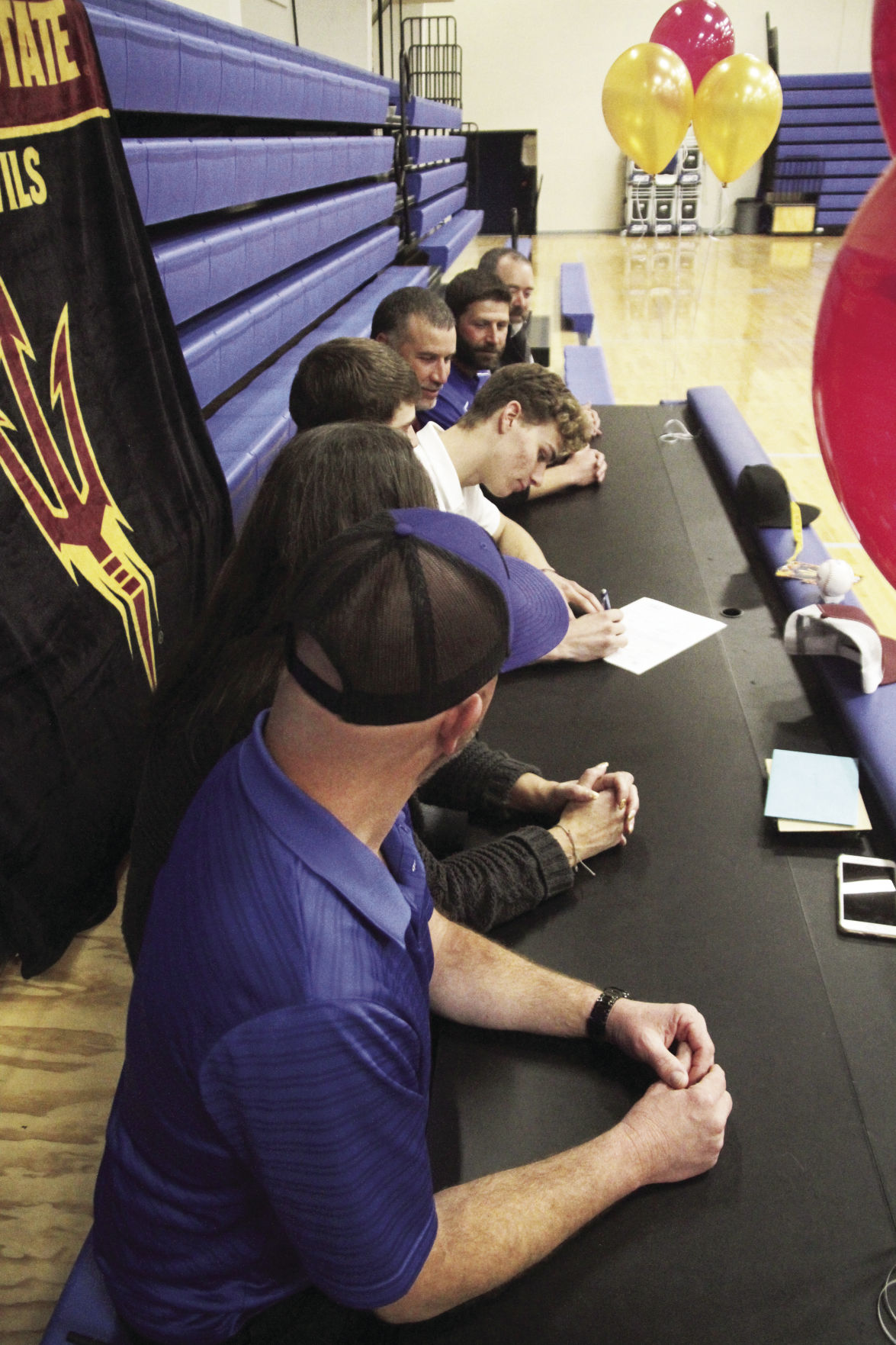 Logan Paustian signs his letter of intent to play baseball at Arizona State University during a Nov. 13 ceremony at La Grande High School.

Logan Paustian is shown during the 2018 state championship game in Keizer against Gladstone. Paustian, one of the nation's top-rated catchers, has signed his letter of intent to play baseball with Arizona State University.

La Grande's Logan Paustian is shown during the Tigers' playoff game against Sweet Home in May. Paustian, one of the nation's top-rated catchers, has signed his letter of intent to play baseball with Arizona State University.

Logan Paustian signs his letter of intent to play baseball at Arizona State University during a Nov. 13 ceremony at La Grande High School.

An injury that cost him most of his junior year on the baseball field and seeing the head coach leave the school where he had already committed — Nebraska — caused Logan Paustian to take a step back.

Once he finished rehabilitation and reentered the recruiting process, the La Grande senior found a school he said “suits my personality,” and last week, Paustian signed his letter of intent to play at Arizona State University.

“It was kind of a freak out moment there,” he said of the fallout from a torn labrum in his right shoulder and the departure of then-Nebraska coach Darin Erstad. “But I was able to get my composure, do my rehab, and get back in the recruiting process. Luckily I still had contact with a lot of the coaches that had recruited me before. I went through schools. I went to Oregon State, went to Oregon, looked at my options, and Arizona State was the best fit for me.”

Paustian has long been one of the top-rated high school catchers in the nation. ASU’s Twitter feed, in announcing his signing, said he’s the fifth-ranked player in the state of Oregon, and the 33rd ranked catcher in the country. He ranks anywhere from the 71st percentile to the 93rd in various metrics on perfectgame.com, which rates high school baseball players.

Parker McKinley, La Grande’s head baseball coach, said it was apparent from as early as 10 or 11 years old that Paustian was a talent behind the plate.

But he didn’t taper off.

“As Logan started to get older, 12, 13 14, he didn't stop progressing,” McKinley said. “He got better, smoother, faster, and started to handle the ball in a way that was more common for someone that much older than him. As a freshman he received the ball as well as most juniors and seniors.”

The coach said Paustian reached where he is, though, not just because of natural talent.

“All this is not just because it came easy. He worked super hard,” McKinley said. “He had all these things I’m place. It was natural for him, he loved it and he really worked is rear end off to make himself get better and better.”

Paustian committed to Nebraska when he was a freshman in high school. The injury he suffered following his sophomore year didn’t deter the Cornhuskers, but Paustian decided it was time to look elsewhere when Erstad left.

“They upheld my scholarship and said, ‘We’re going to wait on you,’ but about a month and a half later the head coach decided he was ready to be done, and he was really the main reason I had gone there,” Paustian said. “I knew that was my time to find a different home. That was tough. It's hard to go from feeling super secure in your position to feeling lost.”

Any concern, though, faded Sept. 12 when ASU offered him a scholarship following a visit.

“It was exciting stuff. I was ready to go,” he said. “It was a hard decision. I had good options. I felt that Arizona State was the best fit for me.”

So who are the Sun Devils getting in Paustian?

“They’re getting a player that is going to do everything he can to help the people around him be the best they can be,” McKinley said. “He really is an all around teammate. Coachable. He's a kid they're going to be able to push, have high expectation of and demand a lot of and he won’t be afraid of that. He won't back down. He’ll step up. He’s excited for that challenge. He’s excited for the opportunity to get pushed.”

“He’s comfortable in the catching position. It’s a natural fit for him,” McKinley said. “I haven't ever had a kid behind the plate that has that kind of presence. You could put anybody on the mound and they’ll be a better pitcher.”

Paustian missed nearly the entirely of the 2019 season as he recovered from the injury, but had a major impact on both the 2017 and 2018 squads that reached back-to-back state title games, with the 2017 team winning it all. As a sophomore he hit .353, but had a .521 on base percentage with a home run, 28 RBIs, six doubles and four triples while switch hitting.

“I’ve always been pretty consistent at the plate right-handed,” he said. “Left-handed was a process, and we decided after the injury it wasn't something worth risking. Going to focus on the right-handed bat.”

Paustian will be going from one winning program to another. The Sun Devils are 20-time conference champions, have reached the College World Series 21 times and have won five national championships.

“The coaches were amazing, the coaching staff loved me, (and) I loved them. I felt a connection with them, was able to communicate with them really well,” he said. “I’m a kid that’s always working out, I’m always hitting, always doing stuff, being able to do that outdoors with the top coaches in the country was pretty special to me. And they win. We’re going to win a national championship. It’s going to be fun.”

Welcome to Sun Devil Nation!!!! Long ago my family met yours when your brother was getting his transplant at UCLA. Look forward to watching you in the coming years.