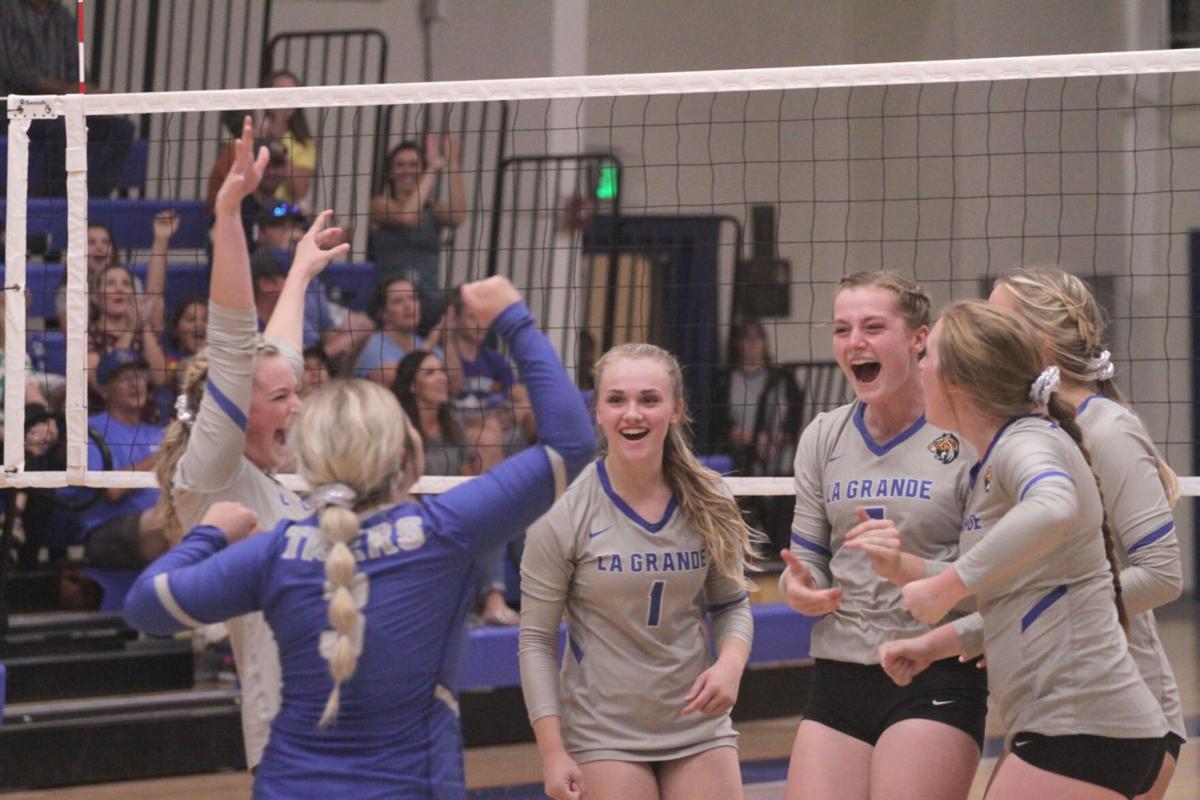 The La Grande volleyball team celebrates a point during a match against Pendleton in 2019. Volleyball, cross-country and soccer have had their start dates moved back to Sept. 23 by OSAA, a move made in hopes of giving it time and flexibility to determine if there ultimately will be high school sports this fall. 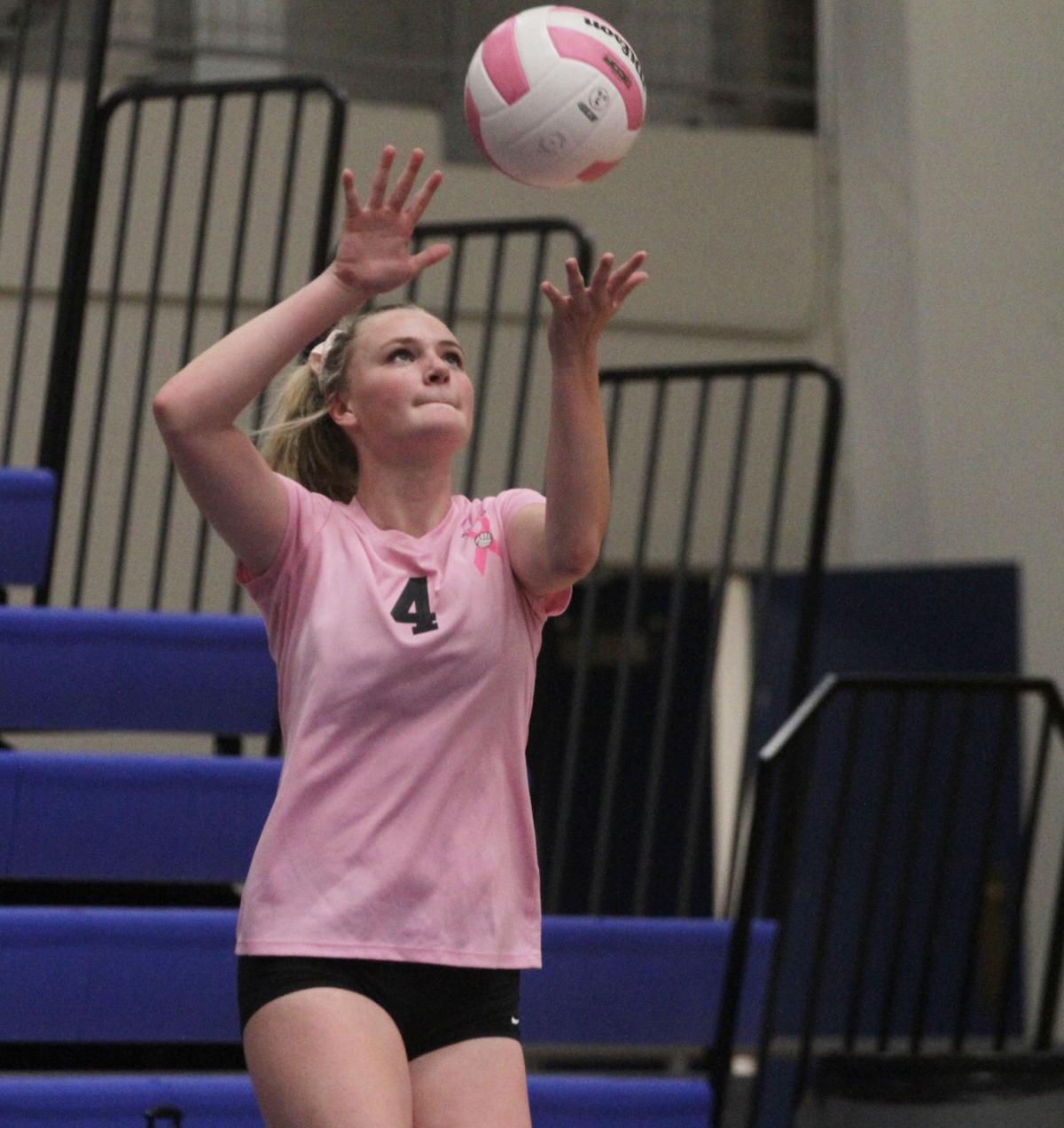 La Grande’s Presley Justice serves during a volleyball match in 2019. Volleyball, cross-country and soccer have had their start dates moved back to Sept. 23 by OSAA, a move made in hopes of giving it time and flexibility to determine if there ultimately will be high school sports this fall.

The La Grande volleyball team celebrates a point during a match against Pendleton in 2019. Volleyball, cross-country and soccer have had their start dates moved back to Sept. 23 by OSAA, a move made in hopes of giving it time and flexibility to determine if there ultimately will be high school sports this fall.

La Grande’s Presley Justice serves during a volleyball match in 2019. Volleyball, cross-country and soccer have had their start dates moved back to Sept. 23 by OSAA, a move made in hopes of giving it time and flexibility to determine if there ultimately will be high school sports this fall.

LA GRANDE — The Oregon School Activities Association’s decision Wednesday to delay the start of the 2020 fall sports season grants the state’s high school athletics body flexibility as it tries to prepare for the fall and waits on vital information from the state, according to Executive Director Peter Weber.

The executive board wrapped up three days of closed-door sessions with a call to move the start of the fall season to Sept. 23 for volleyball, cross-country and soccer, while football is still an unknown due to it being a contact support. State health authorities have deemed contact sports — football and basketball are placed in that camp by health officials — off limits for the time being.

The move allows the board more time to gain guidance from the state, which it hopes to have in time for another round of meetings set to take place the first week of August.

Weber pointed not only to the state’s guidance, but also to decisions being made by other states and what schools in Oregon plan to do for the fall as factors.

“A lot of these decisions that are being made, we’re not making,” he said. “They’re within the state level.”

California already moved its fall schedule to the beginning of 2021, and Washington has moved a portion of its schedule — including football — to the spring.

Weber said he has been on constant conference calls with other directors across the west to get a taste for how other states are handling the pandemic as it relates to high school sports.

The board also has taken input from contingencies of athletic directors and coaches from the across the state, and everyone has the same goal in mind:

“Anything to have the kids get involved and have that contact (on the field), that is what we keep hearing from them,” Weber said.

Having a full season for the fall now is off the table with the late start, but a shortened season with a postseason is still in play.

Elgin athletic director Jeff Rysdam is among those onboard with any option that gets athletes playing — even if it came down to, at the worst, having teams play just local teams without a postseason.

It’s a model he knows, as Elgin for about five years played an independent schedule for football with a full regular season schedule but no postseason option.

“I’d like to see them do something where each league decides how the seasons go,” he said. “(Even) if it means giving up a postseason and playing an independent schedule — as long as the kids are playing.”

One of the concerns for Rysdam, who also is the EHS football coach, is what would happen if a delay or move of the fall to winter or spring leads to a major overlap in sports.

“I don’t see how it could work in a small school like Elgin, Imbler or (North) Powder,” he said. “Our football team is usually on the basketball team, basketball team is on the track team. Are kids going to have to pick and choose? Unless they’ve got something up their sleeve how (could) they overlap it and maintain it?”

A decision of that level, though, is still a ways down the road, and for the time being, a start date for the other fall sports does bring some normalness and hope.

“I am glad there can be a sense of normalcy. Talking to one of our senior cross-country runners and she was worried about her season,” he said. “Now she has something to look forward to.”

La Grande athletic director Darren Goodman also is of the mindset of doing whatever is necessary to get a season for athletes, but also understands the need for a cautious approach.

“I think you can’t fault anybody for erring on the side of safety these days,” he said. “Kids’ health, kids’ safety has always been the No. 1 priority. You don’t want to be in that chair making that decision, but you respect the people who are.”

Goodman, like Rysdam, is hoping the season can be set up in a way that doesn’t result in athletes having to pick between sports as La Grande also has a plethora of multi-sport athletes.

“I honestly would like to see us start later and shorten seasons, but get all three seasons in,” he said. “I think we legitimately could start winter sports on time by then, then fit spring and fall in there.

“A school like La Grande where we depend on kids to play two or three sports, you can’t expect a kid to play football and baseball at the same time.”

Weber said ideally, if OSAA has its input from the state by its August meetings with regard to schools and other policies, the board could make a decision that week on what the season looks like.

OSAA also hasn’t named a “drop-dead” date on when it has to make a decision on whether to play the season or not, Weber said. And while the delay granted the entity additional time, that deadline is approaching.

“We’ve been hesitant to say we are going to decide by this point,” Weber said. “We know that day is coming upon us soon.”