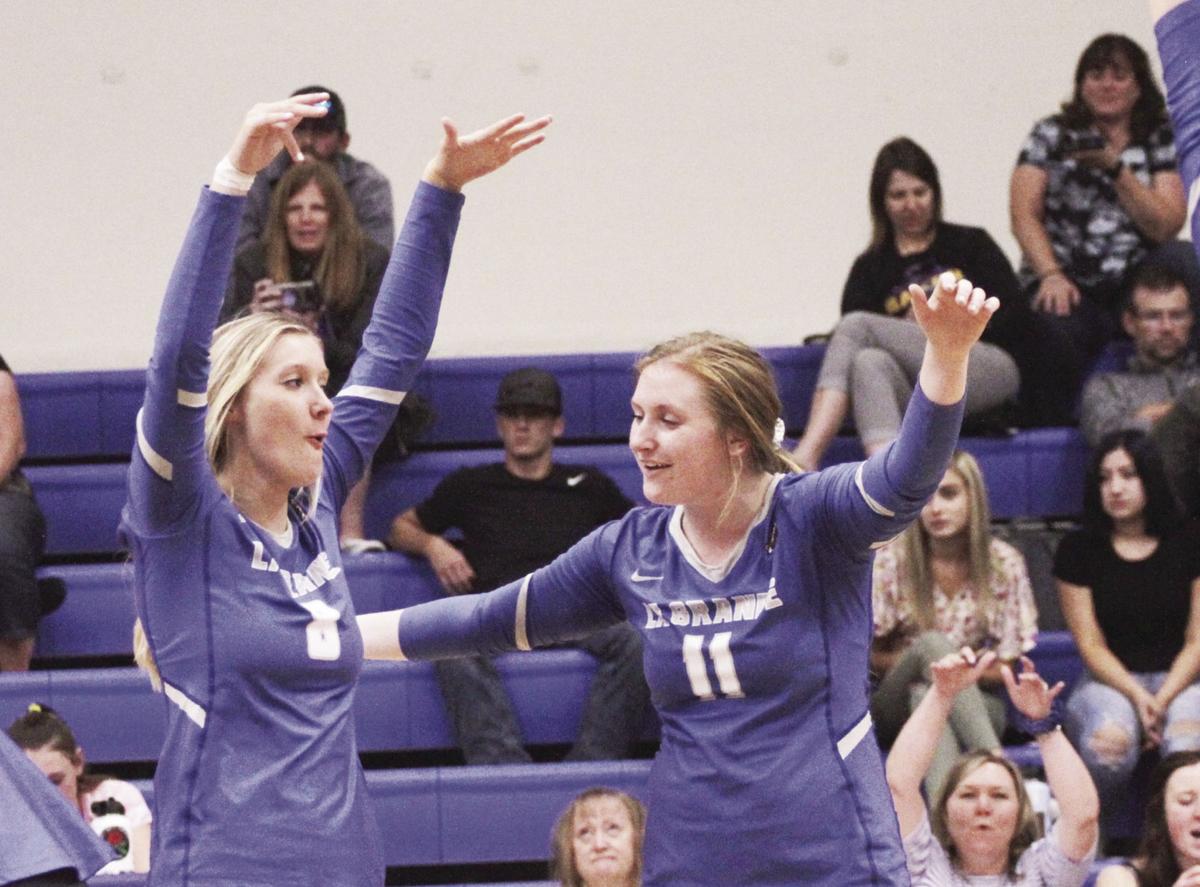 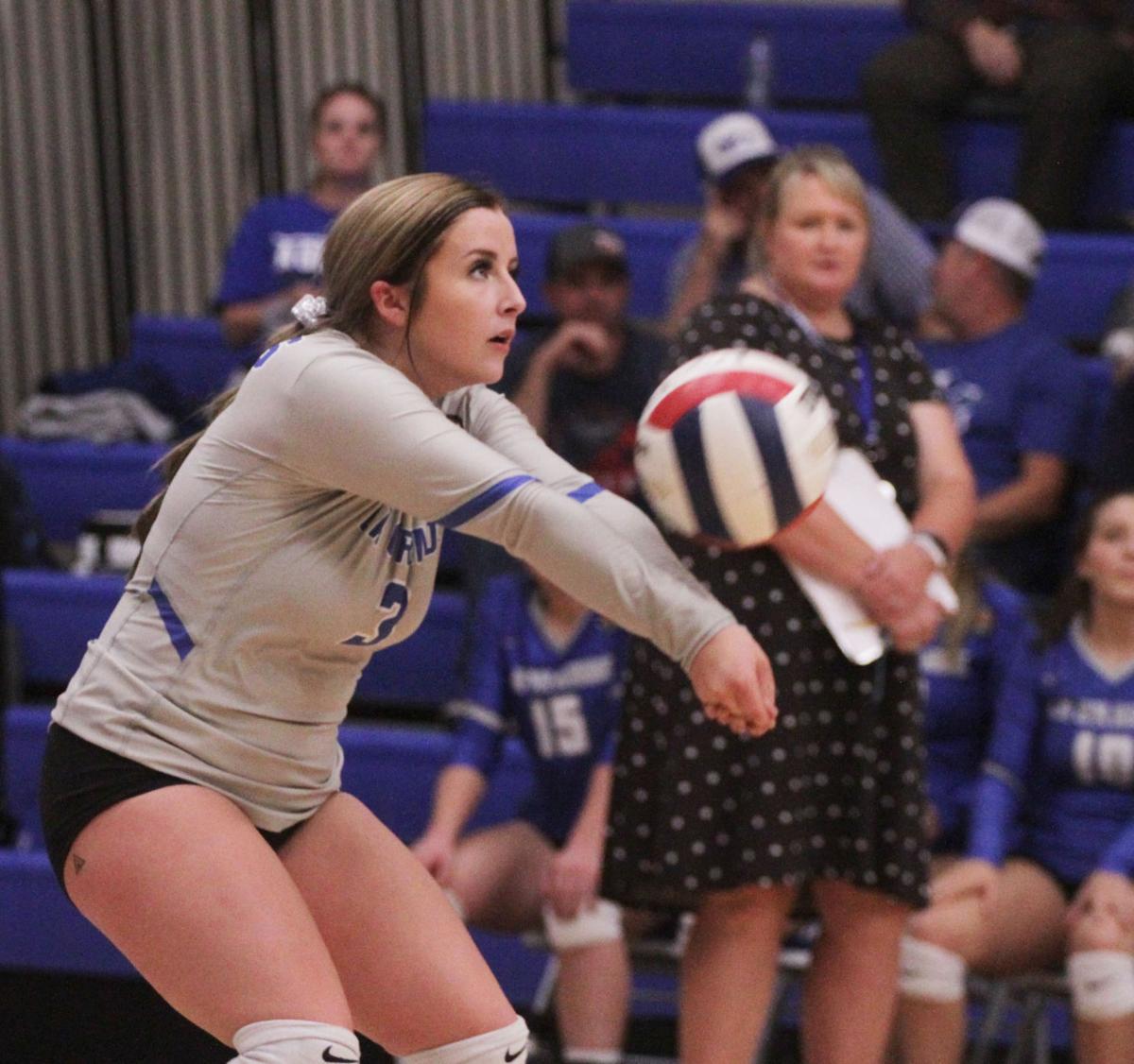 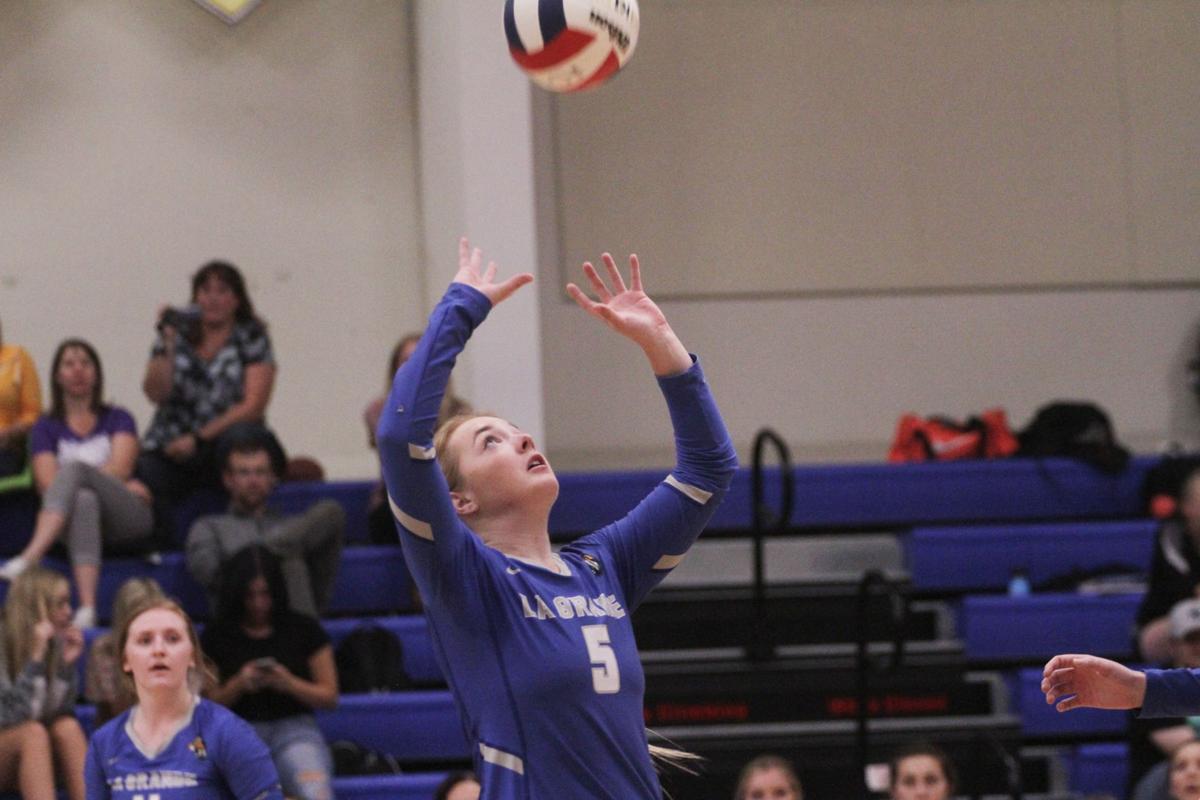 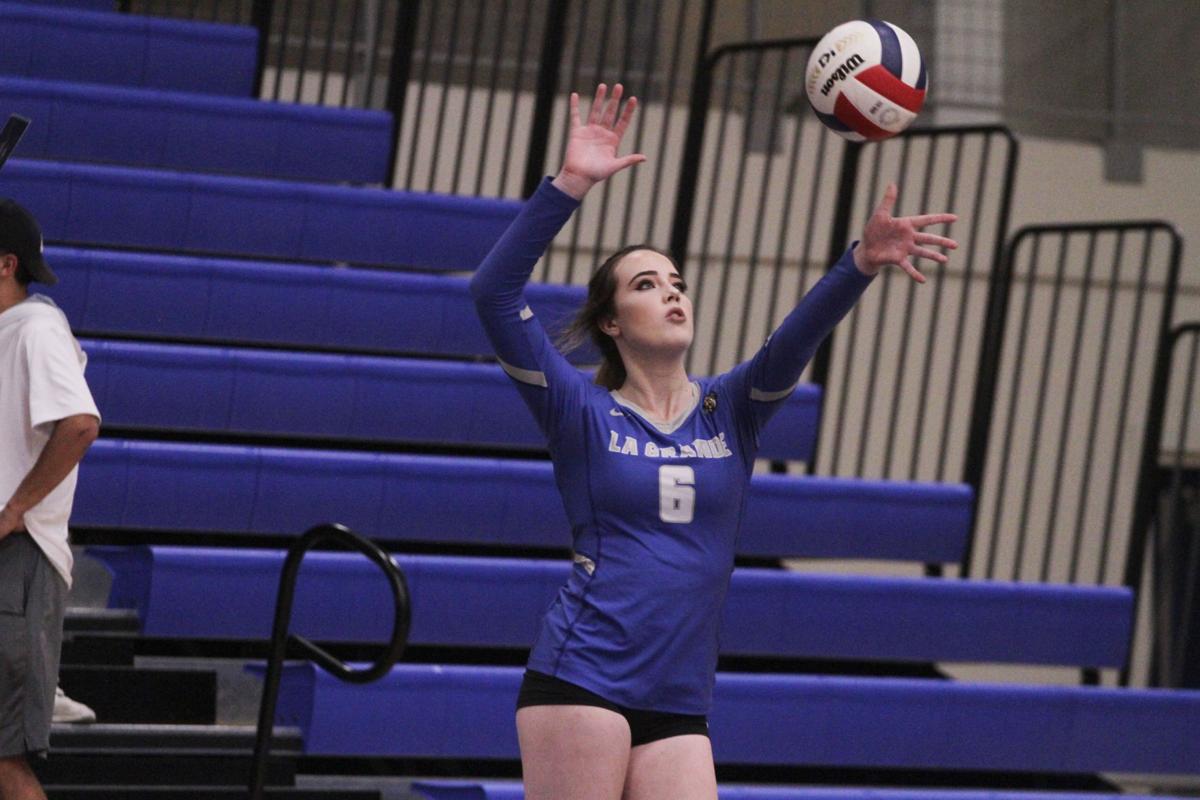 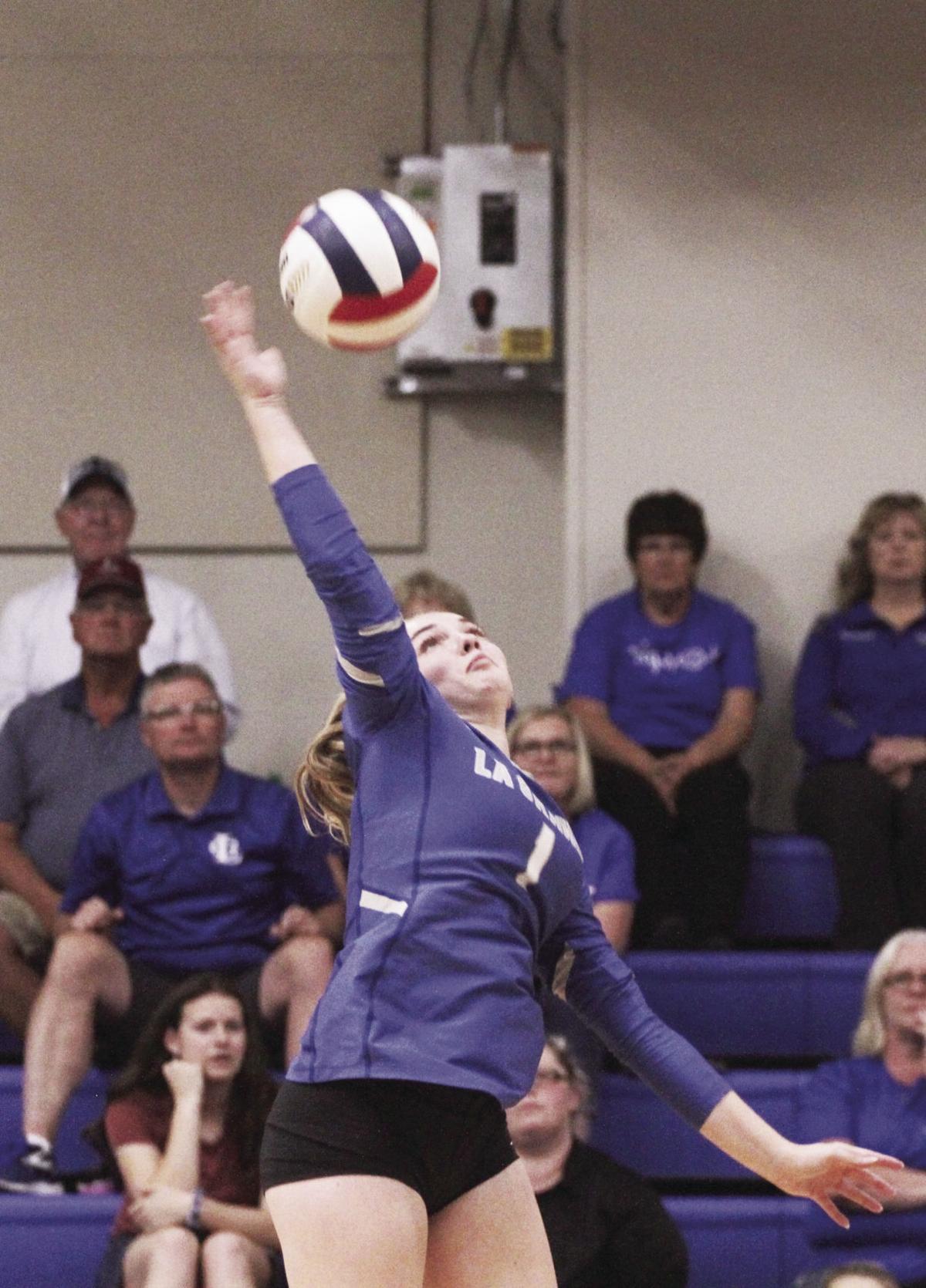 Tuesday’s Baker-La Grande volleyball match didn’t have the typical feel of a contest between the Greater Oregon League rivals. Whether it was because the teams had just played one another Saturday in the Sisters Tournament or because of illness among the Tigers, energy was lacking at La Grande High School.

“We came out pretty flat. We knew Baker was going to give us a good game tonight,” La Grande head coach Melinda Becker-Bisenius said. “They gave us a game (last) weekend (in Sisters). You don’t want to make excuses. We gotta come out stronger in the first game regardless of anything.”

“It was really flat, but after that first set we got in the huddle and decided we needed to play strong. Even though we were all sick, we couldn’t let that get to us,” La Grande senior Kenzie Williams said. “(We needed to) bounce back and play our game and not let little mistakes get to us.”

What energy was in the building in the first set came from Baker, as the Bulldogs’ offense peppered La Grande early and often to take the lead. Lacy Churchfield, who led Baker with 12 kills, had six in the opening set, but it was the combination of Averi Elms and Hailey Zikmund that were strong late in the set for Baker. Zikmund had a kill and teamed with Elms on a block, and Elms added a solo block and a kill during a set-ending 9-2 run for the early lead.

That early burst, though, didn’t carry over, continuing a theme Baker head coach Chelsea Hurliman said has plagued the Bulldogs this fall.

“That’s the hardest thing we struggle with as a team,” Hurliman said. “We come out really strong and excited and ready to go, and we make a few errors and we just can’t seem to get our feet back under us again.”

The coach also said Baker struggled offensively when the Tigers prevented Churchfield from being as big a piece of the offense later in the match.

“That tends to be what happens,” Hurliman said. “She’s very strong in one area, and as soon as (the other team) figures out how to stop that, or double block it or triple block it, they shut it down and then we gotta go to Plan B.”

The Tigers started to find some energy in the second set and received a major lift from Josie Reagan. She had four kills during the set, two during what proved to be an important 5-0 run to give La Grande the lead for good at 14-9. Jayce Seavert added a late block and Reagan had another kill late to help stop a Baker rally.

Williams agreed that Reagan’s effort was important for the Tigers.

“Josie had some really good kills that got us going, got us excited and brought up our energy,” she said.

A 10-3 run in the third set put La Grande in the driver’s seat as it gathered momentum. Seavert, who led La Grande with 11 kills, had five in the set, including three down the stretch to help give the Tigers a 2-1 lead.

Another 10-3 run by La Grande, which started after an ace by Elms, put the match away. Presley Justice had a kill and an ace to start it, and Reagan and Anna Green teamed on a block later to push the Tigers’ margin to 20-13. Justice added two more kills to help finish the match.

“They just decided they were going to do it. We obviously didn’t want to lose tonight, and we at times had good runs,” Becker-Bisenius said.

Reagan finished with six kills. Williams had 21 assists, and Jacie Howton added 13 assists and three aces. Felicity Houston had 23 digs in the back line. Seavert had 14 digs, and Justice had 13.

Lauren Benson contributed seven kills for Baker and, along with Anna Carter, had a team-best 19 digs. Kaylee Dalke added 15, and Elms had a strong all-around match with 21 assists, 13 digs, five kills and four aces.