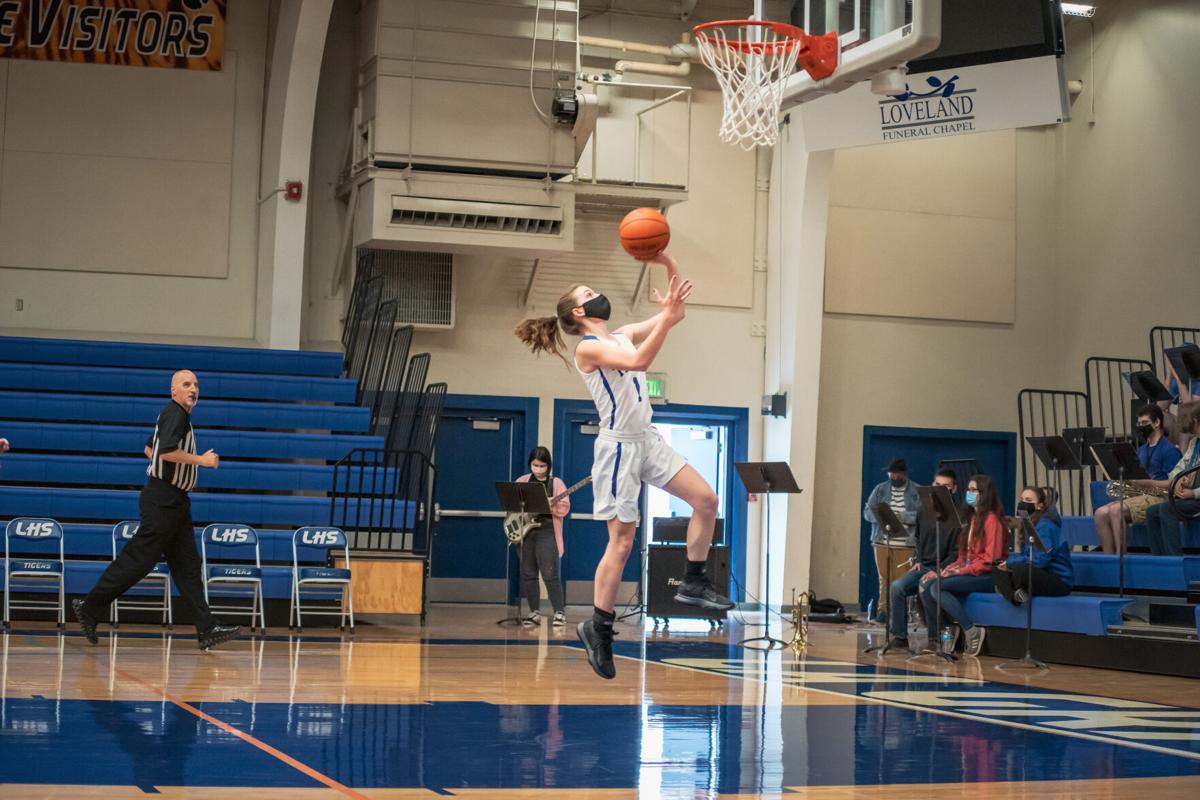 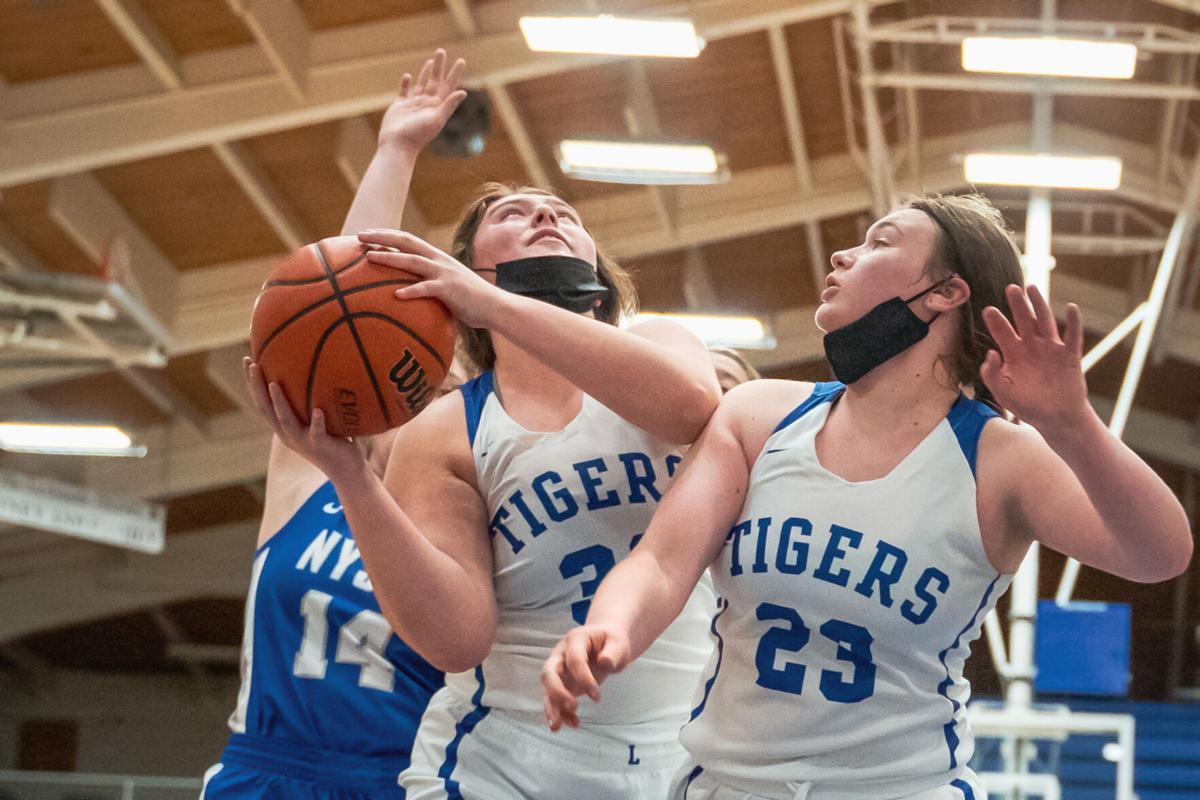 La Grande’s Ella Dunlap and Maddie Larman fight for position in the post Thursday, May 20, 2021, against Nyssa. 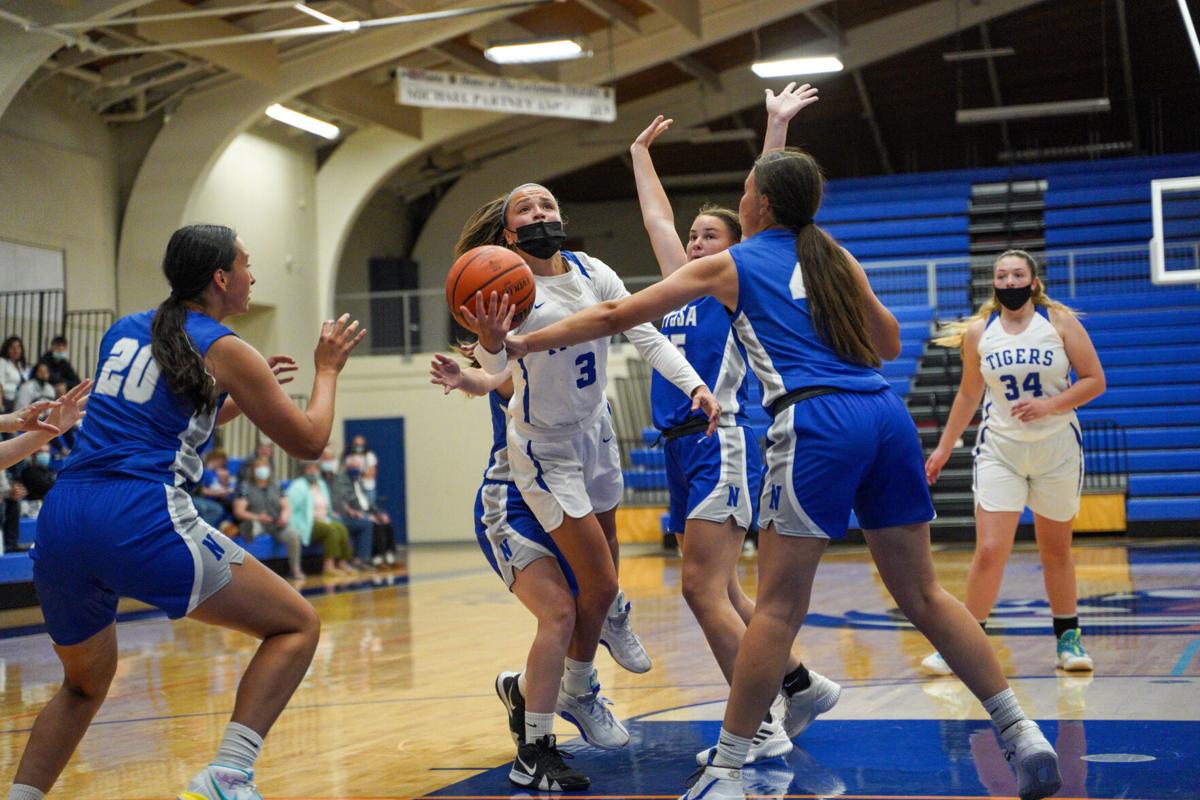 La Grande's Camryn Collman drives into the lane against a pack of Nyssa Bulldogs on defense during the season opener Thursday, May 20, 2021. OSAA recently announced that fully vaccinated players can choose to not wear masks on the court.

La Grande’s Ella Dunlap and Maddie Larman fight for position in the post Thursday, May 20, 2021, against Nyssa.

La Grande's Camryn Collman drives into the lane against a pack of Nyssa Bulldogs on defense during the season opener Thursday, May 20, 2021. OSAA recently announced that fully vaccinated players can choose to not wear masks on the court.

LA GRANDE — After a long pause, basketball season is back at La Grande High School.

The Tigers girls basketball team took on the Bulldogs of Nyssa and came away with a 63-25 victory during their season opener Thursday, May 20.

“It feels strange to be playing basketball this time of the year,” said head coach Brian Wright.

The last time the Tigers took the court was in the playoffs last season. La Grande had qualified for state competition but the season was cut short due to COVID-19. Now playing in the spring, Wright’s team looks poised to start the season on a high note.

The Tigers came out strong, opening the game on a 14-0 run. Camryn Collman scored five of the team’s first seven points, while controlling the tempo on fast breaks and rebounding effectively.

“We’ve been trying to work on being able to push the ball and get easier opportunities in transition,” Wright said. “I thought the kids did a really good job of that early on.”

Collman finished with 10 points and was all over the court on offense and defense for La Grande.

The Tigers held a commanding 20-2 lead at the end of the first quarter and never looked back. Makenna Shorts added eight points in the second quarter to extend La Grande’s lead to 38-9 at the half.

In the paint, Ella Dunlap and Maddie Larman dominated the boards and scored efficiently up close to the basket.

“It’s our game plan. We run a lot of triangle and we look at the low block,” Wright said. “We try to get the easiest opportunities we can get, or putbacks.”

La Grande cruised through the second half, finishing with a 63-25 scoreline on their home court. The Tigers held the Bulldogs to less than 10 points in each quarter, despite a late push from Nyssa.

Up next, La Grande will host Baker on May 27. The season is a bit unconventional, but the Tigers are glad to be back.

“For some of these kids it’s unfinished business,” Wright said. “They want a chance to get back on the court and it’s good for them.”

La Grande started off its season 1-0, despite several players yet to hit the court because they still are competing for the softball team. With a full roster, Wright and the Tigers are looking to make a run this season.