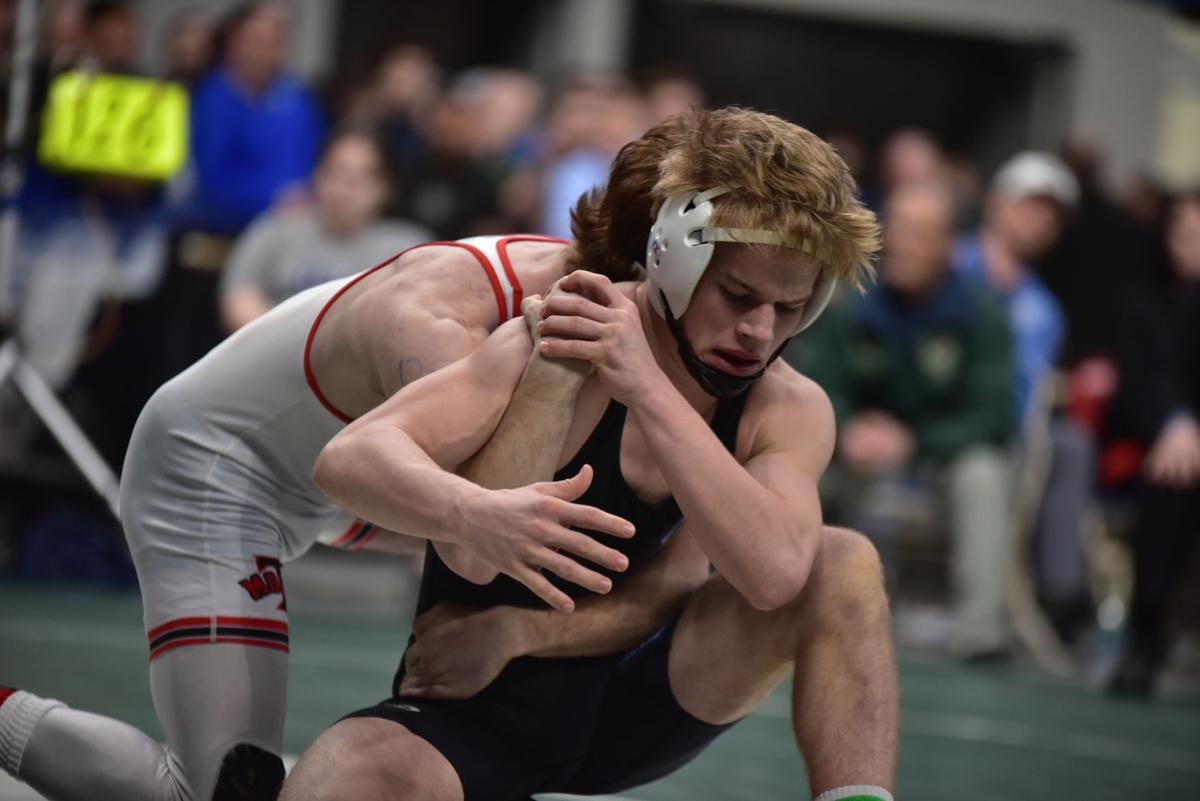 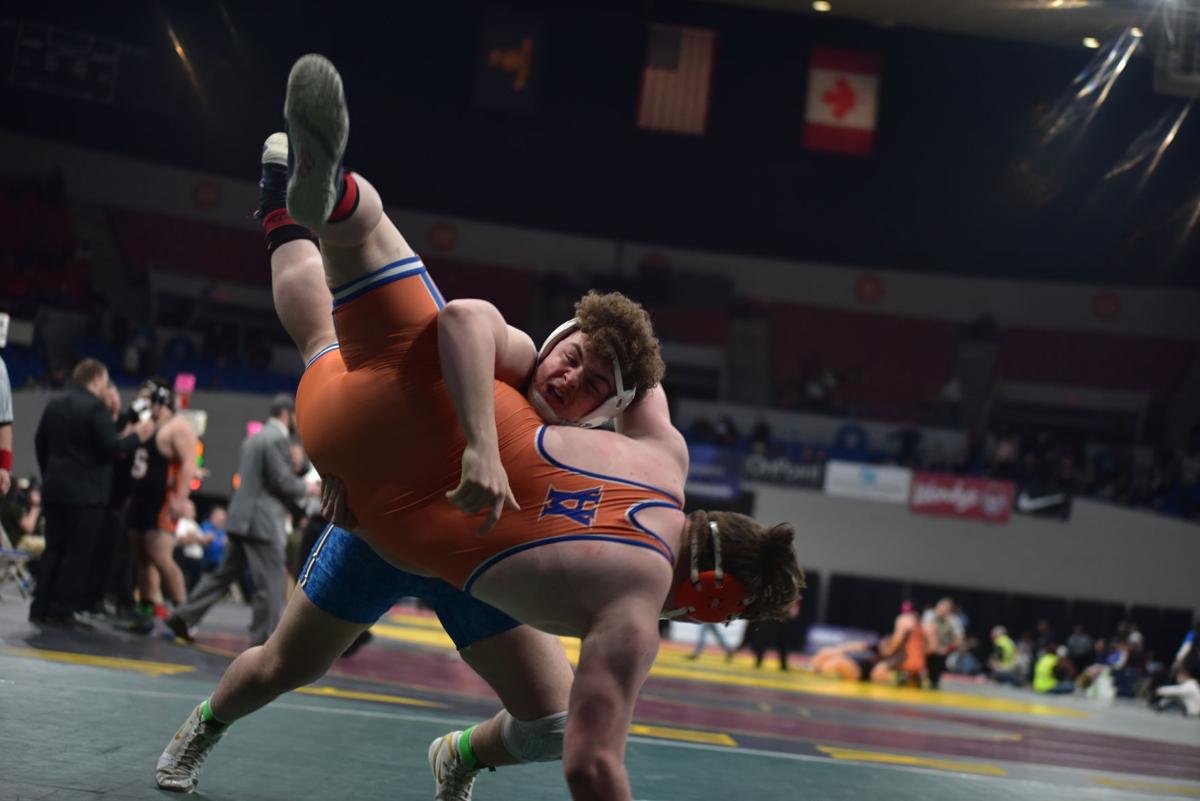 La Grande’s Gabe Shukle slams Hidden Valley’s Christopher Woods Saturday to set up a pin in the final of the 285-pound division at the 4A state tournament in Portland. 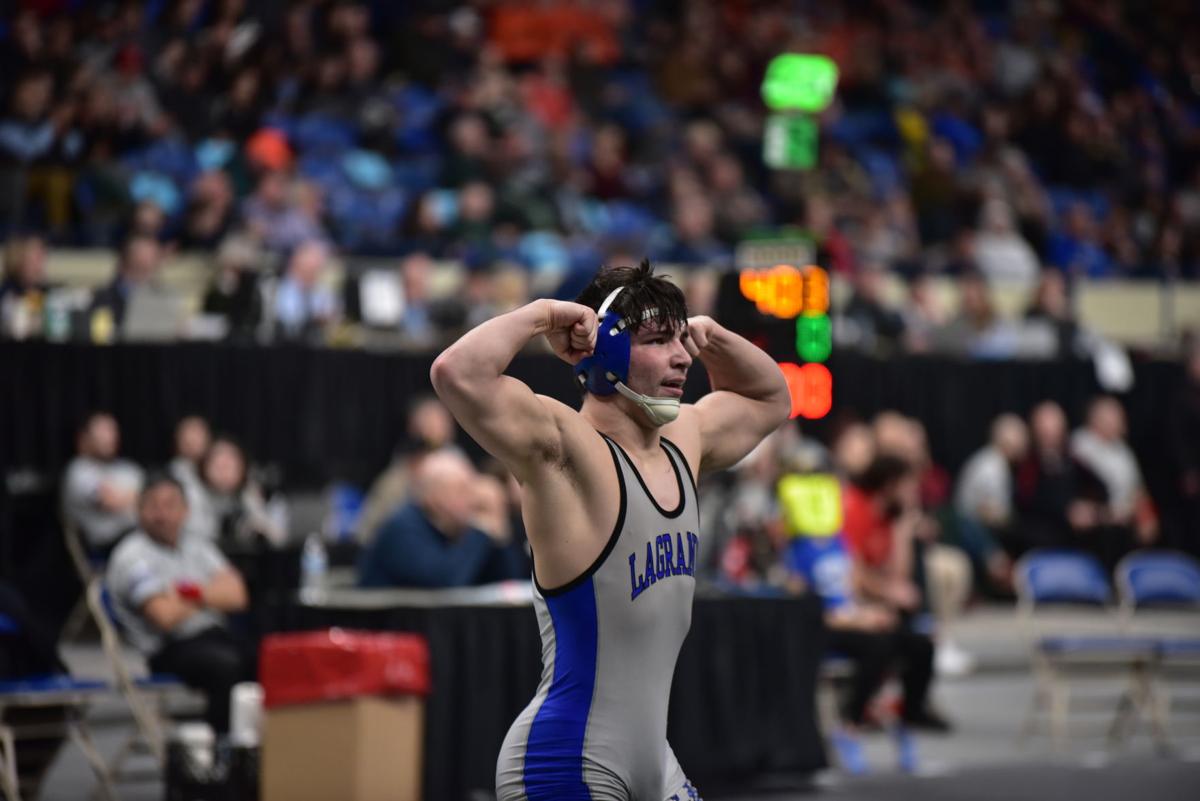 La Grande’s Parker Robinson flexes after winning the 170-pound title Saturday in the 4A state tournament in Portland 5-3 for his second wrestling title. 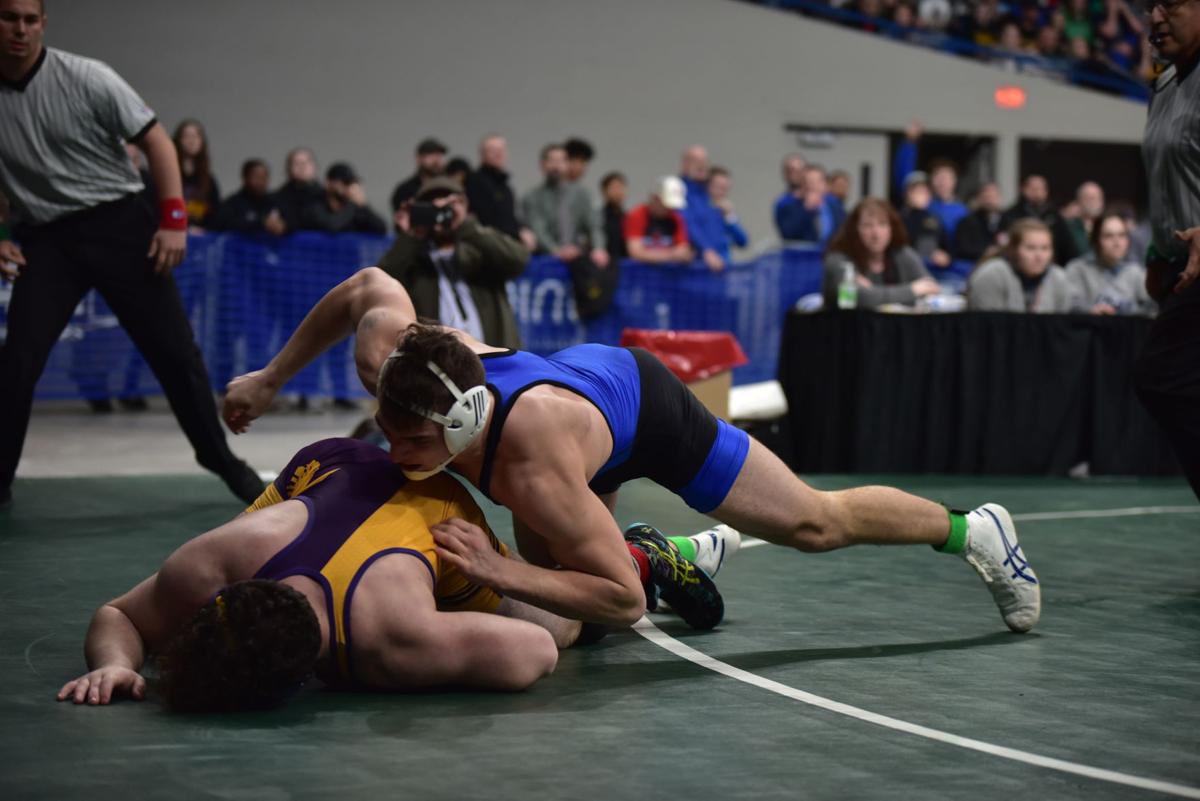 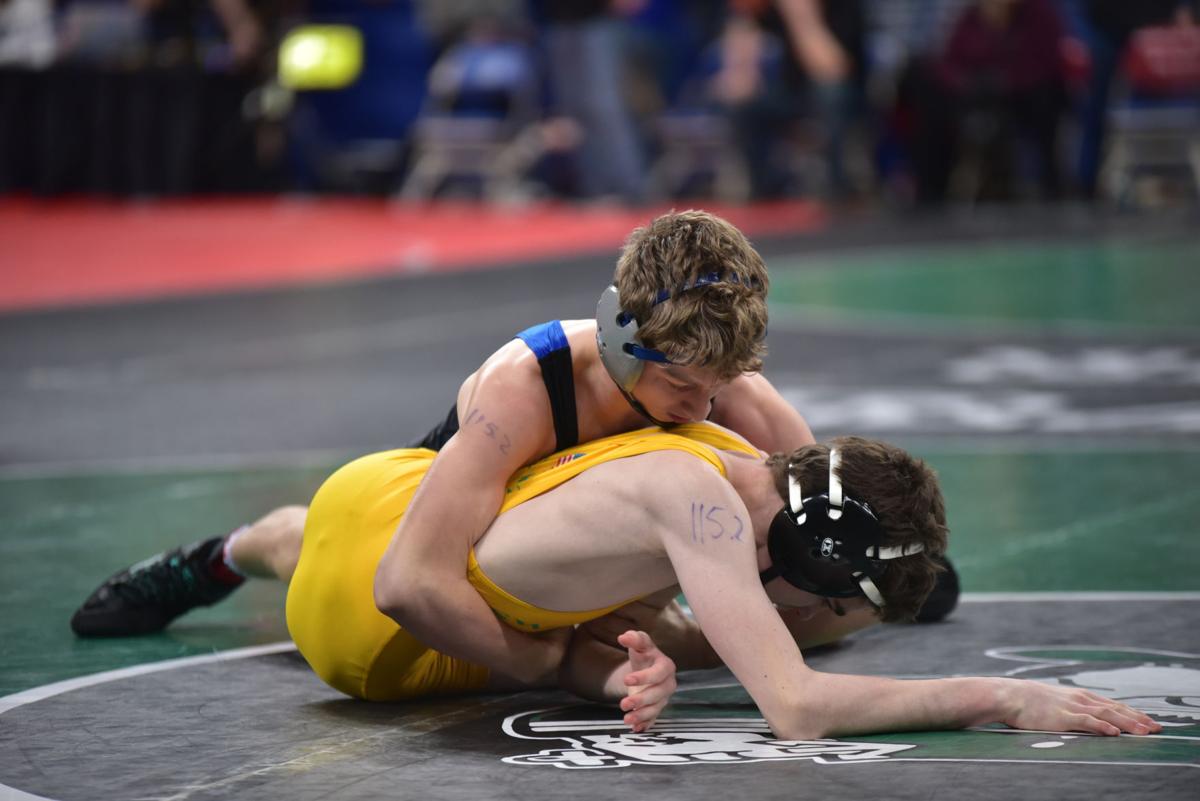 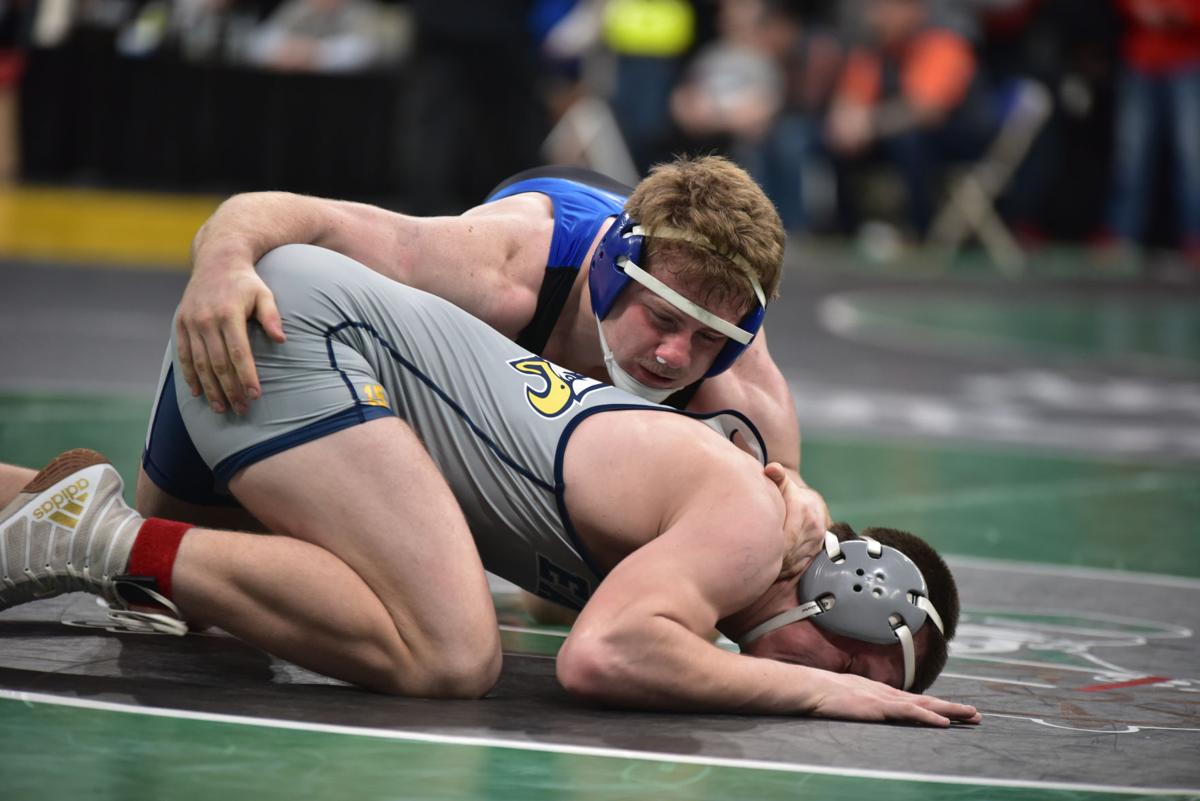 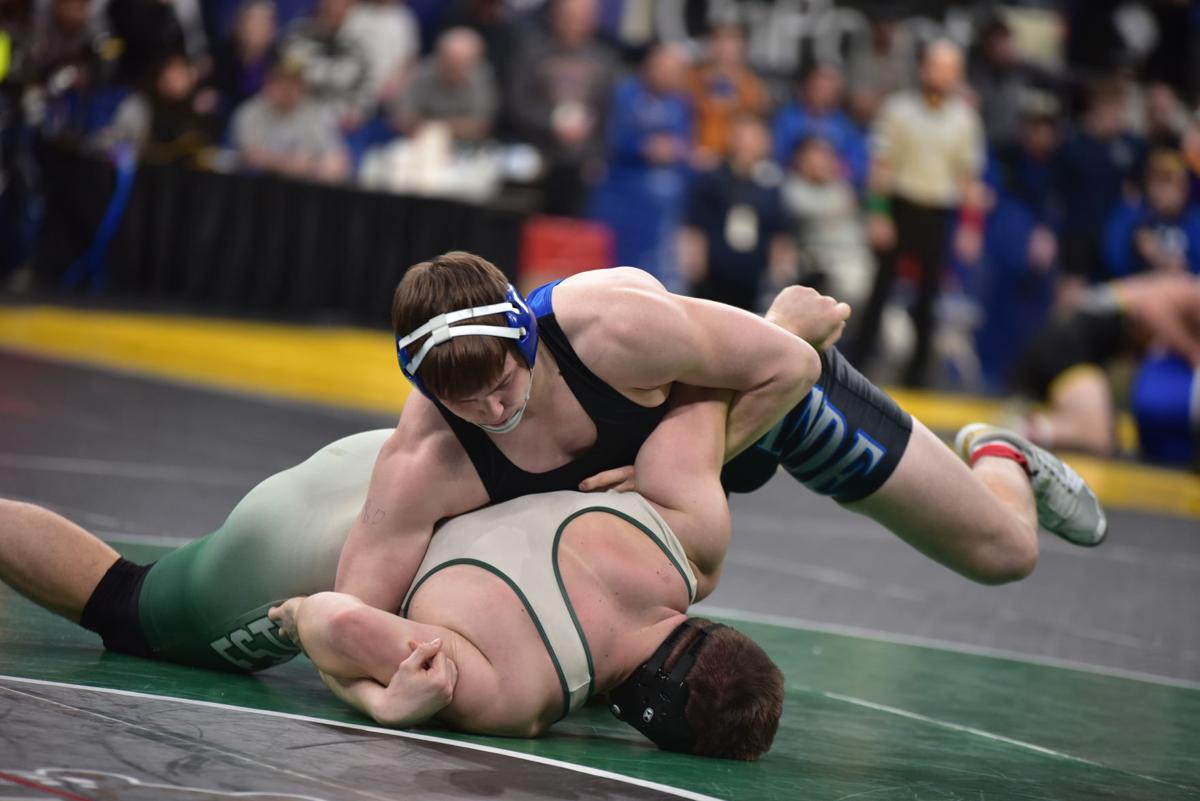 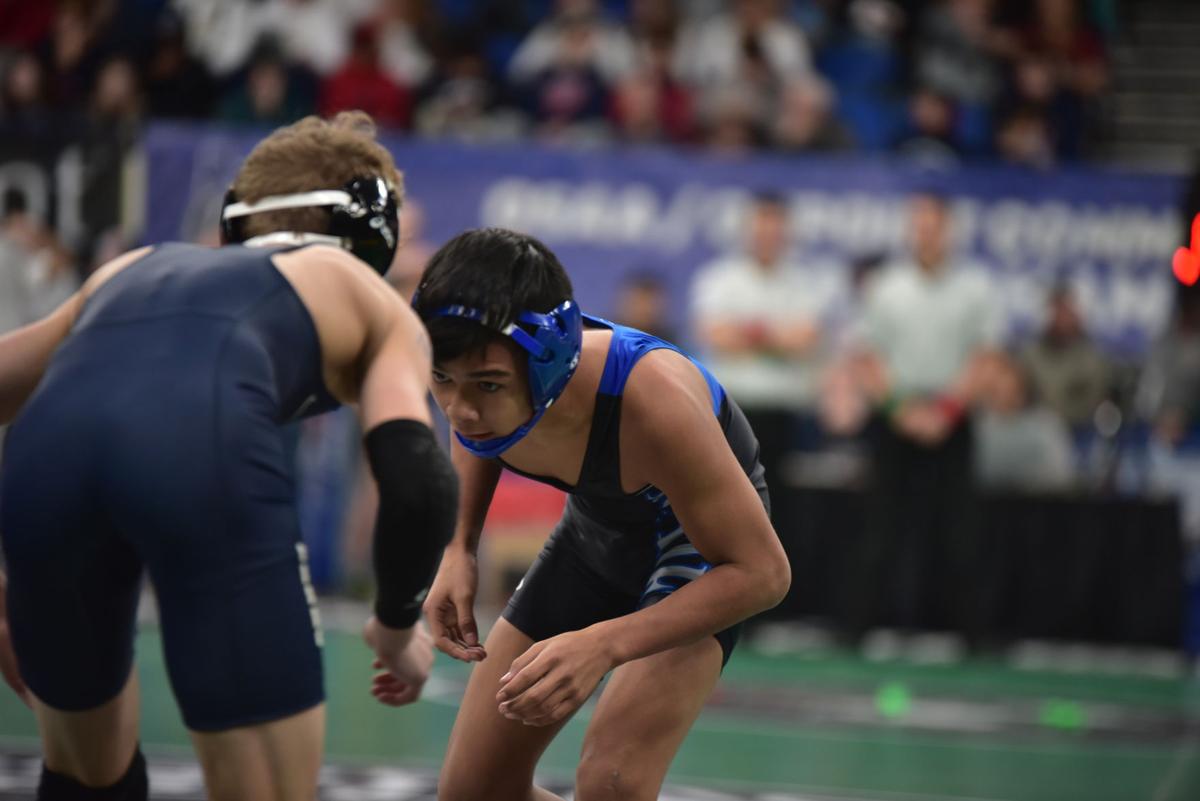 La Grande’s Gabe Shukle slams Hidden Valley’s Christopher Woods Saturday to set up a pin in the final of the 285-pound division at the 4A state tournament in Portland.

La Grande’s Parker Robinson flexes after winning the 170-pound title Saturday in the 4A state tournament in Portland 5-3 for his second wrestling title.

Saturday, the Tigers ended a stretch of 24 years between titles in wrestling.

Boosted by four individual championships, three second-place performances and several important wins throughout the lineup, the Tigers won their first state wrestling crown since 1996, edging runner-up Sweet Home by just 6.5 points — 261 to 254.5 — for the 4A title.

“It’s a great accomplishment,” said sophomore Braden Carson, one of the four Tigers who claimed an individual championship. “I don’t think we could have done much better. We wrestled our hearts out.”

Parker Robinson and Christopher Woodworth both repeated as state champions Saturday, with Woodworth’s 4-3 victory over Elmira/Crow’s Nat Brown at 195 pounds giving La Grande the needed boost in points to finally pull ahead of Sweet Home for good. Braden Carson and Gabe Shukle also won state championships, as the sophomore and senior each brought home their first individual titles.

The Tigers entered the championship round actually trailing the Huskies on the team scoreboard by a mere point and a half. It wasn’t the first time they had been looking up at Sweet Home on the leaderboard, either. Sweet Home held a lead of more than 30 points after the first day of action and at one juncture during the semifinal round was up on La Grande by more than 40 points.

“It was definitely kind of nerve-racking to see Sweet Home go up 30-40 points on us, and then we would catch up close, and then it would kind of go back and forth,” Woodworth said. “I think that was an expectation of ours, just definitely a more nerve-racking state tournament.”

La Grande chipped away to close the gap and entered the finals with a major advantage over the Huskies in that it had seven wrestlers in the finals, while Sweet Home had just two.

Carson, who had lost in the title match a year ago, defeated Quintin Metcalfe of Tillamook by an 8-4 decision in the 126 final. The sophomore used a first-round takedown and a second-round escape to earn a 4-2 lead entering the final round. Metcalfe closed the margin with an escape in the final round, but Carson notched a key takedown with about 55 seconds to go to secure the crown.

“I basically hung that picture on my wall every day (and) I looked at it every day — the picture of me standing on second — and it just drove me to get first,” he said. “That second place didn’t feel good at all. It drove me every day I was going to practice.”

Robinson wrapped up a dominant senior campaign and stellar wrestling career with a hard-fought 5-3 decision over Tillamook’s Miquel Niemi in the 170 final — one in which he had to overcome an asthma flare-up.

“A lot of people don’t know that (Robinson has asthma). Wrestling with asthma is a tough thing,” Klel Carson said of Robinson. “He battled through that his whole career.”

The senior scored an early takedown and led 3-1 before needing to use an inhaler midway through the match. His lead was cut to 3-2 during the final round, but he managed a takedown late to ensure his second title.

“Winning it individually was cool, but this one wasn’t really for me, this was for my teammates, because in order for us to win as a team we had to have three winners,” he said.

Robinson said his focus with the win — and what gave him the drive to endure despite the asthma flare-up — was on getting points to help lock up the championship.

“I was just thinking about what I needed to do as a teammate in order for our team to be successful. Being able to fight for my team is why I was able to push through,” he said.

Woodworth got the needed points with his repeat performance two matches later, winning his own thrilling match. Woodworth and Brown were knotted at 2-2 late in the third after Brown scored a point on an escape. In the closing seconds, Woodworth got the upper hand in a scramble and scored a takedown — with his toes barely inbounds — with just four seconds remaining for the win.

Shukle provided an exclamation point with his pin of Christopher Woods of Hidden Valley in the 285 final. Shukle controlled the match, getting an early takedown before body-slamming Woods to the mat to set up the pin in the final seconds of the first round.

“It was a great feeling to put the icing on the cake, cap off my wrestling career and win it individually and as a team,” he said. “All of the hard work we put into this season, it really paid off — we all worked hard together and never quit.”

Three Tigers came in second place — Joshua Collins (113), Reed and Gerst. Collins posted a valiant effort in his final against undefeated Mauro Michel of Cascade — who had three pins in a combined total of 49 seconds entering the final — before falling by an 11-4 decision.

“He wrestled so well in the finals against one of Oregon’s tougher kids. He almost caught lightning in a bottle,” Klel Carson said of Collins.

Reed met up with Baker’s Hon Rushton at 182. The rivals have gone back and forth in their careers, but this one went to Rushton, who claimed a second-round takedown to help build a 4-0 lead before claiming the title by fall midway through the third round.

Gerst dropped an 8-0 major decision to Banks’ James Ellis in the 220 final, as Ellis scored a takedown in each round on his way to the title.

Five other Tigers placed Saturday. Brysen Penaloza — who was among the 10 LHS wrestlers to reach the semifinals — claimed third at 106 pounds. Cole Isaacson also was third, winning five matches in a row at 132 after dropping his first match of the tournament.

Alex Kehr, another semifinalist, won three matches by fall on his way to fourth place at 138. Dominick Caratello placed fifth after also reaching the semifinals at 120. And Wyatt Livingston used a run of three wins in a row midway through the tournament to propel him to a sixth-place finish at 145. Braxton Bisenius (145) and Lamar Ward (182) each had wins during the tournament.

“It’s a really good win,” assistant coach Walt Anderson said. “These kids have worked really hard. When they came in in middle school and came in (later) as freshmen, we saw a lot of good things coming.”

Anderson added the team put in the work — in season and out — to elevate itself to championship level.

“Just a great group of athletes,” he said. “All the guys have done the extra stuff throughout the year. That’s what makes the difference.”