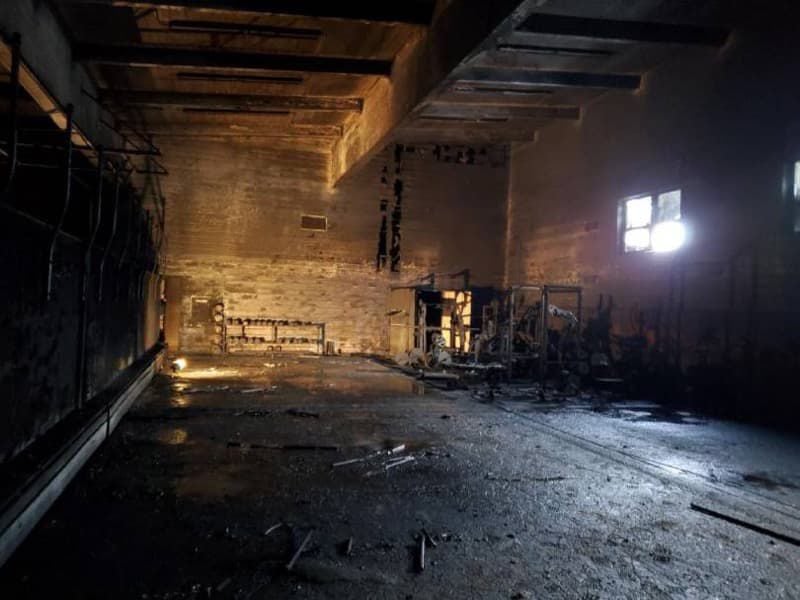 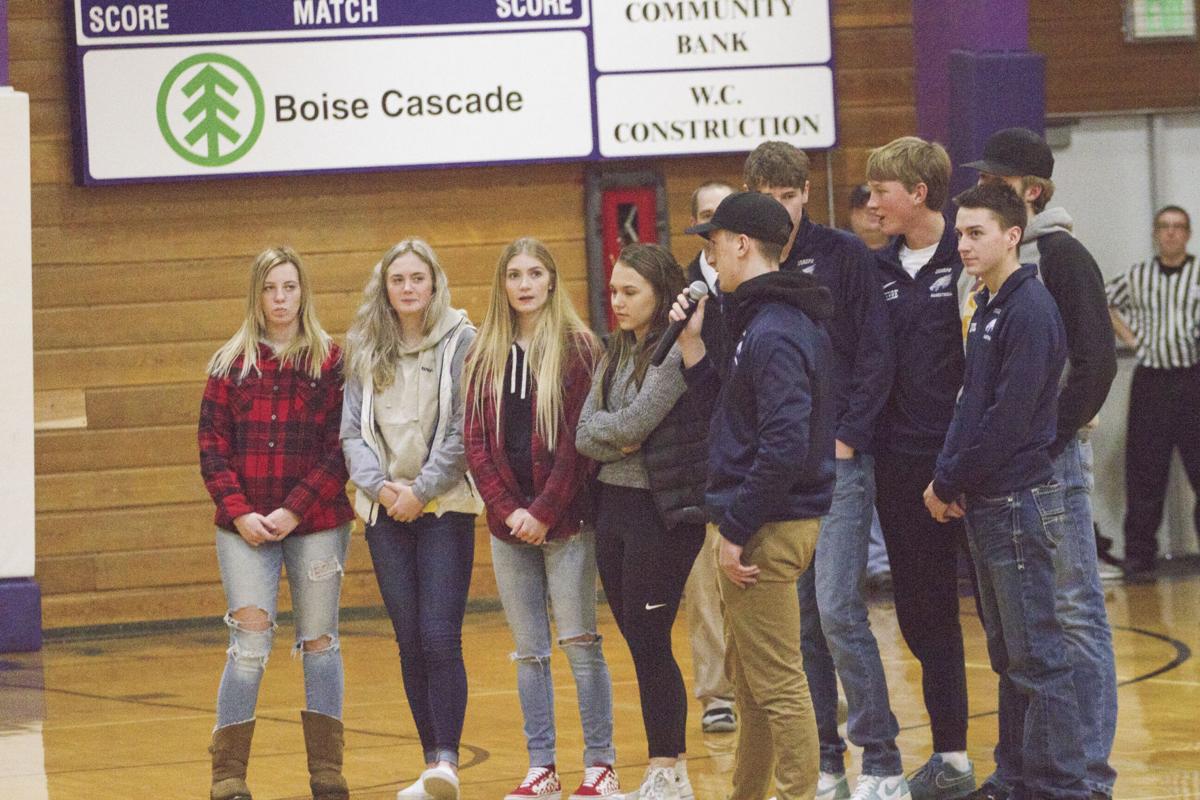 Members of the Joseph boys and girls basketball teams address fans at Saturday's basketball game in Elgin to thank them for their donations to the school in the wake of Thursday's fire that damaged Joseph's gymnasium. 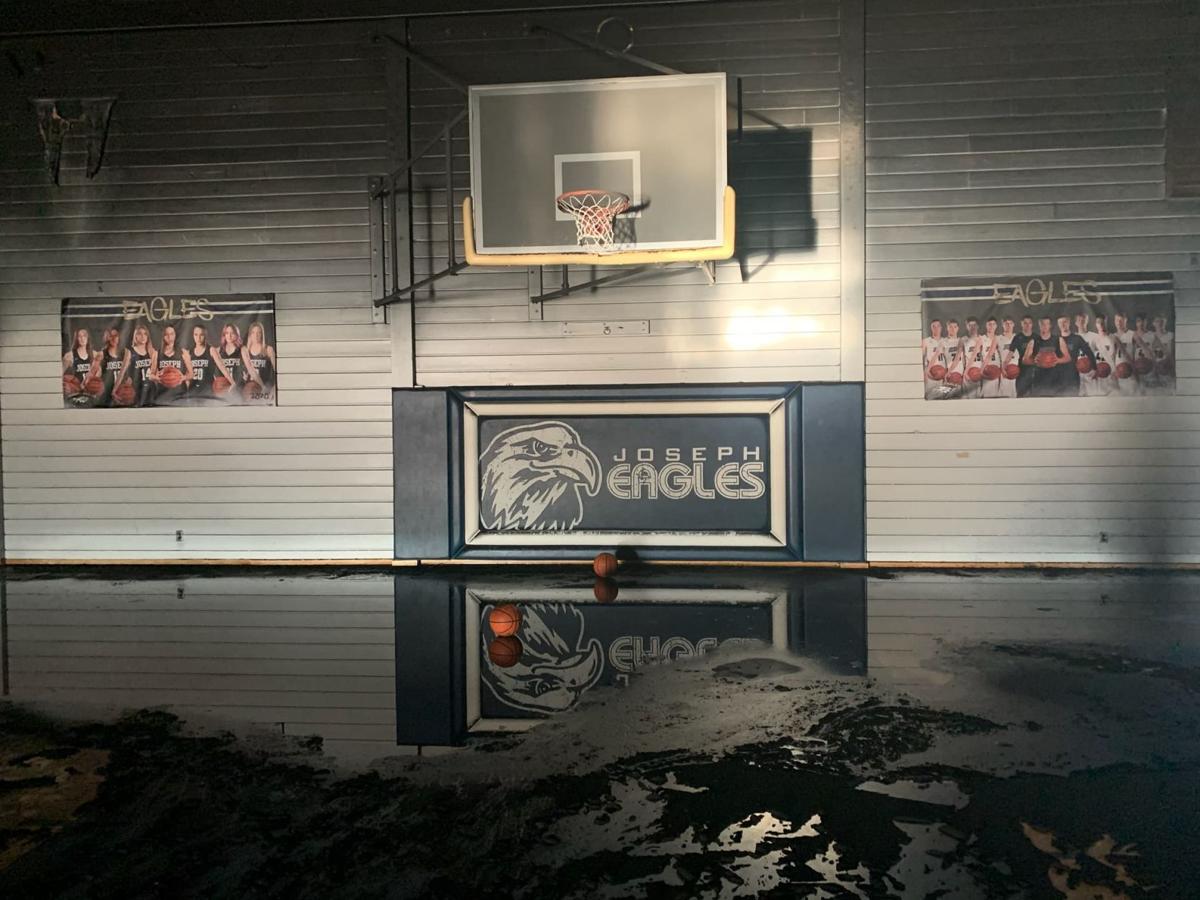 Dirty water covers the inside of the Joseph Charter School's gymnasium, which a fire scorched Thursday.

Shown is some of the damage inside Joseph Charter School's gymnasium, which was scorched Thursday by a fire.

Shown is some of the damage inside Joseph Charter School's gymnasium, which was scorched Thursday by a fire.

JOSEPH — Northeast Oregon schools are coming together to support one of their own in the wake of Thursday's fire that caused significant damage to the gymnasium at Joseph Charter School.

The blaze started during the school's lunch break Thursday, according to the Wallowa County Chieftain, and firefighters got the fire under control in about 45 minutes. The extent of the damage is unclear at this point, according to Joseph superintendent and girls basketball coach Lance Homan.

"It's black. (The fire) charred the ceiling. Some of the banners melted. It's hard to tell because there's not electricity in there right now," Homan told The Observer Friday. "There's ash everywhere. Wrestling mats melted. It got hot enough in there that some of the plastics and stuff melted in the gym. We have yet to really know what will be needed."

Joseph boys coach Olan Fulfer also had a chance to see the gym.

"The floor didn't get reached by the fire, but it's destroyed by water. The walls too," he said, adding he was able to walk on the gym floor and that it is warped. He said the walls also are warped and "they have an incredible amount of smoke damage."

What also isn't clear is the amount of damage to gym equipment. In addition to the wrestling mats, basketballs and more will need to be replaced, Homan said.

Homan said the players on the girls basketball team had their game uniforms with them. There initially was uncertainty with the boys uniforms, as Fulfer said Friday uniforms in lockers at the time of the fire have extensive smoke damage.

However, in a follow-up Saturday, Fulfer said the team's road uniforms are OK because they were not in the lockers.

The sprinklers in the gym helped firefighters extinguish the blaze. Classrooms did not get hot enough to set off the sprinklers, Homan said. Water flowed from the gym down the hall to the cafeteria and into some classrooms, but the damage seemed minor and the computers were unharmed.

"A couple of classrooms have water on the floor. However, the classrooms are exactly as they were left at 11:30 yesterday," he said Friday.

Homan said Saturday that students would be out of school for the upcoming week and he believes next week students will be able to resume classes — fifth through 12th grades at the school, and kindergarten through fourth grades at a to-be-determined location in town.

Fulfer said the boys team is planning to use the tragedy to bring it together, but also said there is a sense of hurt.

"Our seniors are definitely devastated," he said. "They lost their home gym and won't be able to play in there."

Homan said Joseph has received an outpouring of support from across the region and even the state. The school, he said Saturday, has arranged to play the remainder of its home games in Enterprise or Wallowa.

Other coaches from across the region and state, as well as by OSAA, have contacted Homan. And Fulfer listed Enterprise, Wallowa, Elgin, Imbler and Weston-McEwen among the schools whose coaches have reached out to him, offering everything from gym use, basketballs, practice jerseys and even game jerseys.

Two of those nearby neighbors are offering financial support. The Elgin School District on its Facebook page Friday said it would donate the gate of Saturday's home game against Imbler, as well as any donations contributed by attendees and funds raised from a blanket toss, to Joseph. Imbler, in addition, donated the gate from its Friday game against Griswold to Joseph, and passed a hat to collect donations from fans.

Homan almost was overcome by emotion when first learning of Elgin's donation.

Fulfer added the outpouring of support shows the point made by Greif — that community is more than just one's hometown.

"That was really, really cool to see," he said. "The kids loved it. I love it. It shows our community is not just Joseph. It's Eastern Oregon."

Homan said those who wish to reach out to help can call the Joseph school office at 541-432-7311 or visit the school's Facebook page or website: www.staff.josephcharter.org.