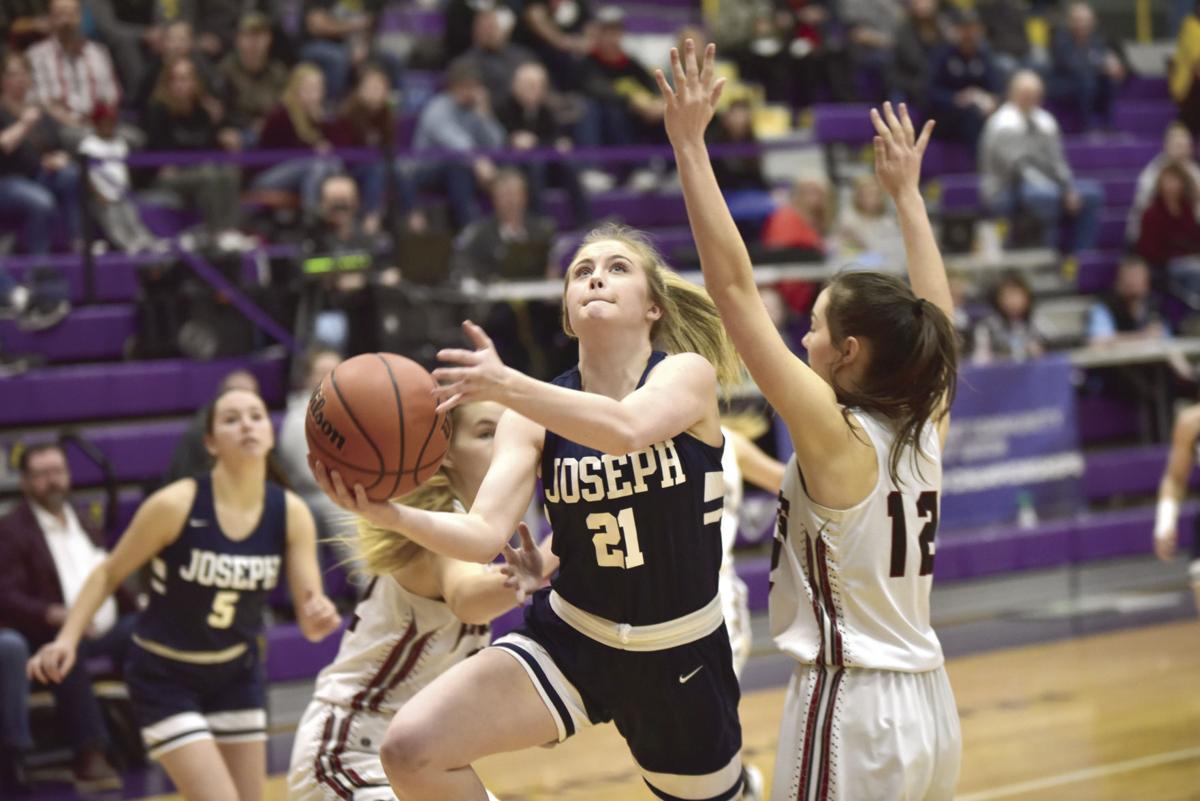 Joseph’s Sabrina Albee attempts a layup Saturday in the 1A third-place game against Perrydale. Albee scored 21 points, added four rebounds and four assists, but the Eagles fell to the Pirates, 56-39. 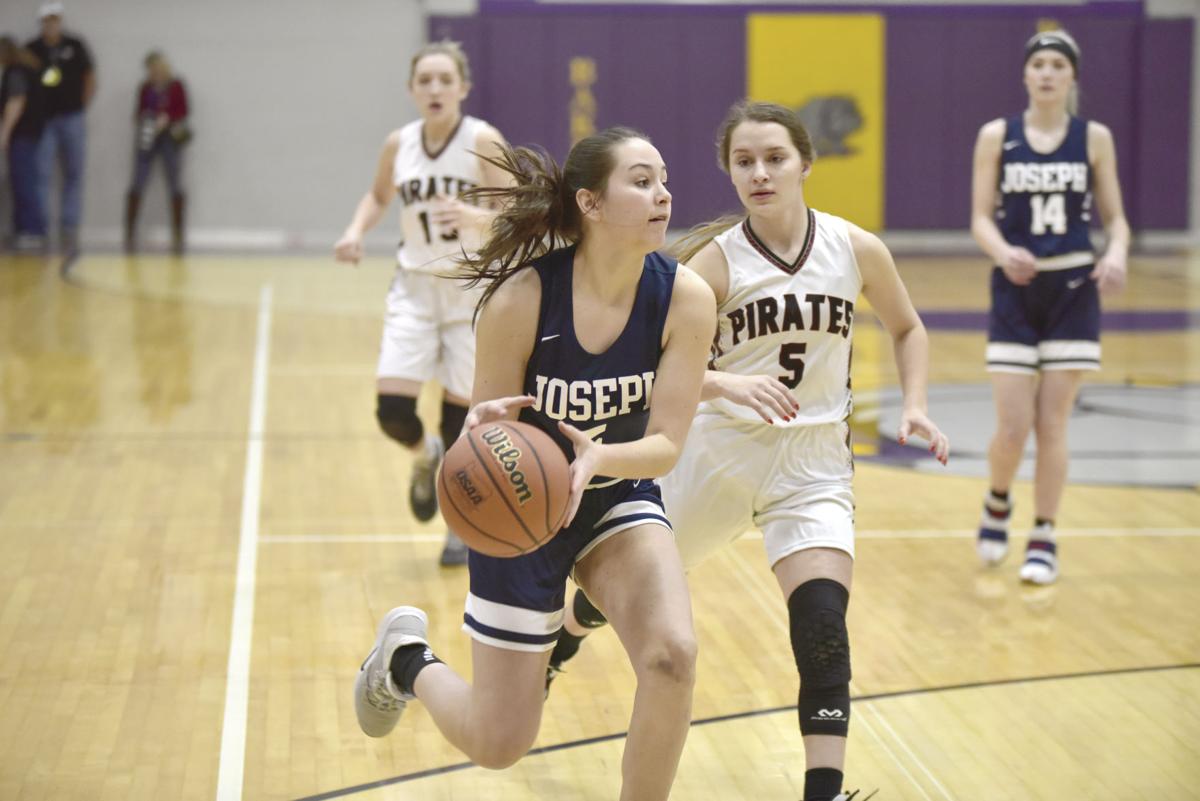 Joseph's Molly Curry looks for a teammate to pass to Saturday. 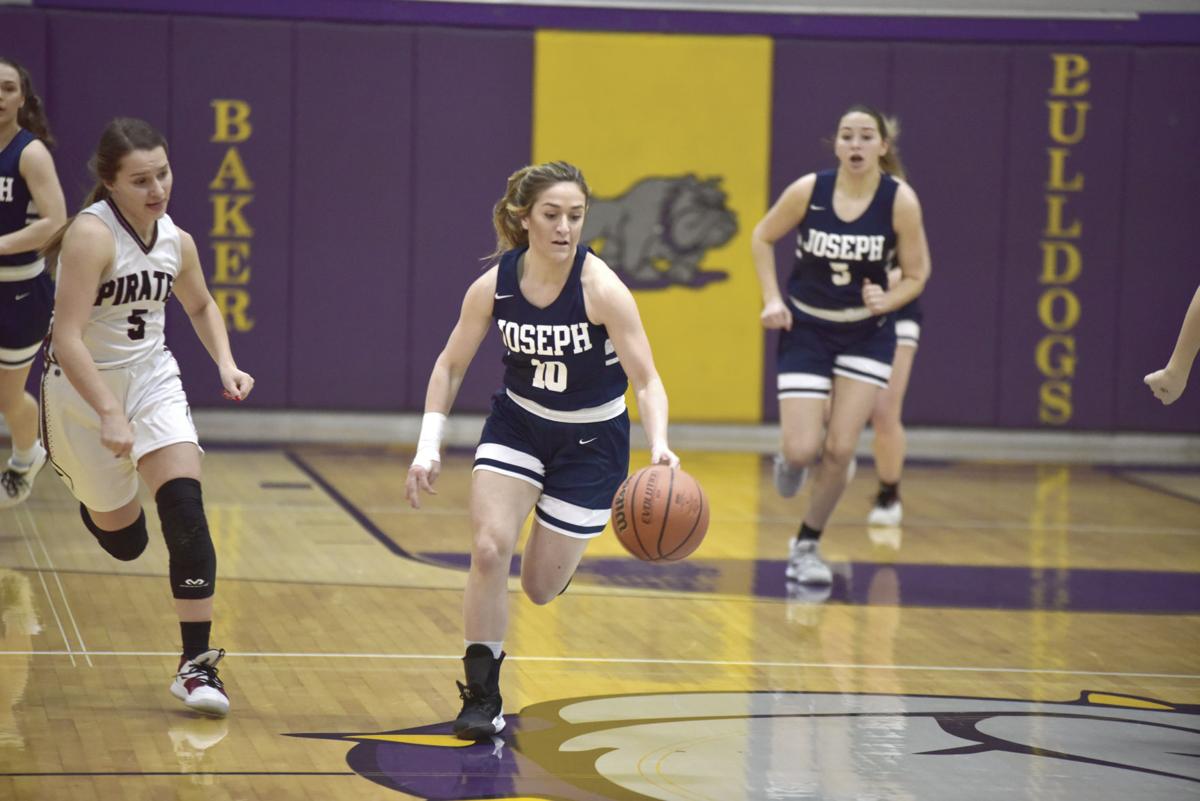 Joseph's Brianna Micka races up the court after collecting a steal Saturday against Perrydale. 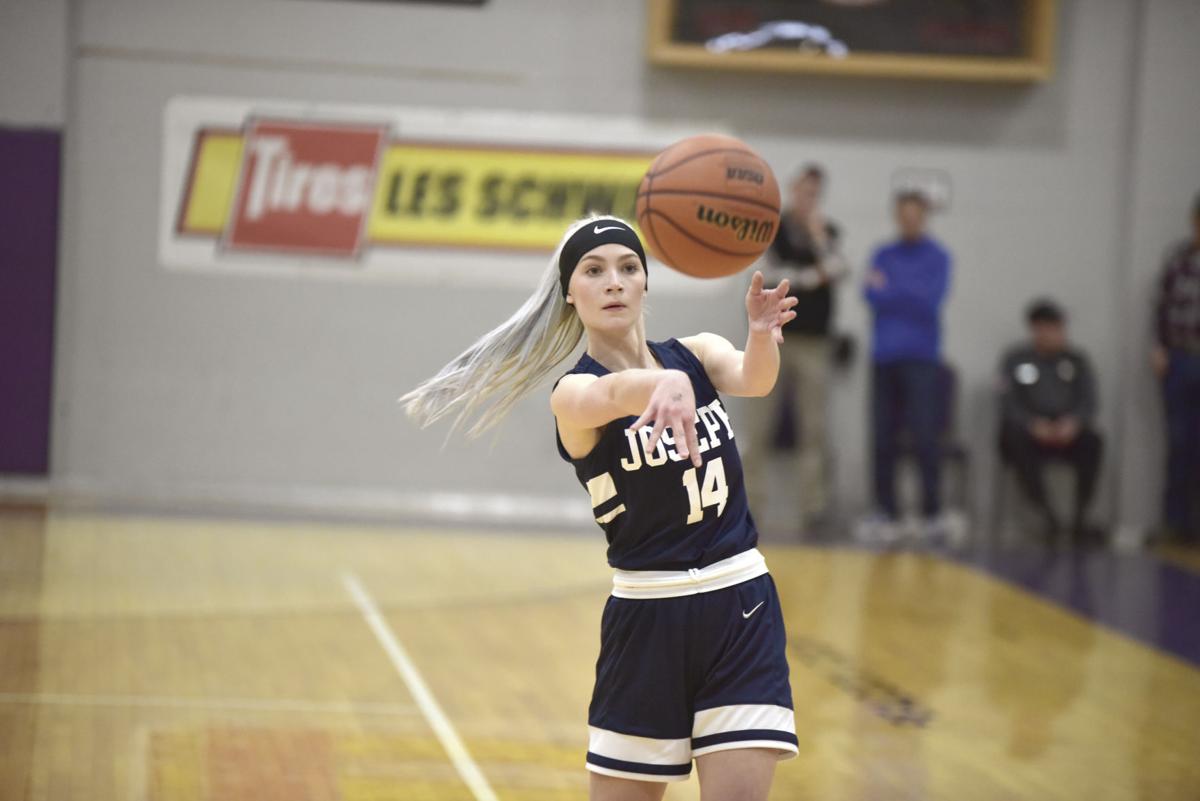 Joseph's Madelyn Nelson passes the ball to a teammate during Saturday's third-place game against Perrydale. 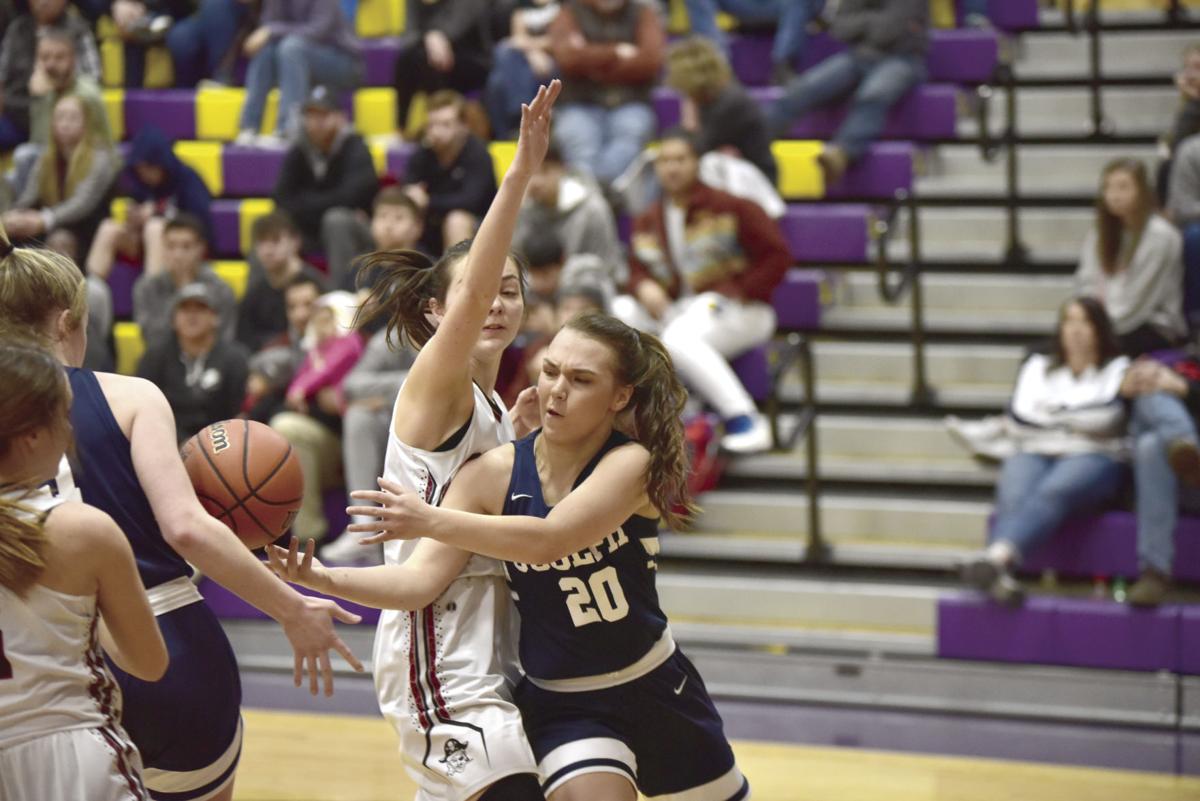 Joseph’s Camille Crenshaw, right, dumps a pass off to a teammate during the first half of Saturday’s third-place game against Perrydale.

Joseph’s Sabrina Albee attempts a layup Saturday in the 1A third-place game against Perrydale. Albee scored 21 points, added four rebounds and four assists, but the Eagles fell to the Pirates, 56-39.

Joseph's Molly Curry looks for a teammate to pass to Saturday.

Joseph's Brianna Micka races up the court after collecting a steal Saturday against Perrydale.

Joseph's Madelyn Nelson passes the ball to a teammate during Saturday's third-place game against Perrydale.

Joseph’s Camille Crenshaw, right, dumps a pass off to a teammate during the first half of Saturday’s third-place game against Perrydale.

BAKER CITY — Joseph ran into a Perrydale team Saturday in the third-place game that re-found its 3-point shooting touch and hassled the Eagles offensively, as a first-half surge by the Pirates gave them a lead they wouldn’t relinquish in a 56-39 win over Joseph despite a huge second half from Eagles’ star junior Sabrina Albee, who scored 21 points.

“Perrydale came out and played their game and got us out of our game,” Joseph head coach Lance Homan said. “Kudos to coach (Terry Newton) and the job he’s done there. They’re good. And we weren’t ready for it. I was proud to get it back to 10, 13, something like that. They had a ton of pride toward the end there.”

Joseph led most of the first quarter before a 3-point barrage — led by Perrydale’s Lawrence sisters — turned the game around. The trio hit all eight of Perrydale’s 3-pointers, including six in the first half, in a show Newton said is more typical of his team than the 3-for-17 effort it had in Friday’s semifinal loss to St. Paul.

Kenzy Lawrence hit a trey late in the first that gave the Pirates the lead for good at 7-6, and Sydney Lawrence opened the second with a 3 for a four-point lead. Albee scored midway through the second to keep the Eagles within two and end a field goal drought of seven minutes before the flurry started.

In the span of a minute, the Pirates stretched the lead from 12-10 to 21-10, with their full-court press causing turnovers by Joseph and Sydney Lawrence hitting two 3s around a trey from Cody Lawrence. Kenzy Lawrence hit the team’s sixth triple later to put the lead at 26-11 at the half.

“They really pressure up top, which (makes it) hard to get (the ball) down low, and we’re really small, so getting it down low is pretty hard,” Albee said. “They had some good defense.”

Albee found another gear in the second half, scoring 19 points after the break as she took control in an effort to get the team back in the game.

“We were struggling so much in the first half, I just (said) to myself, ‘I gotta take over and get my team back positive,’” she said. “The best way I can do that is lead.”

The junior, who said she leads best by example, set the tone in the third, going 4-for-4 with a pair of 3-pointers and scoring 10 points in spite of having a defender on her nonstop and being, oftentimes, double teamed.

“She’s one of the top five players in the state,” Newton said. “You gotta respect her.”

It didn’t matter what the defense did in the third, though. Newton even yelled to his team “Don’t let Albee shoot” during a possession midway through the third — right before she drove into the key and hit a runner.

“She brings a lot offensively, defensively, typically rebounds pretty well, and when she gets the ball for the most part, she’s very calming for us,” Homan said. “She got hurried up a few times today, but she’s special. And I think the biggest compliment is she’s so humble.”

“Honestly when she starts going off like that, it makes me really excited as a player with her, because I’m like, ‘OK here we go, we’re getting into the rhythm,’” the senior, who had seven points in the second half, said. “It’s funny, because I always stand under the basket when she shoots her 3s, always watch it go in, and it’s super motivational.”

Perrydale, though, had a response to every run, and at one point midway through the fourth extended the lead to 48-25 on a Kaylee Rosenbalm putback.

Joseph made one final rally when Crenshaw hit a 3-pointer and Albee scored seven in row  — including a 23-foot 3-pointer and a steal, layup and free throw — to get the deficit to 13 with 2:36 left, but the Eagles got no closer.

Joseph (22-8 overall) shot 42% for the contest, but was hurt by allowing 15 offensive rebounds by Perrydale and turning the ball over 23 times.

Even with back-to-back losses to end the season that dropped Joseph to fifth, its one that will be remembered because of the resilience the team showed, especially in the wake of the mid-January fire that damaged its gymnasium.

“We had a lot of adversity this year, had to overcome a lot, so even just being here is a really big deal for us,” Crenshaw said.